Not Gangnam's style: The kitsch and soul of Kim Jong-Un country

North Korean pop is a far cry from “Gangnam Style,” but it has a lot to say about a country we barely know 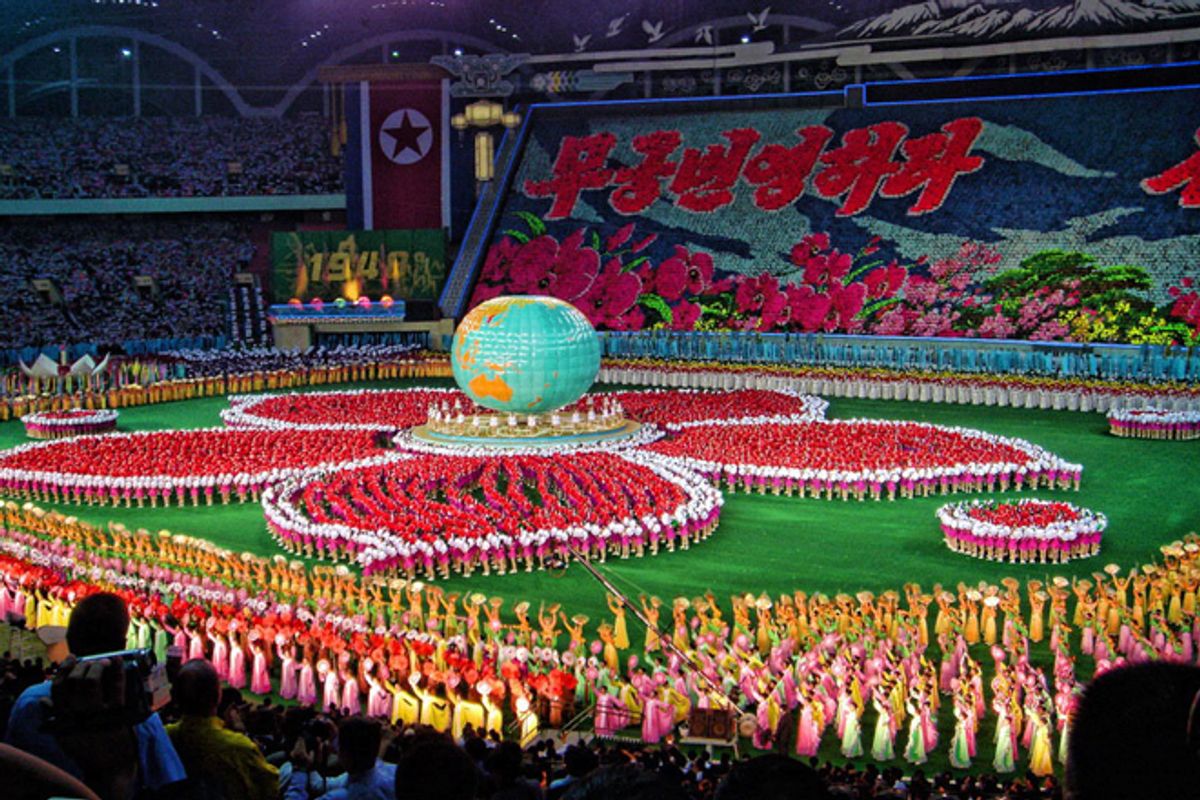 I was thinking about North Korea — officially, the Democratic People’s Republic of Korea — as South Korean megahit “Gangnam Style” made its rounds. Culture watchers have already dissected the video, pointing out that Gangnam is the wealthiest neighborhood in Seoul, the iconic showcase of South Korea’s rise. But people haven’t said much about the literal meaning of “Gangnam.” The word means “south of the river,” more precisely the Han River that runs across Seoul like an ugly, more turgid Seine. As K-pop rapper PSY's music video suggests, the southern half of the capital is ritzier and cooler than the northern half — a sad but accurate encapsulation of the Korean peninsula itself.

Though it’s easy to forget, North Korea, enemy land of dictators and famine, is separated from South Korea by a heavily militarized demilitarized zone (DMZ). It’s a new separation, historically speaking: a Cold War-era split imposed by world powers. Until that tragic division, Korea was one, with a unified music and culture. Today, although we hear more about the two Koreas' exchange of missile fire than cultural products, bootleg South Korean soap operas and pop songs have crossed the border, and North Korea has an extensive pop culture industry of its own. NK-pop is a far cry from “Gangnam Style,” but it still has a lot to say about a country we barely know.

A couple years ago, my friend introduced me to “Radio Pyongyang,” a mixtape-style CD released by the Sublime Frequencies label. It’s a humble disc — a short collection of collaged radio bits from the DPRK — but the synth-heavy pop songs opened a portal to an enigmatic world. Soon I began listening to all the North Korean pop I could get my hands on. Another friend traveled to Pyongyang and brought back a CD titled “Songs of the Enlightenment Period in Korea (1)” by the Pochonbo Electronic Ensemble, a state-run performing-arts troupe named after a 1937 raid on the Japanese by founding father Kim Il-Sung. Contrary to its nostalgic packaging, the CD has some catchy pop numbers. I tried to make my parents, immigrants from Seoul, listen and sing along. “Dated commie nonsense,” they called it.

True, NK-pop is a product of the state, accountable to a certain political and aesthetic vision. But the DPRK is hardly alone in manufacturing popular culture. South Korea's waifish, low-talent pop acts are often studio-conceived and -raised, and boy-band human assemblage à la the Monkees is common in the West. What's unique about NK-pop is its totalizing, faux-perfect vision. State-produced tunes are regularly scheduled, mandatory programming on the DPRK's univocal radio and TV.

To South Korean ears, NK-pop sounds like trot (teu-ro-teu), more commonly called bbongjjak or enka in Japan. This genre emerged in the 1950s, combining traditional Korean folk and Western popular music, especially the romantic ballad. It's characterized by sappy lyrics; a brisk, upbeat 4-4; nearly constant melisma in the vocals; and loud, synthetic instrumentation. Trot has persisted in the nostalgia of older Koreans and in the playful, revivalist versions of contemporary K-pop acts. Last year, bbongjjak old-timer Nam Jin, who's now in his mid-60s, performed to stadium-size crowds in Seoul to celebrate the forty-fifth anniversary of his debut.

NK-pop is a study in retrograde kitsch. The singers are usually women — their high-pitched voices thought better to convey the childlike purity of the North Korean “race.” In classic trot style, accompanied by accordion, guitar, drums and laser sounds, they vocalize with uncanny vigor, frozen smiles, heaven-tilted eyes and operatic vibrato. The style is inherited from indigenous singing traditions, except that these love songs address the regime. “Onwards Toward the Final Victory,” a song for the new leader Kim Jong-Un, was unveiled a few months ago.

Earlier this year, NK-pop made international news (sort of). Succeeding his deceased father, young President Kim Jong-Un was spotted about town with a beautiful mystery woman. She was initially thought to be Hyon Song-wol, a former Pochonbo singer. Although she turned out to be someone else entirely, it wouldn’t have been that shocking for the North Korean leader to be with a pop star. Because Pochonbo and other acts, like the Wangjaesan Light Music Band, are state bodies, their members are more Betsy Ross and John Philip Sousa than Lady Gaga.

The DPRK regime dictates that "the cultural arts should robustly support juche [self-reliance] and unwaveringly embody party ideology, the spirit of workers, and humanism," but I suspect North Koreans just want to be entertained. In the 1980s, trot-medley mixtapes leaked into North Korea through the Chinese border town of Yanbian, which remains a hot spot for culture and refugees. As traffic in illicit tapes, CDs, DVDs and digital files continues today, new musical forms and pop cultural artifacts slowly penetrate the DPRK's closed info loop.

In Under the Loving Care of the Fatherly Leader, journalist Bradley K. Martin recalls a 1989 visit to Pyongyang when rock-influenced NK-pop was still new. Although there were Korean-style noraebang (karaoke rooms) and dance clubs in the foreigners' quarter, ordinary DPRK residents had limited access to music from the outside (no Celine Dion to mimic). Young North Koreans craved a strong beat and, Martin writes, sought out the “rock music that foreigners were playing in and out of their high-rise lodgings.” Reading this passage, I imagined a group of uniformed students beneath a propped hotel window, dancing to windblown, imported rock ‘n’ roll. After all, dance and song — love ballads, trot and rock — are as important to life in North Korea as anywhere else.

A purely artistic, unmediated creation NK-pop is not — but pop rarely is. And for those of us on the outside looking in, North Korean tunes, however manufactured and schmaltzy, remind us of the DPRK’s vast humanity. NK-pop offers entry, a point of connection, and serves as an antidote to simplified Western news reports. There’s more to K-pop than “Gangnam Style,” and there’s more music to come from the dark of Pyongyang.

E. Tammy Kim lives in Brooklyn and writes about culture and politics. She is working on essays and visual art, and co-editing a book about world-music label Sublime Frequencies.