What defeat does to a party

Panicked conservatives are changing their tune on immigration, but the damage to their base may be permanent 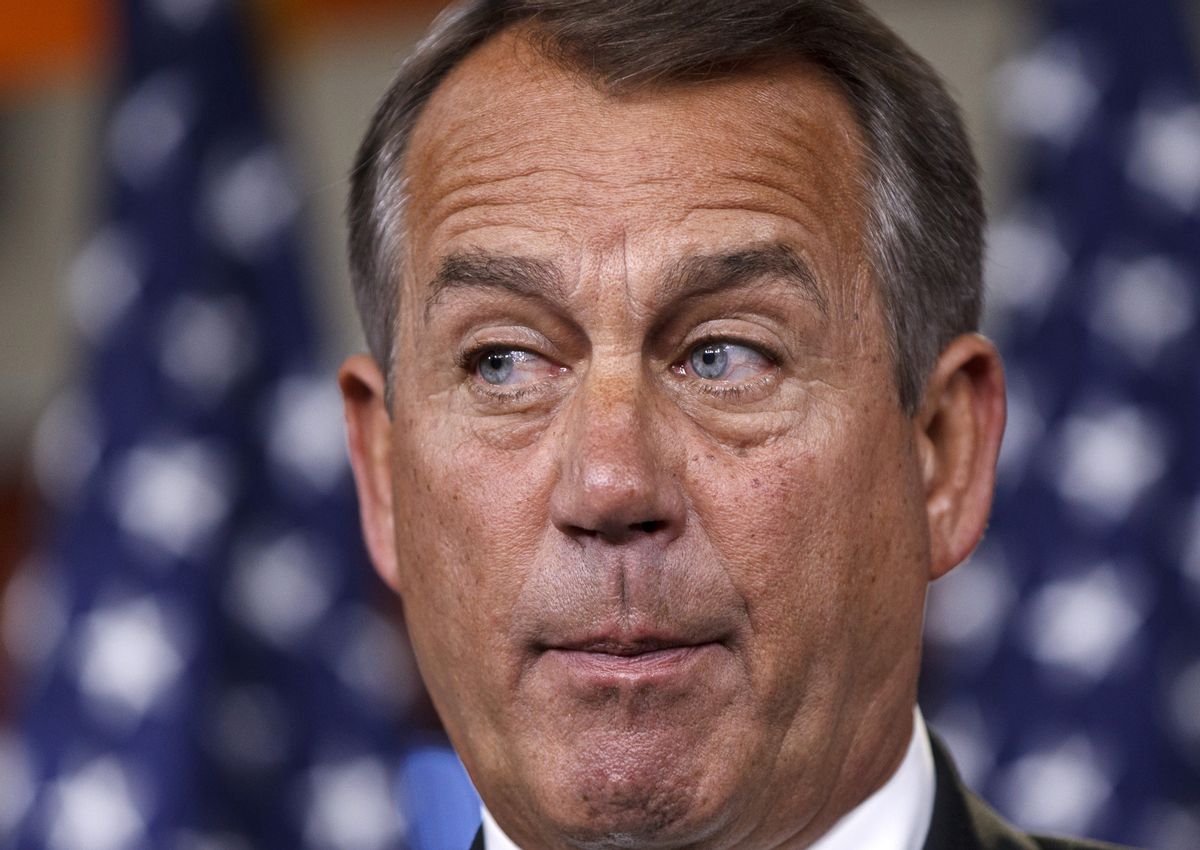 One of the most critical questions for the future of the Republican Party is whether and how it adjusts its posture toward Latinos in the years and decades ahead.

Since Tuesday, a number of prominent Republicans have spoken out to acknowledge what seems obvious: Surrendering 71 percent of the Latino vote to the Democrats cost them dearly this year and is utterly untenable moving forward.

House Speaker John Boehner became the latest to do so on Thursday, telling ABC’s Diane Sawyer that “I think what Republicans need to learn is – how do we speak to all Americans?  You know, not just to people who look like us and act like us, but how do we speak to all Americans?” Boehner then made news by expressing his desire to reach a bipartisan deal for comprehensive immigration.

“[W]hile I believe it’s important for us to secure our borders and to enforce our laws,” he said, “I think a comprehensive approach is long overdue, and I’m confident that the president, myself, others, can find the common ground to take care of this issue once and for all.

For the last half-decade or so, this kind of talk from a Republican leader has been grounds for an intraparty revolt. That Boehner, who has been very hesitant to say or do anything that puts him at odds with the Tea Party-era GOP base, feels safe saying this on national television is the clearest sign yet of how jarring Tuesday’s verdict was to the right.  And he’s not alone. On Thursday, Sean Hannity told his radio listeners that he now support a “pathway to citizenship” for law-abiding undocumented workers.

“We’ve got to get rid of the immigration issue altogether,” Hannity said.

This kind of talk was unthinkable before Tuesday. But even if prominent Republicans are now ready to junk their single-minded fixation on “amnesty” and line-up behind comprehensive reform, it doesn’t necessarily mean that reform will pass – or that the GOP’s Latino problem will go away.

Assuming the issue does come up in the next Congress, there will still be plenty of loud and influential nativist voices on the right fighting any deal and threatening to organize primary challenges against Republicans who don’t join them. This is what sunk the last push for reform, under George W. Bush back in 2006. Media personalities now play an outsize role in shaping the mood of the GOP base (and thus the GOP’s agenda and messaging), so it’s a hopeful sign that someone like Hannity is now changing his tune. If others like him do the same, it will bode well for a meaningful bipartisan deal in the near future. But the potential for primary-phobic Republican members to get cold feet will be a constant threat.

Even if Republicans do champion reform and even if it does become law, though, doesn’t necessarily mean the GOP’s demographic problem will be solved.

Certainly, there’s some reason for Republicans to be optimistic that the alienation of Latinos from their party isn’t permanent. After all, it was only eight years ago that Bush took 44 percent of the Latino vote. If the GOP, which took only 31 percent of the Latino vote in 2008 and 27 percent this year, could get back to that Bush level, it would be fine in the future. It could be that finally resolving the legal status of the undocumented and expunging words like “amnesty” and “illegals” from their rhetorical palette will allow Republicans to make a winning pitch to Latinos on economic and cultural issues.

But the problem may go deeper. The GOP’s opposition to reform since Bush’s plan blew up has been frenzied and unyielding, with very few dissenting voices speaking out. The lack of trust and ill will this has generated among Latinos is considerable and probably won’t go away overnight. There’s a broader issue too of the GOP’s tone toward Latinos and other minority groups. Sonia Sotomayor’s Supreme Court nomination had nothing to do with the immigration issue, but the right opposed her bitterly, with Rush Linbaugh likening her to David Duke and calling her a “reverse racist” and a “hack.” 31 Republican senators out of 40 voted against confirmation. Far too often in the Obama era, this ugly tone has defined the GOP’s posture toward Latinos and other demographic groups at the heart of Obama’s “coalition of the ascendant.”

To win over Latinos in large numbers, it will probably take more for Republicans than simply signing off on comprehensive immigration reform (though that’s surely a necessary first step). It will require the party to actively court Latinos, to speak specifically to issues of concern to Latino voters, and to drop the rhetoric of white guy resentment once and for all.

For the sake of their survival, Republicans can’t allow a repeat of what happened with their relationship with black voters. Hard as it is to believe now, the GOP was once the progressive party on race and the natural home for black voters. But that all changed in 1964, when a Democratic president, Lyndon Johnson, signed the Civil Rights Act and Republicans nominated a senator, Barry Goldwater, who had joined with southern Democrats in trying to filibuster it to death. That election pushed a huge number of white southerners into the Republican fold, and while the GOP never again fielded an anti-civil rights candidate, the party continued for decades to stoke the resentments of its growing white Southern base. The result: Since Goldwater, Democrats have carried at least 80 percent of the black vote – and often much more – in every national election.

For the first time in 2011, minority births outpaced white births. By the end of this decade, whites will no longer account for a majority of the population under 18, and by 2041 the entire country will be minority-majority. So if they don’t make serious inroads with Latinos, Republicans will become a permanent minority party.