Bill O'Reilly may have surrendered, but America's dangerous divisions go deeper than party, race or religion 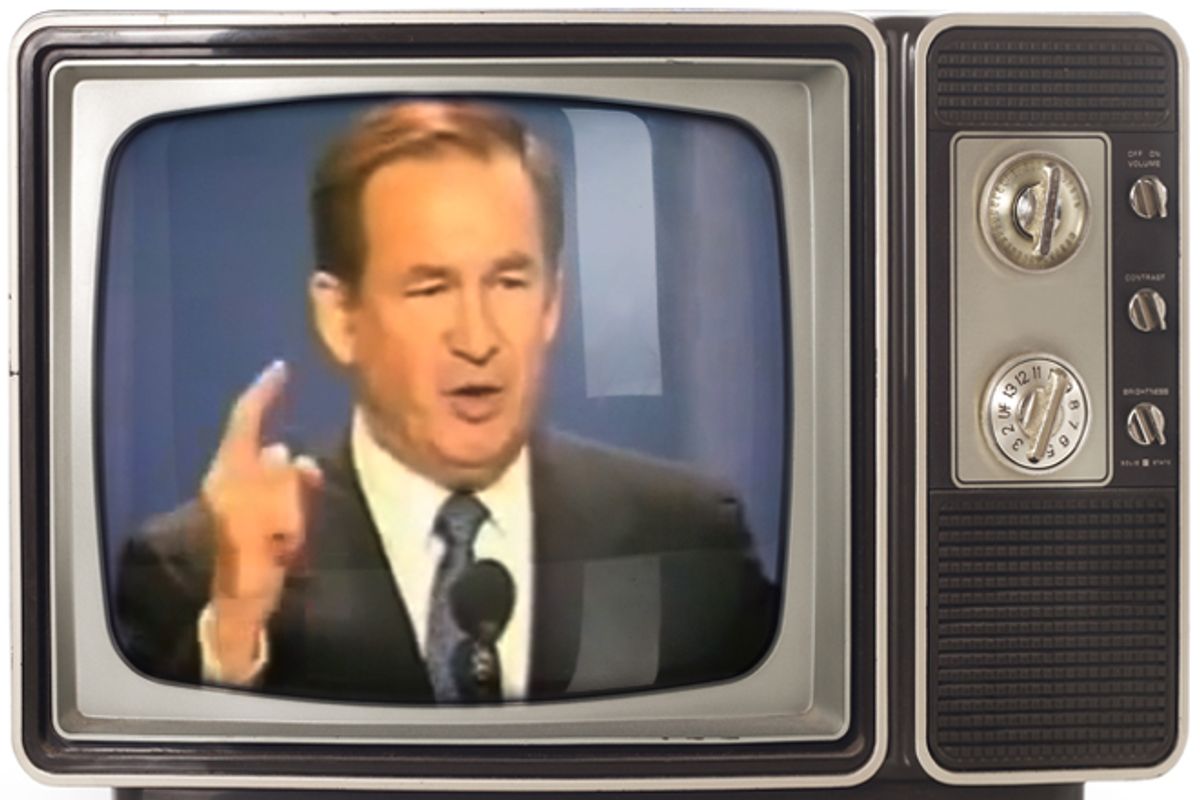 This may come as news to you, but our country is severely divided. Seriously, though: Tuesday’s election, in which 120 million voters were united only by the belief that the other side’s candidate was a nightmare, was only the most recent illustration of a profound cultural divide in American life that goes back at least 50 or 60 years (and arguably much longer). It’s a major talking point on cable news shows and in opinion columns of all stripes – yes, duh, mea culpa – one that has sparked the careers of numerous pundits and commentators.

David Brooks and Thomas Frank, to cite the obvious examples, have dined out for a decade or more on their purported ability to diagnose the worsening antagonism reflected in the 2012 election, when multicultural metropolitan elite groups on both coasts overwhelmingly voted for one candidate and lower-status white people in the middle of the country overwhelmingly voted for the other. Brooks has long specialized in boiling this down to pithy phrases: Volvos vs. F-150 pickups, Wal-Mart shoppers vs. Whole Foods shoppers, and so on. (As my wife recently observed, in today’s economy it could more accurately be put this way: the people who shop at Target vs. the other people who shop at Target.)

But if we think we can understand this division better by using cute demographic shorthand or by trying to claim that it’s fundamentally about religion or abortion or sexual morality or the role of government or whatever other hobbyhorse we choose to ride, we’re kidding ourselves. Those are significant issues that provoke strong feelings on both sides, to be sure, but I believe they are symbols or symptoms of division rather than its underlying causes. Any time we get fixated on the centrality of any one of those factors, we risk being left behind by the rushing river of history.

I recently came upon a column Pat Buchanan wrote back in April in which he argued that same-sex marriage would be the defining issue of the 2012 campaign and that Election Day was “shaping up as the Antietam of the culture war.” We’ll get back to Buchanan later -- he is a central figure in the history of cultural warfare -- but as is so often the case, he was right in an upside-down Bizarro World fashion. Gay marriage was a total non-issue in the campaign, and as every month passes, it becomes an ever-more-ordinary part of American life, roughly as exciting as the other kind of marriage. That in itself suggests that his turning-point analogy may be accurate but also that his side didn’t even show up to fight the battle. (If you need to go Google “Antietam” right now, I will join Buchanan in lamenting the failures of our educational system.)

It’s my premise that the division in America is indeed cultural in nature, using the Lévi-Strauss anthropological sense of that word, although other senses come into it, too. (The people who watch HBO, for example, or who saw “Moonrise Kingdom” and “Beasts of the Southern Wild” in theaters, fall overwhelmingly on one side.) Defining it as libertarian vs. communitarian, for instance, or as a religious view of society set against a more secular one always simplifies or overlooks some aspect of the problem. It involves values or mores that people hold on a primordial or unconscious level, which are not easily expressed in language and not readily subjected to rational inquiry. Translated into the political realm, these fundamental cultural mores become entrenched ideological positions, modes of expressing the unshakable conviction that my side is right and yours is wrong. It’s easy from there, when you’re convinced of your own righteousness, to tip over into paranoia or caricature: Obama’s a Muslim traitor, born in a Taliban test tube; the Republicans are gaming the voting machines, en route to a 1,000-year Fourth Reich.

If you’re warming up your emailing fingers to type the words “false equivalency,” give me a second here. I live in New York City in a neighborhood where Barack Obama got better than 90 percent of the vote, and I write for Salon. I’m not claiming some neutral position in the culture wars. That would be absurd. My own fundamental cultural precepts point toward the belief that one side descends from the Enlightenment, more or less, while the other traces its roots (again, more or less) back to the medieval Church. Of course, I believe that young-Earth creationists and climate-change deniers are dangerous nuts and that raising taxes on the rich is a moral imperative.

But part of that post-Enlightenment relativism, I guess, leads me to doubt that either side has a monopoly on truth and to suspect that my side, as well, has major cultural blind spots. On a more pragmatic level, the way these profound cultural differences get filtered into strident political disagreement is precisely the problem. We just had an election that was a de facto contest between America’s competing cultural factions, and one side won a narrow but decisive victory to the intense amazement and anger of the other. More name-calling isn’t going to help. If there were ever a moment to talk about this stuff dispassionately, this would be it.

My point is that we haven’t found ways of talking about this issue that go beyond buzzwords – the Cosmopolitans and the Heartlanders, or whatever terms David Brooks is peddling these days – and that address questions more meaningful than how to win elections. Thomas Frank is clearly right that the Republican Party has manipulated this cultural gulf to persuade working-class whites by the millions to vote against their own economic interests, and my Salon colleague Joan Walsh is correct that the Democrats can fight back, to some degree, by stressing economic populism. (Obama’s victory in Ohio, which left Karl Rove fuming and sputtering in disbelief, turned on that tactic.)

But the American division is not essentially about partisan politics or ideological labels, and it can only sometimes be reduced to questions of economic policy. It is sometimes but not always about racial resentment, sometimes but not always about the contested public role of Christianity, and often but not always about big words that are inherently squashy and subjective, like “patriotism” and “freedom.” One of the key concepts, to my mind, is what sociologists call the loss of “relative privilege.” Many white men perceive, correctly, that they have lost social status relative to women and minorities, especially when they compare themselves to their fathers and grandfathers, who benefited from white supremacy and male supremacy (whether or not they personally held racist or sexist views). But is that really the central issue or just the one that my own cultural and educational backgrounds point me toward? We have to be careful about forming conclusions when the evidence is so deeply buried.

You may have seen a video that made the rounds last weekend, including here on Salon, in which a lefty sandbagger type interviewed a bunch of white people at a Romney-Ryan rally in Ohio. They wore discount-store clothing and drove pickup trucks, and roughly 100 percent of them appeared to belong to the class most likely to suffer under a Republican budget-slashing regime. Hardly any could come up with coherent reasons for choosing Romney over Obama beyond a few Fox News talking points about nonexistent higher taxes and weak leadership and some free-floating paranoia. (One lady suggested that a drone had followed her from her front door to the rally; whether Obama was operating it personally remained unclear.)

I can’t speak to the intentions of the people who made the video, but on the Internet it became a source of ribaldry, an opportunity to mock the clueless rubes for their half-formed delusions, poor fashion sense and infelicity at crafting sound bites. I laughed too, and then I felt awful. Some of those people may be dumb, and others may be evil; you’ll find that in every cohort. But they’ve suffered from downward mobility for most of the last 40 years. While the educated elite in New York and San Francisco have sneered at their backward tastes and appetites, the captains of capital have crapped on their gimme caps and told them to like it. Because: America! Is it really surprising that they’ve anchored themselves to some sense of shared cultural identity, incoherent as it may be?

I was a young reporter on the floor of the Houston Astrodome during the Republican National Convention of 1992 when Pat Buchanan made his legendary speech about the “culture war” in America. As terrifying as that was to witness in person, surrounded by the bull-necked, crewcut-wearing young men of the Texas A&M cheering squad, I thought he was right at the time, and I still think so now. I don’t mean he was right on the issues (although let’s give him credit for opposing NAFTA way back when). I mean that he correctly observed that he and I were on different sides of a long-running conflict over what kind of country America was and how its citizens were to think about themselves.

Buchanan didn’t start that war. It goes clear back through the history of America, from Vietnam to the Red Scare to the Civil War to the Revolutionary War and the witch-hunting Puritans, and it has its origins, at least arguably, in the social revolutions of early modern Europe. He doesn’t have the power to end it, although his recent work tends toward elegiac pronouncements about “dying Christian America” and the end of Western culture, swamped by lesbians and Muslims and free government marijuana. (Bill O’Reilly’s election-night outburst about the death of “traditional America” and the eclipse of the “white establishment” was nothing more than warmed-over Buchananism.)

Maybe the fact that the Christian-Caucasian-libertarian-capitalist-nationalist cultural faction has absorbed another bitter political defeat will spark some new dynamic in American life. But I wouldn’t bet on it. An angry, declining minority that believes itself oppressed can be an unstable and dangerous phenomenon. The worst sin of the secular-multicultural-communitarian-internationalist-environmentalist faction (other than all that oaky California chardonnay) is its smugness and superiority, its sense of historical mission and its confidence that it has nothing to learn from its diminished opponents and bears no responsibility for their plight. Pride goeth before the fall, as a text prized by both sides for different reasons puts it. If we can’t find a way to address the American cultural divide, beyond insults and quadrennial beauty contests, it is sure to destroy us.