Don't celebrate yet: From global warming to the fiscal cliff, the left will need to fight to keep Obama accountable 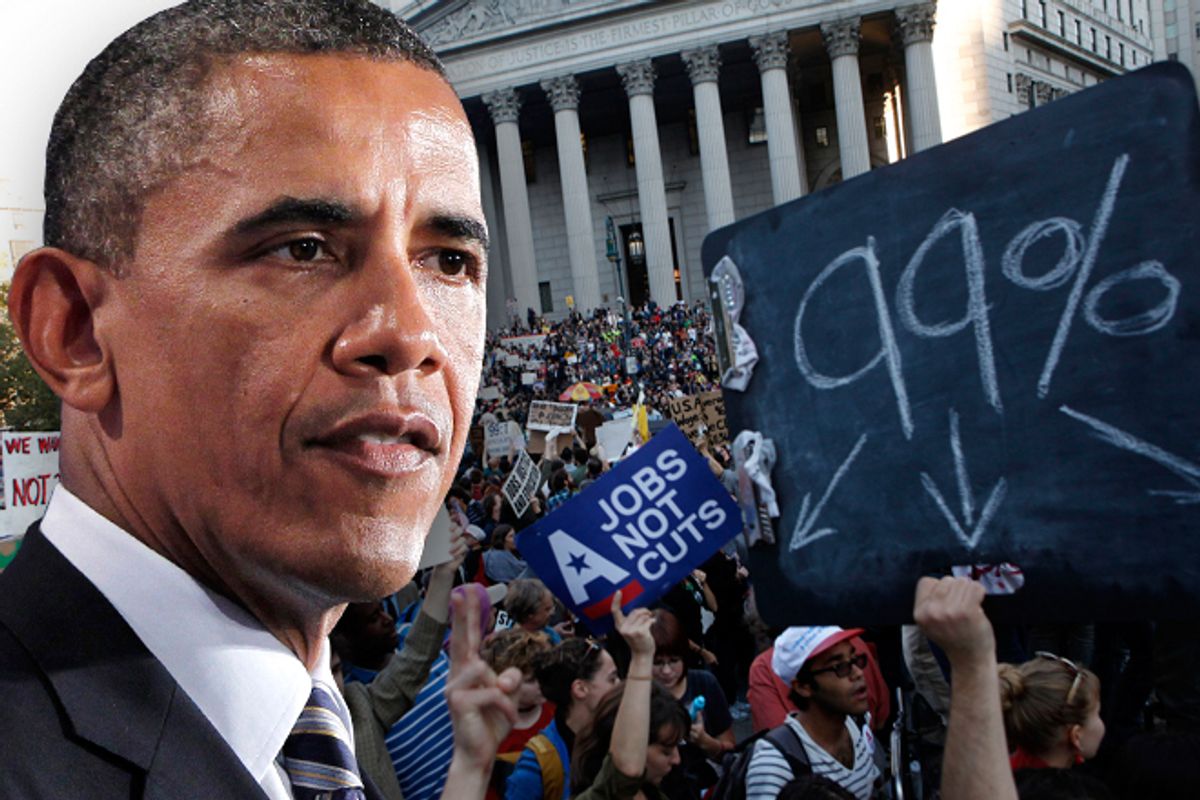 Every election is historic because history keeps moving no matter what we do. What truly defines an election as important is not the vote totals but the fight over the narrative that comes immediately after the outcome. These narratives are essentially stories told by various representatives of interest groups on television and in newspapers to justify their preferred policies.

Here's what we do know: Obama won a very close election with lower voter turnout than 2008 and a much more slender margin of victory. Democrats kept the Senate with a slightly more liberal caucus, and Republicans kept the House. Those are the facts.

There are two narratives being told about what happened: One, Obama won this with a savvy, data-driven reelection campaign and a bare-bones, if effective, first term of policymaking; two, this election represents the rise of a left-wing, black, brown and young America, an America opposed to rampant inequality and racism.

These two narratives have important differences. The first implies a continuation of the centrist policies and rising inequality of Obama's first term. The second implies a sharp left turn on policymaking.

So which one will triumph? My bet is that Obama will continue the policy framework he pursued in his first term. But this will play out with a series of struggles over political power. This is a list of some of the possible domestic flash points we could see in the next year as the agenda of term two is defined.

Fiscal Cliff, Budget: Much ink has already been spilled over this possible fight. In his first term, Obama already offered cuts to Medicare and Social Security to get a debt deal done. Obama has demanded the wealthy pay a bit more in taxes, with the House Republicans remaining unwilling to compromise on that point. The endpoint Obama seeks is one in which entitlements are reformed (which is to say, cut), the wealthy pay a bit more in taxes, and government spending continues its slow glide downward. This stance is opposed by stakeholders who worked to get Obama re-elected, such as the AFL-CIO. In addition, the budget will have substantial impacts on how Obamacare and the healthcare exchanges mandated in the law are implemented.

The stock market has plunged substantially since the election, reflecting the views of Wall Street speculators who think there's a chance that there will be no deal and the country will go over the cliff. One strong possibility is kicking the can, or passing a resolution to put the decision off for six months to a year pending more negotiation.

Global Warming: Over the past four years, the landscape of environmental activism has undergone a quiet transformation. New, aggressive groups like 350.org and Forecast the Facts have begun pushing traditional, conservation-minded institutions like the Sierra Club to become more radical in their aims. Forecast the Facts and Friends of the Earth ran a campaign called "End the Climate Silence" to push Romney and Obama on global warming, and then Sandy pushed the issue to the forefront of the campaign. Sandy brought global warming to the city that houses the largest number of billionaires and media companies in the world, prompting Michael Bloomberg to endorse Obama on the eve of the election.

The issue isn't going away. The EPA is gearing up to write rules regulating coal plants, which could essentially end coal in America. Flood insurance is a below-the-radar but extremely important federal program that could become a focal point of the global-warming fight. Meanwhile, new hydrocarbon sources such as tar sands -- which dump far more carbon into the atmosphere than does traditional oil - are under attack. 350.org is organizing a protest in front of the White House on November 18 to demand that Obama reject the construction of the Keystone pipeline. This pipeline is intended to carry oil from tar sands. These groups will use protests, direct action and civil disobedience to push what they see as a life-or-death issue. Where will the administration come down?

Fannie/Freddie/Foreclosures: For the past six years, a brutal foreclosure crisis has rewritten what it means to be an American, with effective homeownership rates dropping to levels last seen in the 1960s. Despite a series of bailouts, loan modification programs and the Dodd-Frank financial reform package, this problem has barely been addressed. Americans are still out between 5 and 7 trillion dollars of home equity, with millions of foreclosures on the way. Fully 99 percent of the mortgage market is still backed by the government, and Fannie and Freddie (government-sponsored enterprises) are still run by the government.

Restructuring Fannie and Freddie, or eliminating them, would be an incredibly costly, difficult and complex undertaking. Fixing the private mortgage market is politically challenging and would require going up against the big banks. Outgoing Treasury Secretary Tim Geithner's strategy has been to protect the capital structure of the big banks at all costs and to oppose writing down debt for homeowners. With Geithner gone, there is the possibility that this could change.

The Obama administration promised liberal interest groups that it would fire the official in charge of Fannie and Freddie -- Ed DeMarco -- and appoint someone willing to write down mortgage debt for homeowners. Such a move would cost anywhere from 300 to 700 billion dollars, depending on how far the administration is willing to go to right the housing market. Is a plan to restructure the housing market really on the table?

Dodd-Frank: The biggest institutional change wrought by Dodd-Frank was the Consumer Financial Protection Bureau. Since Elizabeth Warren is now a senator and Obama won reelection, it's unlikely that the CFPB will be changed in any significant way for the next two years. Aside from that, Dodd-Frank mandated that various regulatory agencies write new rules for the financial system. How these rules are written is largely up to the next treasury secretary. Should this person put focus on tax/budget issues, as is likely, then Dodd-Frank implementation will happen at the staff level, without significant political capital invested. As a former high-level administration official told me, this "will make it easier for the big banks and players to manipulate and control the process."

Marijuana: Both Colorado and Washington have legalized recreational use of marijuana, attempting to structure and regulate a legal pot industry. This puts the states at odds with the federal government. The Department of Justice has already said that it sees no change in its approach to marijuana, despite Obama's promise in 2008 to forego targeting of medicinal marijuana facilities. How will the administration come down in this clear conflict with a liberal popular majority on the drug war?

Trade and the Trans-Pacific Partnership: One of the sleeper issues in the cycle was trade. The Obama administration has pushed a new NAFTA-style trade deal called the "Trans-Pacific Partnership," which faces substantial opposition within the Democratic caucus. New Sens. Maize Hirono and Heidi Heitkamp have come out against NAFTA-style trade deals. And Sens. Sherrod Brown and Jon Tester, with their strong records of opposing these kinds of deals, were just reelected. The proponents of the TPP are the people that spent massive amounts of money to defeat Obama, like the U.S. Chamber of Commerce. Will Obama push this deal through anyway?

Immigration, Race to the Top, Strikes: There are plenty of other areas where the liberal base and the Obama administration might be at odds. The administration is seeking a comprehensive immigration package, with the Latino vote clearly in mind. Obama failed on this objective in his first term, but implemented some parts of it through executive orders near the election. How far will he push that package this term? Will he settle for more entry visas for highly educated workers?

Teachers unions came out big for the Obama reelection campaign; nonetheless, it's likely that the administration will double-down on its commitment to the teacher union–busting package known as Race to the Top. Given the massive strike by the Chicago Teachers Union, this is a powerful point of disagreement. Meanwhile, with a strike by Wal-Mart workers looming on Black Friday and increasing unrest among workers in the U.S., other labor conflict could come to the fore. Will Obama fulfill his first-term pledge to put his "walking shoes" on? He didn't do that in Wisconsin when Gov. Scott Walker removed collective bargaining rights from public workers.

The Post-Election Narrative: These are just a few of the possible areas of conflict, and how these conflicts are resolved or sidestepped will determine what this election was about. The elections of 1932 and 1936 were considered realigning elections, as were the elections of 1980 and 1984. But that's not due to vote margin. It's because Franklin Delano Roosevelt had his 100 days and implemented the New Deal, while Ronald Reagan immediately crushed the air traffic controllers and began the work of undoing the New Deal. George W. Bush took office in 2000 with what one might argue was a legalized coup, and he won a narrow election in 2004. Despite this lack of a mandate, he organized America's transformation into a state dominated by the War on Terror.

Had these politicians operated differently, the electoral narratives would have sounded very different. So don't pay attention to what is being said on TV about why Obama won a second term. All we know is that he did. What that term means has to do with the policy fights ahead.