Is Taylor Swift being taken too seriously?

The last decade produced enough pop trash to fill a landfill. Which may be why we're so eager for Swift to be great 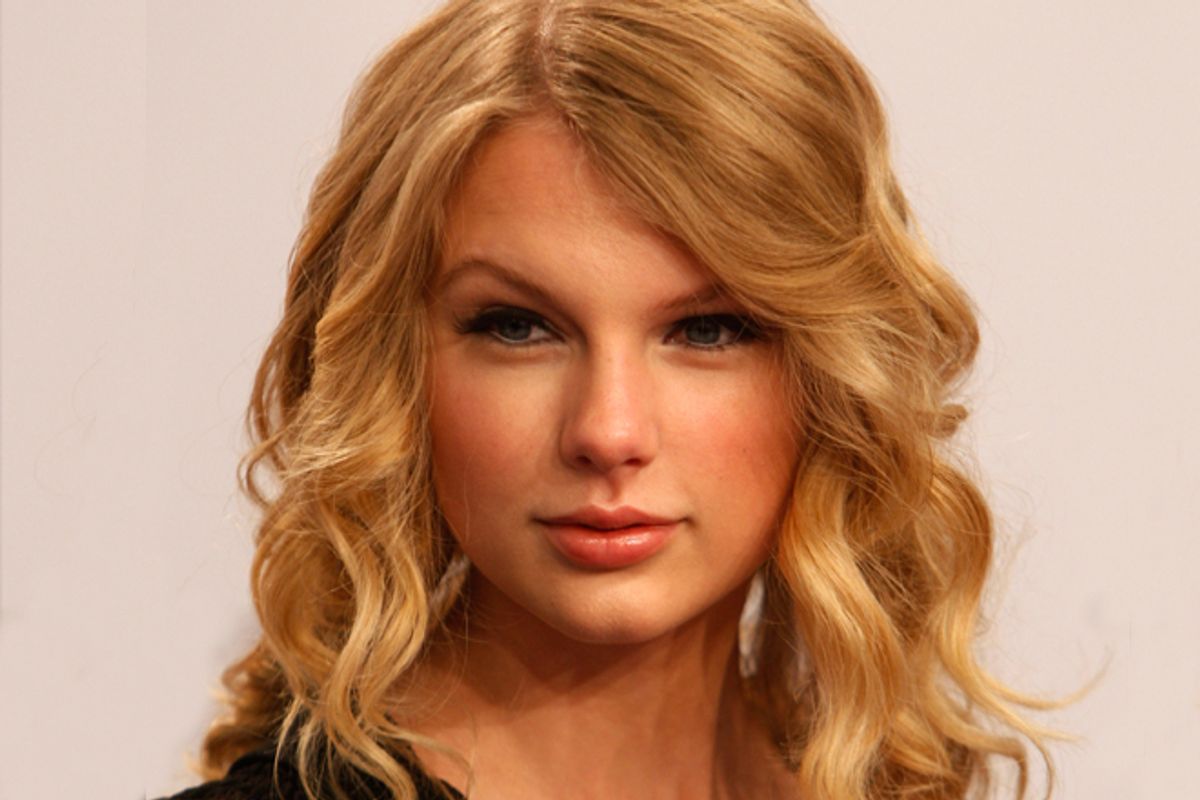 Pop stars tasked to deliver adolescent angst have rarely been so subdued as Taylor Swift. She is 22 and last month sold 1.2 million copies of her new album in its first seven days of release, an occurrence as rare in the faltering music business as a comet in the night sky.

That Swift defies the current economic model of selling music is not a surprise since she is a star made for this post-recession era of staycations, “Downton Abbey” and Prius sports wagons. Like any pop singer, she mirrors her time, and lucky for her, she didn’t emerge during the economic prosperity of the post-9/11 era when McMansions lined Heartland cornfields, weapons of terror were to be found in the desert and Arnold Schwarzenegger stumped for Hummer. As is known to any market research analyst, we aren’t rewinding to those halcyon days and our current “new normal” means downsized sales expectations in almost every market sector, especially cars, real estate, tourism. Which means the raised metric for pop longevity is demure thoughtfulness, not tacky opulence.

The indulgence of last decade produced enough pop trash to fill a trailer park in East Peoria: Britney Spears, Christina Aguilera, Ashley Simpson, Jessica Simpson, Mandy Moore, Kelly Osbourne, Avril Lavigne, Hilary Duff and even back benchers t.A.T.u, M2M, Hoku, Skye Sweetnam, Brooke Allison, Willa Ford and many others. The hubris was so high, record contracts were even slung to professional partygoers Paris Hilton and Lindsay Lohan, who were both paid more for their brand than they were for whatever babble they purred into a microphone.

Today, most of these former lip-syncing product pushers are hovering on either side of age 30 and already long past their expiration date, leaving reality television and game shows the only shelves that will hold the weight of their baggage. Time is always a cruel leveler, but what is more telling from the last decade is the overnight rejection of so many of its key touchstones, from Britney Spears to George W. Bush, the tramp stamp to the luxury SUV, rap-rock to screamo, the Osbournes to the Palins.

“Red" (Big Machine), Swift’s fourth album released three weeks ago, is a beneficiary of our lowered expectations from the Bush years. Swift is certainly a more dedicated songwriter and skilled singer than her counterparts from a few years back, but the emotional twists inside her new songs still feel strategized rather than mined from a deeper place. The critical reverence shown to her since the album’s release has positioned her music within the grand tradition of confessional women songwriters — Lucinda Williams, Joni Mitchell, Carly Simon — but comparisons like those might be too convenient. The early work of that crew revealed poetic flashes of anger, sadness and deadly wit, and always with the sense these singers carried a worldly weight on their backs and were using their music to lighten their load. Swift is many times removed from that approach — blame it on getting your first record contract when you’re 16, for starters. Despite how well crafted or brightly produced, these songs are brimming with attitude, but it serves to create distance. We never connect to the real person in the song doing the emoting, which is the goal of any music made for adults by adults. Since the ultimate goal of “Red” is to get adults to buy it for themselves, and not their kids, that’s a problem.

Which isn’t to say “Red” is not destined to become her biggest seller. After all, she got this far because she conveys the perfect characteristics for a pop star in an economic downturn: modesty and austerity.

Like shaking off a bad dream, the economic collapse four years ago created a strong public desire to forget much of everything associated from that time, which was not so long ago but today feels like an eternity. The collective craving for cultural amnesia blunted many career trajectories and forced immediate shifts in political and commercial narratives. Sideshow attractions like Honey Boo Boo and Todd Akin will continue to tick across the landscape, but it’s unlikely their brand of bunkum will gain the prominence it might have just a few years ago, due to the increased media proliferation that will usher them to niche corners, and a public tolerance for diversions that appears to be approaching full tilt.

Call it good timing but Swift managed to gracefully lift her porcelain legs over the pop music pile-up of last decade to design a career that appears to have nowhere to go but forward. Her breakthrough second album “Fearless” (Big Machine) made her a household name, filled her shelves with industry awards and generated sales approaching 10 million copies.

That album arrived in late 2008, just months following the stock market collapse, a summer when $4 per gallon gas prices forced the automotive industry to seek federal bailouts and the steady climb of real estate foreclosures that have not yet been abated. What followed became a public preoccupation with the financial services industry, equitable tax rates and codes, trickle-down economics, debt ceilings, unemployment and other Wall Street/Main Street discrepancies that forced a cultural reassessment of who we are and where we are heading.

In the pop world that same year, Swift personified the kind of star who just might jump at the chance of a staycation. Unlike her predecessors who were subsequently falling off the pop radar, she didn’t need to make a requisite virgin promise that would ultimately crumble; her appeal emerged more as a confident big sister than strip mall jailbait. One song off the album, “Fifteen,” targets girls of that age, suggesting, “When you're fifteen and your first kiss/Makes your head spin ‘round/But in your life you'll do things greater than/Dating the boy on the football team.”

Restraint is not often a message you hear a pop star pushing on their fans, but it resonated with parents who were trying to show the same self-control with their family budgets. Swift’s real life poise complimented the crossover appeal of her tuneful roots-pop sound. Both inside and outside the music was a star embraced for her reliability, especially at a time the sky was falling.

How deep an impact Swift’s moderate pop sensibilities was making was evident in 2009 when Kanye West stole her trophy moment at the MTV Video Music Awards and subsequently took a public flogging that forced him to later apologize. That image — her mute, him blabbering — illustrated the quiet tidal shift taking place and it’s not inconsequential that West, once one of the most respected figures of conscious hip-hop, is now is relegated to the sidelines as a celebrity windbag.

“Red” arrives serendipitously: timed for release weeks before the presidential election, with enough sweeping drama in it to match the magnitude of the season. The album is a game-changer in moving her beyond the clichés of mainstream country and across darker pop borders. Other singers who earn their spoils mining mallrat lust for years appear lost once their audience walked off the dance floor and onto a stage where life gets complicated. Swift doesn’t have that dilemma, for her, adulthood is starting to suit her.

That “Red” is intended as a transitional album is made clear by the chiming guitars of opener “State of Grace” reminiscent of U2, and later, by songs that cover the gamut, including glam-pop, piano ballads and Americana. There’s a lot to like in this ambitious and very tuneful collection, made certain through writing collaborations with song sprucing by an A-list team: Semisonic’s Dan Wilson, Marvelous 3’s Butch Walker, Max Martin and Shellback (Katy Perry, Maroon 5, Britney Spears) and Jacknife Lee (U2, R.E.M.). Duets with Brits Gary Lightbody of Snow Patrol and Ed Sheeran burn with heartache.

Swift earns sole writing credit for nine of the album’s 16 songs and she moves the short distance between lovelorn and defiant. She also possesses the self-awareness that her music may not be taken as seriously as her indie counterparts: “It feels like a perfect night/to dress up like hipsters/and make fun of our exes,” she sings, and elsewhere accuses an ex that he will likely “hide away and find (his) peace of mind/with some indie record that’s much cooler than mine.”

True, it’s difficult to be cool when still having to produce Disney-tailored slams like the hit “We Are Never Ever Getting Back Together,” which crowbars the phrase “like, ever” into the song to parrot teenage authenticity — a “conversational” bridge finds Taylor talking with her BFFs and dropping the L-bomb five times in 10 seconds.

That moment could be the greatest reveal of “Red”: Even when Swift tries to be her most natural, the calculation shows. She may be praised as the apex pop star of her generation, but that reflects how tight our comfort zone has shrunk — just like our wallets — these last few years. Instead of singers who might leave our scars exposed, we cling to the ones who are CoverGirl-ready and know how to touch them up.