After facing overwhelmingly negative reactions, the publication pulled the poll, saying it was "in poor taste" 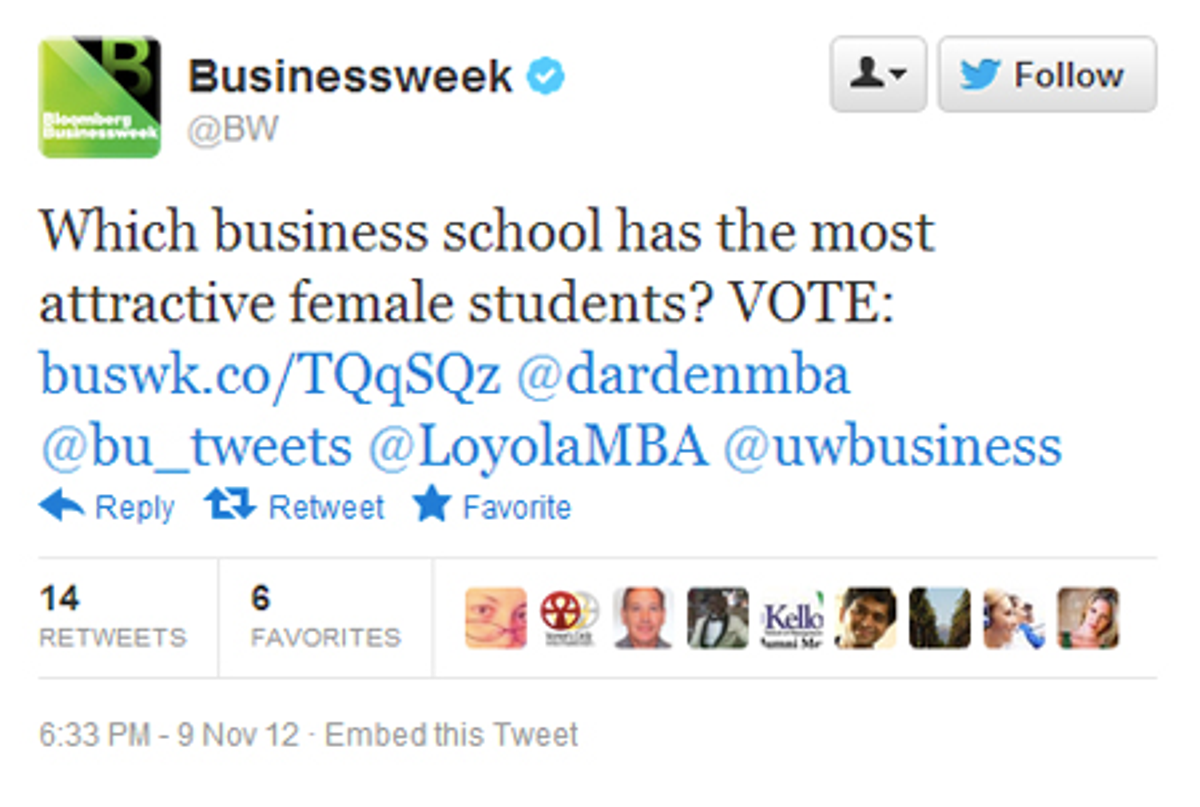 On Friday, Nov. 9, Businessweek asked its Twitter followers to vote on "Which business school has the most attractive female students." Predictably, readers found the tweet and the poll it linked to offensive. Writer Shelby Knox replied with sarcasm: "Do women go to B-School to run companies, be on boards? Hell no! For the pleasure of male students," while Jamil Smith admonished Businessweek, writing, "You'd think @BW would be above chauvinist crap like this, or should want to be."

But, as Daily Dot's Aja Romano points out, this is not the first year that Businessweek has issued polls rating the attractiveness of students:

In 2009, Businessweek published an article called “Campus Life: A Report Card.” “It's important to understand what the universities that house the top business programs are really like,” claimed the article. The next year, they repeated the article, this time with a slide show purporting to list the “Fifty Colleges with the Hottest Guys, Girls, and Nightlife.” And by 2011, they were confident enough to declare it a yearly event.

So why is it causing such a stir in 2012? Romano postulates that the GOP's "war on women," which brought women's reproductive rights to the forefront of the 2012 election, made readers much more aware of content objectifying women. And it certainly doesn't help that this year Businessweek made the "hotness of female students" the main focus of a tweet and of an article, displacing it from any larger context (or guise, depending on how you look at it) of nightlife.

Businessweek has since removed the offensive tweet and poll. After the Daily Dot first reported the story, Businessweek sent them the following statement:

"We regret issuing two online polls last week that asked our readers to comment on which business schools have the most attractive male and female students. The Face/Off polls have been taken down from businessweek.com. They were in poor taste and undermine the tremendous value our Business Schools vertical provides."