If the GOP liberalized a generation of voters, not even another Bush might be able to save them 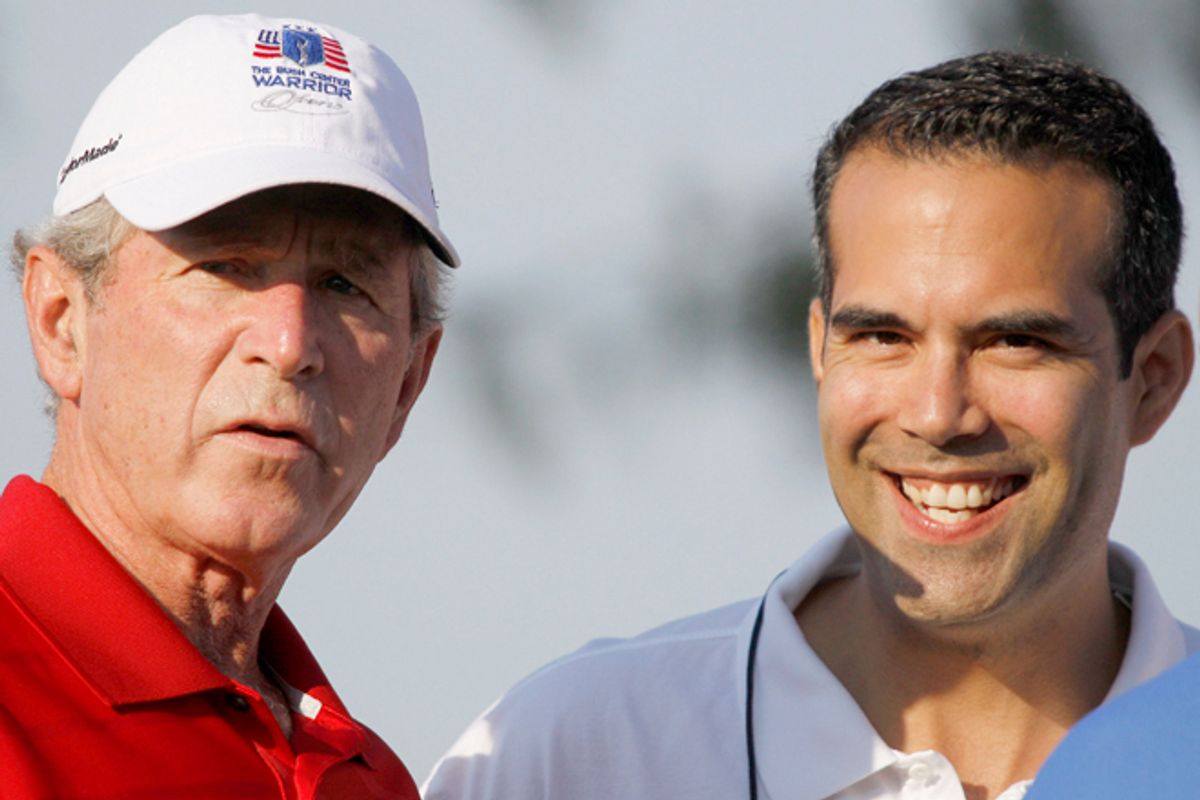 George P. Bush -- the handsome one with the Mexican immigrant mother -- is going to run for something in Texas, the official "second home" of the Bush family. He filed papers to run for office last Thursday, though he did not say which office. The New York Times thinks state land commissioner or attorney general, either of which could be a stepping stone to the governor's mansion. Fox News Latino is straight trolling with its headline, "George P. Bush Begins Road to the White House."

This was long in the cards. Bush went to Yale and did his requisite military service; while he curiously didn't join the forces until he was already 30, Bush did actually serve for a while overseas, putting him in the top tier of Bushes. He married young and has worked in mostly respectable fields. He is largely "outside" the public eye but involved in Texas Republican politics. Mark McKinnon jokingly refers to George P. Bush as "47," as in the 47th president. (After Bush, Obama, Jeb Bush, and Chelsea Clinton. Then after George P. Bush is Malia.)

The hope, and it's a semi-credible one, is that politicians like Bush -- moderate by modern standards, and Latino -- will help the Republican Party expand its current, shrinking coalition beyond ... older white men. It was long thought, by people like Karl Rove, that Hispanics would naturally fit right into the GOP coalition, in part because by and large they're religious and "socially conservative." Of course, another American minority that's by and large religious and socially conservative is African-Americans, who have no interest in the Republican Party. That's what happens when you make your party synonymous with xenophobic white populism. (Plus, Republicans tend to forget that many people in these groups attend religious institutions that are more likely to emphasize social justice than white evangelical churches, which have for the most part adapted their theology to fit into far-right Republican economic orthodoxy.)

The Republican nominating process will remain unkind to moderates, especially moderates on immigration policy, for years to come, but Bush has one advantage over his would-be "moderate" rivals for a hypothetical future nomination: He is a Bush. In a few years a Bush might be in the same position as Richard Nixon in 1968, when he was the one man who could unite the then-warring liberal/Rockefeller and conservative/Goldwater wings of his party.

There was honestly never much of a reason to expect that Hispanic American voters -- a diffuse group of lots of very different types of voters -- would end up voting as a bloc. But then the Republican Party started encouraging and explicitly campaigning on nativism and ferocious white racial resentments, instead of merely profiting from them. In doing so, Republicans might have served to make the non-white portion of the country liberal for a generation at least, which would be a major problem. Many Latino voters who've now voted for Democrats multiple times since the end of the Bush era may just consider themselves Democrats. In that case, neither tokenism nor moderating on one issue will be enough to shake many Latino voters loose from the Obama coalition. When you identify with a party, you tend to bring yourself into agreement with most of its positions, which is why people who vote primarily according to their belief that abortion should be illegal also more often than not support supply-side economics.

If that's the case, if the Tea Party and Sheriff Joe have Liberalized a generation of Latino voters, the Republican Party's demographics problem will not be fixed simply by embracing individuals like Marco Rubio, who share the same batshit beliefs as the party. (Nominating a white guy did not win the former Confederacy for Democrats in 2004.) But it also might not help that much to nominate a guy like George P. Bush, who merely subscribes to most of the beliefs of modern conservatism. It could take years, and a series of Democratic missteps, to erase the damage done in the last few elections.

Another factor that might be a problem for George P. Bush is that hopefully Americans will never again elect a Bush, but I don't know that I'd put money on it. One of Obama's greatest accomplishments was breaking the "Bush, Clinton, Bush," cycle of presidents before another Clinton got in, but he may have only delayed the inevitable. Eventually Bush's future son George Walker Pierce Lauren Nugent Bush will also run for president to avenge whatever disasters await his father in office. (War with Mars.)

In the meantime, let us never forget Pierce Bush, the Greatest Bush of All.