Time to commence "the Obama Games"!

Dear Mr. President: A Hunger Games-style event would be your legacy. America needs this -- and so do you 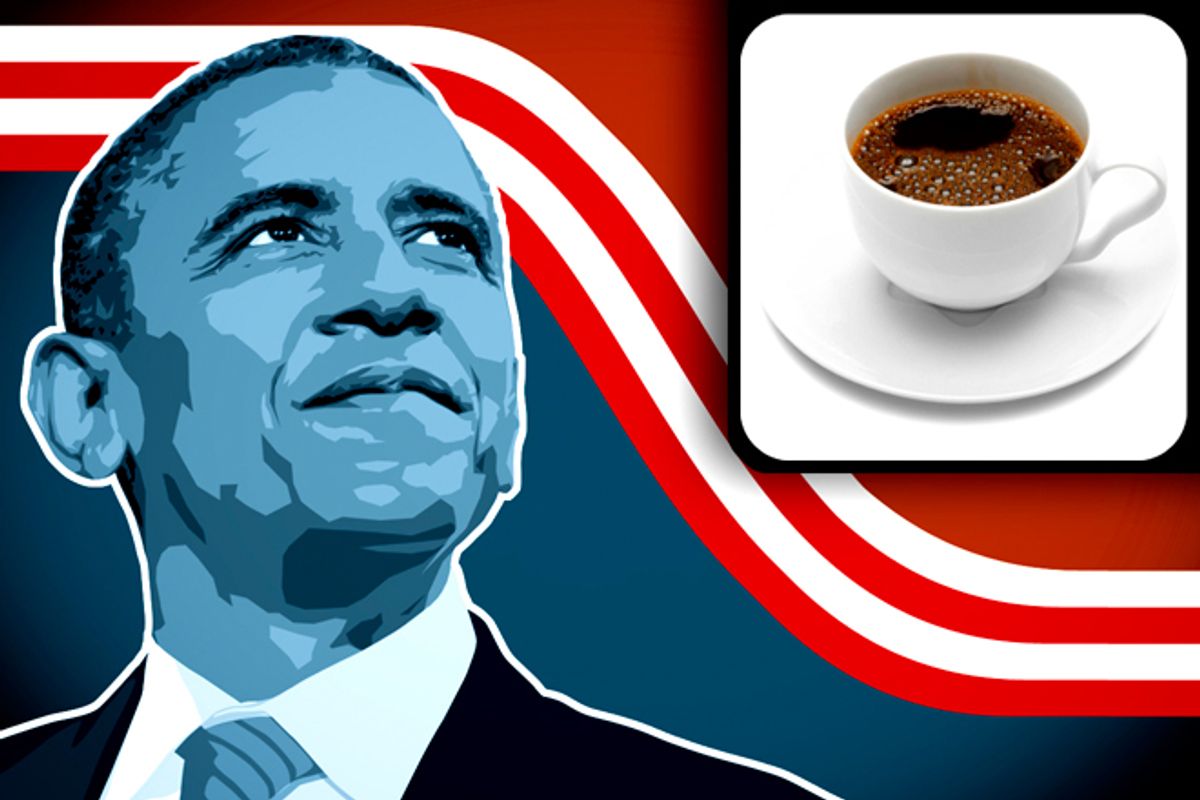 Overview
Congratulations! Big fan. Look, I know you're busy. The fiscal cliff, Afghanistan, your recipes Pinterest, immigration, climate change, walking Bo -- we get it, you've got a lot on your mind. We're completely behind you. Solving America's tough problems will take months of hard work, though, and we need something from you right now. When I say "instant," you say "gratification." Instant! (I'm going to assume you said it.) We've been glued to this election for over two years -- nervously vibrating to a wobbly pitch of hope and fear. We need to come down, and not all of us live in Colorado. While you're facing all of our challenges, we're suffering a crippling intellectual and emotional attention deficit left behind by the election. I have an idea. Hear me out, because I made a few jokes on Twitter that obviously turned the election in your favor so I think you owe me. I see you nodding. I propose you give the people the Obama Games: a Hunger Games themed event that would satisfy our need for nationwide entertainment while at the same time righting some pretty serious wrongs. We need this so bad, Mr. President. There's no more election to watch. "Breaking Bad," "Game of Thrones" and "Mad Men" are on break. C'mon, we're dying out here. I know what you're thinking: You are against state-sponsored killing except when it's unmanned from above. I get it. That's why I'm proposing that the Obama Games participants deserve death for the most part like the people on your list. I've created 12 categories to match the number of districts in Hunger Games. You could substitute your own, but that would be like criticizing me and we don't want that. No one wants that. Let's do this, Mr. President!

• The 'ers
We've had it with people who stubbornly cling to false truths. I'm talking here about those who have built their lives around irrational belief systems: Birthers, Deniers, 9/11 Truthers, Beliebers. Let's get them out there with loincloths, sticks, and shivs and see what happens. They are already organized into tribes and are huge drama kings and queens, so this isn't a huge stretch. They will like this! The Beliebers are heavy favorites to win it all. They're scrappy.

• The very serious people who ruined the economy
It's a shame we didn't have effective laws in place to hold accountable the greedy robber barons who crashed the world economy and shattered millions of lives. This is the beauty of your Obama Games, Sir! Dodd-Frank was good, but crossbow justice is so much easier to understand and appreciate. I don't like financial executives' chances against some of the other Districts. Those Armani suits are beautiful, but it's hard to run fast in them. Something tells me they will make an early and extremely popular exit.

• People who slow down as they yield onto the interstate instead of speeding up
You are trying to get into a line of traffic that is going faster. Stop slowing down! What is wrong with you people? Sorry. I get emotional about this, Sir. I know maybe they don't deserve to die, but I have some real rage for these people and I'm going to ask you to throw me a bone here. Sooner or later they are going to Darwin themselves, we both know this.

• Small government fascists
Those who simultaneously rail against the size and scope of government while advocating legislation to protect their marriage from the way others express intimacy will fight to survive in your games, Sir. They will defend the sanctity of their lifestyle in glorious fashion on the battlefield. I actually think they will like this, as their real-life advocacy is not much more than a form of fantasy role-playing against make-believe enemies.

• Pundits and flacks and hacks, oh my!
I'm going to make this real simple for you, Sir. Everyone on this list needs to be in pelts and war paint fighting for their lives. This will be the most popular thing you ever do in your career and you will be loved for all generations for making it happen.

• Real quiet kind of weird guys who keep to themselves and have middle names of Wayne, Lee or Ray
Enough with the mass shootings. It's horrible and tragic and totally out of control. Enacting sensible gun laws would, of course, be the best thing to prevent this but since there is too much NRA money raining from the D.C. sky, that's not possible. Instead, let's level with each other: Most gunmen fit the description of this category. Let's save ourselves a whole lot of time and blah-blah-blah due process and get them out there in your Games. They'll love it, trust me. This is win-win.

• School mascots in uniform
I know they didn't do anything wrong but they are so hilarious with their huge heads that we have to include them for entertainment value. I'm sure we're bombing or detaining some innocent people, so don't get all self-righteous on me here. You know it will be so hysterical when Sparty takes an arrow to the chest and falls down with that gigantic head wobbling back and forth.

• Attention junkies
Not gonna lie, this is a category I created solely in order to put Donald Trump in it. I could try to justify it by including Snooki and the Kardashians, but why be dishonest? I want to see Trump out there fighting for his life and we both know he'll be the first to get scalped and then we'll all finally get to see what was up there on that dome and that will be that, Amen.

• People who feel they have to constantly tell you about their gluten-free diet or P90X workout routine
I'm happy for you. I really am. You've got something going that is working for you and that's great. But you couldn't just let it go at that and simply won't stop proselytizing about it. Now, you will defend it and yourself on the field of the Obama Games. This will be very popular, Sir.

• Gaffefrican-Americans
One thing I learned from the election is that people love gaffes! The media is obsessed with reporting them. The people are obsessed with being outraged over them. Guess what? In your Obama Games, the residents of Gaffeghanistan will be held accountable with their very lives! Exciting!

• Nancy Grace
This is a personal request. It's a personality thing. Just do this for me, Sir. Please. I don't ask much of you. I need this. America needs this.

I left out Morning People. Perhaps you could take care of them by covert action. Thanks in advance. The Obama Games will be your legacy along with Obamacare and smacking that fly, Sir. You will forever be remembered and loved for this. If you agree and feel like you want to make me ambassador to somewhere tropical, that is totally up to you. Your call. Again, congratulations.

@pourmecoffee is the pseudonymous handle of one Salon's favorite Twitter personalities, a member of our Politics Twitter 50.