Time to march on Washington again for jobs and freedom 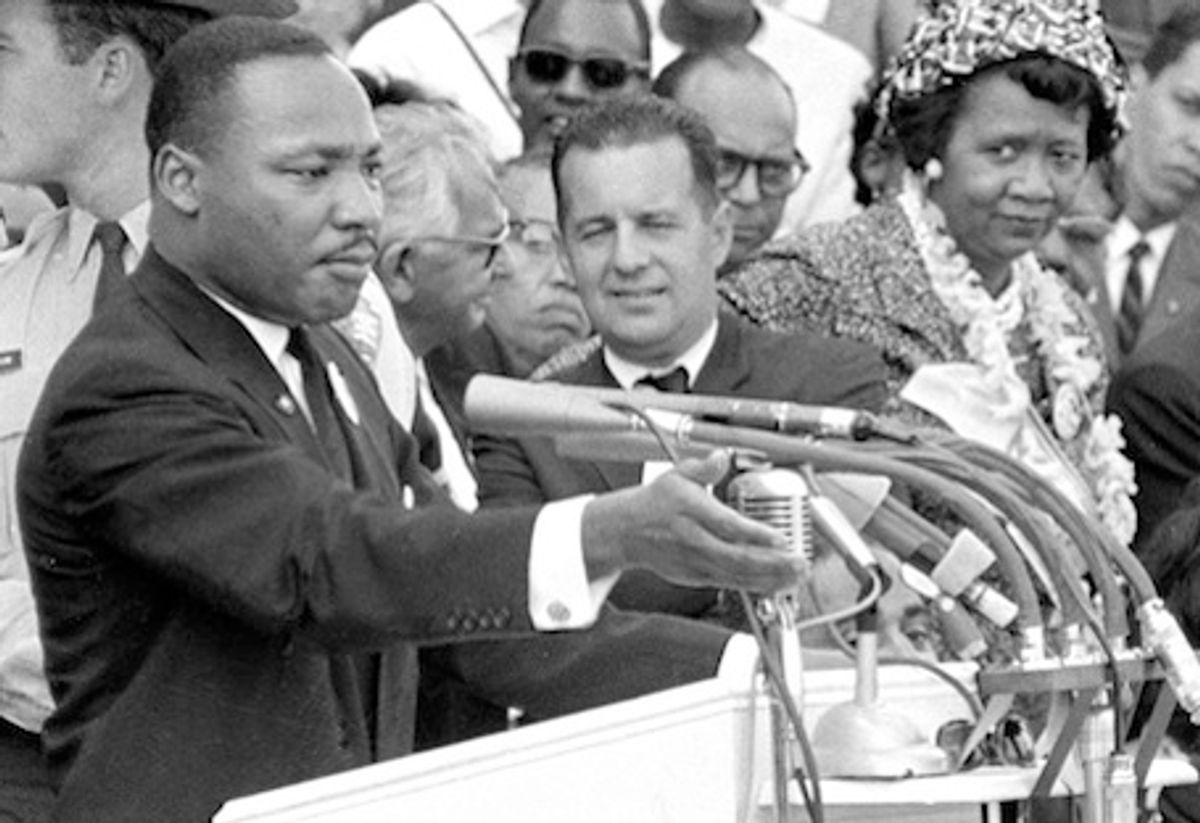 Next year will mark the 50th anniversary of the  March on Washington for Jobs and Freedom. Rallied by the great black union leader  A. Philip Randolph, the president of the Brotherhood of Sleeping Car Porters, with the assistance of civil rights organizer Bayard Rustin and UAW president  Walter Reuther, 250,000 Americans of every color and creed turned out on the National Mall on August 28, 1963 to demonstrate their support for guaranteeing equal rights and affording “life, liberty, and the pursuit of happiness” to all Americans.  And it is a day that generations will forever remember because of the words spoken on the steps of the Lincoln Memorial by the  Reverend Martin Luther King, Jr.:  “I have a dream.”

No doubt plans are already underway to commemorate that event.  But we who believe in America’s purpose and promise of extending and deepening freedom, equality, and democracy must do more than commemorate it.  We must truly honor it.  And to do that, we cannot wait until August, 2013.

We need to not just recall but actually redeem the progressive spirit and vision of Randolph, Rustin, Reuther, and King.  We need to march.

Randolph first developed the idea of a March on Washington in the spring of 1941.  Inspired to act by President Franklin Roosevelt’s State of the Union Address proclaiming the Four Freedoms -- Freedom of speech and expression, Freedom of worship, Freedom from want, Freedom from fear -- Randolph and his union brothers mobilized African Americans across the country in preparation for a march on the nation’s capital, where they would demand the opening up of America’s expanding war industries to black workers.

It was a march that never took place. But the mobilization worked.  The very prospect of an event that, as Randolph told FDR, promised to bring 100,000 blacks to a still-segregated Washington D.C., compelled the President – who, Randolph came to believe, actually welcomed the push – to bypass a congress dominated by a conservative coalition of Republicans and southern Democrats and issue an executive order commanding the desegregation of the war plants.

Randolph, however, did not give up the idea of the March.  And 22 years later, once again seeking to make a Democratic president do the right thing, he revived the March on Washington movement; and this time, an unprecedented grand coalition of rights, religious, and labor groups staged the historic gathering.

Historians tell us that the March, while a magnificent event, didn't work; that Kennedy hesitated and congress delayed.  But the scholars miss the point.  The American people were moved, and though Kennedy was assassinated that November, his presidential successor Lyndon Johnson was even more determined to act.  And empowered by courageous non-violent protestors, a generation of Americans who now recognized what America’s promise demanded, and a series of AFL-CIO lobbying campaign, the new secured the enactment of the Civil Rights Act, the Voting Rights Act, the Economic Opportunity Act, and the expansion of Social Security to include Medicare and Medicaid.

After more than thirty years of subordinating the public good to corporate priorities and private greed, of subjecting ourselves to widening inequality and intensifying insecurities, of allowing our industries and infrastructure to decay, of suffering culture wars and right-wing initiatives to roll back the rights that generations of Americans fought to secure – indeed, of denying our own democratic memories, impulses, and yearnings – we need to march.

Sadly, we need to march because we did not march before.

In 2008, we elected a president who reminded us all that “Yes, We Can.”  And in the face of the worst economic crisis since the Great Depression, much was done -- albeit, as we well know, not enough.  And because we left the public square vacant and public debate to be managed by TV talking heads and beltway pundits, a Tea Party movement emerged that propelled the GOP to huge victories in 2010 – victories that allowed the right and conservative rich to continue to pursue both culture wars and -- yes, I will say it -- class war from above.  Indeed, they proceeded to not only block critical legislative initiatives in Washington, but also pass laws at the state level that abolished workers’ rights, laid siege to women’s rights, licensed the harassment of people of color, and made it difficult for too many folks to exercise the fundamental right of voting.

Brother Trumka, we need to stage a new March on Washington. Now especially.

Voting last week, we expressed our determination to not only defend what our grandparents, parents, and we ourselves have accomplished, but also renew the march of freedom.  And yet, only days later we hear talk of  “grand bargains” in which House Republicans will agree way to raise taxes on the rich and the President and Democrats will make “necessary” cuts to “entitlements.”

We need to march.  As you  said on November 8th: “Working people – union and non-union alike – say NO to cuts to Social Security, Medicare and Medicaid and YES to fair taxes on the wealthiest 2 percent.”

But we need to march not just to say No.

We need to march to strengthen the will of the president and prevent him from once again deferring to congressional conservatives.  We need to march to bolster our liberal and progressive representatives in their efforts to resist the pressure to compromise.  And we need to march to encourage and mobilize our fellow citizens to not only demand what the majority of them voted for, but also to turn out in even greater numbers in 2014 to make sure we get it.

So, Brother Trumka, rally the union movement, gather up a new progressive coalition of rights, religious, and labor groups, of Americans in all their diversity, of Americans who want to not simply defend but democratically advance the promise of the Four Freedoms that inspired Randolph and the dream which sustained King.  It is time to march.