Progressives get ready to push the president

They'd rather fight for Obama, but if the White House wobbles on entitlements, expect "a huge backlash" 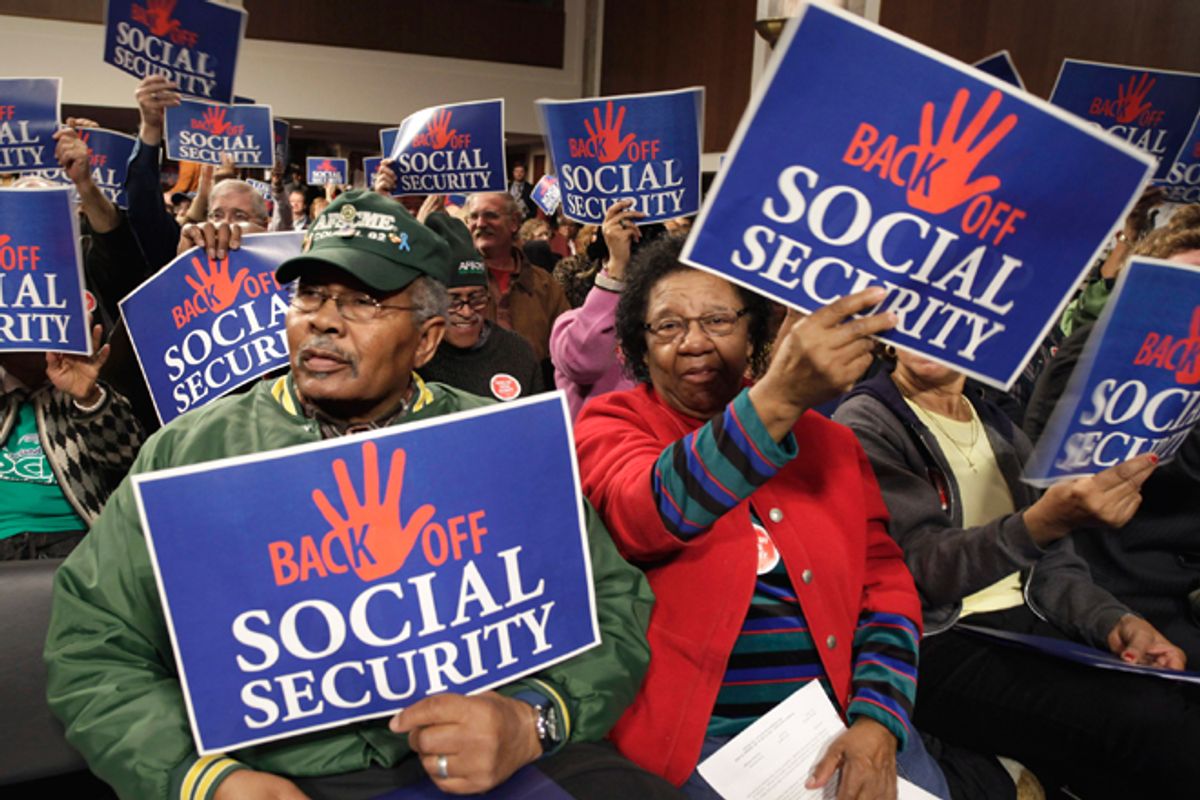 Fears that liberal disaffection would hurt Obama at the polls proved groundless last week when the Democratic base came out in force. But Obama's honeymoon with the left may not last long.

The top priority for Congress as it reconvenes this week is to deal with the so-called fiscal cliff, and progressives are worried that Obama and congressional Democrats may agree to a “grand bargain” that includes cuts to social safety net programs, especially Social Security, Medicare and Medicaid, or gives a tax break to the wealthy.

Progressive activists are now preparing to turn the firepower they marshaled to reelect the president against him if he looks like he's backing down on his mandate, as they see it, to preserve the social safety net and raise taxes on the wealthy.

“Our members are really really fired up to fight alongside of him and fight Republicans who are holding the economy hostage,” Ilya Sheyman of MoveOn.org told Salon. “But at the same time, it is also true that we have a very clear bright line from our members on Social Security and Medicare. That’s the top priority for our membership and we’re staying fully mobilized.”

Hoping to avoid a fight, the White House invited the leaders of the biggest labor unions and major liberal groups to meet with the president today. “I’m really hoping that the president listens more than he talks at the meeting today and truly understands how fierce the opposition to these cuts would be,” said Alex Lawson, the executive director of the advocacy group Social Security Works. “I think that you would find a huge backlash.”

Led by the AFL-CIO, the progressives have presented a united front on two basic demands: No cuts to entitlement programs, and no reauthorization of the Bush tax cuts for higher income brackets. "If it’s bad for workers, it doesn’t matter to us who proposes it. We won’t be on board. We won’t be taken for granted," Richard Trumka, the AFL-CIO's president recently told Salon's Josh Eidelson.

“Some people in the White House think that compromise and bipartisanship for its own sake is a principle the American people will admire,” said Adam Green, the co-founder of the Progressive Change Campaign Committee, which boosts liberals in primary fights against moderate Democrats. “But there’s good compromises and there’s bad compromises, and if he cuts Social Security or Medicare, that would just be a huge betrayal of the mandate the American people gave him.”

Green said his group would “absolutely” mobilize against the president, including running TV ads, if it looks like he’s going to cut a bad deal. During a previous fight with Congress over taxes in 2010, the PCCC ran TV ads hitting Obama by merely repeating his own words opposing the Bush tax cuts.

Meanwhile the AFL-CIO is keeping its organizers in the field and MoveOn has not “taken a break” since the election, making preserving the social safety net the top priority of its field efforts, media campaigns, and email blasts to its 7 million members. Other activists invoked threatening primaries against congressional Democrats who vote in favor of entitlement cuts. Others invoked the Tea Party model.

“It really has people up in arms and they’re prepared to fight on these things,” Dean Baker, a liberal economist and the founder of the Center for Economic and Policy Research, told Salon.

So far, the president seems inclined to use his newly acquired political capital, announcing shortly after the election that he will veto any bill extending the Bush tax cuts on income over $250,000. But he’s been less clear about entitlement programs. A memo obtained by journalist Bob Woodward showed that during negotiations last year on raising the debt ceiling, the White House was prepared to entertain cuts to Social Security, Medicare, Medicaid and TRICARE, the military health plan, as well as reduce tax rates on individuals and businesses. This has worried liberal blogs and activists.

“The president should absolutely not be trusted on the grand bargain,” said a senior liberal grass-roots strategist, who asked not to be named so as not to damage relations with Democrats. “It’s not hard to see where the president is on this. I think he has some kind of grand delusion about cutting Social Security and Medicare to save the country from some kind of crisis that doesn’t exist.”

In previous standoffs with Congress that have drawn pressure from progressives, the White House has been dismissive at best, and hostile at worst. In 2010, then-White House Press Secretary Robert Gibbs told The Hill that the "professional left ... wouldn’t be satisfied [even] if Dennis Kucinich was president.” He went on to mock  liberal priorities in a way that conservatives often do:  “They will be satisfied when we have Canadian healthcare and we’ve eliminated the Pentagon. That’s not reality." Relations have since repaired between the White House and the "professional left," but the alliance is still uneasy.

And activists will have some help from inside Congress as well. Minnesota Democratic Rep. Keith Ellison, the chairman of the House Progress Caucus, told Salon: “Progressives in and outside of Congress stand united: We will accept a deal from Republicans that preserves Medicare, Medicaid and Social Security benefits for working families, calls on the wealthy to pay their fair share, requires the military to streamline its budget, and invests in jobs.”

The caucus, which will likely add a few members after last week’s election, put forward its own plan that mirrors the demand of the grass-roots groups. Sen. Bernie Sanders of Vermont, a reliable advocate of social safety programs, is hosting a summit later this week to agitate in favor of preserving the programs.

Of course, it’s unclear how much leverage progressives really have with Obama. Any time you go up against a president, the deck is stacked against you -- your only tools are protests, media campaigns, primaries, campaign contributions, etc. And of course the president is insulated from electoral pressure, since he’ll never have to run again.

Still, activists can certainly apply pressure to members of Congress to kill a bad deal or hold out for a better one, and they could conceivably drive down Obama's approval rating -- the president’s chief currency in Washington -- by turning liberals against him.

If nothing else, strong and sustained pressure from the left should tug the political center of gravity somewhat in their direction, just as the Tea Party has done on the Republican side. If liberals can credibly threaten to scupper a deal, that gives Democrats more leverage to demand a more progressive agreement.

A concern now among activists is that their coalition will crack. Some said the White House has been quietly going around to various progressive groups to feel out where some might give. “There’s definitely a desire to try and fracture the left,” said Raven Brooks, the executive director of Netroots Nation, the coalition of liberal blogs that puts on the eponymous conference every year. “The key to preventing that from happening is to keep everyone together with the same clear bright lines and hold each other accountable ... The important thing for activists is to present a united front on this.”

The president has proved to be a poor negotiator with Congress on several occasions in the past, but he's never been in as strong a position as he is now -- and he's never had this much pressure from his left to hold him accountable.