After his revolting "traditional America" rant on "The O'Reilly Factor," maybe he'll lose his Fox show too 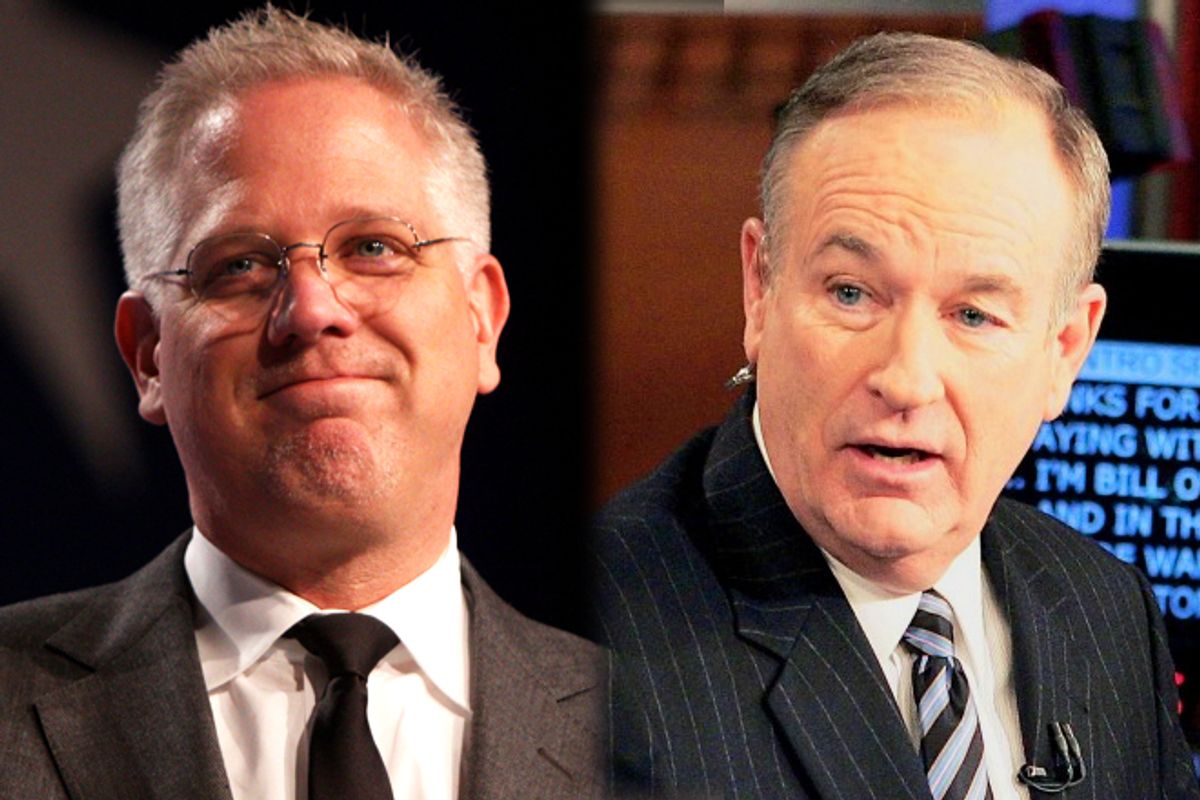 I thought maybe Bill O'Reilly's historic rant about Obama winning because "the white establishment" is disappearing might just be a case of election night crazy, from which he would recover. But no, it's his new shtick.

In case you missed it, on his Monday night show O'Reilly followed up his election-night meltdown by blaming President Obama's reelection on "secular progressives" and the "far left," whom he described as a "dangerous outfit, bent on destroying traditional America and replacing it with a social free-fire zone that drives dependency and poverty." O'Reilly called Obama "the poster boy for progressive secularism," and he went on:

"Secular progressives don't want limitations on so-called private behavior. Want to smoke drugs? Fine! Want to abort a fetus? We'll drive you to the clinic! Want to have a kid when you're 16? No problem at all, we'll support you."

Uh-oh, Grandpa just found out that the kids "smoke drugs." Get him a hot toddy and put him to bed.

On Tuesday, O'Reilly blasted the president for meeting with representatives from the so-called far left, in which he includes MoveOn and labor unions. He then took the opportunity to lash back at people who criticized him for his election night lament about the disappearing "white establishment," insisting it was no "lament" but instead "sage opinion." Yeah, he really said that.

A word to O'Reilly: That way lies madness. It's also the way Glenn Beck lost his Fox show.

You remember Glenn Beck? He had already begun his descent into crazy when Fox czar Roger Ailes gave him a show, which debuted on the eve of Inauguration Day, Jan. 19, 2009, with defeated and soon to be irrelevant GOP V.P. nominee Sarah Palin as his marquee guest. In his great book "Backlash," Will Bunch charted the rapid decline of Beck and his angry white fans into paranoia, hatred and, for a few – Pittsburgh cop killer Rich Poplawski comes to mind -- violence. Bunch was particularly smart about the way Beck's odd showtime, 5 p.m. ET, gave him a perfect spot to foment anxiety within a key demographic: retirees and the unemployed, and particularly the unemployed who began calling themselves retirees to disguise the fact that they'd fallen out of the labor market, for good.

Within a couple of months, Beck was soothing his viewers by telling them they outnumbered Obama supporters. "We surround them," he intoned reassuringly, and he even launched a "We Surround Them" movement that morphed into his weird Sept. 12 organization, which gathered up right-wing survivalists and militia types and secessionists and gun nuts into an anti-Obama posse. But Beck's unraveling soon made his show unwatchable. His ratings declined, he began insulting Jews with rants even he later termed "ignorant," and in April of 2011, he and Ailes parted ways. Now he broadcasts for his "subscribers" on BlazeTV. It's an even crazier show with a tinier audience, but Beck is bilking them directly, so maybe he's doing fine financially. But he's lost the massive platform Ailes gave him.

O'Reilly started getting close to "We surround them" territory Monday night, when he insisted that although "traditional America" took a beating on Election Day, it isn't gone for good. It requires a "special politician," O'Reilly claimed, and Mitt Romney (Remember him? Where is he now?) was just not that guy. O'Reilly asserted that Obama only won because he bought off women and black and Latino voters with "big spending on federal programs." In the middle of his vaguely racist spew, O'Reilly did allow that some Latinos have family values, and might reject permanent residence in a party made up of abortionists and drug dealers if Republicans reached out to them.

You hear that a lot – that Latinos might become Republicans if only the GOP toned down its anti-immigrant rhetoric and turned up the volume on its culture war, antiabortion rhetoric. It turns out – surprise – to be based on dumb stereotypes of the diverse Latino population as a proto-Christian right voting bloc, just a little browner than the old one. In fact, most polls of Latinos find they're pro-choice. And a survey of young 2012 voters by the CIRCLE youth-vote researchers at Tufts University found that Latinos 18-29 are more likely to consider themselves Democrats than even young African-Americans. The single youth bloc most likely to support legal abortion, according to CIRCLE: young Latinas, the fastest growing segment of the voting population.

But I'm not sure why I'm seriously trying to refute any of O'Reilly's fact-free rant. None of it is reality based. At this rate he'll soon be scrawling conspiracy theories on chalkboards and trashing Frances Fox Piven, the elderly Columbia University professor whom he credited/blamed for the Obama revolution.

It's ironic that O'Reilly came unglued about legalizing recreational marijuana use, because O'Reilly himself is like a drug pusher peddling narcotizing hatred to anxious older white people. As he ups the ante on paranoia about Obama and our changing country, it's as if he's trying to go directly into his viewers' homes to shoot them up with more hate until they overdose. The problem, as every good drug kingpin knows, is that you can't dip into your own stuff, and O'Reilly clearly has.

It's worth remembering what Fox boss Roger Ailes said after he and Beck parted ways in 2011.  "We felt Glenn brought additional information, a unique perspective, a certain amount of passion and insight to the channel and he did," Ailes said. "But that story of what's going on and why America is in trouble today, I think he told that story as well as could be told. Whether you can just keep telling that story or not ... we're not so sure."

O'Reilly is essentially telling the same story. If Ailes wants his party to come back to life after its Fox-assisted suicide, O'Reilly and his delusions could wind up on Blaze TV, too.

Also: In responding to O'Reilly's "traditional America" rant on MSNBC's "The Ed Show" Tuesday night, I talked about how it ignores the fact that Obama won a majority of Catholic and Jewish voters, and that his big problem is with white evangelical Protestants, which showed that Democrats have values, too. A few people heard that as implying that secular people and atheists don't have values. Of course I didn't mean that and I don't think that. I apologize for feeding into O'Reilly's attempt to divide and demonize people who don't happen to think the way he does.