Is it game over for Grover Norquist?

The anti-tax activist's grip on power, even in the GOP, has never been weaker -- just as he faces a critical test 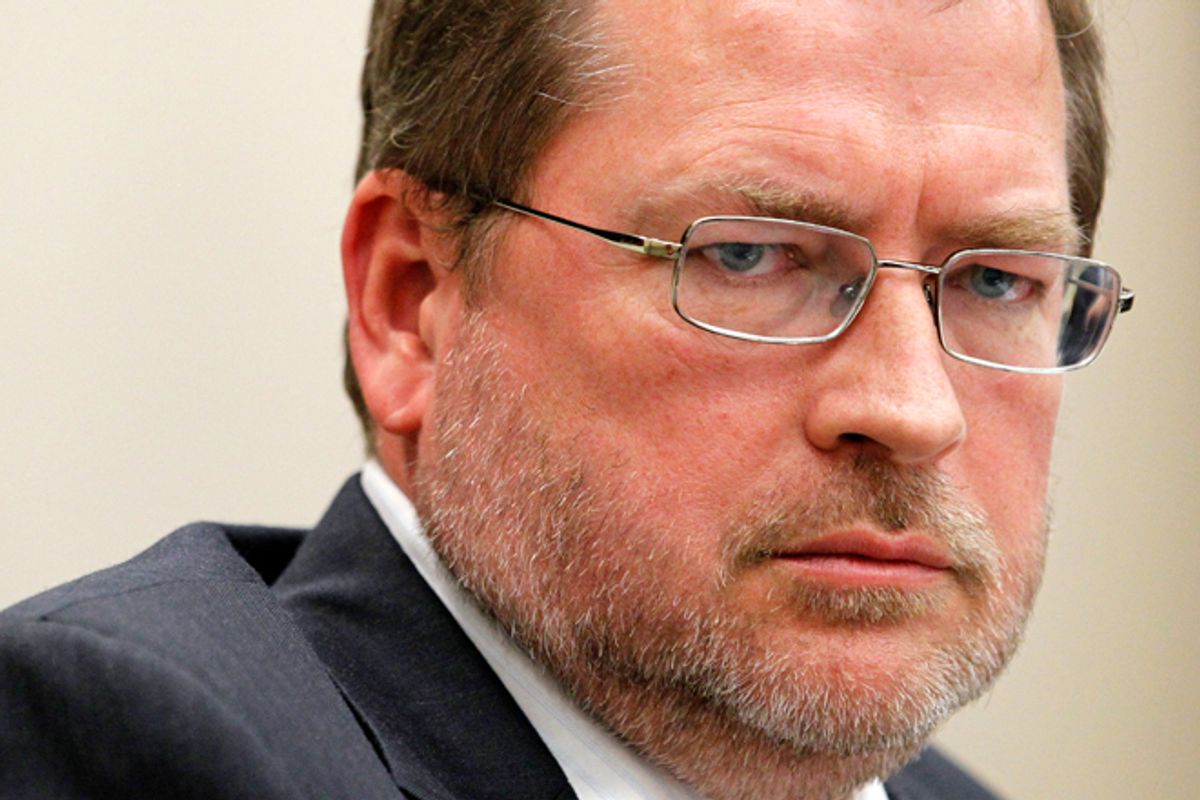 Two meetings in Washington today tell the story of the decline of Grover Norquist, the conservative activist who is seeing his near-iron grip on GOP tax policy over the past two decades slipping. One is Norquist’s weekly “Wednesday Meeting,” a gathering of “more than 150 elected officials, political activists, and movement leaders” who plot strategy and coordinate messaging every week. After big losses at the polls in last week’s election and a fracturing conservative base just as Congress heads into its most important tax negotiations in years, it's safe to assume that this morning’s meeting was tense.

There was a time when almost every single elected Republican in Washington and even state capitals would sign Norquist’s anti-tax pledge, which binds elected officials to a promise not to raise taxes under any circumstance. As recently as last year’s negotiations over the debt ceiling, Norquist had fealty from a majority in the House of Representatives, including Speaker John Boehner and the entire GOP leadership. "60 Minutes’" Steve Kroft labeled Norquist “the most powerful man in Washington.” Those who violate his pledge could long expect to face attack ads aimed at unseating them, bankrolled by Norquist's massive war chest. Americans for Tax Reform spent almost $16 million on independent expenditure ads in 2012. Crossing the group has always increased the likelihood of a primary challenge.

But times are changing. Today's second interesting meeting is taking place a few blocks away from Norquist's downtown D.C. headquarters, at the White House, where President Obama is meeting with a dozen CEOs of the country’s biggest corporations. How did Norquist react to news of Obama reaching out to the business community, which he aims to represent in Washington? Not positively. Norquist told the Washington Post the CEOs were “acting like a group of trained seals” for Obama, posing for a “photo op” to give the president cover.

You’d think Norquist would be happy that Obama is giving an audience to the titans of the private sector, but no. That's because the meeting, which gives the president a chance to win some business support for his agenda without any input from Norquist, represents a threat to his personal power. Is his petulant reaction -- he invoked the term “poopy head” on national TV on Monday -- a sign that he's losing his once awesome power over the nation’s capital? Maybe.

Norquist faces an unprecedented rear-guard attack as the congressional GOP fractures on the tax issue. Last year, there were 238 members of the House and 41 members of the Senate who had signed Norquist’s pledge. This year, there are just 217 in the House -- one shy from the 218 needed for a majority -- and 39 in the Senate, an all-time low. As the Hill’s Russell Berman reports, while Norquist claims his army is 219 strong in the House, two of those members have since disavowed Norquist’s pledge.

Democrats are hoping to exploit GOP divisions to push for tax increases on the wealthy during the lame duck session of Congress. “More and more people on the hill are realizing that Norquist is a has-been, and the outcome of the fiscal cliff will probably consign him to the footnote status he's always deserved,” a senior Democratic aide told Salon.

The true scale of the desertion from Norquist’s pledge is actually obscured by GOP losses in the House. At least a dozen of the House Republicans’ top recruits, touted as “Young Guns,” declined to sign the pledge this year. Norquist’s group spent hundreds of thousands of dollars on ads explicitly defending candidates like California Republican Ricky Gill and Georgia Republican Lee Anderson against flak they were taking for signing the pledge. Both lost.

And back in Washington, where signing the pledge was once de rigueur, Republicans have been increasingly bold in rebuking Norquist. Oklahoma Sen. Tom Coburn has long been a sharp critic of the pledge’s inflexibility -- “Grover, you’re stupid,” is just a sample -- but now he’s being joined by a growing roster of colleagues. “Grover Norquist has no credibility, so I don’t respond to him. He doesn’t deserve being responded to,” said Georgia Republican Sen. Saxby Chambliss. "Simply put, I believe Mr. Norquist is connected with and has profited from a number of unsavory people and groups out of the mainstream," said longtime Virginia Republican Rep. Frank Wolf on the House floor.

Several members have even retreated from the pledge, such as Minnesota Rep. Chip Cravaack, who was elected in 2010 and had one of the nation’s highest profile races this year. “I have learned, never sign a damn pledge,” he said this spring when asked about Norquist’s pledge. Cravaack still lost. Indeed, the pledge came up in a number of races and there’s some evidence that it proved to be a political liability.

And it’s not just in rhetoric. Norquist faced one of the biggest legislative tests of his power when a subsidy for ethanol production came up for renewal last year. He staunchly opposed it, saying eliminating the tax subsidy would be a de facto tax increase and thus a violation of the pledge. Republicans joined Democrats to kill the subsidy anyway.

Norquist has also been rebuked on looming military cuts that will automatically take effect at the end of the year if Congress and the president fail to reach a budget deal. Republican hawks like Sen. Lindsey Graham of South Carolina have said they’re willing to raise taxes to preserve Pentagon funding. Asked about how this would conflict with the pledge this summer, Graham shrugged and said, “I’ve crossed the Rubicon on that.” Today, even Sen. John McCain said at the Washington Ideas Forum that "fewer and fewer people are signing this [Norquist] pledge.” He said this “somewhat triumphantly,” the Huffington Post’s Sam Stein noted.

Even former President George H.W. Bush and his son, former Florida Gov. Jeb Bush, an early 2016 favorite for the GOP nomination, have disowned Norquist publicly. “The rigidity of those pledges is something I don’t like. The circumstances change and you can’t be wedded to some formula by Grover Norquist. It’s -- who the hell is Grover Norquist, anyway?” the senior Bush told Parade magazine in July.  “The pledge was presented to me three times. I never signed the pledge,” the younger Bush testified to Congress in June. “I don’t believe you outsource your principles and convictions to people.”

Of course, the tide has been turning against Norquist for some time, and his demise has been predicted before. But this crisis moment in Washington looks a lot like a breaking point for the anti-tax agenda. Speaker Boehner has already indicated willingness to increase revenues and the consensus among Washington power brokers is that taxes on the wealthy will go up one way or the other, even if rates stay the same. Indeed, President Obama has vowed to veto anything that doesn’t. And the problem with a hard-line pledge like Norquist’s is that it intentionally leaves no room for flexibility. So once the dam cracks, it can break wide open.