When I became a junkie

A guy I met in rehab shot me up for the first time. Then the needle and I had a love affair all our own 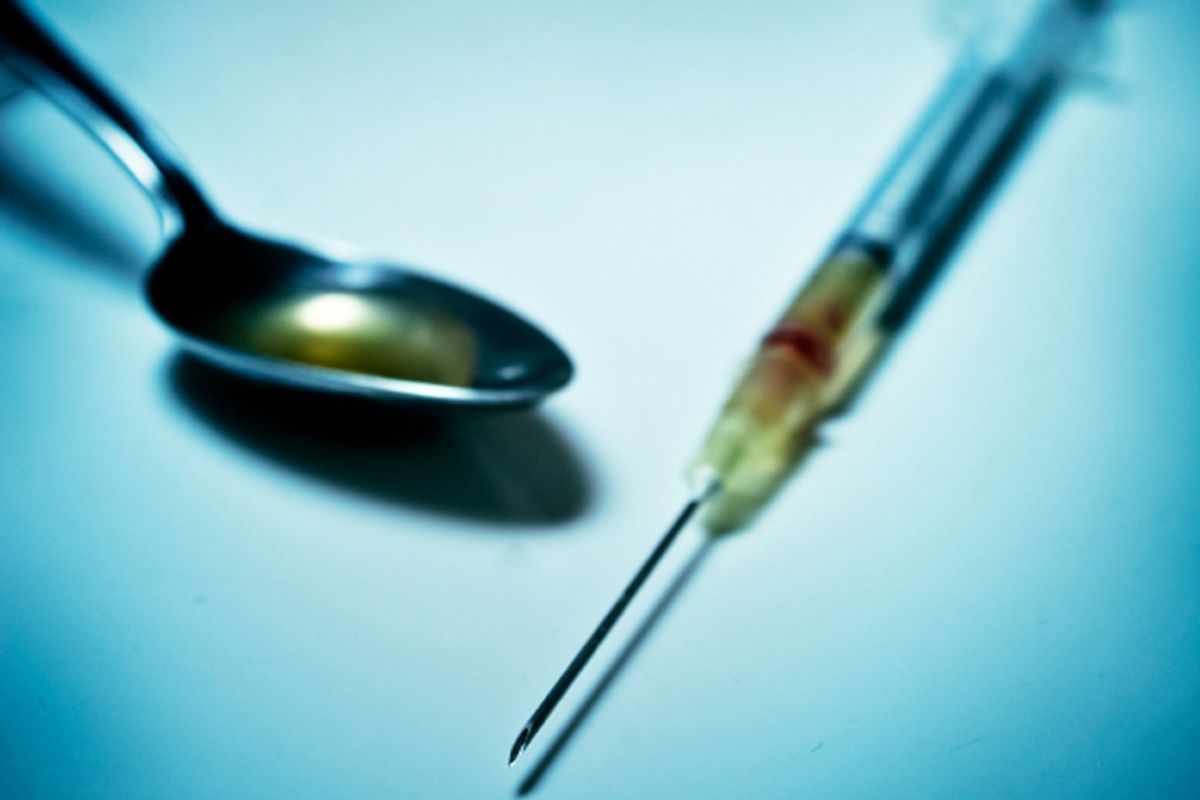 When I checked into Promises in 2005, I had been doing so much cocaine that my nose bled onto the intake papers as I filled them out. I was so high I don’t remember what I signed but I was quickly escorted to a bed where I promptly slept for three days. A month later, I was released into the world. And then, after my father paid a staggering $7,000 for outpatient treatment, I dropped out after three days and started using again.

I remember being in my apartment, doing coke alone to a soundtrack of the Twilight Singers, wondering whom I could get high with. I cracked open my rehab-given Big Book. In the front, just like in my high school yearbook, were sweet inscriptions from fellow clients along with their phone numbers. I used my deductive reasoning to decide who among them would have already dropped the ball and be down to party. I picked a handsome rich kid junkie who was a chronic relapser that I’d been semi-friendly with. I called. Bingo. Within a few hours, he was at my house with cocaine, heroin and syringes. As he shot up speedballs, I snorted thick long lines off my enormous mirrored coffee table.

“Why aren’t you shooting?” he eventually asked. “It’s so much better and you use so much less.” He sounded very matter of fact about it all.

Up until that point, IV drug use was a line I had vowed never to cross. But I had just relapsed after my second rehab and a part of me felt doomed: I’d almost come to accept the fact that being a drug addict was going to be my fate. “So why the fuck not?” I thought. “I’m hopeless. Might as well embrace that shit, take it to the wall.”

I watched him mix up a concoction of cocaine and water in a spoon and draw it up in a syringe. Then he took the belt of my robe and tied it tightly around my upper arm. My veins bulged. He inserted the needle, drew back again and blood shot into the barrel—I’d come to find out later that this is called registering— before slowly pushing the plunger in. I watched in fascination and horror, my heart pounding furiously. And then the high hit me. The feeling was overwhelming: like you were about to have the biggest orgasm of your life while riding a terrifying roller coaster. Oh my God. From that moment, I was hooked.

For the next few weeks, this guy and I shot coke, drank milkshakes and scored dope together. My pants got looser as he got sweatier and more paranoid. I would wake up to find him in his backyard armed with a gun and a flashlight, waiting for the cops who weren’t coming.

I never shot heroin (although I smoked it once and promptly fell asleep) because I’m an upper girl at heart. Plus I wasn’t ready for the commitment. I knew at least with coke, you could sleep it off for a few days and there was none of that kicking sickness. Because I’m epileptic, it probably would have been smarter to shoot dope but oh, well. Of course shooting coke, with or without a seizure disorder, is dicey; Russian roulette at its finest. But I was deep in it now and felt invincible. Or maybe I just didn’t care anymore. Either way, the result was the same: confident recklessness.

The entire time this had been going on, the guy had been shooting me up. I was still the novice while this guy had been a junkie for years and knew all the tricks. He knew, for example, to put White Out on the tip of my needles to make sure we didn’t mix ours up. But one night, after we scored some coke off one of his dealers, he went directly outside after shooting himself up.

He was high and distracted and snapped that I needed to wait a second.

I didn’t want to wait. Drug addicts aren’t known for being good at deferring gratification.

Almost without thinking, I drew up the syringe and plunged into my arm. Immediately after, I slid off the chair and had a massive convulsion. He, meanwhile, was outside throwing up, having a moderate heart attack. What the fuck was in this stuff? Turns out, nothing beyond drugs; sometimes throwing up and convulsions are just going to happen.

As I thrashed about on the floor, I kept repeating, “I’m gonna die. I’m gonna die.” Clearly, I didn’t: I came to with wet hair because he had thrown water on me in an attempt to bring me out of the seizure.

I wish I could tell you I got clean after that frightening episode. But I didn’t. The thing with most drug addicts I’ve come across is that when we overdose, we just chalk it up to experience and try to be more careful the next time. It certainly didn’t scare me into getting clean. If shooting coke was going to give me seizures, I decided, well then I’d shoot coke in a helmet in a pit of pillows—my own version of harm reduction. Looking back, it seems ridiculous and suicidal and of course it was: passive nonchalant suicide.

I jumped around to Santa Fe and Ashland and then came back to LA, pulling geographics as I tried to get clean. But now that I’d been properly turned out, I was a junkie and it was a whole new hell. With needles, you don’t only become addicted to the drug but to the whole ritual of shooting up. One of my most frightening memories: me crouched in my sink with the belt of my robe tied around my throat like a tight scarf, poking a needle into a swelling vein in my neck. There were spray marks of blood on the ceiling, brownish red splatters on the wall. I tried to wipe them off casually as I trembled and tried to shoot myself up again. Shooting coke makes you desperate and willing: the rush is gone in minutes so you shoot up again and again and again to feed the monkey. I became a human pincushion and had track marks all over. I also tried to shoot up in my groin, feet, breasts and everywhere else I could think of.

I went to detox twice in Mexico over one summer. There was a clinic in Tijuana that espoused intravenous amino acid therapy for addiction. I was still very resistant to AA at this point so my parents were willing to pay for me trying everything else: shamans, biofeedback, therapy, exorcisms, acupuncture, herbology. But every time I returned to LA, I promptly relapsed.

Shooting up is a loner activity. Show up to a party with a six-pack and some syringes and you’ll really freak people out. There was this Texan kid I used to smoke crack and have sex with and even he was tripped out by my new habits.

As my addiction continued, most of my friends fell away. They were frightened and didn’t want to watch me kill myself. But I had one friend who would talk to me: she’d call every morning to see if I was still alive, which I found annoying but sweet. One day she asked casually if I would talk with her friend who’d had a stroke from crack at 23 and was now clean a few years.

“Just listen to her story,” she urged me. I agreed, not having the slightest clue I was about to be 12 stepped. The girl told me how her parents were so convinced she was going to die that they had bought her a grave plot. She told me about her strokes and her arrests and everything she said made me feel safe enough to share my stories with her. I knew that she had been there, she understood, and she didn’t care that I was high as fuck while I was talking to her. I felt a certain kinship. She was clean and she seemed happy. I wanted to get clean, too—I just didn’t think it was possible.

At some point I agreed to meet her at an AA meeting so I drove over there with ace bandages wrapped tightly over my bloody arms. I sat in the meeting, sweaty and shaking, but I heard something that struck me—I don’t remember now what it was. And I cried. I remember thinking, “Yes, I felt that, too. Yes, I think that, too.” Thus began my first sobriety.

I began my detox in cool hipster Hollywood meetings. I was skinny and pale and wore a parka in the 90-degree heat, trembling, with fading track marks on my arms and neck. I had a few slips but never touched a needle. When I had 30 days, I went home and cut lines with my 30-day chip to celebrate. The irony was not lost on me.

It’s been six years since I’ve shot coke but I still fantasize about it a lot. Whenever I look down and see my prominent veins, I run a finger along them. I watch, salivating, as nurses take my blood at hospitals. If I see somebody shoot up on Intervention, my heart begins to race wildly. I have never come close to shooting up again, nor has anybody done it in front of me. But the obsession lingers on, like the memory of an old boyfriend that you just can’t stop loving, no matter how abusive and dark he was.