The ambitious "Anna Karenina," built around the stunning Keira Knightley, gives a fresh twist on a literary classic 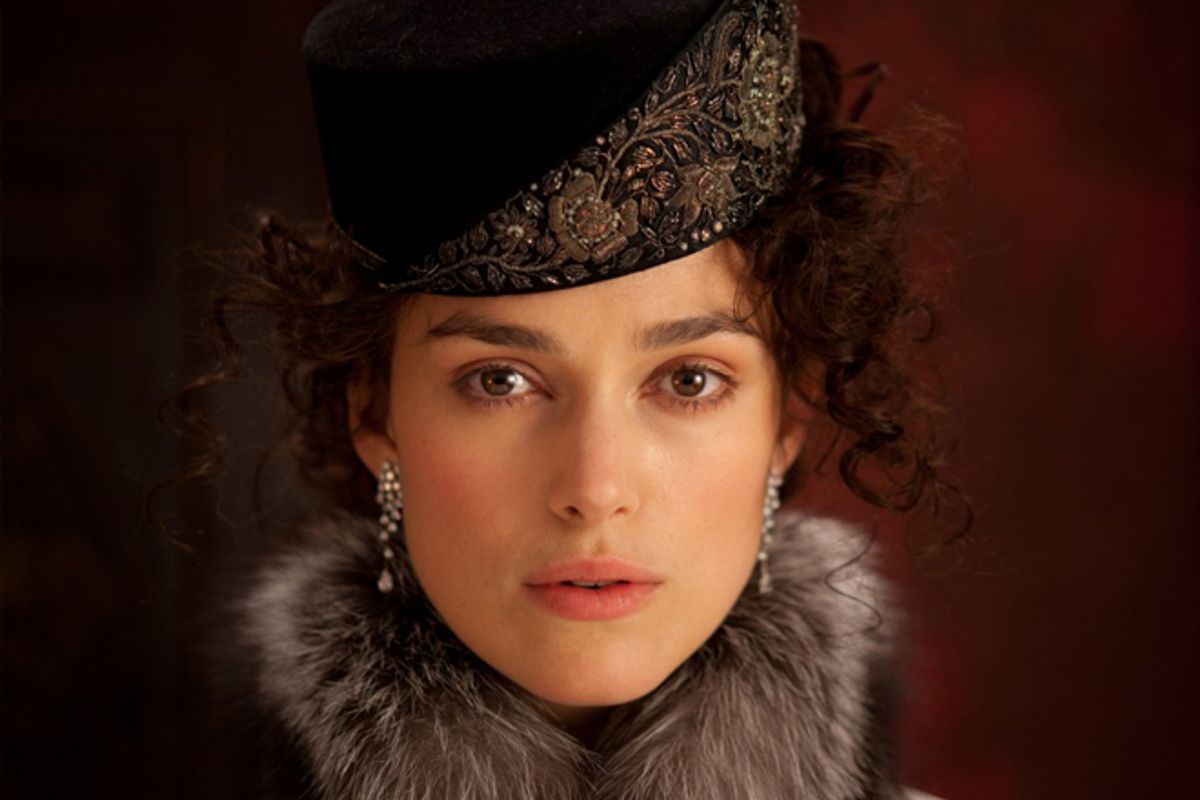 It’s hopeless to expect any film adaptation to capture every aspect of “Anna Karenina,” both because it’s a jillion pages long and because it’s arguably the greatest of all Russian novels. It’s a complex social satire of the late Russian Empire, a half-accidental feminist manifesto, an essay on the ambiguous and irresistible power of romantic love and a parable of Christian suffering and sacrifice. It’s the story of three marriages – one a disaster, one an unhappy compromise and the third a wonderful surprise – and two great loves, which over and over again contradicts its famous opening line: “All happy families are alike; each unhappy family is unhappy in its own way.”

Given all that, the truly surprising thing about director Joe Wright and writer Tom Stoppard’s exaggerated and theatrical new adaptation, which uses star Keira Knightley as its emotional nexus, its central architectural element and its swirl of whipped cream on top, is how much of Tolstoy’s spirit they actually pack into the damn thing. Wright, who previously directed Knightley in “Pride and Prejudice” and “Atonement,” is a superior showman with a tendency to create marvelous-looking spectacles that deflate to almost nothing after you watch them, like a meringue forgotten in the fridge. (Yes, I ultimately felt that way about Wright’s spy-girl detour “Hanna” too, although the first two-thirds of it is tremendously entertaining.)

No doubt some viewers will have a similar reaction to this dazzling but only partly coherent confection, which frames “Anna Karenina” as a 19th-century stage melodrama, complete with choreographed gangs of extras, creaking floorboards, groaning backstage machinery and scenic backdrops that rumble up and down. It’s like a crackpot combination of Baz Luhrmann’s “Moulin Rouge!”, Ingmar Bergman’s “The Magic Flute” and Lars von Trier’s “Dogville.” Does this crazy idea work? Maybe 70 percent of the time, but when it does it’s both daring and brilliant. It largely frees Wright from staging laborious outdoor location shoots – although there are several occasions when the movie breaks the frame into the “real world” outside the demimonde of Moscow and St. Petersburg society – and entirely frees him from distracting questions of realism or period accuracy.

To get even more specific, it makes “Anna Karenina” feel less like a Joe Wright movie and more like a Tom Stoppard play, or at least like a balanced blend of the two. If you’re half as big a fan of England’s greatest living dramatist as I am, that can only be a good thing. (What with Tony Kushner’s script for Spielberg’s “Lincoln,” it’s a big fall for playwrights on the big screen.) The crucial steeplechase scene, in which Anna humiliates both herself and her upright, boring husband (Jude Law, and we’ll get back to him) by revealing her feelings for the dashing Count Vronsky (Aaron Taylor-Johnson) is a smashing combination of the cinematic and the theatrical, as big a show-stopper as Wright has ever staged. Amid all the noise and color of this deliberately artificial production, there’s no doubt that some things get shortchanged: Instead of page after page of Anna’s internal struggle – her yearning for love, for sex and for freedom and her certainty that for a woman in her position those things mean self-destruction – we must glimpse it in Knightley’s eyes, in a few brief scenes.

Wright understands how to use Knightley’s remarkable angles and screen charisma to best effect, but it’s time to give this much-discussed and oft-derided actress her due. If Knightley began her career as an upper-crust ingénue type with a bone structure made for the movie screen, she’s more than that now. Her Anna is a complicated, powerful and vulnerable character caught between the romantic sensation of being swept away by passion and a consciousness that she’s an adult woman who has chosen the path toward catastrophe. I couldn’t help thinking that under the skin Anna is a sister to Sabina Spielrein, the sadomasochistic patient, lover and collaborator of Carl Jung whom Knightley played in “A Dangerous Method.”

If Knightley is very much the visual and dramatic centerpiece, Wright and Stoppard capture a surprising amount of the stories, characters and social texture that surround Anna. Law might seem an odd choice to play Karenin, Anna’s ramrod-straight husband; a few years ago he’d have been perfect as Vronsky, the devil-may-care cavalry officer who seduces her. Karenin is an immensely ambiguous figure, from one point of view a sinless husband and an example of Christian self-sacrifice, from another an officious, small-minded man who has allowed his beautiful wife to molder on the vine. The question of what Karenin has done to deserve betrayal and public humiliation, which he plaintively asks her at one point, has various possible answers. But making him a handsome and charismatic man whom Anna could have loved and hoped to defrost -- and not merely a scold, a prude and a bore -- complicates the picture.

I’d like to say that casting 22-year-old English pretty boy Taylor-Johnson (who starred in “Kick-Ass” and Oliver Stone’s “Savages”) as Vronsky also pays off, but that’s a much more mixed bag. With his wispy mustache and golden curls, Taylor-Johnson’s Vronsky looks like a schoolgirl dressed in her big brother’s military uniform. I suppose Wright is looking for contrast with Knightley, who certainly isn’t masculine but has such a forceful presence and the jawline of an aircraft carrier. It feels like there’s an intriguing high concept beneath the surface here – what if Vronsky is the prey and Anna the seducer, at least in emotional terms? – but there’s not much in either the book or the film to support it.

Adaptations of “Anna Karenina” often skimp on the story of Levin (here played wonderfully by Irish actor Domhnall Gleeson), the awkward rural landowner who’s hopelessly in love with Kitty (Alicia Vikander), the teenage Moscow beauty whom Vronsky has dumped after meeting Anna. Stoppard and Wright grasp, however, that Levin is in his own way as important a character as Anna, and can even be regarded as the novel’s alternate protagonist. Inescapably, Levin’s wrestling with the Russian soul and Christian morality, which occupy dozens if not hundreds of pages in the novel, get boiled down to a few enigmatic scenes. Those, however, are the scenes when Wright leaves the “theater” of the main action behind for the wide open spaces of the Russian steppes, pulling us away from Anna’s solipsism, Vronsky’s vanity and Karenin’s narrow-minded ideology.

Other standouts in the cast include Kelly Macdonald as Dolly, Anna’s jilted and miserable sister-in-law (whom Anna encourages to forgive her cheating husband), and the delicious Olivia Williams, stealing every scene she’s in as Vronsky’s scheming mother. (I guess I'm just a lowbrow idiot, because the moment with Countess Vronsky and the flatulent dog slayed me.) But there’s no question that this movie’s big stars, along with Knightley’s non-Euclidean angles and perfect skin, are Seamus McGarvey’s cinematography, Melanie Oliver’s editing and Sarah Greenwood’s extraordinary production design. Is this the definitive “Anna Karenina,” the best of the dozen or so adaptations going clear back to Garbo and the silent era? I don’t know about that, but it’s a furiously ambitious literary adaptation, the best of Wright and Knightley’s careers, that tries to make us feel the intense sexuality and terror and grief of a classic novel, and to force us to face its questions about love and marriage and agree that we still can’t answer them.