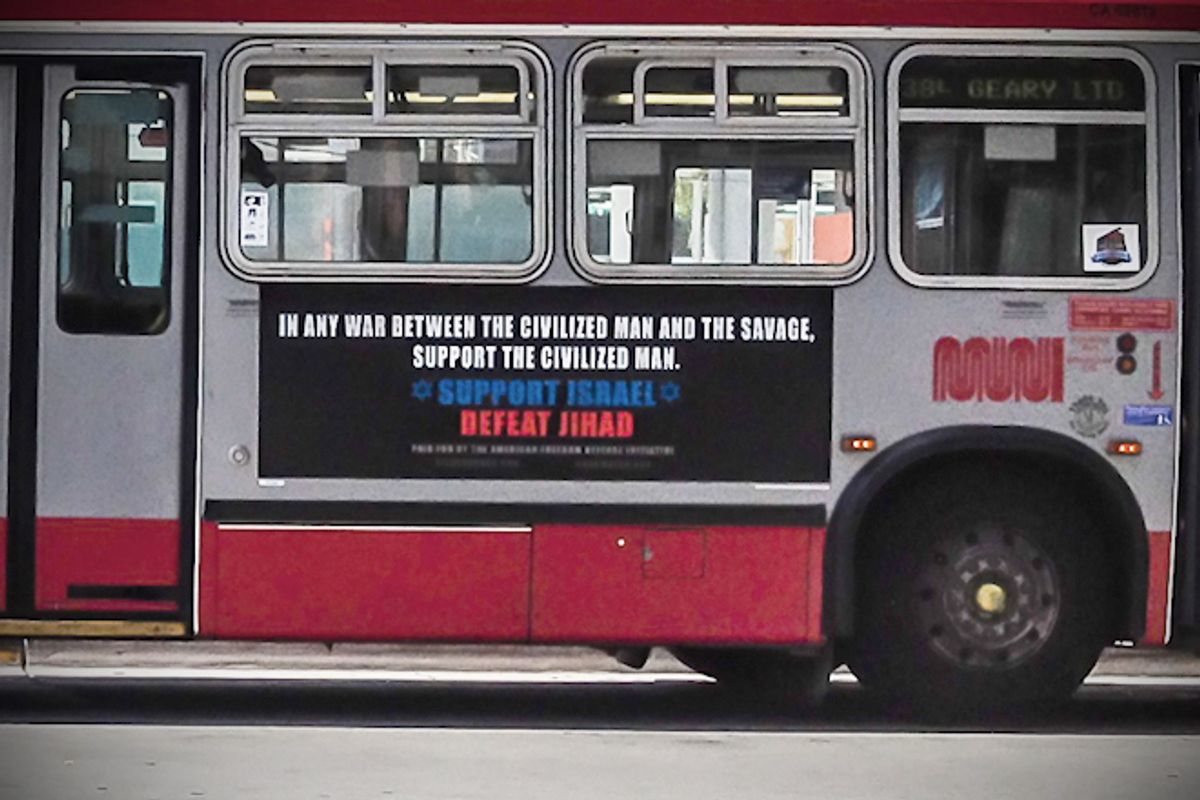 For some people, stoking fears about Islam and Shariah  is an election year issue (ahem, Rep. Michele Bachmann), but for others, like influential Islamophic blogger Pam Geller, it’s a life's mission. Geller led the campaign against the so-called Ground Zero Mosque in lower Manhattan and is one of a handful of activists at the core of the anti-Shariah movement; a few months ago, she paid for controversial ads on New York City buses and subways defaming Islam as “savage.” The campaign provoked a backlash, including vandalism and lawsuits, but the law sided with Geller’s right to free speech in both cases, with a court ordering New York's transit authority to display the ads and arrests for some who defaced her ads.

Now she’s taking her act to Chicago, where her ad went up on 10 buses yesterday afternoon. “In any war between the civilized man and the savage, support the civilized man. Support Copts. Defeat Jihad,” the ads read. Copts are Egyptian Christians who have been persecuted by the Muslim majority in the country.

But this time, activists, led by the Chicago-based Jewish Council on Urban Affairs, were prepared. They launched a campaign against the ads before they even appeared. “These ads are meant to create false divisions among our communities, generating suspicion and animosity,” Judy Levey, the executive director of the group, said in a statment. “It is very important to say in a clear voice, ‘not in our city.’ We’re better than that.” The JCUA held a rally Tuesday night against the ads and set up an online campaign to coordinate action and to collect voices of Jews in the area upset with the ads.

While Geller’s actions have been met with resistance from multi-faith groups in the past, opposition has usually been led by Muslim groups like CAIR, the Council on American Islamic Relations. How did she react to the novelty of a Jewish-spearheaded opposition? By comparing them to Nazi sympathizers, naturally.

“As if on cue, dhimmi Jews in Obama's old stomping ground did the step 'n fetchit for Islamic supremacism. Taking their cue from the Jewish councils of Germany and the judenrat that sold out their own people, they immediately denounced from ads,” she wrote on her blog.

There's a lot to unpack there. “Dhimmi” refers to non-Muslims who live under Islamic states and connotes inferior status. “Judenrat,” in case it’s not obvious from the context, were Jewish councils who collaborated with the S.S. in Nazi-occupied lands to coordinate the affairs of the ghetto and “were responsible for organizing the orderly deportation to the death camps.” And finally, lest any group be left unoffended, “step 'n fetchit” refers to Stepin Fetchit, the stage name of one of Hollywood’s first African-American actors, Lincoln Perry, who has since become controversial for playing racist or stereotypical roles, not unlike black minstrels of an earlier era.

Geller continued: “I expect Hamas-CAIR to denounce our ads ... [But] These Jewish ‘leaders’ are failing not just the Jews in Israel, but all persecuted and oppressed people. Did we not learn our lesson from World War II? Did we not have to make amends for our gross negligence while millions were slaughtered?” She even went after Manya Brachear, who wrote a news item about the ad in the Chicago Tribune, saying she's "only too happy to subjugate herself in the cause of Islam.”

“CTA understands that this ad may be offensive to our customers,” he added. “While the courts have ruled this ad is a form of protected speech under the First Amendment, we object to its divisive message,” a spokesperson for the Chicago Transit Authority told Brachear.

At least we know the CTA is not a tool of al-Qaida.

UPDATE: Levey, the Executive Director of the JCUA sent over the following response to Geller:

"The whole point of JCUA's response to Geller's ads is that hate speech is destructive. As Jews and as Americans, we can't stand idly by as people fan the flames of divisiveness by using hateful words and outrageous characterizations.

JCUA doesn't think Americans should be talking to each other like this. When hate and inflammatory language is injected into the discourse, nothing good comes of it.

That's not a Jewish value and it certainly isn't an American value."