Kids hate-tweet Obama, echoing what they hear at home 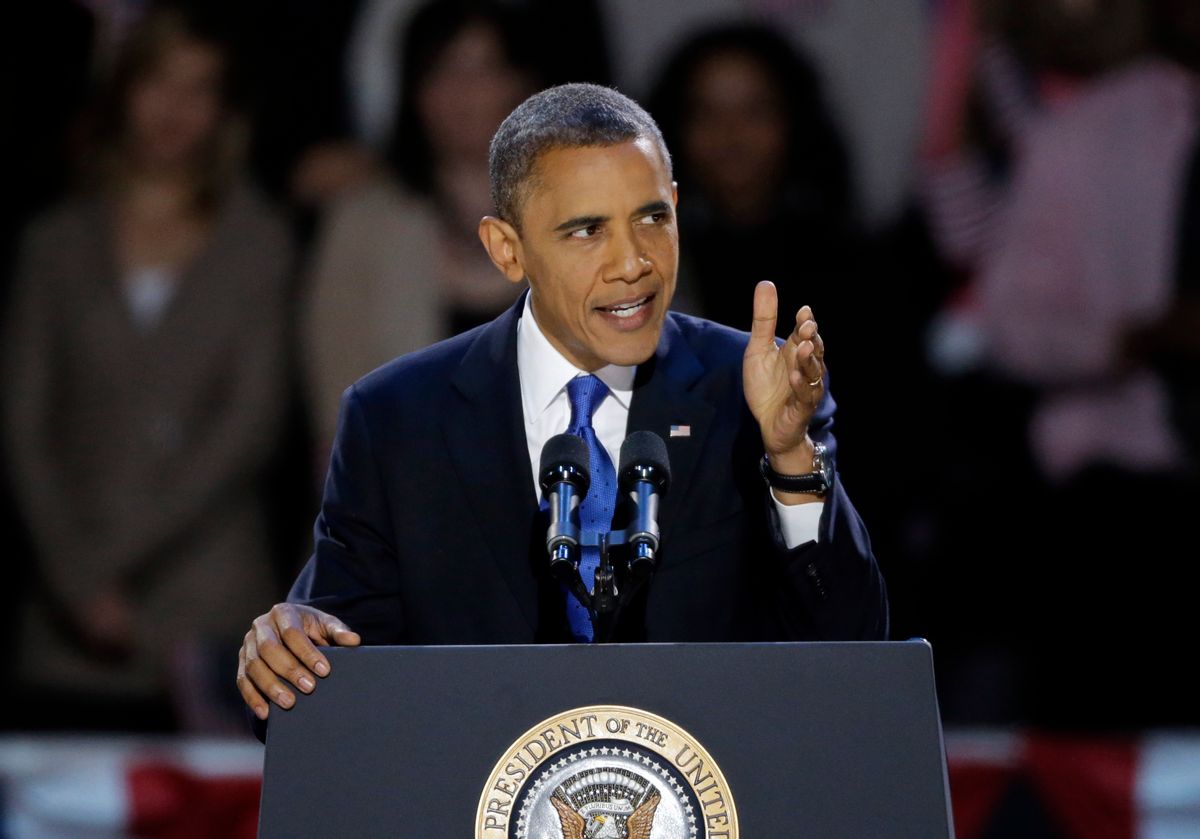 The reelection of President Obama has hardly dimmed the enthusiasm of hardcore GOP racists. Even Mitt Romney, not too many hours after his hasty but graceful (for him) concession speech, is already out on the airwaves bitterly claiming it was the president’s promises of “gifts” to the unwashed 47 percent (read: minority) that got him reelected. Paul Ryan blames the unexpected high turnout of the “urban” vote (if you feel at all that the GOP uses the word "urban" to mean anything other than black, please refer to this video of Lee Atwater and the birth of the GOP’s “Southern strategy”). Karl Rove, who should have his own TV show called “The Biggest Loser,” has been petulantly invoking a high “urban” turnout, even bafflingly labeling a large and enthusiastic voter turnout as “voter suppression” — he must mean that lots of minority voters are considered suppressors of the white vote.

Naked racism as a political strategy if not life philosophy is nothing new to the GOP, but perhaps progressives need to point out that this is the urgent culture war facing our country, not whether PBS deserves its minuscule amount of government funding, because the collateral damage of a racist party are the children.

As a public service, I suppressed my gag reflex and read every one of the entries from Hellothereracists, a Tumblr composed of racist tweets about President Obama post-election, submitted by those who spotted them on the Internet. From the site: “The (un)official motto of the GOP is 'personal responsibility' — so with publicly available information, let the words, names and faces of these racists be documented so that they may be responsible for them.”

Using racist language to call for the president’s assassination is shocking on its own, but even more notable is the large number of children — high school students and recent grads — who appear on this Tumblr. A typical post: “If that coon takes my gun ill turn him into Bin Laden and blow his damn brains out!” This is Colten Chandler, a cherubic-looking student attending Mayville–Portland High School in North Dakota.

Sean Spratt, another high school student: “Well Atleast I got to see my brothers friends [Halloween] costume it will still be my favorite! A Obama mask with a noose around his neck. Had me rollin.” Even after a few sobering tweets from others about the permanence of the Web, Secret Service, his school being contacted, etc., he repeated the tweet. Taken in aggregate, there seems to be very little idea that racism is wrong.

This Tumblr is becoming the kid version of the racist GOP echo chamber, fomented by the axiom, if adults do it, it must be OK. I have seen this at work myself: I grew up in a rural all-white community in northern Minnesota and remember how some adults made casual racism seem familiar, even normal. The black licorice candies at the nice old man’s store were labeled “n----- babies,” the clawlike Brazil nuts in the holiday nut mix were n----- toes, and even eeny-meeny-miney moe was to catch a n----- by the toe. This was the kind of racism passed down from generation to generation, and adults who should know better did not stop it. Some, in fact, did things like scream “Chink!” as they drove by our house, as if we weren’t going to see them in church on Sunday (if only Tumblr had been around then).

What haunts me about Hellothereracists is seeing the pictures of the kids in a more normal context. They look just like kids I knew in school. Most of the ones who called me names or tried to beat me up were actually fundamentally OK kids, loyal friends, good teammates, loved by their families. In retrospect, picking on me often seemed experimental, impulsive, testing boundaries. That’s what adolescence is all about: people wanting to impress their friends, look cool. Moreover, it’s a time of trying on roles, it was clear people wanted to see, well, how racism looked on them. Some, to their credit, rejected it — although it often took doing things like going into the military where they actually had to interact with minorities, and in this context, made the startling discovery that people with brown, black, red and yellow skin are also human beings. Still, better late than never.

Of course, other kids ossified into hardcore racists. One truly scary kid I encountered as a child turned out to — surprise! — have a very scary racist father who kept Jon’s hair shorn in a brutal buzz cut (“my old man wants it that way”), and I recently found out Jon, forever unreconstructed, died years ago, possibly violently. But even scarier than the shorn-headed kid were the calculus teacher who said he didn’t like my yellow skin, his twin brother who made fun of my school picture in front of the class, the chemistry teacher making jokes about Asians eating dogs. This they did with the wink-wink to the other (white) kids, thereby teaching them their conception of a racial hierarchy where whites are allowed to physically and emotionally injure minorities.

In this ongoing culture war, “urban” now means black, and “rural” thus has begun to mean white. Yet, in rural white communities, like the one I grew up in, with a lack of actual people of color, from whence comes this racism that the GOP so desperately courts? An acquaintance who teaches at the community college there dashed off a quick email exclaiming, “How did you LIVE here? People are so anti-Asian, and there aren’t even any Asians here!”

It’s useful to recall the obsolete theory of spontaneous generation, whereby scientists once believed living organisms could spring forth without an antecedent from other living organisms, e.g., maggots magically burst from rotting meat. The maggots didn’t magically appear, microbiology tells us they came from the flies buzzing around the carrion. Similarly, the junior racists didn’t come up with this on their own, the infection is contracted from adults and metastasizes in the presence of Fox News and in the voice of Rush Limbaugh. It’s a cultural sickness exemplified in Megan Beyer, a kewpie-faced girl in Cypress Texas who adoringly writes that her dad, whom she no doubt loves, is quitting his job and dedicating his life to assassinating the president. Chuck Marchese, a 2011 high school graduate, eloquently requests on Twitter, "SOMEBODY ANYBODY PLEASE SHOOT THAT N----- NOW!!!!!" while his father grouses via text, “At least the snow is still white in this country” — the son proudly declaring, “And people wonder where I get it from!” They shouldn’t wonder.

Politicians and other cultural figures are stokers of the racist fire, and those who are merely confronted with racism but do not stop it are just as shameable. Who can forget the Sarah Palin rally in 2008 when a woman clearly shouted “Kill the n-----!” while the vice-presidential candidate blithely went on; not only did Ms. Palin go on with her speech but also wink-wink courted this kind of “passion” in subsequent rallies.

One day, I came into the college seminar room where I teach to find the students trying to squash a poor, dazed honeybee that had flown in through the window. I made them back off, scooped the insect up with a piece of paper, and released it outdoors. I let the students off without a lecture of the necessary nature of pollinators or the wrongness of killing a living being for no reason (also, no one was allergic). Instead, I took a moment to let the wrongness settle, like dust, until one of the attempted bee-assassins said, ashamed, “Thank God there’s one adult in the room.”

It’s up to adults to stand up to the cancer of racism — if anything, to protect the children we so claim to love. The kids in Hellothereracists are a photo album of young lives already starting on the wrong foot. As long as we allow racism, veiled or otherwise, to seep its poison into the political and cultural discourse, this, our country has little chance of standing as a unified whole. If the Republicans want to claim the mantle of being pro-family, let it start with them cleaning their own house. As the most famous Republican stated: “A house divided against itself cannot stand.” And for those hotheaded kids on Twitter, I hate to tell them that things have changed since I was a kid. Better be selective which bad behavior of adults that you emulate because a tweet is forever.