Leslie Knope nearly makes a pass at her No. 1 crush. Will she ever overcome her awe to realize her big D.C. dreams? 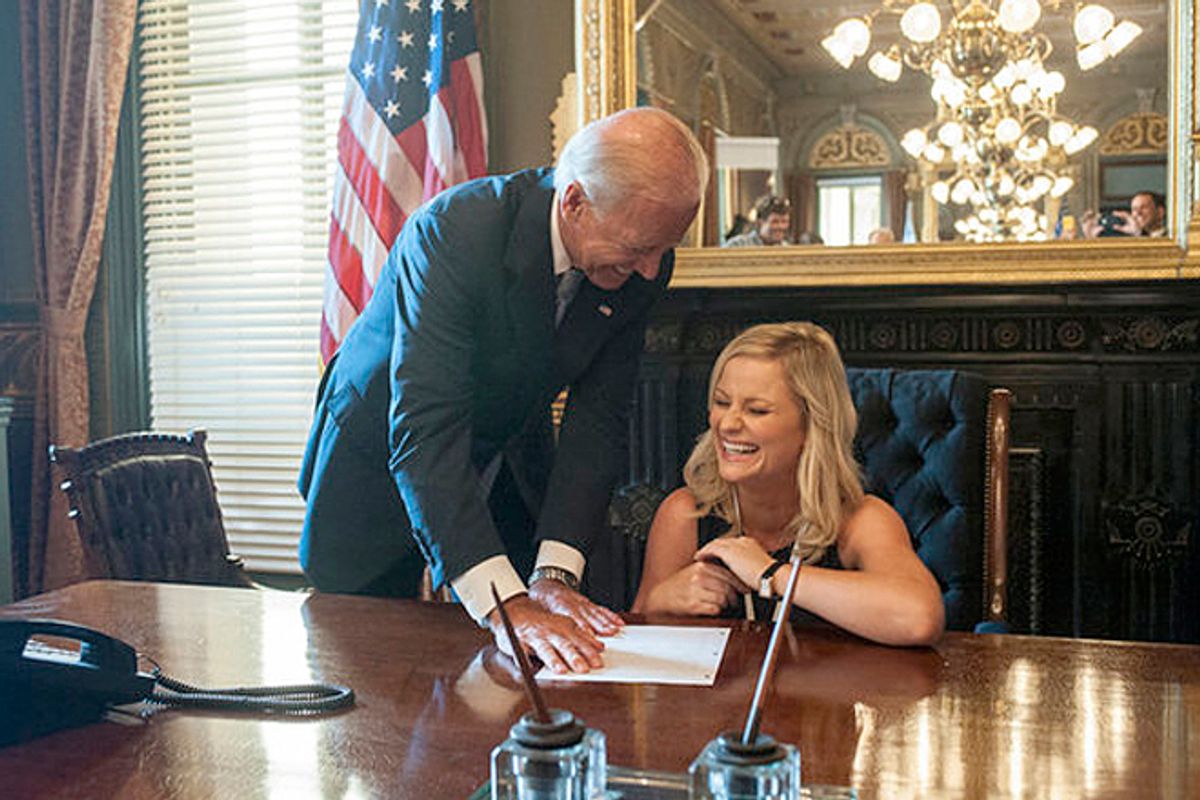 “Parks and Recreation” kicked off this season with a Washington D.C.-set episode and some political star power. Sens. Olympia Snowe, Barbara Boxer and John McCain gamely appeared in the premiere, though they weren’t asked to do much. “Parks” was saving the higher degree of difficulty cameo for Vice President Joe Biden, Leslie’s longtime lust object, who taped a top-secret scene for the show this past summer. Because of regulations about candidates receiving equal airtime, “Parks” had to stay quiet about Biden’s role until after the election, lest they be forced to write a part for Paul Ryan, too. (I’m feeling a flash of regret for the Paul Ryan–Chris Traeger discussion of marathons that might have been.) The scene aired last night and Biden’s natural hamminess made him a perfect guest.

It’s one of the oddities of Leslie Knope’s personality that she thinks Joe Biden is a No. 1 stunner, and always has. Her attraction to the veep is a running joke. Biden’s the kind of guy who warms to this sort of attention, and when he meets Leslie he flashes her a hilarious million-dollar grin. Leslie loses her composure almost instantly: “I can’t believe my name just came out of your mouth,” she blushes, before interrupting the vice-president to say that she’s flattered, but she can’t take Secretary Hillary Clinton’s job. She then inappropriately touches his face — the two hands on the cheek that are the universal television sign for wanting to smooch— and almost leans in to kiss him. Biden takes all this frenzied flirting in stride, making a few “who is this crazy person” faces and leaning away, all while keeping up his end of the patter. He’s pretty smooth. "Parks" creator Mike Schur even told the Times he ad-libbed a bit, which — of course he did. Joe Biden has spent his entire career doing improv comedy, some of it unintentional.

Vice President Biden may be Leslie’s ideal pinup, but this marks the fourth politician she’s behaved like a total loon in front of. (She was in the middle of a mean-girl-induced breakdown when she met Sens. Boxer and Snowe, and was crying so hard in the coatroom when she met Sen. McCain that she didn’t even realize it was him.) Right before meeting Biden she told Ben of her plans to become president in 2024. If that's going to happen, she's going to have to learn to keep her cool. Until then, she can keep trying to stare deep, deep into Joe Biden's eyes.