Pick of the week: The case that unlocked the Catholic scandal

Pick of the week: Alex Gibney's "Mea Maxima Culpa" follows the scandal from one Wisconsin school to the pope's desk 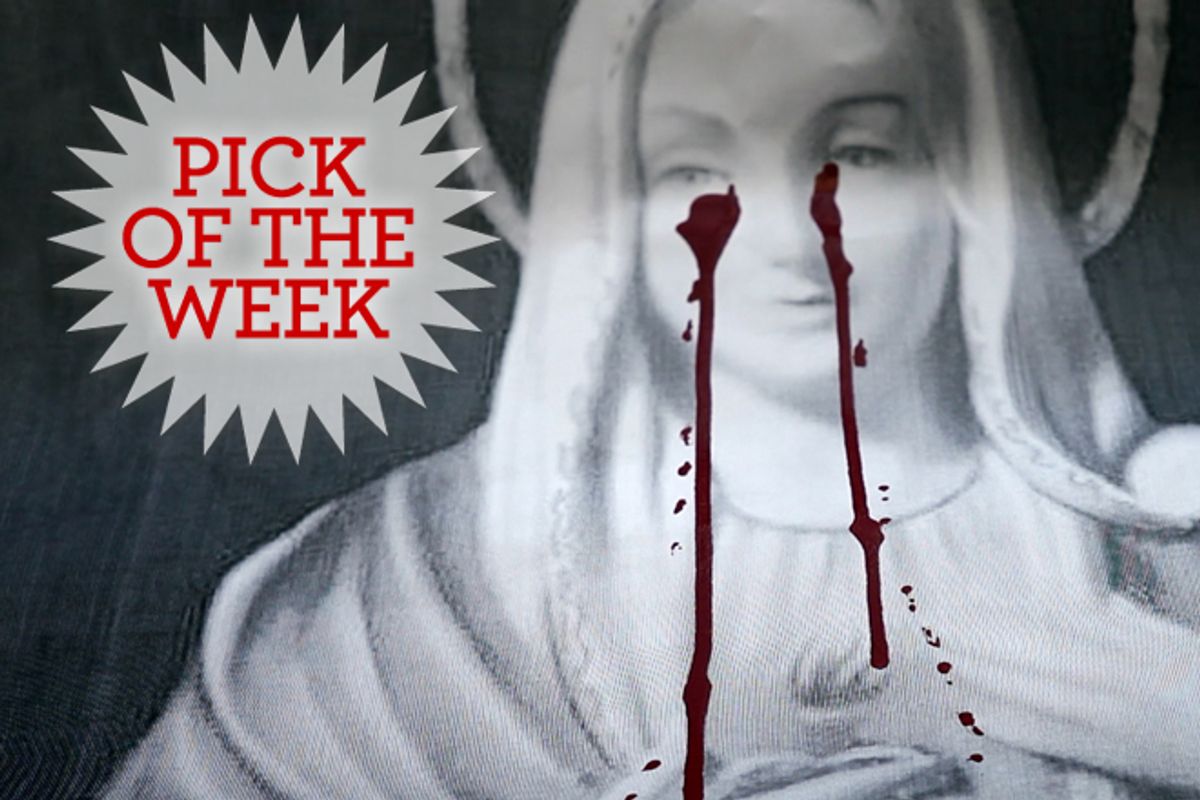 A still from "Mea Maxima Culpa: Silence in the House of God"
--

You can’t argue that Alex Gibney’s “Mea Maxima Culpa: Silence in the House of God” is the definitive treatment of the Roman Catholic Church’s sexual abuse scandal. This problem goes so deep into church history, and its implications are so broad, that no single book or film or series of newspaper articles can encompass it all. But by beginning with one of the earliest and most infamous of documented cases in the United States — the abuse of perhaps 200 deaf boys at a Wisconsin boarding school by a priest named Lawrence Murphy — the Oscar-winning Gibney (director of “Taxi to the Dark Side,” “Enron: The Smartest Guys in the Room” and several other films) is able to suggest answers to certain very big questions.

Ever since the clerical abuse scandal began to break open in the early 2000s, with wave after wave of disturbing revelations and a groundbreaking investigative series in the Boston Globe, certain issues have remained shrouded in mystery. How much did the Vatican hierarchy know about the widespread rape and sexual abuse of children by men who were designated as the earthly representatives of Jesus Christ, and what did they do about it? Was the scandal really limited to the United States and other “Anglo-Saxon” countries, as many Catholics outside North America maintained? Were there few documented cases prior to the 1960s because they did not exist, or because they had been successfully squelched? Of course it was tempting to assume or infer answers to those questions, especially when faced with the world’s largest, oldest and most secretive religious organization, but journalists are supposed to hew to a higher standard than guesswork.

It won’t surprise anyone who’s been following this story over the past decade or so to learn that the partial answers emerging from “Mea Maxima Culpa” pretty much amount to the worst-case scenario on all those questions. While it became Vatican policy early in the scandal to blame the American bishops for their inadequate response to the crisis (and many of them indeed behaved disgracefully), the best evidence now indicates that the hierarchy in Rome heard about virtually every case, and that from 2001 onward most if not all of them went straight to the desk of Cardinal Joseph Ratzinger, who is now Pope Benedict XVI.

It appears that Ratzinger was personally outraged by these crimes — one wonders why, given the prevalence and long history of these things in the church — but his first instincts, like those of every other high-ranking Vatican official, were those of a politician or Mafia don rather than a spiritual leader. Containing the damage and keeping things quiet was paramount; offering compassion, comfort and healing to those who had suffered was an afterthought. It’s now clear that internal systems within the church have long existed for disciplining and reassigning priests accused of sex crimes, but that they were almost never reported to the police and were generally sent back to pastoral duties after a period of supposed penitence.

One of the most intriguing tangents in “Mea Maxima Culpa” involves the Rev. Gerald Fitzgerald, founder of the Servants of the Paraclete, a Catholic congregation established to help priests who were struggling with celibacy, alcoholism and other personal issues. A recently released trove of Fitzgerald’s letters reveals that as early as 1952 he had warned church leaders, including two popes, that there was a nationwide problem with abusive priests, and stressed that he believed priests who committed such crimes could not be cured and returned to their pastoral duties. Fitzgerald favored defrocking them or isolating them in monasteries, rather than turning them over to the authorities. But that would have been infinitely preferable to once again entrusting them with the spiritual care of children, which was what almost always happened in practice.

As usual, Gibney builds his film in collaboration with a journalist who’s been steeped in the issue for years, in this case New York Times religion reporter Laurie Goodstein, who covered the Wisconsin deaf-school case along with the explosive revelations that emerged from it. (As any Catholics or former Catholics among us will already have guessed, the response to Goodstein’s work by ardent defenders of the church has often been tinged with anti-Semitic slander.) But the real collaborators and heroes of this film are men like Arthur Budzinski, Terry Kohut, Gary Smith and the many others who came forward, many years later, to confront both the Catholic culture of silence and the larger society’s prejudice against the deaf community, and expose what had happened at St. John’s School for the Deaf in St. Francis, Wis.

That boarding school, in a small town on Lake Michigan just south of Milwaukee, offered rare opportunities for deaf children and their parents in an era when deaf people were often assumed to be mentally deficient and the teaching of American Sign Language was far less widespread than it is today. Murphy worked there from 1950 to 1974, and served as the school’s director for much of that time. By all accounts, he was extremely well qualified: A hearing man who could sign in fluent ASL (extremely unusual in those days), he was regarded as a wonderful teacher and an inspiring spiritual leader.

Murphy was also a serial sexual predator who exploited his unlimited access to a population of isolated and vulnerable children, and who apparently lacked any ability to restrain himself or consciousness of wrongdoing. In a document that was brought to light years later, a psychologist evaluated Murphy as suffering from a severe cognitive disorder, and noted that he offered various incoherent justifications for his behavior. (These included the suggestion that he was providing informal sex education by fondling the boys, and was also “fixing the problem” of homosexual experimentation in the dormitory.)

Much of the drama in “Mea Maxima Culpa” concerns how adult survivors of Murphy’s abuse eventually banded together in the 1990s and 2000s and brought the story to light. But in terms of the depth and breadth of the entire scandal, it’s even more striking that some boys began complaining about their pastor to other priests and authority figures as early as the ‘50s, when such allegations would have seemed completely outlandish and deaf kids had limited means of communication with the hearing world. As a 2010 Times story by Goodstein and David Callender put it, “They told other priests. They told three archbishops of Milwaukee. They told two police departments and the district attorney. They used sign language, written affidavits and graphic gestures to show what exactly Father Murphy had done to them. But their reports fell on the deaf ears of hearing people.”

Gibney spins a tale here that is partly an inspiring saga of growing “deaf power” and human resilience, and partly a murky and fragmentary drama about an immense, closed-minded bureaucracy with paranoid and conspiratorial tendencies that finds itself unable to adjust to the modern world. As we now know, the case at St. John’s School was hardly isolated, and neither was the first wave of American cases. Gibney also visits Ireland, a nation whose long and intimate relationship with the church has virtually collapsed in the wake of numerous horrific scandals, and Italy, where an alarmingly similar scandal emerged at a deaf school in Verona. As Goodstein observes, if Catholicism is fading in the Northern Hemisphere, it’s still growing fast in the developing world, and there is no reason to believe that abuse scandals will be far behind.

Whether the Catholic Church’s central problem is one of fundamental human nature or the shifting tides of modern culture is a matter of opinion, but as one Vatican observer says in the film, the celibate priesthood has become a mechanism for selecting, training and protecting perverts and abusers. I’m just old enough to have been raised in the faint liberal afterglow of Vatican II, and my father, a tormented and doubting Irish Catholic who never quite let go of his faith, taught me to believe in a forgiving, progressive church that was preferable to the alternatives, whatever its flaws. That era seems long gone now in so many ways, and I find myself feeling almost grateful that my dad isn't here to see what the church has become. Perhaps the horrors of the sexual abuse scandal, which now appears worldwide and all-pervasive, will serve to illustrate the fundamental hypocrisy of an organization that seems determined to drag humanity back to the Dark Ages, or die trying.

"Mea Maxima Culpa: Silence in the House of God" begins a theatrical run this week in major cities, and will air on HBO in February 2013.