Rape is not a "fashion violation"

A victim of designer Anand Jon, a convicted rapist, reacts to W magazine's glib headline about his criminal trials 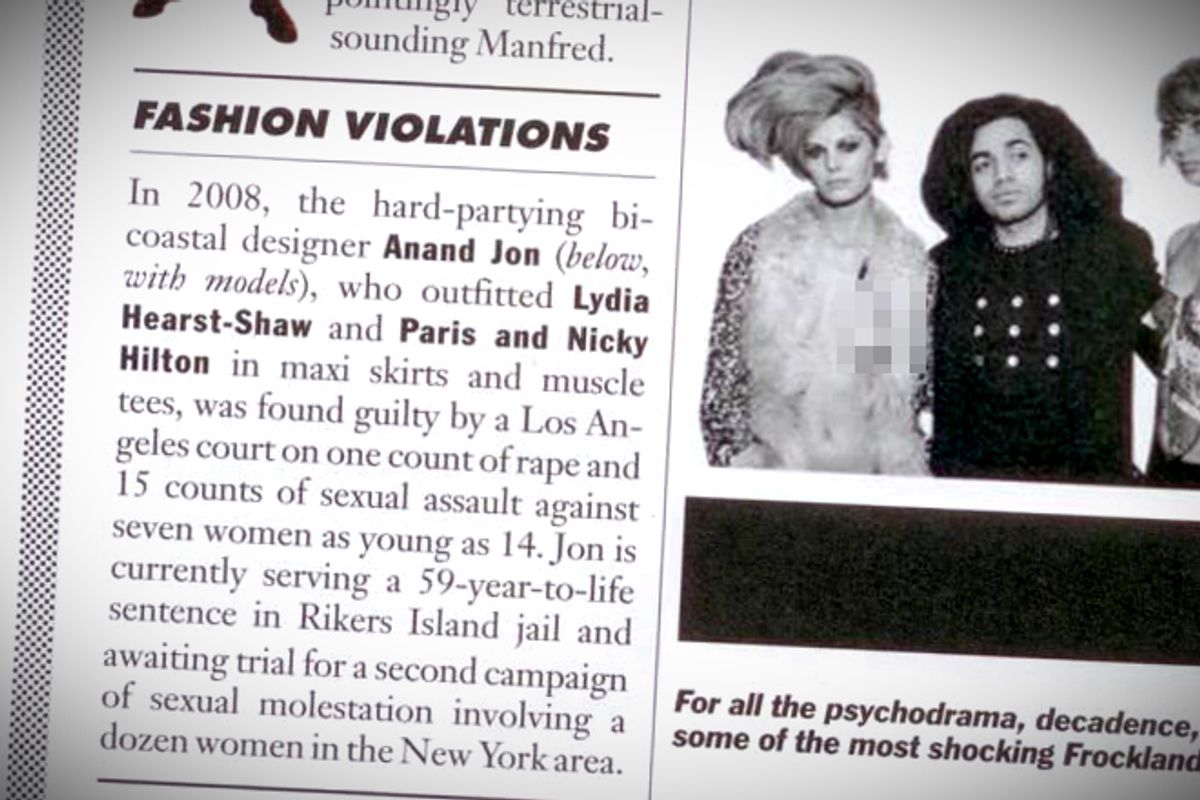 Tucked in the left column of Page 238 in the November 2012 issue of W Magazine (Collectors’ Edition) is a picture of fashion designer Anand Jon bookended by models scarcely clad in boas and sequins. The picture accompanies a blurb titled “Fashion Violations,” though the violations to which the blurb refers do not pertain to lipstick-stained teeth or the kind of clashing ensemble Joan Rivers prays for. Rather, it refers to the one count of rape, and 15 counts of sexual assault on girls as young as 14 that landed Jon a 59-year-to-life sentence in jail. And that’s just his punishment thus far. Jon has yet to stand trial in New York and Texas to face similar allegations.

As one of the girls (I’m now 27) Jon raped, who has already testified in his L.A. trial and is again due to testify in his upcoming New York trial, I was shocked by this sliver of glib print. How could W Magazine equate an act like rape with something as casual as a fashion faux pas? Whoever chose that wording probably didn’t mean to trivialize rape, but in searching for a cheeky play on words, ended up settling for something that falls somewhere on the spectrum between ignorant and offensive. It was apparent that the matter of greatest interest for W magazine was not so much rape, or the number and youth of the victims. What was more magnetic is that a designer who dressed the rich and famous had fallen from grace so epically. I was reminded of the televising of the OJ trial, when Nicole Brown Simpson’s and Ron Goldman’s very real deaths were marginalized by the media circus surrounding the downfall of a national sports hero. When such media fascination is involved, victims become barnacles attached to a once-magnificent sinking ship. The more barnacles, the more sensational the wrongdoing, the more people gawk.

It’s unfortunate that a social epidemic of such grand proportion needs a celebrity (and not even a celebrity supporter, but a perpetrator) to get any attention, and that when it does get attention, everyone loses sight of the real disaster. Because when all the focus is on the famous offender, stories that are really so close to home seem otherworldly. But rape is a real issue that affects real men and women. In 2011, the U.S. Center for Disease Control and Prevention reported that nearly one in five women has been raped at some time in her life (and of course, that only accounts for those willing to self-report the incidents). When I was raped at 17, I never considered that something like that could happen to me. From what I knew, rape was something that happened to people in movies, or that popped up on the 10 o’clock news with the frequency and discreteness of a plane crash, or a taboo word on a flier taped to a gas station bathroom stall that offers a 1-800 number and promises anonymity. But rape is an issue that should be on every person’s radar and exposed for its jarring routineness so that victims feel less isolated, less trapped, and can start to overcome their feelings of fear, shame and degradation in the wake of their objectification.

My rape stayed with me long after the physical event because of the apprehensions it begat: What if he rapes me again as punishment for coming forward? Will people blame me? What if he denies it? Will people look at me differently, as if I were tainted? Now, after speaking with others who survived similar ordeals, I know these are quintessential fears of a rape victim. And the clamor of these questions is only amplified when the rapist is in the public eye, and has supporters (supporters who have supporters, no less), supporters who denigrate you, posting twisted versions of your testimony on websites with untraceable origins. But without a doubt, coming forward was the right decision. To imagine all those years I tried to unmake my rape is astounding.

It is hard for me to watch fear and shame, both products of ignorance, persist in silencing rape victims. It was only when another victim of Jon’s came forward that I gained the strength to come forward myself. In doing this, I learned that a victim can only become a survivor by sharing his or her story. And it’s not a coincidence that so many victims are still living in the shadow of rape — or, as W Magazine considers mine, a “fashion violation.”

Tara Kipnees is a writer living in New Jersey with her husband and 1-year-old daughter, and worked for Sotheby's and the Worldwide Orphans Foundation before founding the online literary forum Voices in Space, www.voicesinspace.com.