Arizona elections still not over as suspicion builds

Over 100,000 votes still haven't been counted, and activists fear Latinos' votes have been suppressed 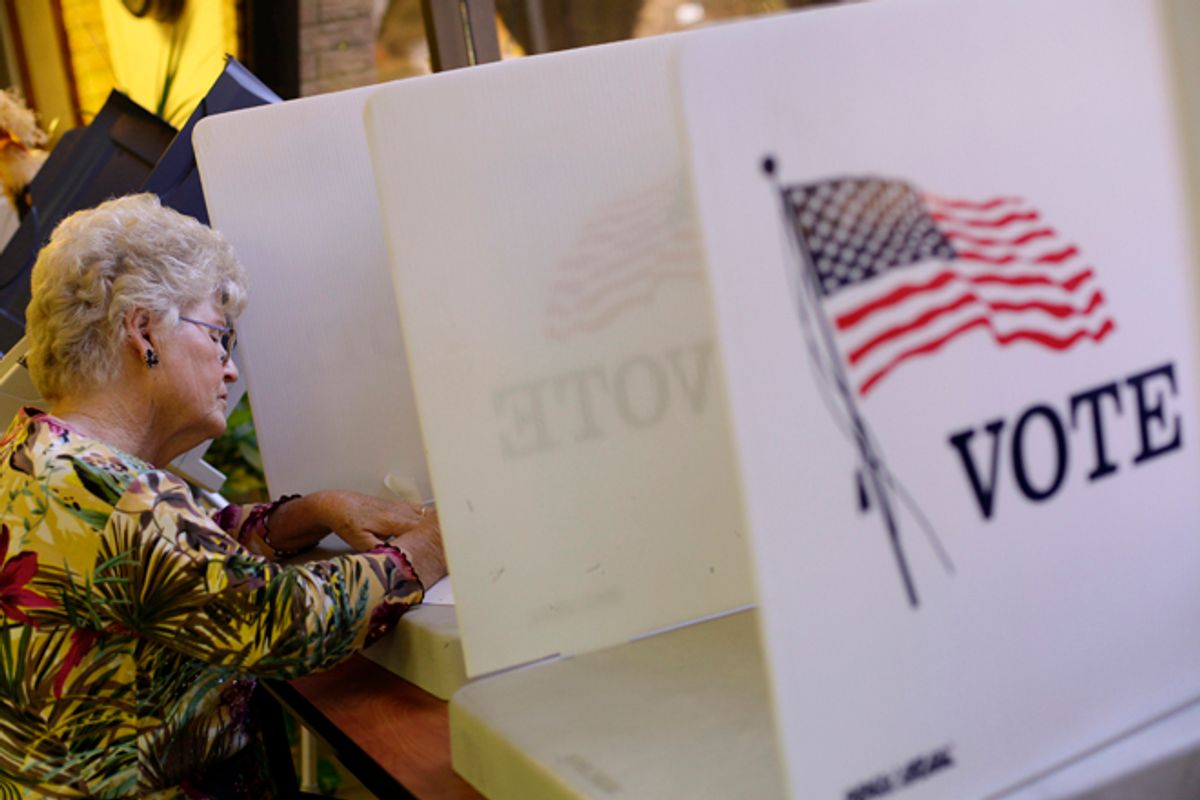 A voter fills out her ballot during early voting at the Gila County Recorders office in Globe, Arizona October 26, 2012. (Reuters/Joshua Lott)
--

The election may have ended almost two weeks ago, but in Arizona, it goes on. Perhaps it’s fitting for a state with its own time zone, but as of last night, there remained over 100,000 uncounted votes in the state’s two largest counties, leaving election officials unable to officially certify the results of a number of the state’s high profile races, including the Senate race, several House contests, and Maricopa County Sheriff Joe Arpaio's reelection bid. Friday was the deadline for counties to finish counting ballots, but the state blew past it yesterday when Maricopa, which contains Phoenix, and Pima County, which contains Tucson, said they needed more time.

In most cases, the margins are the large enough by this point that candidates have declared victory or conceded defeat, even if the results aren’t official. And late Friday night, the Arizona Republic newspaper declared Democrat Ron Barber the winner in the highest profile race outstanding, the one to replace Democratic Rep. Gabby Giffords. That contest had been too close to call for over 10 days, with fewer than 1,000 votes separating Barber from Republican Martha McSally, but the remaining outstanding ballots come from heavily Democratic areas so the paper was able to project Barber's victory.

In the state’s Senate race, Republican Rep. Jeff Flake has a large enough lead over Democratic former Surgeon General Richard Carmona that even Democrats concede a win is probably out of reach, though not entirely impossible. The same goes for Arpaio’s race against Democrat Paul Penzone.

The pace of ballot counting has drawn the ire of young Latino activists, who spent the summer and early fall registering voters in a grassroots campaign to oust Arpaio. Hundreds have been picketing almost around the clock outside the Maricopa County Recorder’s Office, which counts ballots, in downtown Phoenix. “Even the State of Florida, widely considered to be the poster child of dysfunctional election administration, completed its vote count several days ago,” Brendan Walsh, the chairman of the union-backed Adios Arpaio political action committee wrote in a letter to Arizona Secretary of State Ken Bennett.

Senate Majority Leader Harry Reid issued a statement last week on the issues, writing, “I expect state and local officials in Arizona to ensure that every vote is counted promptly, accurately and equally.”

MSNBC host Rachel Maddow highlighted the “broken-on-purpose election” Tuesday, noting that Maricopa County had sent out erroneous notices in Spanish saying election day was November 8, two days after the actual date, and that it had closed a number of polling stations despite long lines in 2008 due to budget cuts.

Indeed, “suspicion swirls in some corners that certain Arizonans were deprived of their vote,” Arizona Republic columnist Laurie Roberts wrote Wednesday. Arizona House Minority Leader Chad Campbell, a Democrat who represents Phoenix, has called for a non-partisan investigation to look into irregularities. “I’ve heard countless stories...of very odd experiences,” Campbell told Roberts. “There are some irregularities that concern me. My bottom line: if the system is actually working the way it’s supposed to, if there’s nothing that went wrong, then we probably need to look at redesigning the system.”

In a letter to state election officials, The American Civil Liberties Union of Arizona expressed "grave concerns about remaining uncounted ballots and the process by which many voters were required to use provisional ballots,” saying that a "disproportionately high numbers of provisional ballots issued to minority voters."

One of the big issues is that many voters who requested absentee ballots to vote early, which anyone is allowed to do in Arizona, said they never received a ballot in the mail. When they showed up at the polls to try to vote on election day, they had to do so on a provision ballot, leading to a glut of them unprecedented in the state’s recent history. Daria Ovide, a spokesperson for the Adios Arpaio campaign, told Salon the problems appear to especially concentrated among new voters and Latinos.

Still, officials have maintained that there’s nothing unusual about this year’s election, even as it takes longer than usual to count all the ballots and the state flew by its deadline to finish counting. "Interestingly, what's playing out this year is almost identical to what played out four years ago," Secretary of State Bennett told a radio program yesterday.

So when will this be resolved?

“Statewide, they’ll be lucky if they get it done by Thanksgiving,” Frank Camacho, the communications director for the state Democratic Party, told Salon. Maricopa County tabulated 5,257 early ballots and 6,060 provision ballots Friday, but as of about 6 p.m., there remained 1,200 early ballots and a whopping 97,000 provision ballots. “If they’re only doing 1,200 ballots a day, it’s going to take them forever... It seems like they’re slowing down instead of accelerating. I’m not sure why,” Camacho said.

He said the party was keeping an eye on potential irregularities, but wanted to focus on finishing the vote counts first. “We don’t necessarily think that there were dirty tricks, but we’ve also heard those stories and we’ve heard those complains. And, officially, we’re saying that the questions that need to be answered should be answered after all the votes are counted.”

“There have been some peculiarities that have cropped up and if one was inclined to believe it, they could say, yeah, the problems seem to be concentrated with Latinos...but we’re not going to say that until we have an investigation,” he added.

Dirty tricks or not, it's clear the system hasn't worked properly.

Camacho said one of his biggest fears at the moment is that the state’s Republican lawmakers, who brought us the SB-1070 immigration law and a panoply of other right-wing hobby horses, will use the problems to go after early voting, a common conservative bugaboo.  That, he said, would be a “real tragedy and travesty of justice."