School-reform advocate touts her "bipartisan" bonafides, but more and more of her allies are conservatives (UPDATE) 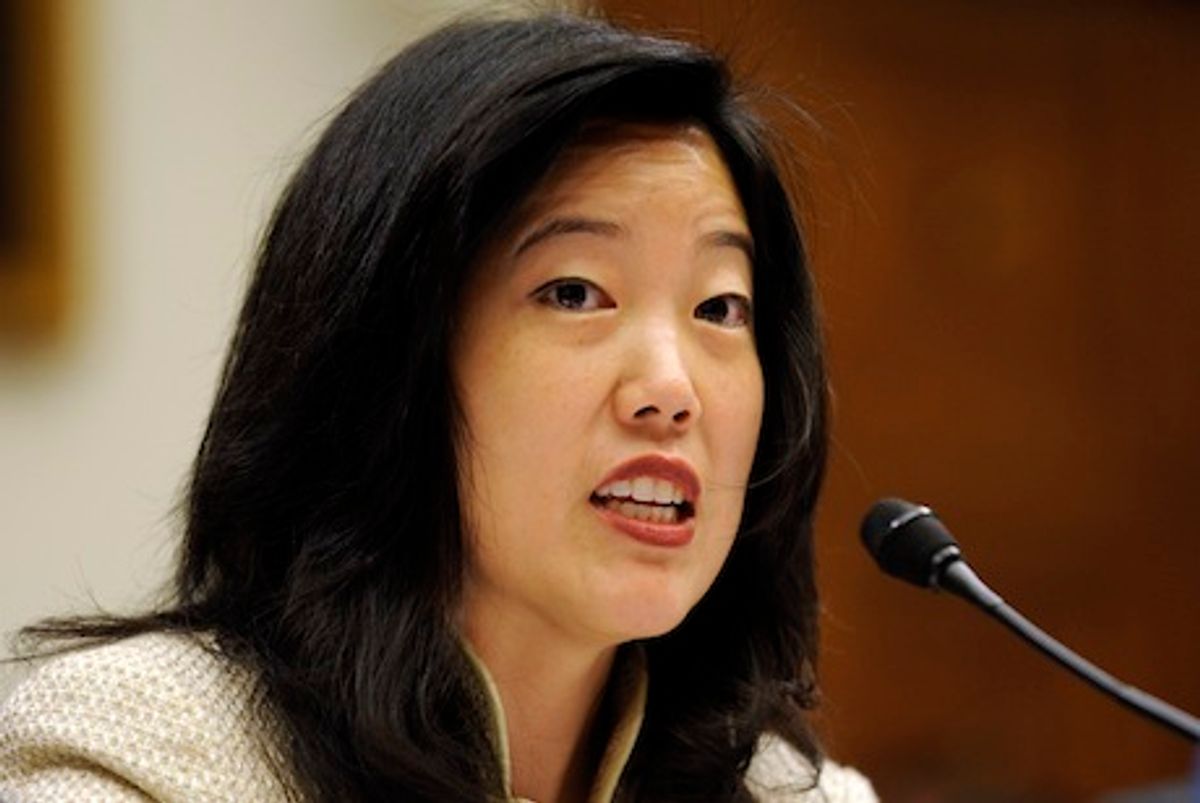 Nov. 6 was a good day for Michelle Rhee. The former Washington, D.C., schools chancellor, through her organization StudentsFirst, poured money into state-level campaigns nationwide, winning 86 of 105 races and flipping a net 33 seats to advocates of so-called school reform, a movement that advocates expanding privately run public charter schools, weakening teachers' unions, increasing the weight of high-stakes standardized tests and, in some cases, using taxpayer dollars to fund private tuition through vouchers as the keys to improving public education.

Rhee makes a point of applauding “leaders in both parties and across the ideological spectrum” because her own political success -- and the success of school reform -- depends upon the bipartisan reputation she has fashioned. But 90 of the 105 candidates backed by StudentsFirst were Republicans, including Tea Party enthusiasts and staunch abortion opponents. And Rhee's above-the-fray bona fides have come under heavy fire as progressives and teachers unions increasingly cast the school reform movement, which has become virtually synonymous with Rhee's name, as politically conservative and corporate-funded.

Rhee, who did not respond to an interview request, is an adept fundraiser and organization builder. In October 2010, she was nudged out after a stormy tenure as the head of D.C.'s public schools (she closed dozens of failing schools, fired more than 1,000 teachers and principals, and went toe-to-toe with unions over issues like teacher evaluation and tenure).  On the very same day, she launched a new personal website and social media operation and then quickly embarked on a series of television interviews, announcing the creation of StudentsFirst on "The Oprah Winfrey Show" that December. "I am going to start a revolution," she told Oprah. "I'm going to start a movement in this country on behalf of the nation's children."

Today, StudentsFirst is active to some degree in seventeen states. (Most education policy making happens at the state level.) In Washington, Rhee already can count on support from many Republicans and from Obama's Education Secretary Arne Duncan, whose Race to the Top program leveraged billions in federal grant dollars to encourage states to remove restrictions on charter school growth and put more weight on standardized testing in teacher evaluation -- both top Rhee priorities.

Rhee's popularity among political political elites and media outlets is formidable: She is a frequent guest on national television and at events around the country where she charges up to $50,000 per appearance.“The interesting thing is there's a lot of groups that are trying to play that role, and Michelle's celebrity gives StudentsFirst certain assets in that conversation,” says Rick Hess, an education scholar at the conservative American Enterprise Institute.

Though state-level operations appear to be in their embryonic stage, StudentsFirst has an ambitious set of goals -- to limit seniority protections for teachers in California, Connecticut, and Georgia; expand charter schools in Iowa and New Jersey; promote high-stakes standardized tests for purposes of teacher evaluation in Nevada and Minnesota; implement merit pay for teachers in Indiana and Michigan; and pass “parent trigger” laws, such as the one touted in the recent propagandistic pro-school reform movie “Won't Back Down,” in Florida, which would allow parent referendums to convert public schools to charters.

But StudentsFirst, and indeed the whole "school reform" agenda, has its critics. Teachers contend they are being blamed for poor academic achievement that has poverty, budget cuts, funding inequity, and segregation at its roots. Educator job dissatisfaction levels this year reached their highest level since 1989, and critics say the increasingly high stakes of standardized tests have fueled the explosion of cheating scandals in districts nationwide. (Rhee herself has refused to address still-unanswered allegations that impressive test numbers racked up during her Washington relied on cheating.)

Meanwhile, according to the dictates of "reform," arts, social studies, humanities, science, physical education and even recess are being squeezed out of the school day to make time for test preparation. And charters, touted by Rhee as an alternative for low-income students of color being failed by public schools, have not, as a whole, outperformed their public counterparts, even as they have siphoned public dollars from districts that desperately need them. While some charters have boasted high test scores and graduation rates, many others are beset by financial mismanagement or corruption.

“It does strike me that there's an emergent backlash, that maybe things are slowing down, that maybe people are getting a little more skeptical,” says Rutgers Graduate School of Education Professor Bruce Baker, “Maybe people are becoming aware that legislation is being created by external groups and passed around.”

Baker points out that Rhee's agenda is supported by the notorious American Legislative Exchange Council (ALEC), an organization composed of conservative state legislators and businessmen that formulates and circulates model laws in statehouses nationwide.

StudentsFirst also spent heavily on ballot measures this year, including $500,000 to oppose a failed measure that would have added the right to collective bargaining to the Michigan constitution, $250,000 to support a successful Georgia measure decreasing local control over charter schools, and $200,000 to oppose a successful Idaho measure repealing a law that undermined teacher's collective bargaining rights. They spent at least $427,000 on Tennessee state elections.

Rhee has pledged to raise $1 billion for StudentsFirst, a not implausible figure given the big money backing the school reform agenda. Organizations like Stand for Children, the right-wing American Federation for Children, and the Wall Street-backed Democrats for Education Reform have poured significant funds into campaigns advancing the school reform agenda. But no individual in the movement has a higher profile, including on the donor circuit, than Rhee.

StudentsFirst has received funding from Mayor Michael Bloomberg, the hedge fund-funded Laura and John Arnold Foundation, Charles and Helen Schwab Foundation, the Broad Foundation and the Walton Family Foundation, according to Reuters. Broad and Walton, along with the Bill and Melinda Gates Foundation, have been the key three philanthropists behind myriad reform initiatives. In New Jersey, hedge-fund managers and Romney fundraisers David Tepper and Alan Fournier are lead funders."There is no budget," New Jersey state director Derrell Bradford told Reuters. "They are willing to spend whatever it takes."

The “school choice” movement has deep conservative roots, and it has been successful in large part because it has sought to portray itself, and in many cases accurately, as a bipartisan effort. But the association of Rhee, a self-described Democrat, with conservative and polarizing figures, could prove dangerous to her brand — and to Democrats like Obama and Chicago Mayor Rahm Emanuel, the president's former chief of staff, who embrace it. (In the wake of the Chicago teacher's strike earlier this year, Rhee praised Rahm Emmanuel, saying it was “commendable and telling that a Democratic mayor was willing to take on special interests in his own party [i.e., teachers unions] to fight for the civil rights of children.”)

In 2010, Rhee headed conservative Florida Gov. Rick Scott's education transition team, and soon after, she was with New Jersey Gov. Chris Christie at his State of the State address. She traveled to Ohio to watch Waiting for Superman with anti-union Republican Gov. John Kasich, a state with a StudentsFirst director who previously worked for the pro-voucher School Choice Ohio. Before the presidential election, Rhee was mentioned as a possible Education Secretary in a Romney administration.

Wisconsin Gov. Scott Walker's communications director quietly proposed bringing Rhee to the state after he unveiled his controversial plan to restrict public employee collective bargaining rights. She stayed away from Wisconsin, likely knowing an appearance would be toxic to her reputation with Democrats. But she did defend Walker on TV.

In Pennsylvania, a laboratory for corporate-model reform, StudentsFirst hired Ashley DeMauro, who served as the Department of Education government relations chief under Republican Gov. Tom Corbett. Corbett has made deeply unpopular cuts to public education, instituted a school vouchers-like tax credit, and is pushing for a massive expansion of charter schools statewide.

“Pennsylvania needs people who can collaborate, build alliances, and stay focused on how we as a nation can create scalable, sustainable models for effective public education in high poverty communities,” says Lawrence Feinberg, co-chairman of the Keystone State Education Coalition and a critic of privatization. He notes that Rhee once invited a PBS camera crew to watch her dismiss a principal: “I don't believe that firing educators on TV facilitates that effort.”

Conservative managing directors at the Pennsylvania-based investment firm Susquehanna International Group have been key supporters of StudentsFirst PAC, a separate pro-voucher organization with a similar name. It is not clear if they have donated to Rhee's outfit, but Rhee, according to Reuters, made two appearances before the group last year.

The organization has made the greatest splash in New York, where StudentsFirstNY, formed this spring, has entered a heated fight over the legacy of Michael Bloomberg's education policies. Where one stands vis a vis the group has become a litmus test for likely mayoral candidates.

“The group believes that the Bloomberg administration has been by far and away the most supportive of the policies they support — stricter accountability for teachers and schools, more charter schools and the elimination of tenure and seniority protections,” says Geoff Decker, a journalist for Gotham Schools who has covered the group. “They want to make those policies a part of the election season conversation and push candidates to adopt positions on those issues."

Both Public Advocate Bill de Blasio and City Comptroller Jason Liu have said they would not accept the group's money or endorsement. City Council Speaker Christine Quinn, an ally of Mayor Bloomberg and a likely front-runner for mayor, has said that she will accept both StudentsFirstNY and union donations. Bill Thompson, the former head of the New York City Board of Education who challenged Bloomberg in 2009, raised concerns about the group's political allegiances but did not rule out accepting donations.

The Bloomberg operation is lining up to support Rhee. The mayor's state legislative director Micah Lasher stepped down to lead the group, and former schools chief and current News Corporation executive Joel Klein serves on the board. So do charter school head and former councilwoman Eva Moskowitz, former mayor Ed Koch, Harlem Children's Zone founder Geoffrey Canada of "Waiting for Superman" fame, and Romney adviser and (yes) Campbell Brown husband Dan Senor, along with what the New York Times calls “a number of venture capitalists and hedge fund managers, who have served as the movement’s financial backers.” The New York group, according to the Times, aims to raise $10 million-a-year for five years.

Michelle Rhee is back, she's organized and she has got loads of cash and high-level political support. But as the education debate increasingly polarizes between right and left, Rhee's conservative friends might prove to be political  liabilities.

Update, 10/3/14: This post initially referred to conservative "hedge fund managers" at Susquehanna International Group, but should have said "managing directors" at the Pennsylvania-based "investment firm." It has been updated to reflect this change.