Hedge funds took profits and piled on millions in debt at Hostess. They created this bankruptcy, not unions 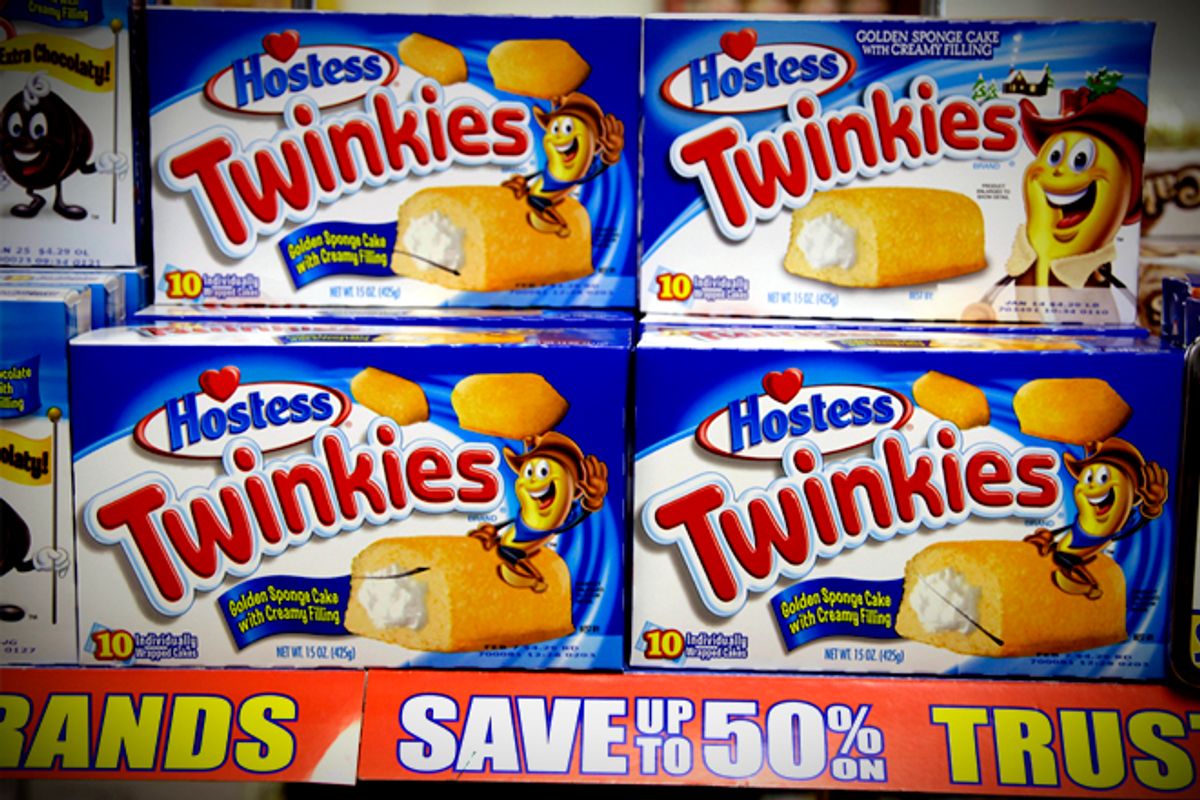 As the final Twinkies, Sno-Balls and those glowing orange cupcakes were stuffed with cream and wrapped in cellophane on Friday, the business world and much of the news media knew who was to blame for this dying American icon. It was the unions.

The Wall Street Journal described the Bakery, Confectionery, Tobacco Workers and Grain Millers International Union as “The union that brought the 85-year-old baker of Twinkies and Wonder Bread to its knees.” Over at RedState, a headline tried to mix anti-union sentiment with conservative humor: “The Demise of Twinkies? Yes, It’s True. Parasitic Unions Kill Their Hosts (or, in this case, Hostess).”

As Hostess moved to end its operations last week -- a bankruptcy judge asked the company Monday to try mediation with its unions; those talks are scheduled to begin today -- commentators were eager to blame the rigidity of unions.

But the story is far more complicated than that -- and in some ways, the exact opposite of the tale pushed by those on the right. It's the story of two bankruptcies, hundreds of millions of givebacks from Hostess unions and hundreds of millions of debt piled onto the company by venture capitalists. It's a story of management that boosted its own salaries, while failing to make agreed payments into workers' pension funds. And it's a story of changing tastes and diets.

To begin with, when was the last time you ate a Twinkie or chose spongy Wonder Bread over an artisanal or organic load? The company simply hasn’t been able to adequately compete due to a stodgy, moribund management that did not act to diversify a product base that hasn’t changed with the times (unless you count 100-calorie Twinkies packs). As the New York Times reported way back on Sept. 23, 2004, “People are still eating Hostess Twinkies and Wonder Bread, but the problem for Interstate Bakeries is that they are eating less of them.”

For all these reasons, Hostess (then known as Interstate) initially entered bankruptcy in 2004, with uncomfortably close to half a billion dollars in debt. Sixty percent of the debt was owned by hedge funds Silver Point Capital and Monarch Alternative Capital, the rest by an assortment of other lenders. No one who was paying attention to the company’s fortunes was surprised by the move. During the nearly five years of its initial bankruptcy, the company accrued even more debt.

As these conditions lingered the workforce agreed to massive pay and benefit cuts in an attempt to keep the company afloat. One 14-year veteran of the company describes the $150 million annual givebacks the union agreed to: “In 2005, before concessions I made $48,000, last year I made $34,000.” Pensions and healthcare were cut as well, with labor’s total loss equaling $110 million annually.

Following these massive givebacks, a private equity company called Ripplewood Holdings brought the company out of bankruptcy in 2009 for $130 million and rechristened it Hostess Brands. The hedge funds and other lenders forgave some old debt and extended some new debt. Ripplewood convinced the other stakeholders that it could turn the company around and, apparently, convinced them so completely that only Hostess Management and Ripplewood had seats on the board. Neither the unions nor the hedge funds acquired voting seats as part of the deals struck to keep the company afloat. They just trusted Ripplewood to turn things around, implement new technologies, introduce new products, and rebuild aging infrastructure.

That’s not how things worked out.

“Ripplewood just failed miserably on implementation,” says Eileen Appelbaum, a senior economist at the Center for Economic and Policy Research. “It’s been a disaster. Ripplewood did not know what it was doing. They did not introduce any successful new products. Sure, they had high sales revenue but it had been declining since 2004.”

As a result of management that still hadn’t really attempted to adapt itself to new market realities, the company earned profits in 2011 of $2.5 billion: That’s 11 percent less than in 2008, before Ripplewood took over. But thanks to debt approaching $1 billion, Hostess ended 2011 with a loss of $341 million. The CEO who led the company back into bankruptcy? He got a pay raise -- while Hostess pushed a 30 percent salary and benefit cut onto its employees. (A previous failed chief executive, Brian J. Driscoll, was pushed out, but only after the board tripled his pay package to $2.55 million.)

That leaves the unions in one corner and the hedge funds and Hostess management in the other. Management ordered the company to stop contributing to the union pension funds, ignoring their obligations under collective bargaining agreements. They have demanded a new round of concessions, which would have doubled insurance premiums, negated all pension obligations, and slashed pay by 27 to 32 percent. Again, the 14-year Hostess bakery veteran: “Remember how I said I made $48,000 in 2005 and $34,000 last year? I would make $25,000 in five years if I took their offer. It will be hard to replace the job I had, but it will be easy to replace the job they were trying to give me.”

Hostess CEO Greg Rayburn attempted to blame the company’s collapse on its workers and, in a move that seems calculated to add insult to injury, today asked a bankruptcy judge permission to pay executives $1.75 million in bonuses to oversee the dissolution of the company (and 18,000-plus union jobs). And that’s after a round of executive pay raises earlier this year.

The union, meanwhile, faced an increasingly untenable position. Pick your poison: another round of humiliating concessions resulting in poverty wages and almost no benefits, or go down swinging? The latter may not seem sensible to those judging from 30,000 feet, but clearly the bakery workers were sick and tired of giving in -- 92 percent of them voted against accepting the cuts.

“This is the Twinkie cliff that the company drove over: They had fairly extensive (cuts) for a protracted period of time and a failure to adapt to the market,” says Harley Shaiken, labor professor at the University of California, Berkeley. “I think why the bakery union refused these steep concessions is because they didn’t see a credible plan to get the company out of this. They just saw that they were being asked to bear the brunt of the managerial mistakes. There were no good options, just disastrous and catastrophic options.”

Criticism of the Hostess workers seems to be manifested by a more subtle form of union bashing. It’s not that unions are greedy, it’s that they are outmoded, and the Hostess crisis is emblematic of organized labor’s precipitous decline. They are dying because workers don’t like them anymore (so this argument goes), precisely because of situations akin to what is unfolding at Hostess. As Diana Reese noted in the Washington Post, quoting the writer Donna Trussell, "Unions clung to an organizational model more suited to a 19th-century economy than the one we have now. That’s why they’ve lost so many members. When unions protect only their own, and leave over 90 percent of the workforce twisting in the wind, they will inspire more envy than support. Adapt or die.”

The labor economist for the Heritage Foundation makes a similar argument at the National Review: “A unionized firm takes longer to respond to changing market conditions … Over time they wither away. This is why union membership hit a record low in 2012.”

But as we’ve seen, it wasn’t the unions who were inflexible or unwilling to make sacrifices for the good of the company. “In effect, the union, should they give more concessions, is becoming a major investor without representation,” says Shaiken. “Unless they get seats on the board or some other form of input.” (The most recent deal included a minority stake in the company; it remains to be seen if the company is willing to offer greater control to the workers in exchange for more givebacks.)

In a healthier and more just labor system, the Hostess crisis would be seen as the decline of a moribund and dreadfully mismanaged company, not a symptom of organized labor’s malaise.