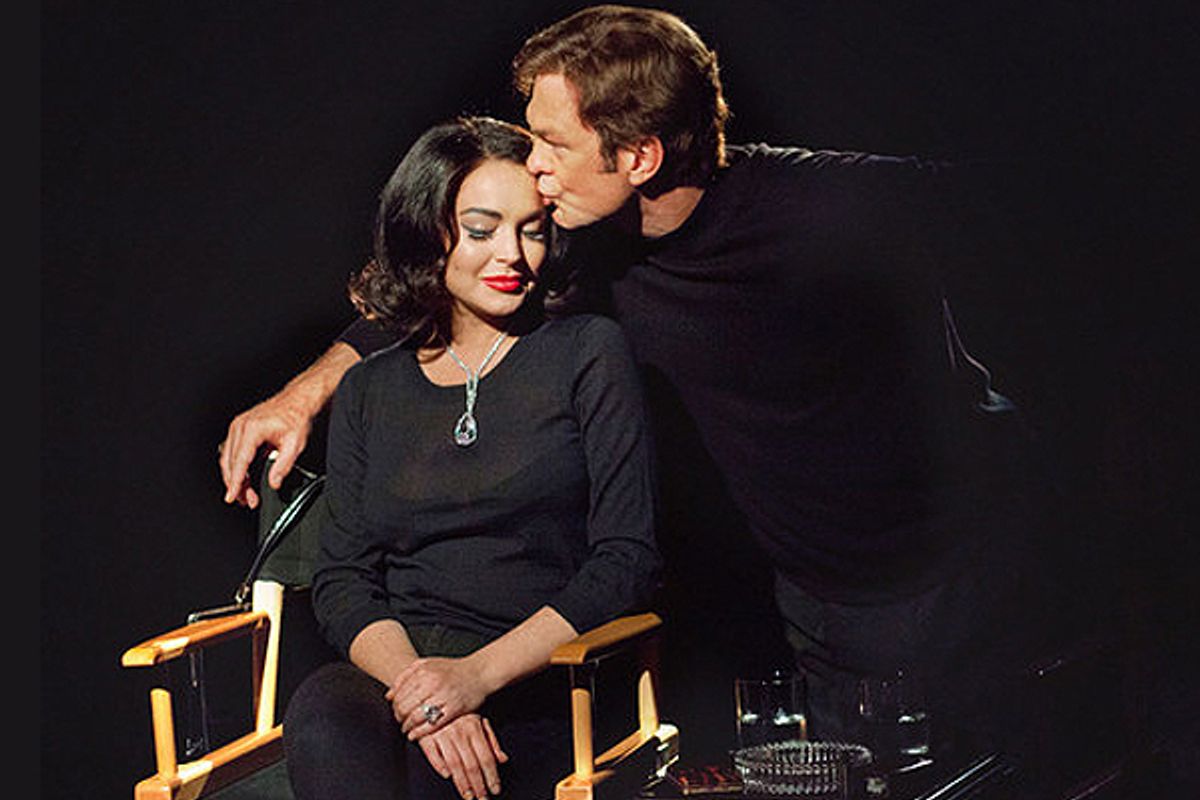 In its review of “Liz & Dick,” the television movie about the storied, passionate, decades long, true lust and love affair between Elizabeth Taylor and Richard Burton — i.e., the Lifetime movie in which Lindsay Lohan plays Elizabeth Taylor — the Hollywood Reporter describes the film as an “instant classic of unintentional hilarity.” I vehemently disagree. There is nothing “unintentional” about it.

“Liz and Dick,” which airs on Sunday night, where it should serve as a perfect final mouthful to a long weekend of binging, is, after all, a Lifetime movie, a camp genre unto itself. The Lifetime movie is where Douglas Sirk lives in infamy, flattered by endless imitation as he rolls over in his grave, mimicked slavishly and poorly, his plots grown ever more sordid, but his earnestness never topped. A movie in which Lindsay Lohan-as-Elizabeth Taylor regularly lectures the camera about how she and Richard Burton (Grant Bowler) invented paparazzi and the celebrity photo frenzy, a movie in which Lohan-as-Taylor downs a bottle of pills and booze and sobs through the resulting dangerous, but entirely manipulative suicide attempt, a movie in which Lohan lies on a bed with cucumbers on her eyes even as said eyes are drenched in her infamous Cleopatra makeup is ridiculous, yes, but it is not unknowing. You can hate Lifetime movies, and still see that “Liz and Dick” is exactly what a Lifetime movie is supposed to be, instantly hootable, usually ludicrous, rarely dull. Snuggle up.

“Liz and Dick” has two framing devices. It opens with an older Burton, now married to another woman, writing a letter to Taylor from his house in Gstaad in 1984, professing his love for the last time as he lies down to die. (In real life, Burton died of a cerebral hemorrhage likely suffered after a bar fight. But that is a painful, unpleasant detail, and this movie goes in for the merely sloppy ones. The darker side of Burton and Taylor’s alcoholism is glossed over as assiduously as the darker side of their movie collaborations. "Liz and Dick" skims almost all of Liz and Dick's bombs — “Boom!” has thankfully been wiped from history — lingering only on the exceptional “Who’s Afraid of Virginia Woolf?”) The camera then jumps back in time to Taylor and Burton’s first meeting on the set of “Cleopatra,” where Burton makes an impression by deploying a first-class neg, like a true student of The Game: “Has anyone ever told you you’re a very pretty girl?”

The film then swashbuckles through time — for the first half-hour, there is no scene more than 45 seconds, if you are concerned about getting bored — cataloging Liz and Dick’s first meeting, their first shtooping, first infamy, first breakup, first reconciliation and on and on through the 100thiteration of each of these events. Occasionally spliced between these scenes — between the scene where Liz and Dick boink in the trailer, the scene where Dick begins to use “dumpy” as a pet name for Liz, the scene where Liz buys Dick a Van Gogh and hangs it on his hotel room wall all by herself — is the movie’s other framing device, a sort of outside-time trip to “Inside the Actors Studio.” Dressed in all black and at the height of their beauty, Taylor and Burton sit in director's chairs on a blackened stage set talking directly to the camera and each other about the totality and meaning of their relationship like omniscient, flirting, smoking talking heads.

In these Actor’s Studio moments Lohan acquits herself surprisingly well. The destruction Lohan has wreaked on her own voice — it’s the come-hither, smoky growl of an equally jaded, but much older woman — works perfectly here. And with no blocking or costumes or screeching to worry about, she’s almost decent. The same cannot be said of her performance when blocking and costumes and screeching are involved. (And yes, Lohan is made to do Taylor doing "Who's Afraid of Virginia Woolf's" Martha. It’s by miles the most unfair thing Lohan has to do in the whole movie, though you may have to go brush up on Taylor's unreal, expectation-exploding performance as Martha to realize it.)

The legend of Lohan hinges on the fable that she is a wasted talent, a preternatural and skilled child star who made one good grown-up movie — “Mean Girls”— and then squandered her talent on fame. (Say what you will about the hubris of Lohan playing Taylor, but Taylor and Burton knew a thing or a hundred about this particular bargain.) But child actors, especially the kind Lohan was in “The Parent Trap” and her wonderful “Freaky Friday” can get away with a cutesy directness, a workmanlike stagey quality that comes across as phony in adult actors. In child actors, effort can make up for a lack of believability. Trying hard counts when you’re a kid. But Lohan has never been able to quite erase this fakery from her adult performances. Her natural talent does not scan as particularly natural, and she has long since abandoned being a hard worker. In her scenes as Liz, she can flirt and giggle, but she makes a hash of the difficult stuff. She is outmatched in every way by Bowler, who makes for a more convincing Burton — his voice is even pretty nice — than she does a Liz.

Elizabeth Taylor was 29 when she met Richard Burton while shooting “Cleopatra,” and, truly, the most beautiful woman in the world. Lindsay Lohan is all of 26 in “Liz and Dick” and has already had more plastic surgery than Taylor had by the time she was 40. There are some moments in “Liz and Dick” where Lohan is genuinely beautiful (those Actors Studio scenes, namely), but more often she's an occasion to be rehorrified by the plague of plastic surgery, an occasion to say thank you to the universe on behalf of all the movie stars of the past who escaped the scalpel and trout mouth by the luck of their time.

Taylor, notoriously, got there with the plastic surgery by the end of her life, but as with most things, Lohan has lapped her. Lohan’s story is the poor man’s version of Taylor’s, executed with half the talent and twice the speed: Lohan fast-forwarded through the good — the skill, the intelligence, the beauty, the respect — to linger on the bad — the booze, the pills, the fame for fame's sake. These are surely not the synchronicities with Taylor that Lohan was hoping to emphasize, but they are the ones that exist.

Late in the movie, while living with Richard on the boat in the Mediterranean, Elizabeth hires a photographer. Recently, the tabloids have started publishing the least flattering pictures of her they can take — as opposed to the most flattering — and she wants to control her own press. Just about every review of “Liz and Dick” I’ve yet seen has run with the picture of Lohan done up as '80s-era Elizabeth, in the Elvira wig and shoulder pads, an outfit Lohan sports for all of three minutes. Needless to say, it is her least flattering look in the whole film. It's a post-Elizabeth Taylor world, Lindsay Lohan is just living in it.