A top Republican strategist calls conservatives "loons and wackos." Limbaugh is not pleased 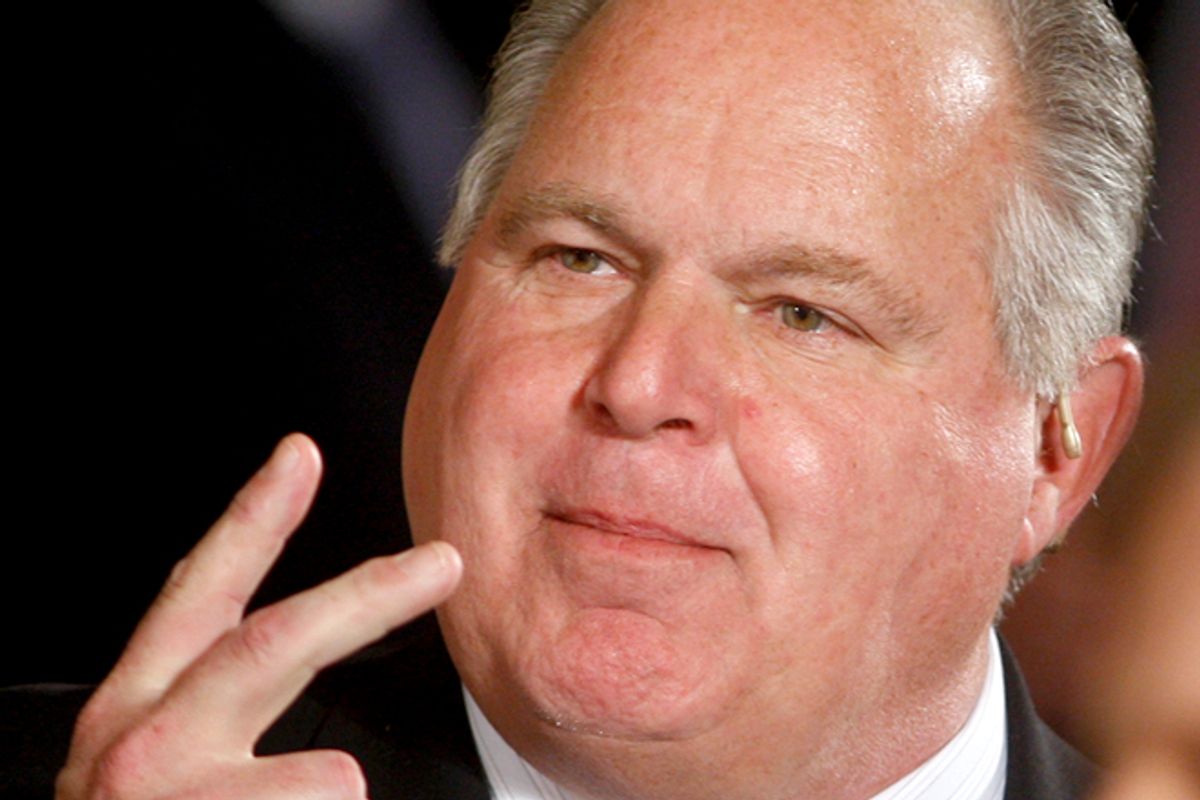 The last time we checked in with the post-election GOP civil war, Herman Cain was threatening to form a new party to compete with the GOP, Bill Kristol sparked a schism over tax increases, and Grover Norquist, the high priest of anti-tax dogma, was losing his grip on congressional Republicans.

This week, the Republican soul searching and polite recriminations via anonymous quote exploded into an all-out war of words between representatives of two wings of the party that have never gotten along, but largely kept quiet for the good of the conservative cause.

In one corner are the consultants, Steve Schmidt, who managed John McCain’s 2008 campaign, and Mike Murphy, who advised Mitt Romney. In the other corner is Rush Limbaugh, the embodiment of the conservative id in human form. We don’t have a dog in this fight as there’s blood on both of their hands, so just sit back and enjoy.

Schmidt threw the first punch in this battle on "Meet the Press" with a left, left combo strike against the right flank of his party. GOP leaders have “succumbed to the base,” he said last Sunday, arguing that “to too many swing voters in the country, when you hear the word 'conservative' now, they think of loons and wackos.” As if that weren’t enough, when host David Gregory played a clip of Limbaugh, Schmidt took the bait. “Our elected leaders are scared to death of the conservative entertainment complex, the shrill and divisive voices that are bombastic and broadcasting out into the homes,” he said in a clear reference to the radio host.

A week later on the same show, Murphy tagged in and continued the pummeling, this time calling out Limbaugh by name. "If we don't modernize conservatism, we can go extinct ... we've got to get kind of a party view of America that's not right out of Rush Limbaugh's dream journal,” Murphy said. He continued to deliver the blows:

“We alienate young voters because of gay marriage, we have a policy problem. We alienate Latinos -- the fastest growing voter group in the country, because of our fetish on so-called amnesty, when we should be for a path to immigration. And we've lost our connection to middle-class economics. We also have an operative class and unfortunately a lot of which is incompetent ... The biggest problem Mitt Romney had was the Republican primary. That's what's driving the Republican brand right now to a disaster."

It’s a rather stunning rebuke from someone who was a top strategist to the Republican Party’s standard bearer just a few weeks ago. And it’s a surprisingly earnest, clear-eyed diagnosis of the party’s problem -- its policy --  from a leader in a party that has spent a lot of time after the election talking about superficial fixes that won’t change much. (That said, it’s more than a little ironic for him to attack an operative class that doesn’t know how to win considering that he ... is an operative who just lost.)

Limbaugh didn’t hesitate to fire back. “What, folks, did I or any of you have to do with the Republican primary? Did not Murphy get the candidate he wanted?” the radio host said Monday. Indeed, Limbaugh is right, at least in that he was never a fan of Romney during the GOP primary.

Limbaugh then went after Schmidt personally, saying, "I don't know where Schmidt has a victory to hang his hat on.”

Yesterday, he also put to bed any rumors that he would support tax increases, as he had hinted at earlier.

Schmidt’s membership card to Limbaugh’s conservative movement was revoked four years ago after McCain’s loss and when Sarah Palin seemed to make it her mission to destroy him. So it’s not particularly surprising that he would tangle with Limbaugh. But the addition of Murphy, and the openness and viciousness of the conflict, illuminates the front lines in the civil war as the party tries to remake itself for future elections.