Yes, the hotel clerk hates you

Traveling this weekend? Be nice as you check in. A veteran hotel worker reveals how mean people get treated 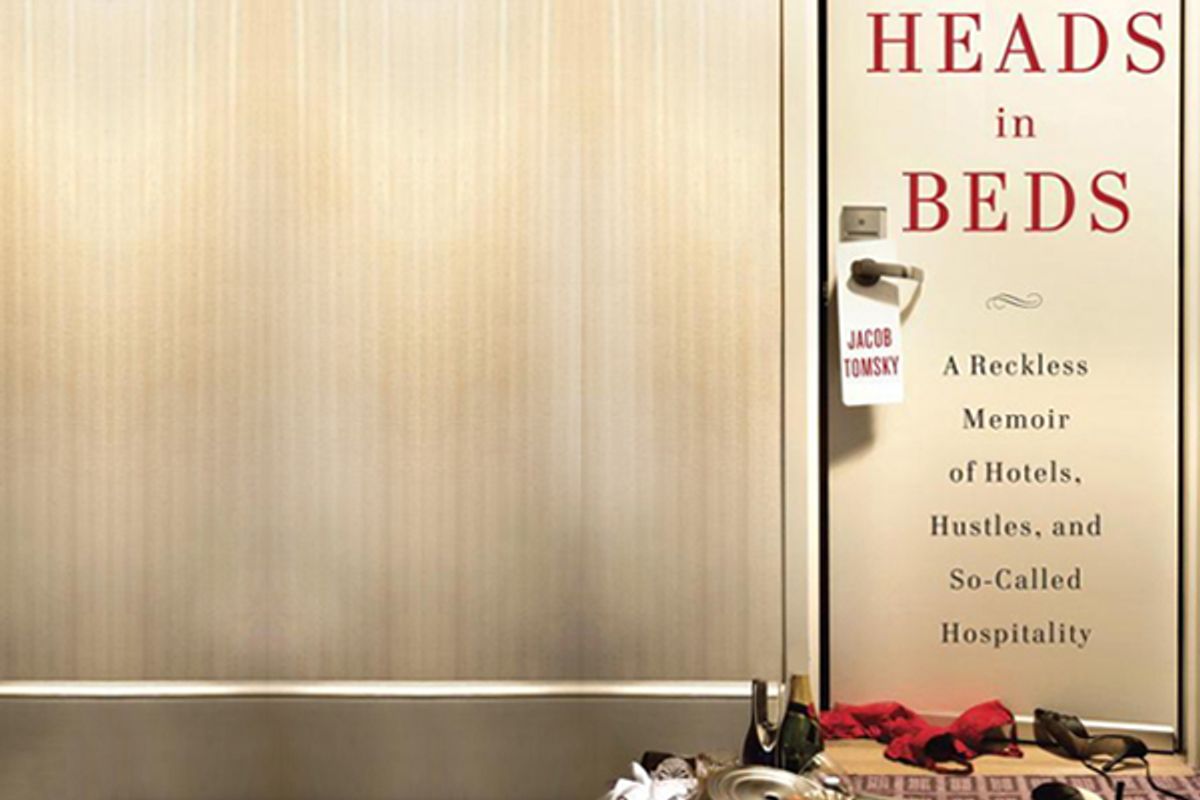 Excerpted from "Heads in Beds: A Reckless Memoir of Hotels, Hustles, and So-Called Hospitality"

“Well then, ma’am, would you like to play a game? How about this. I’ve got a three-digit room number put aside for you. If you can tell me which city’s area code it is, then you get a free bottle of red wine. Sound good?”

“New Orleeens! I love New Orleeens,” she said, pronouncing it incorrectly. “But I never would have gotten it …”

“You love New Orleans? Well then, I’m sending you the wine anyway! Enjoy and welcome to The Bellevue.” I passed the keys to a bellman with a smile. Ben snatched them from me with a disapproving frown.

He came right back down.

“What’s the matter with you, Tom?”

“Clearly. You’d better get a handle on that.”

“I’m refreshed, you know? I got nice and centered down there.”

We both had a nice laugh about that. But it wasn’t long before the job started hacking at my soul, cleaving at my heart, wearing me down again. Not long as in three hours.

A guest was already attacking me:

“You think this is funny? I stay here 10 times a year. That makes me one of your top guests. You’d better get me the room number I was guaranteed right now or you are going to be in serious trouble.”

A couple of things were dead wrong with this businessman’s thinking. First of all, we never guarantee room numbers. The worst mistake an employee can make is to promise a room number. Anything can happen; extensions, flooding from the room above, a murder, someone else paid me twenty for a nice view and I already gave it away.

Second of all, ten times a year does not make anyone a top guest. We’ve got people that clock 200 nights a year. Anal-Block-Stein even has that beat. His two grand in revenue, like a small black mark on the lobby floor, doesn’t mean jack shit to anyone, especially not the GM.

This guest here, Asshole A, apparently was also the type of idiot willing to take it one step further and really point out his ignorance of the situation.

“I will never stay here again, do you realize that? I will take my business to the Plaza. What do you think about that?”

Though I couldn’t say it out loud, here is exactly what I thought about that: “Well, sir, I imagine it would be impossible for me to care less! Please, stay at the Plaza. We don’t want low revenue/high entitlement guests like you pushing your way into our lobby anyway. Plus, do you think I own stock? Think of it this way: Perhaps McDonald's gets your order wrong, maybe they overcooked your fries into little black sticks. Would you attempt to use this logic on the fry cook? Promise to only eat at Burger King? No, you wouldn’t. Because they are just fry cooks. They don’t care about McDonald’s revenue stream, sir. And here, dear guest, I am just a fry cook. Stay anywhere else, it’ll only make me happy not to see you.”

Threatening a front desk agent gets you nowhere. Well, that’s not true. It gets you into a worse room. I have broken blocks, taken rooms from people who even pre-reged into a gorgeous room just because their attitude was off. They never even knew they were originally set to see Central Park in one of the corner rooms with the big bathroom. I took it from them just because they yelled at their wife and manhandled her elbow in a way I didn’t appreciate.

It might not be pretty but it’s important we cover this topic. Because that’s just the beginning of the ways I can and will punish guests. I am a god of instant karma. Instant. No waiting for it to kick in. No four to six weeks for delivery. If a guest makes a racist comment about a cab driver the backlash comes now. If some ignorant guest thinks it’s at all appropriate to make homophobic comments to anyone around me, much less directly to me, I dispense justice: Harsh. Instantaneous. Justice.

Por Ejemplo: Speaking of area codes, one of the most wonderful tools at my disposal is putting a guest into a certain room on the 12th floor. What is so punishing about this room? Nothing by the look of it: A decent room by all accounts. However, if I put you in Room 1212 your phone will not stop ringing with wrong numbers. Why? Well, a surprising number of guests never seem to learn that, from every hotel phone, you have to dial out. In general, to place any call, one must press ‘9’ prior to dialing, local or otherwise. So all day, and believe me, all night, idiots dispersed throughout the building will pick up their phones and try to straight dial a local number, starting with 1 (212). Whatever they press after that matters not because they have already dialed room 1212 and 1212’s guest will constantly pick up the 3:00 a.m. call and hear the loud mashing of other numbers or some drunk guest saying, “Hello? Hello? Who is this?”

“What time is it? Why are you calling me? Who is this?”

“I’d like to order the szechuan chicken please? Excuse me? Is this Happy Family Palace?”

As early as my second year, I invented the ‘key bomb’ and it became instant protocol. A move someone, perhaps a bellman, could request.

“Yo, Tommy,” Trey would say to me, pulling me to the side of the desk, “Key Bomb this dude. He called the cabbie something racist. Something I hopefully never have to hear again.”

When I cut the keys for a bomb, I do it a little differently. Any arriving guest should receive what’s referred to as ‘initial keys,’ which are programmed to reset the door lock when they are first inserted, deactivating all previous keys. Guests seem to think these locks are super computers, connected to the system wirelessly, hence if they check out at the desk and realize they forgot something in the safe they ask me if their keys will still work. I inform them they certainly will. Then again, they point out that I just checked them out. But, man alive, they will still work until they auto-expire at a certain date and time (designated automatically at check-in and set for 3:00 p.m. the day they depart). Not until the keys expire or a new ‘initial key’ enters the lock will their key fail to work.

Therefore, dear guests, if you ever extend, even if the front desk forgets to inform you (which we will), then, YES, you need new keys. (You’re welcome, my front desk people! I just told everyone all at once!)

And NO they do not have your personal information on them, with credit card info, passport number and the age of your children. Who started that rumor I know not. Why the hell would we put personal info on a disposable key card?

But back to the Key Bomb. If I wanted to, I could actually go ahead and never even program your keys, just hand you any old set and send you up to battle that red light over and over before dragging your bags back down to get new keys, keys that I could again refuse to program correctly, though it looks like I did, since I ran them through the programmer but authorized them for the health club only. That might draw heat, though, which is why the Key Bomb is so gorgeous. What I do is cut one single ‘initial’ key then start over and cut a second ‘initial’ key. Either one of them will work when you get to the room. Slide one in; you get green, and as long as you keep using the very first key you slipped in, all will be well. But chances are you’ll pop in the second key at some point and then the first key you used will be considered, as far as the dumb ass lock is concerned, as an old key and invalid. Without a doubt, at some point after that, you will be locked outside your room, jamming your first key into the slot, fighting that damn red light, or maybe the yellow light (whatever the yellow light means I don’t know but it won’t get you in either). And that’s the key bomb. Trace that back to me? Not a chance. Trace that back to the fact you told your 9-year-old daughter to shut her mouth while harshly ripping off her tiny backpack right in front of me at check-in? Never.

I also happen to know the electronic curtains are not functioning in Room 3204 and it gets loads of morning sun in there. Good luck sleeping in.

Recently I called Perry and he related a story told to him by a bellman friend at another property. Among all get-backs there is a king. And this might be it:

“So this ma’fucker has fourteen bags. Takes me three goddamn trips, up and down, up and down. I’m feeling lovely about it, I mean, this dude’s one of the greatest athletes who ever lived, not to mention he’s up in that movie money. Dude is getting paid and here I am poised to pocket some trickle down. So I lay his last bag on the carpet, actually wipe some sweat from my forehead, and this dude gives me a handshake, nothing in it, just a friendly ma’fuckin handshake and a smile. A Walt Disney zip-a-dee-doo-dah smile and I almost lost my shit. He closed the door on me. I’d heard he was famous for being cheap but I didn’t believe it, especially not with the work I put in. So, damn, it’s not like I could miss him coming out of the lobby, and it’s not like I didn’t know he’d be doing his thing live at the Superdome for the next four hours. So I strolled back up to his room, unlocked the door and went into his bathroom. He’d unpacked, laid all his luggage out and I was gonna do a couple laps with his toothbrush in my ass… until it hit me. Boom. I mean, the man has his own cologne, and he actually wears it. So I unscrew the top, pour out a bit of the bottle into the sink and fill it back up. With my own piss. The color was a perfect match. Gave the bottle a little shaky-shake, squirted a few clouds to get it going. And then I walked on out. Felt pretty good about it too when I saw him pimp through the lobby that night on his way to some party, looking sharp and smelling like bellman piss. Professional athletes, my man. They are some cheap-ass ma’fuckers.”

Tread lightly and beware of any employee not wearing a nametag. They are up to something and don’t wish to be identified.

Excerpted from "Heads in Beds: A Reckless Memoir of Hotels, Hustles, and So-Called Hospitality" by Jacob Tomsky Copyright © 2010 by Jacob Tomsky. Excerpted by permission of Doubleday, a division of Random House, Inc. All rights reserved. No part of this excerpt may be reproduced or reprinted without permission in writing from the publisher.