How to stop GOP obstructionism

The Senate doesn't have to be as partisan as the House. There's an easy way to fix it, and the GOP might even agree 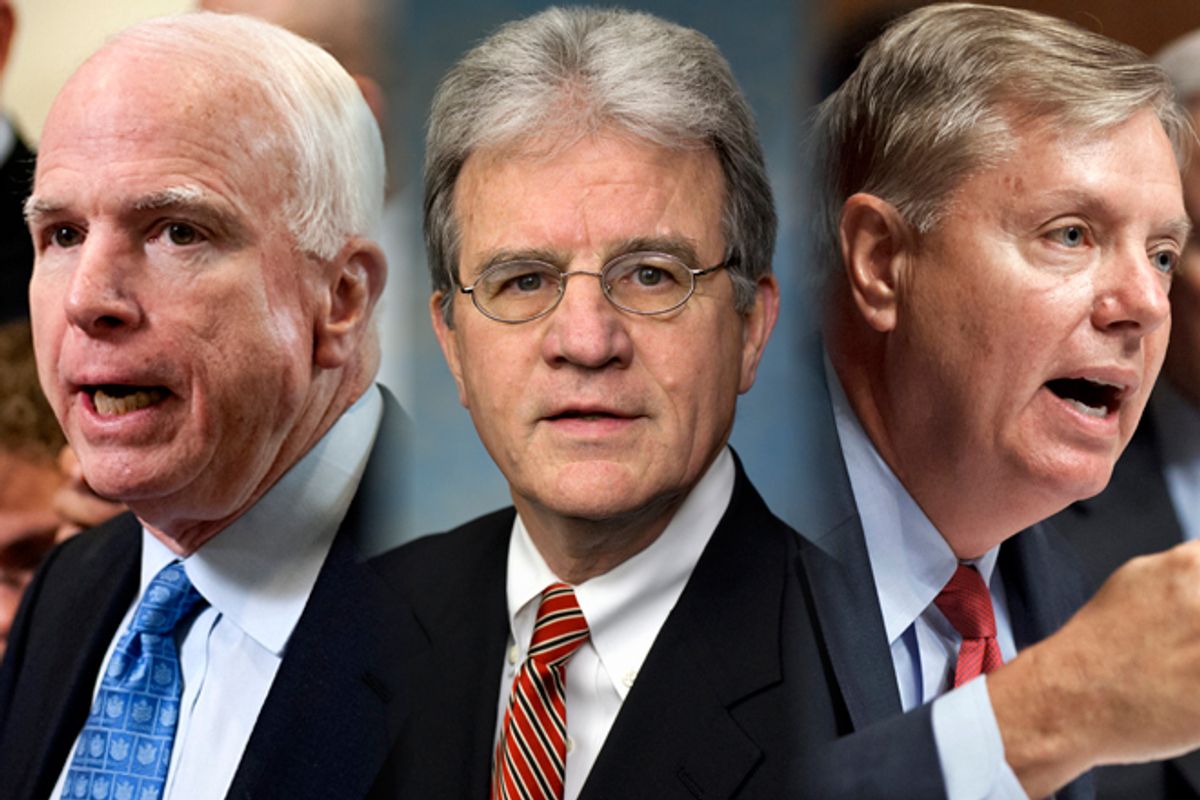 We don’t know yet exactly what filibuster reforms Harry Reid and the Democrats will push through in January. But the highest priority should be to fix the executive branch nomination process. It’s the one place where the Senate could probably agree to a workable solution. And it’s important.

Perhaps the most unappreciated aspect of Senate reform is that it’s hard to get right. Like it or not, the Senate doesn’t want to become a second House of Representatives, running on strict majority party rule. Individual senators want to be able to defend their interests, and they want a legislative process that allows them to do so.

That logic doesn’t really apply to nominations in general. Nor does the logic of caution that leads to a reluctance to commit to majority rule on judicial nominations apply to executive branch picks. Again, agree with them or disagree, most senators (and both parties) are reluctant to allow a president and a slim majority of the Senate to pack the courts with lifetime appointments of whomever they want.

So reforming the filibuster with respect to both legislation and judicial nominations is going to be difficult even for senators who agree that something has gone badly wrong over the last several years in that chamber. The challenge, in a lot of ways, is to find rules that would revive the norms that used to dominate the Senate in the 1960s and 1970s — and making them work in an era in which senators regularly exploit any opportunity the formal rules give them.

For executive branch nominations, however, the job should be easier.

That’s because almost everyone believes, even in this partisan era, that presidents should basically be able to choose the people who stock the various departments and agencies of the executive branch. That suggests majority, not supermajority, approval of these nominations.

Indeed: Until very recently, almost all executive branch confirmations were boring and routine. Every once in a while something would cause controversy — otherwise the novel (1959) and movie (1962) "Advise and Consent," centering on a fight to confirm a nominee for secretary of state, wouldn’t have been written. And toward the end of a presidency, the Senate would typically drag its feet on nominations. But almost everyone else was fairly easily confirmed. That began to change when Democrats defeated George H.W. Bush’s nominee for secretary of defense, John Tower, in 1989. But even then a filibuster was not used — nor was a filibuster used when Democrats failed to defeat attorney general nominee John Ashcroft in 2001.

There’s no easy fix to the escalating battle over these nominees. But they certainly can be less harmless if it takes a simple majority to confirm.

Even minority party members have good reason to support a reform that would keep the Senate tradition of unlimited debate except with a cloture vote — but with cloture requiring only a simple majority vote instead of 60 — because it would allow the Senate to retain what has been the key part of the executive branch nomination process: the opportunity for individual senators to influence what the agencies and departments do. They can do that by raising key issues to nominees and even by extracting specific commitments — often by using the threat of delaying confirmation.

The Senate should retain the ability of individual senators or small groups of senators to do that, as long as the majority leader believes those senators are in fact bargaining over a specific point related to, typically, a home-state interest. And senators should be willing to give up the supermajority requirement for confirmation as long as they retain that individual influence.

Indeed: The brutal truth about most of these confirmation battles is that the out party rarely cares if it wins or loses. John Ashcroft wasn’t going to pursue significantly different policies than whoever would have been nominated to replace him; the same goes for GOP targets during the Obama years such as Cass Sunstein. The reality? Most of these fights are just ammunition for the outrage industry: Partisan groups are raising money and getting ratings from these fights, and that will work just as well whether they win or lose.

Granted, there is one set of filibustered nominations that are being blocked for policy reasons. In a few cases, Republicans during the Obama presidency have chosen to roadblock any possible nominee for some positions in an effort to keep agencies from functioning properly (or at all). Majority confirmation of nominees would make that strategy — what Thomas Mann and Norman Ornstein call “nullification” — a lot harder. But then again, it’s a pretty hard maneuver to defend on constitutional grounds, and at any rate presidents can defeat it by using recess appointments.

Which gets to the real reason why minority party senators should be willing to go along with a shift to simple majority cloture on executive branch nominations. If they don’t do it, the eventual outcome could be much worse for them. Whether it’s the increased use of recess appointments or a renewed push to make fewer presidential appointments through the Senate confirmation process, there are a lot of fixes out there that are an awful lot worse for Senate minorities than returning to majority confirmation. Again, that’s not true for legislation or judicial nominations, and I’d expect Republicans to fight hard against curbing the filibuster in those areas — and for majority Democrats to tread cautiously.

But on executive branch nominations, there’s an easy, workable deal that should be available. Simply keep everything the same (as far as floor procedures are concerned) and bring the number for cloture down from 60 to a simple majority. C’mon Harry Reid: Let’s get this part of it done.