The strange case of Alfred Hitchcock

Why watch this tepid, Oprah-esque drama about Hitchcock's messed-up marriage when you can see his movies instead? 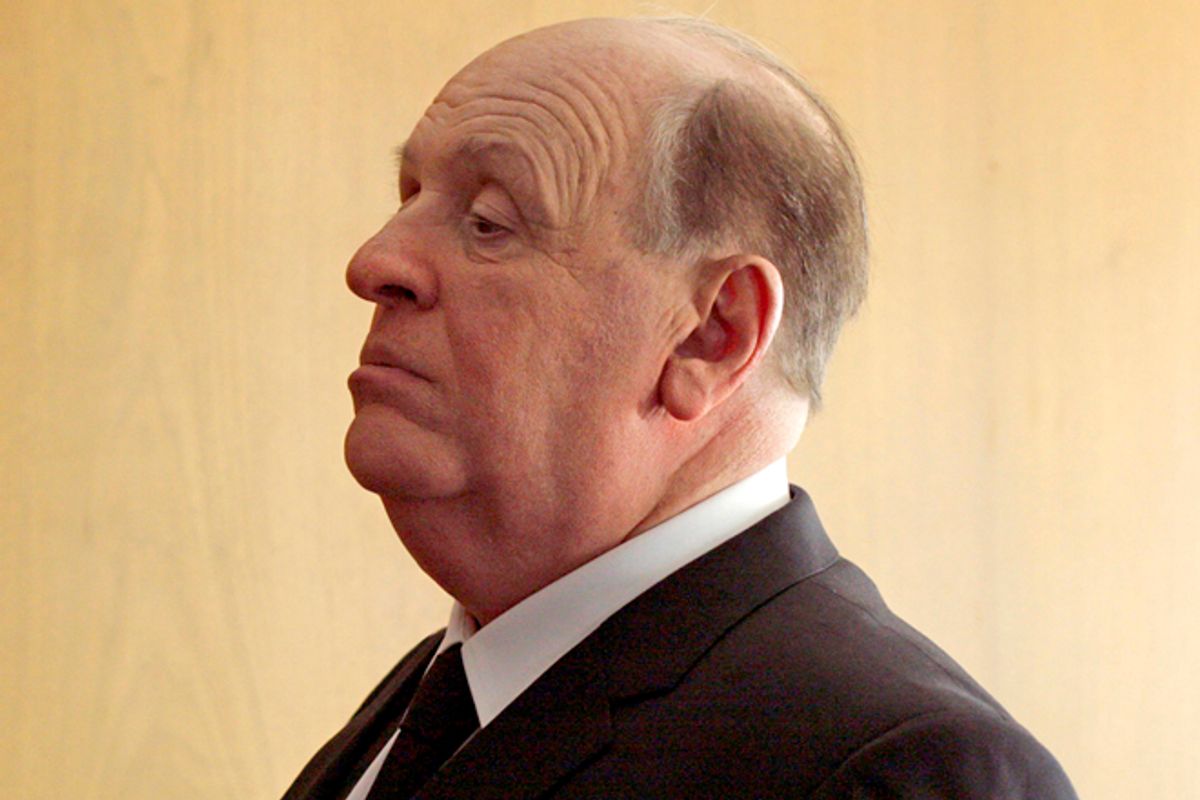 “Hitchcock” is less a bad film than a middling, minor one, but it fails the standard I once heard applied to books about Proust: They have to be good enough that you wouldn’t be better off reading Proust instead. The contrast, in this case, is ridiculous. On one side, you’ve got a tepid inside-Hollywood comedy, featuring a pretty good Helen Mirren performance, Anthony Hopkins lumbering around in a fat suit, some late-‘50s Los Angeles atmosphere and a few intriguing tidbits of movie history. On the other side, you’ve got “Rebecca” and “Strangers on a Train” and “North by Northwest” and “Vertigo” and countless other pictures we could name, without even getting to “Psycho,” the groundbreaking horror film that serves as background to the domestic plot of “Hitchcock.” It’s not close.

In fact, I genuinely can’t figure out why “Hitchcock” was made or who its target audience might be, except that it gratifies our apparently universal appetite to believe that creative geniuses are hateful freaks. Hitchcock fans will learn next to nothing about his work from this film; we don’t see a single frame of “Psycho” or any other Hitchcock film, no doubt for copyright reasons. And I can’t believe that the gossipy, half-baked material found herein about Hitchcock’s troubled marriage and his lecherous interest in his blonde leading ladies is salacious enough to interest a 21st-century audience who’ve barely heard of the guy. Indeed, compared to the predatory and vengeful monster recalled by Tippi Hedren — whose struggles with Hitchcock on the sets of “The Birds” and “Marnie” form the basis for the recent HBO movie “The Girl” – the obese but harmless perv played by Hopkins in “Hitchcock” is Little Mary Sunshine.

There is a low-key feminist reinterpretation at the heart of “Hitchcock” that’s at least somewhat interesting, that being the notion that Hitchcock’s long-suffering wife, editor and screenwriter Alma Reville (played by Mirren), should be viewed as an uncredited collaborator, clearly on “Psycho” but also on many other of his films. This may not be widely known, but I don’t think it’s even remotely controversial, and Hitchcock said as much himself. Furthermore, there’s a story like Reville’s – the wife or girlfriend who sublimates her own talent to her male partner’s success – behind at least half of history’s Great Men, whether we’re talking about film or art or politics or some other field. You could argue that screenwriter Tony Kushner’s portrait of Mary Todd Lincoln in “Lincoln” makes much the same point, but set in a richer dramatic context and delivering a vastly higher payoff.

I’m not defending Hitchcock from the charge that he was a screwed-up and unhappy fellow who had massive problems with women and had to be propped up, in his life and work, by a woman he repeatedly betrayed. All of that is either inarguably correct or highly plausible. Far more to the point, it’s all in his movies, and illustrated so much more vividly than in this Oprah-esque fable of a failing marriage cured by a nearly failed horror movie. “Hitchcock” director Sacha Gervasi and screenwriter John J. McLaughlin (adapting journalist Stephen Rebello’s book about the making of “Psycho”) spin their episodic tale gamely enough, but they can shed no light on why Hitchcock’s movies remains so powerful, addictive and influential while their own movie will rapidly be forgotten.

As a critic, I have often expressed my objections to Hitchcock’s aesthetics, and the reasons why I think he’s been a baleful influence in film history. There’s the foregrounding of style over substance (or the identification of style with substance), the fetishistic and misogynistic treatment of women, the cynical or faux-cynical belief that art is a kind of practical joke and the audience its victims; in a phrase, the essentially manipulative and sadomasochistic character of Hitchcock’s work. But I’m not blind to the fact that this guy was a cinematic craftsman with few or no peers, who constructed a visual language for suspense — and suspended desire — that dominates the media landscape to this day.

And I won’t pretend that I don’t enjoy watching Hitchcock’s movies, even if I don’t necessarily respect myself the next morning. Or that I don’t understand that Hitchcock's particular blend of manipulation and sadomasochism has a wide resonance, that his combination of stylish shimmer, narrative momentum and perhaps illusory psychological depth grabs people on a profound unconscious level. For all of Hitchcock’s protestations that his work mustn’t be taken seriously – “Some films are slices of life, mine are slices of cake” – he belongs on the list of directors who make you dream, in David Lynch’s famous phrase.

It’s clearly relevant to Hitchcock’s films that he was a neurotic mess (and quite likely a highly unpleasant and unhappy person) who had unresolved mommy issues and lusted fruitlessly after a parade of icy blondes. But those things don’t explain his seductive, paranoid, mistaken-identity dreamscapes any more than Scott Fitzgerald’s alcoholism and bigotry can explain “The Great Gatsby,” or Richard Wagner’s anti-Semitism can explain “The Ring of the Nibelungen.” Indeed, as Richard Brody of the New Yorker recently suggested in a post about Hedren and “Marnie” (a movie I pretty much can’t stand), the fact that Hitchcock was a defective personality may make his artistic achievement greater rather than lesser.

But don’t let me leave you with the impression that “Hitchcock,” built around a muddled and depressing late-career Anthony Hopkins performance that I don’t want to describe in any detail, actually has an argument to make about its title character. He’s a figure vastly more pathetic than Norman Bates, a waddling near-cuckold who is locked in a passionless and bickering marriage and visited in awkward moments by the ghost of mass murderer Ed Gein (seriously!). He has apparently made some movies – good or bad? No clue! — and eventually wins his wife back by promising to make another one, where they put on old-lady clothes and slash a girl in the shower.