On the trail of champion virtual hunters 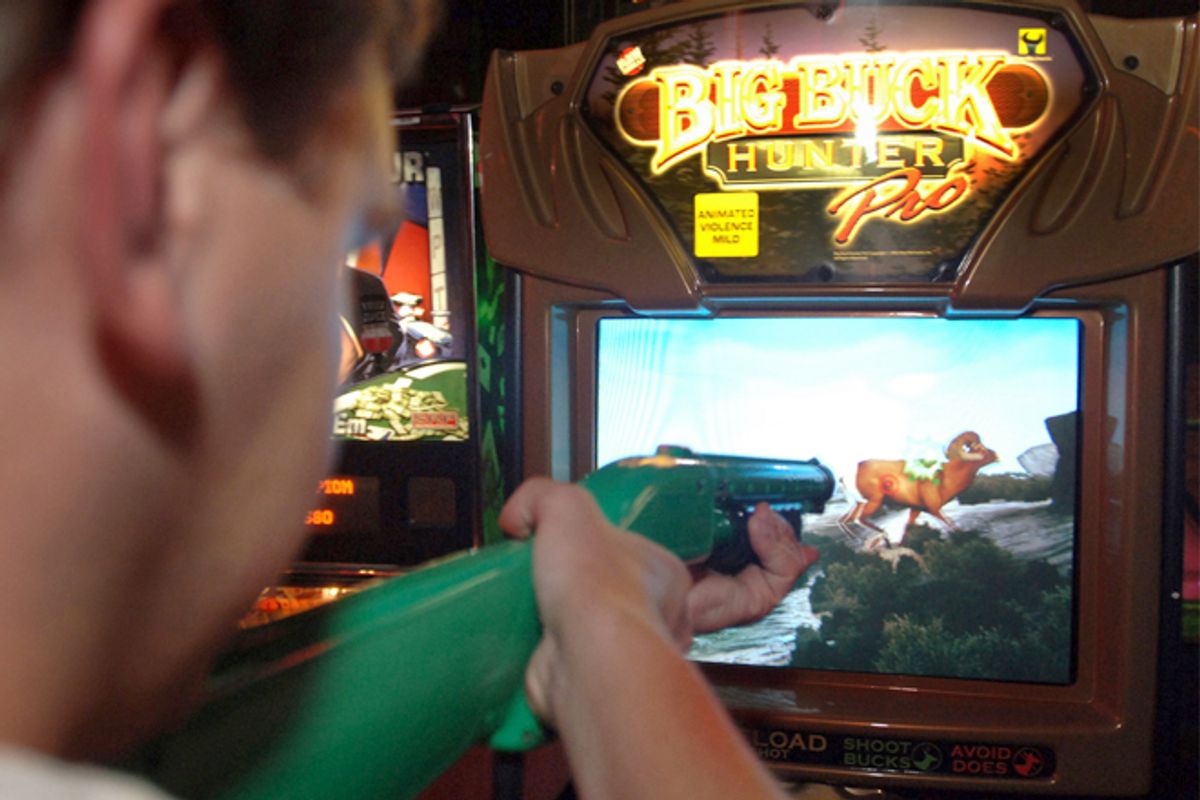 If you’ve visited a bar in the last decade, you’ve seen men, and the women who humor them, shooting pixelated deer with plastic shotguns. They’re playing "Big Buck Hunter," a video game franchise that has thrived because millions of Americans who have no interest in hanging out in the woods at 4 a.m. or filleting smelly carcasses will happily spend Friday nights getting blitzed and killing Blitzen.

One summer night at Good Co., a bar in the hipster-nexus of Williamsburg, Brooklyn, punk standards ruled the stereo and the bartender’s mustache curled up at the ends, as if it was 1870. On the patio, grown men played beanbag toss, and inside Alex DerHohannesian, 32, and Andy Lin, 34, trained for the "Big Buck Hunter" world championships.

They took turns shouldering a weapon and firing into the newest version of the game, "Big Buck HD," which renders vast wilderness landscapes like mountain ranges and prairies in almost disorienting depth, as if the flat-screen monitor was a hatch in a low-flying helicopter. After each volley they pumped the guns rapidly with a loud, springy clack. Between screens, when a player has a moment to reach for his beer, “Big Buck Girls,” in skimpy hunting gear, materialize on-screen and wiggle for the players' amusement.

DerHohannesian, a good-natured, bearded Kentuckian, works on the music side of advertising. Lin is a photographer. With his shoulder-length black hair and taste for V-neck shirts, he could be the cover model for a Harlequin novel about East Asian pirates. Neither fits the durable stereotype of video game fanatics as pasty, basement-dwelling gnomes. DerHohannesian used to play competitive hockey and Lin has a background in martial arts. But each has cultivated his physical gifts with countless hours and dollars spent — not to say pissed away — on virtual hunting.

DerHohannesian said he once “shot a squirrel for pioneer day in eighth grade,” before cooking and eating it, but neither friend claims any substantial expertise with real guns. In 2010, DerHohannesian won the world championship in the "Big Buck Safari" version of the game, which is set in Africa. Lin had finished fifth and was still hunting for his first title.

The first "Big Buck Hunter" came out in 2001, designed by a company called Play Mechanix (now a subsidiary of Illinois-based Raw Thrills), and the company has released several new editions since. There are now more than 40,000 "Big Buck Hunter" machines in bars and arcades across the U.S. Like pool or darts it can be played alone, for money or as the centerpiece of a friends’ night out. The amount of money that "Big Buck" machines take in is best left uncontemplated.

I’m a decent fake rifleman, but to paraphrase Nabokov, who would have loved "Big Buck Hunter," I can’t stand in the shadow of a master’s shadow. Lin and DerHohannesian both possess superb virtual marksmanship, but that is the departure point for their genius. Like football coaches, they study the patterns the bucks follow and claim to understand how the computer shuffles those patterns.  (I struggled to follow their explanation of this dark art.) They have even discussed how the situation might change in different time zones.

Despite their prowess, Lin and DerHohannesian held an abiding respect for their competition. The upper Midwest is "Big Buck Hunter’s" spiritual heartland; Minnesota sports bars are to the game what Rio's favelas are to soccer. The “Minnesota boys are hunters, probably Republicans,” Lin once told me between fusillades. He named a few top competitors. “They’re young. They’ve got something to prove,” he said. “They probably don’t have day jobs.”

This year’s tournament took place on the new HD machines, forcing elite players to recalibrate their muscle memory for the slightly heftier guns and acclimate to the denser, more layered scenes, packed with birds, rodents and other critters that can boost scores but also distract from the all important bucks. With a few weeks to go, the boys from Brooklyn were poised to make another run at the championship. “I’ve been playing shitloads,” DerHohannesian said.

The day before the tournament, I emailed him about final preparations. The response came immediately, “Everything's groovy. Training's been awesome. Ready to bring the pain.”

On a recent Friday night, chandeliers constructed from fake antlers hung from the ceiling of the Manhattan loft space and fake game trophies adorned the walls. A few birch logs, authenticity unconfirmed, lay on the floor and a replica of a moonshiner’s porch stood between throbbing speakers. The DJ mixed classic cock rock with raucous hip-hop and techno. Men in coveralls and trucker hats and women in tight T-shirts and puffy vests filled out the rustic urban vibe. I spotted several beer funnels. Live Big Buck Girls mingled in very short camouflage skirts.

The Big Buck ladies tournament was established to overcome an obstacle to the game's future growth: “The 'Buck Hunter' demographic is overwhelmingly male,” as a P.R. representative put it. Returning champion Sara Erlandson, who owns a bar with her husband in Beldenville, Wis., topped the ladies’ field, taking home $5,000 and a trophy of two moonshiner jugs posed mammarily on a base. “Jugs of Destiny,” it said in red script. "Big Buck Hunter" is organized in groups of five screens known as “treks.” When a trek begins, players pick a species — elk, moose, deer, etc. — and then travel through a series of wilderness screens. On each screen the goal is to kill the three male bucks, distinguished by their antlers or horns, as they run and juke and graze, while sparing the bareheaded female does, which bound into the line of fire. Hitting one of them ends the screen. Each trek, which might cost $1 and last four minutes, concludes in a bonus round where players target whimsical scenes like frogs hopping on lily pads or the jugs in a moonshiner’s shack.

The 64-competitor world championship began the next afternoon. In head to head play, six bucks present themselves for slaughter on each screen and the competitors fire simultaneously. If one hits a doe, he steps aside to watch his opponent rack up points. With each match lasting only one trek, killing one doe can be an insurmountable setback.

As DerHohannesian and Lin warmed up, I spoke to some of their competition.

“You gotta find the right buzz,” Steven Naumann, a 26-year-old high school teacher said, evangelizing for the other school of thought. For Naumann, the right buzz is two beers and a shot of Crown Royal. He plays "Buck Hunter" at CJ Mahoney’s in Troy, Mich., and had driven to New York in an R.V. packed with tourney competitors and supporters. They all wore bright orange T-shirts, which Naumann accented with a black-and-white camo bandanna tied Rambo-style around his forehead.

Naumann, who placed second last year, was the only Big Buck Hunter I met who said he also hunts live deer, though he admitted it didn’t do much for his "Big Buck" game. He described himself as part of the “redneck, but not in a bad way, hunting crowd.”  “We get here and all of a sudden we’re local celebrities,” he said, Exhibit A being the guy with the pad sitting next to him.

Last year’s champion, Nick Robbins, who plays in Minnesota, did his grand entrance to the menacing strains of “Iron Man,” his golden jug trophy aloft, and we were underway. The music stayed loud and the crowd got drunker, a plausible simulation of barroom conditions.

The beer sponsor was Old Milwaukee, in case you were wondering.

In the first round, DerHohannesian easily knocked over some palooka and Lin also played sharp, besting two-time champion Jerad Berg. The pair then had the bad luck to face off in Round 2; DerHohannesian won, sending Lin to the “reload” bracket, and its longer road to the final.

Blame the HD machines, or the flashier, louder New York venue — previous championships were in Chicago — or a new generation of talent, but many veteran players fared poorly. Berg and his brother Nick, another former champion, won a combined total of one match. Clay Conrad, who’d had the highest qualifying score, couldn’t gain any traction. Garritty, the Australian, went one and two for all his trouble. Lin lost his next match to place  36th. DerHohannesian didn’t rate much better, losing two of his next three matches.

What happened out there? “The women are killing it,” Lin said. Just like in the election four days earlier, female out-performance was a big story. Only six of the 64 players were women, but three finished in the top 12.

Sara Erlandson, who’d won the ladies’ tournament, was very much in the championship mix, wearing  a coonskin cap and a camouflage T-shirt with the outline of Wisconsin and the legend  “Best state ever.” In the main draw she lost to the defending champion before recovering to finish fourth and pick up another $2,000.

I’d been watching "Big Buck" for much of the last two days and as the matches dragged on I found myself more entertained  by the tweets projected on a giant screen:

That captures the tone nicely, though some of the tweets were merely crass. I stayed long enough to see the defending champion unseated by another guy from Minnesota, an established player named Chris Fream, and listen to the ritual blare of “We Are the Champions,” the spraying of confetti. Fream accepted the oversize check for $15,000 and urged everyone on to the next bar.