Should churches be used as polling spots? 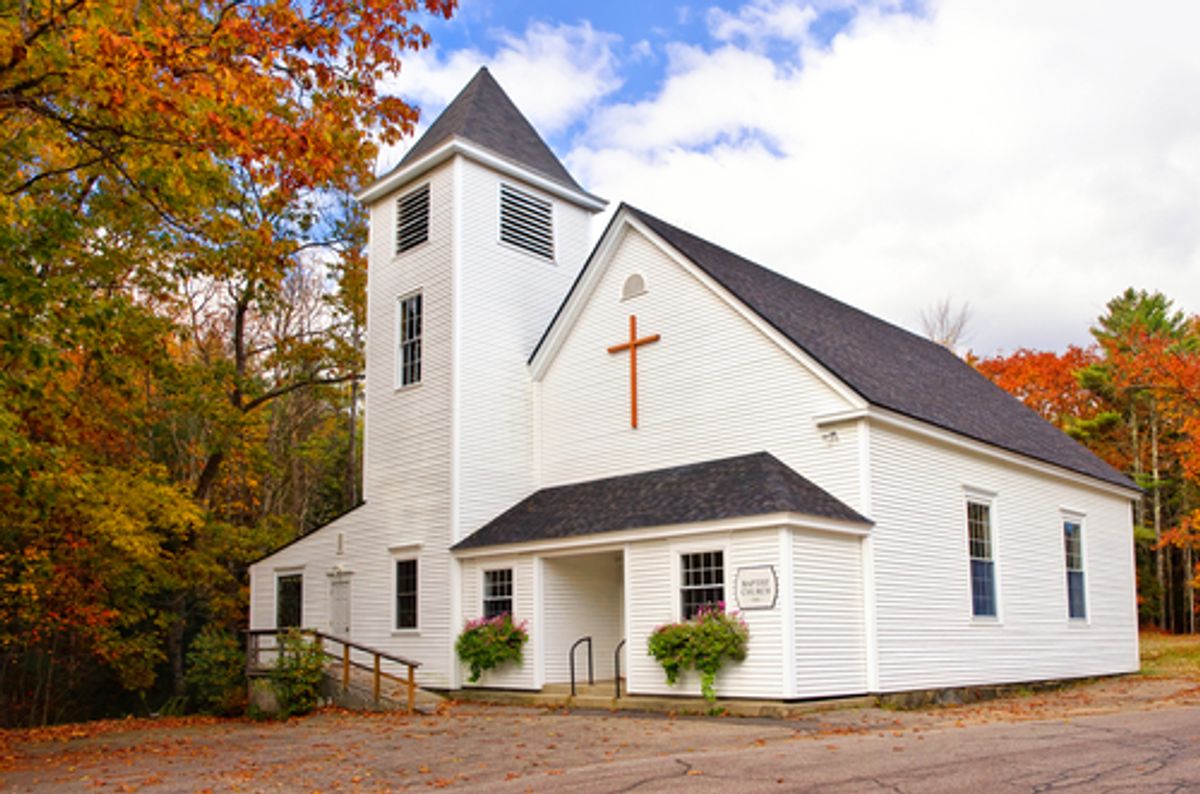 In South Saint Paul, Minn., on Election Day, residents showed up at St. John Vianney Catholic Church to vote and were greeted with a banner outside the polling place entrance that read, “Strengthen Marriage, Don’t Redefine It.”

Minnesota was voting on a constitutional amendment to ban same-sex marriage, and the Catholic Church had been the most vocal proponent of the ballot measure.

Ivan Kowalenko took one of those photos. He told Minnesota Public Radio, “I was shocked, I didn’t think that would be allowed. I was hearing that you’re not allowed to wear any political slogan of your own, so it doesn’t seem entirely appropriate that a voting venue would be allowed to express an opinion.”

At a separate polling place at St. Joseph’s Church in West St. Paul, Stephanie Weiss was waiting in line to vote, and she noticed a sign posted to the wall. It was a prayer, written by Twin Cities Archbishop John Nienstedt, that urged Catholics to defend God’s plan for marriage — between one man and one woman.

She took a picture of the sign, which was shared on Facebook among many opponents of the amendment.

“I thought, this is why you can’t campaign within 100 feet. This is how you disenfranchise people, right here,” she told The Star Tribune. “If it isn’t campaign material, it was still a really insightful experience for me, but I’m shaking.”

In Minnesota, campaign materials must be 100 feet or more away from a building that is serving as a polling place. In both instances, the state statute was violated.

The Archdiocese of St. Paul and Minneapolis called the incidents an oversight, and the signs came down by midday on Election Day.

What happened in Minnesota is a familiar story to voters in North Carolina. That state voted in favor of a constitutional amendment in May that banned same-sex marriage and civil unions. Several churches that were serving as polling places posted signs in support of that amendment.

Open Door Baptist Church in Morehead City put the words “Vote for Marriage” on its marquee the day of the primary election, according to the Carteret County News-Times. Earlier this month, the church doubled down on its politicking with a sign that read, “Vote for life and marriage.”

In Wilmington, North Carolina, Devon Park United Methodist Church put up the words “A true marriage is male and female and God” during the May vote on the constitutional amendment. That church was serving as a polling place.

The church’s pastor, William H. Pearsall Sr., told the Wilmington Star-News that it was his idea and that his church council agreed to put the message up. “We agreed that we needed to stand up for Christian values,” Pearsall said. He also told the paper, “In our church, God’s word never changes and it’s the truth.”

In all three instances in North Carolina, the signs were outside of the buffer zone set by state statute and were, therefore, legal. However, the incidents prompted a call by some residents and advocacy groups to revamp the selection process for polling places.

In a letter to the North Carolina State Board of Elections (PDF), the American Humanist Association asked the state to consider choosing only public buildings as polling places in light of the politicking that occurred on church property.

The group warned that the current system “permits county elections boards to choose as polling places partisan, politically-involved institutions such as churches.”

In North Carolina, the Christian church was a huge backer of the constitutional amendment, and many churches who had taken a public stand in support of the amendment were also serving as polling places.

“While churches of course have the right to speak about their views, the fact that they do so makes church properties themselves unsuitable for use by the public at large as a place to engage in their most fundamental of democratic activities,” the American Humanist Association wrote.

Opposition to marriage equality isn’t the only issue churches that served as polling places delved into this Election Day.

Several Catholic churches across the country had similar anti-abortion displays greeting voters when they arrived at the polls.

Sacred Heart of Mary Catholic Church in Boulder, Colo., prompted complaints from voters over an anti-abortion display. Above a field of tiny white crosses was a sign that read, “3,300 Abortions Daily in the USA.”

Elections officials told the Boulder Daily Camera that initially church representatives said they would take the display down before the elections but later called back to say, “Father has elected to keep it up.”

The display was outside the 100-foot buffer zone required by Colorado law, but even if the display was legal, Boulder County officials have decided to no longer use the church as a polling place, according to the Daily Camera.

And the ACLU has gotten involved. In a letter to county elections officials, the Boulder County chapter said the display could be construed as voter intimidation.

“The Church had the First Amendment right to maintain this provocative and, to some, intimidating anti-abortion display on their property,” said the letter, obtained by the Daily Camera. “But the fundamental constitutional and statutory right to vote must prevail in this case on the property of a polling place selected by the County.”

In St. Louis, Missouri, the Assumption Parish Rectory, a Catholic institution, also had a field of tiny crosses with a sign near the entrance to the polls that read, “Life: God’s Choice.”

Resident Lynn Byrd contacted the Eureka-Wildwood Patch after taking pictures of the display.

“I find this offensive, and believe it to be inappropriate behavior,” he told the Patch. “I just do not believe this is appropriate for a polling place. Maybe we just need a different polling place if the church insists on such behavior.”

Reverend Patrick J. Driscoll, associate pastor defended the display in an email to TAI: “So that you know, that sign is up all year long. Life is precious and God’s gift.”

And one voter in Cincinnati, Ohio, told the Cincinnati Enquirer about a field of tiny crosses and anti-abortion messaging at St. Jude Church, which was serving as a polling place.

“It was reprehensible for St. Jude to take advantage of their location to promote their political agenda,” said James Umlauf. “Perhaps it’s time to move the polling places to neutral ground.”

St. Jude Church did not respond to a request for comment about the display.

In some polling locations, churches combined the anti-gay and anti-abortion messaging.

According to the Athens News, in Vincent, Ohio, the county elections board was looking into complaints on Election Day about a sign at Lighthouse Baptist Church reading, “Vote Life, Vote Family, Vote the Bible!” a reference to the church’s stance against abortion and gay marriage. It was unclear from press reports whether the sign was outside the 100-foot buffer required by Ohio law and the church did not respond to TAI’s request for more information.

Other reports showed pictures of voter guides within feet of polling booths.

In Virginia, a voter voting at an Assemblies of God church noticed voter guides created by the Family Research Council, Focus on the Family and the Family Foundation about 20 feet from the polling booths. A voter sent Raw Story a video from that polling place.

Pastor Bernie Newcomb told The American Independent that the church did not sanction the voter guides and wasn’t sure how they got placed on a table so close to the voting booths. He said he first heard about the guides on Wednesday morning following the election.

He said a church employee read the report by Raw Story and was upset. Newcombe said the church alerted election authorities on the morning after the election.

However, Newcomb said he viewed the voter guides the day after the election. “I think they are totally fair,” he said. “They cover a wide range of issues and seem non-partisan.”

Those voter guides (PDF) rated President Obama and Republican candidate Mitt Romney on issues such as “taxpayer funding for abortion” and “open homosexuality in the military.”

The Rev. Barry Lynn, executive director of Americans United for the Separation of Church and State, penned an opinion piece for CNN on Election Day.

He noted that part of the problem with voting in churches is that, in many cases, the church has staked out a position on issues that are on the ballot.

“Many churches and other houses of worship have taken stands on these issues and lots of others, which is their prerogative,” he wrote. “Although federal law prohibits churches from endorsing or opposing candidates, they have the right to speak out on ballot referenda and on other issues, from abortion to zoning.”

He added, “All of this church-based political activity makes me uneasy about casting ballots in houses of worship, especially those festooned with political signs.”

But does that mean churches should not be used as polling places?

Rob Boston of Americans United told The American Independent that his group thinks they shouldn’t unless absolutely necessary.

“Many people are uncomfortable discharging a civic duty in a house of worship that might be known for taking political stands,” he said.

“In some communities, officials argue that they lack options because there aren’t enough schools, libraries and community centers,” said Boston. “Increasing voter turnout is a widely shared goal, and I understand the desire to add more polling places. Americans United recommends the use of other types of facilities, even commercial space, before churches are used.”

When churches are used, Boston added, there should be sufficient oversight.

“If it’s absolutely necessary to use churches, election officials should make it abundantly clear that they won’t get special treatment,” he said. “The space where the voting occurs should be neutral, and if the law requires that polling sites be free of all political material — as most jurisdiction do — then the churches might have to remove certain items while voting is taking place.”

He added, “If pastors don’t want to do this, then their church should not be used as a polling place.”

Churches weren’t the only places where political signs were inappropriately close the the polling booths. In several schools in Florida, Philadelphia, and Washington, DC., images of President Obama were near polling booths, according to the conservative website Townhall.

In Philadelphia, a court order forced the partial covering of a mural depicting President Obama at an elementary school. The mural was painted several years ago, according to a local CBS affiliate.