The singer goes on a vile rampage against a female critic, and his fans pile on the misogyny 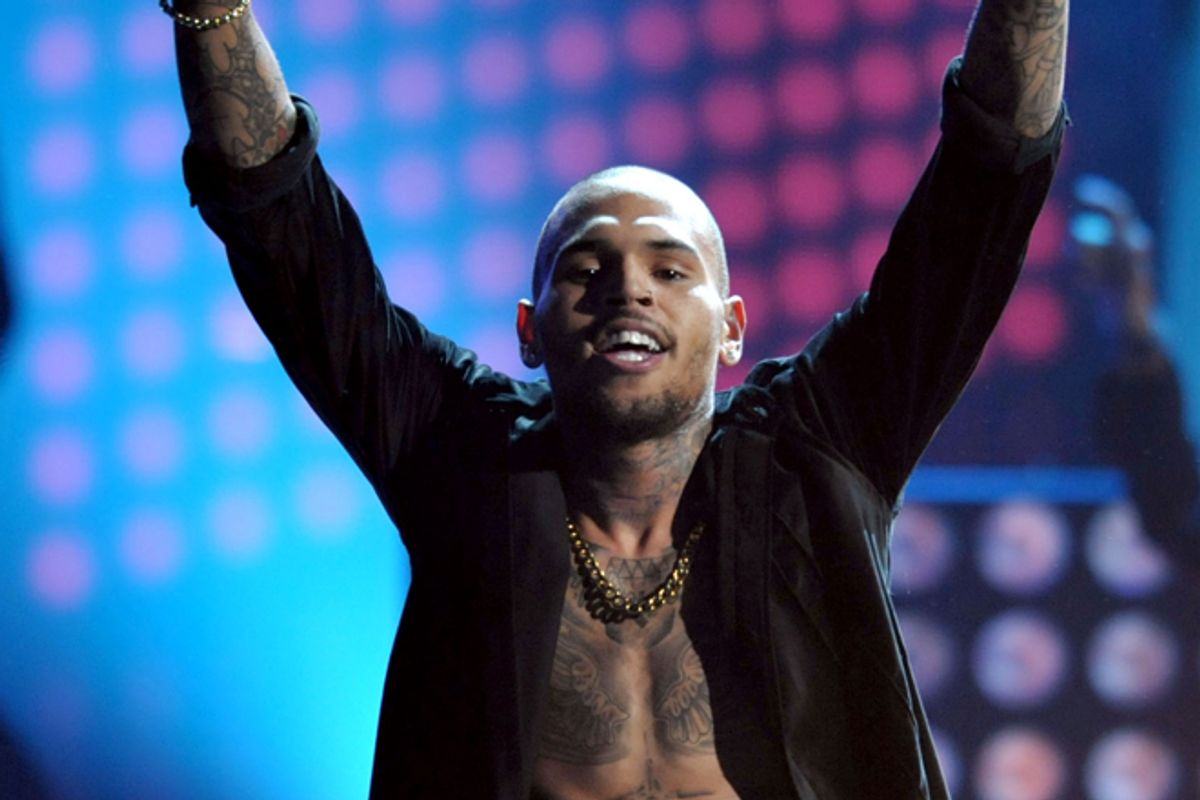 Who's more stomach-turning: Chris Brown or his army of Twitter trolls? You know what? Don't answer that. Let's just call this one a draw.

It's been almost four years since Brown's notorious violent altercation with his then-girlfriend Rihanna and subsequent assault conviction. That's a long time, especially when you consider that Rihanna herself has made it more than clear she's back on friendly terms with him. But to those fans and supporters who say it's time to move on and put his abusive past behind him, allow us to illuminate why Brown keeps making that a tall order. There was the "Good Morning America" tantrum. There was the nightclub brawl with Drake.  And then there's what happened Sunday night on Twitter.

It started when Brown jokingly posted a photo of himself with the comment, "I look old as fuck! I'm only 23." Comedy writer Jenny Johnson promptly lobbed back, "I know! Being a worthless piece of shit can really age a person." Was Johnson's comment compassionate, mature or even necessary? Nope. But was it an easy-to-ignore jibe from the virtual peanut gallery? Absolutely. Yet Brown did not let the comment pass. Instead, he lit into Johnson, with an astonishingly hateful and explicit torrent of retorts. "take them teeth out when u Sucking my dick HOE," he replied.

It escalated from there, but it's worth noting that while Johnson goaded Brown, calling him at one point an "ignorant fuck," she never stooped to being threatening. In contrast, here's what Brown said: "I should fart while ur giving me top.… I don't even have to tell u what u already know. Thanks HO! #bushpig…mom says hello... She told me not to shart in ur mouth, wanted me to shit right on the retina," and ending with the classic "your a pathetic bitch." [sic]

Why am I quoting all of these tweets directly, and not blotting out the NSFW words? Because I want you to see what misogyny looks like, unvarnished. I want you to understand that this is how Chris Brown chooses to address a woman who's criticized him – by immediately telling her to suck his dick and then firing off a bunch of demeaning, scatological scenarios at her. This is how guys like Brown think.

After Johnson tweeted she was "done" with the exchange, Brown later came back to misappropriate the old comedy adage that "If u can take a dick, u can take a joke" and demand "Just ask Rihanna if she mad??????" capping it all with a photo of himself before a teeming throng, declaring, "I win!"

Someone in Team Breezy's inner circle must have, at that point, wrested the phone away from Brown, because he then deleted the worst of his tweets and briefly deactivated his Twitter account. He was soon back up and running, however, insisting, "Know that I'm not upset. Just felt like entertaining the ignorance. These bitches crazy." And what's more entertaining than a convicted abuser ordering a woman he doesn't know to fellate him?

What makes the entire gross spectacle not just demoralizing but straight up disturbing is that some of Brown's fans have now taken to one-upping their idol. As Johnson posted Monday, "It's alarming how many death threats I'm receiving via @ replies." Sure enough, her reply stream looks like the written word equivalent of the last 10 minutes of a Tarantino flick.  And lest you think it's just men who are capable of violent, woman-hating crap, au contraire! Behold the lady from Australia who says, "Stfu bitch honestly, i wanna sit on your face and stab 1235 needles in your eyeball, you son of a motherless goat." That's just the really disturbing stuff; that's not even tame, "Shut up, you're ugly and old blah blah blah" rain that has come down on Johnson as well.

In the time since his confrontation with Rihanna in early 2009, Brown has sold millions and won Grammys and, indeed, could hardly ask for a higher perch in the world. He's been rewarded, again and again, for his actions and his arrogance, with more fame and money than ever. And he doesn't seem to have grown up a bit. Instead, he's only been encouraged in his reckless, disgusting behavior – behavior that is then parroted and amplified by his fans. No wonder he's "not upset." He can say whatever he wants with impunity, knowing his followers will eagerly tear apart any woman who criticizes him.