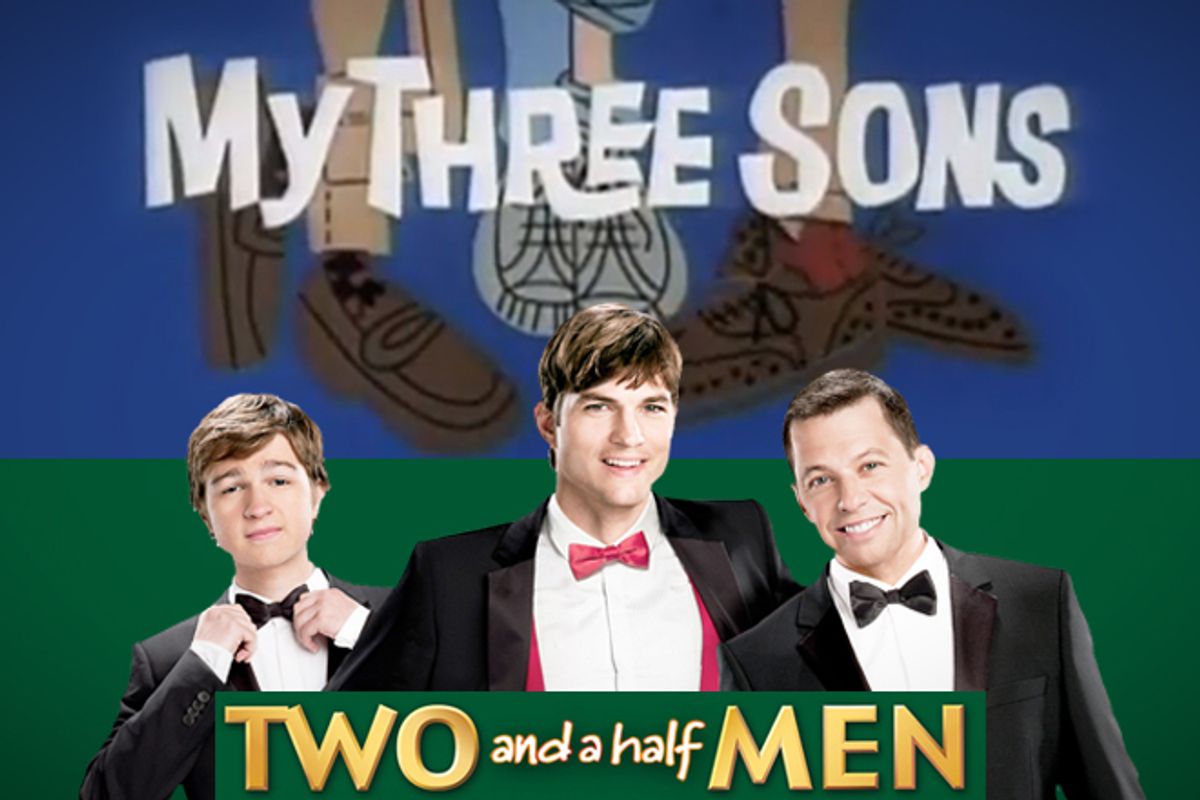 When "Two and a Half Men's" Angus T. Jones made a splash earlier this week by telling the world that watching his sitcom is tantamount to "filling your head with filth," he wasn't just performing a public service to his Christian brethren. He was reminding generations of television viewers of the steady, Emmy-winning work of his costar and TV dad Jon Cryer, and of the scores of widowers and divorcés and uncles and wards who've stepped in and raised so many adorable boob-tube kids without a mother's helping hand. A single mother may be the cause of all that's violent and terrible in America, but a guy changing diapers on his own? That's COMEDY GOLD.

So, for all of us who grew up on the notion that prime time requires at least one hapless dude and a cute kid or two at all times, we would like to take a moment to salute our favorite bumbling, bungling single dads. And honorable mentions to the fathers and father figures who didn't quite make the cut, including "Family Affair's" Bill Davis, "The Courtship of Eddie's Father's" Tom Corbett, "Silver Spoons'" Edward Stratton, "Punky Brewster's" Henry Warnimont, "Hannah Montana's" Robby Stewart, "Raising Hope's" Jimmy Chance and "Suburgatory's" George Altman.

One of television's first single dads, back when the concept was so novel they had to put it right in the title of the show. Embodied by John Forsythe, the endlessly suave future Blake Carrington, Gregg enjoyed five seasons of wacky adventures raising his teenage niece after her parents were killed in a tragic car accident.

The wise center of a small town populated with hicks, drunks and simpletons, Andy somehow made raising a kid – even a kid named Opie -- in a backwater look utterly idyllic.

Fred MacMurray's widower engineer ruled the roost for 12 seasons – long enough for Steve's kids to grow up and have kids of their own, to take in yet another motherless orphan, and even spawn a few conspiracy theories that he was secretly a psychopathic murderer. He may eventually have remarried (a widow, naturally), but he remains television's most durable single dad.

Of course wealthy widower (Conrad Bain) and father of a young daughter Drummond decided to take in the orphaned African-American sons of one of his employees. This sort of thing happened all the time in the '70s.

What happens when a San Francisco reporter teams up with his best friend and his cool brother-in-law to raise three children after his wife dies in a car crash? ABC spent eight seasons offering possible answers, and gave us the lasting legacy known as the Olsen twins.

Tony Micelli, "Who's the Boss?"

He was a Brooklyn father of a young daughter, making a go of it as shoulder-padded Connecticut mom Angela Bower's live-in manservant. The show lasted eight years, and king of the genre Tony Danza, clearly in his wheelhouse, went on to play single dads again on the short-lived "Hudson Street" and "Tony Danza Show."

When Mom took off to find herself, cute musician Nick (Ted Wass) learned to fend for himself and his three kids. Notable for introducing Mayim Bialik to the world and making the word "Whoa" a thing for a while in the '90s.

It was like "Who's the Boss?" -- except in reverse! The domestic worker this time was a lady and from Queens, and the boss was a British widower and father of three (Charles Shaughnessy). The two eventually got hitched, thereby revoking Sheffield's single TV dad status.

Ultimate DILF in the hearts of nerdy fans of the cult series forever, Bluth (Jason Bateman) was the widower good son within the world's most dysfunctional clan, and dad to adorably dorky teenager George Michael.

He shares custody with his ex-wife, but on his brilliantly dark, self-titled show, Salon sexiest man Louie C.K. is always shown bringing up his two young daughters alone. It's the comic's real-life experience as a divorced father that gives a thoroughly authentic bite to his exasperated exchanges.

Louie Raising Hope Sitcoms Two And A Half Men