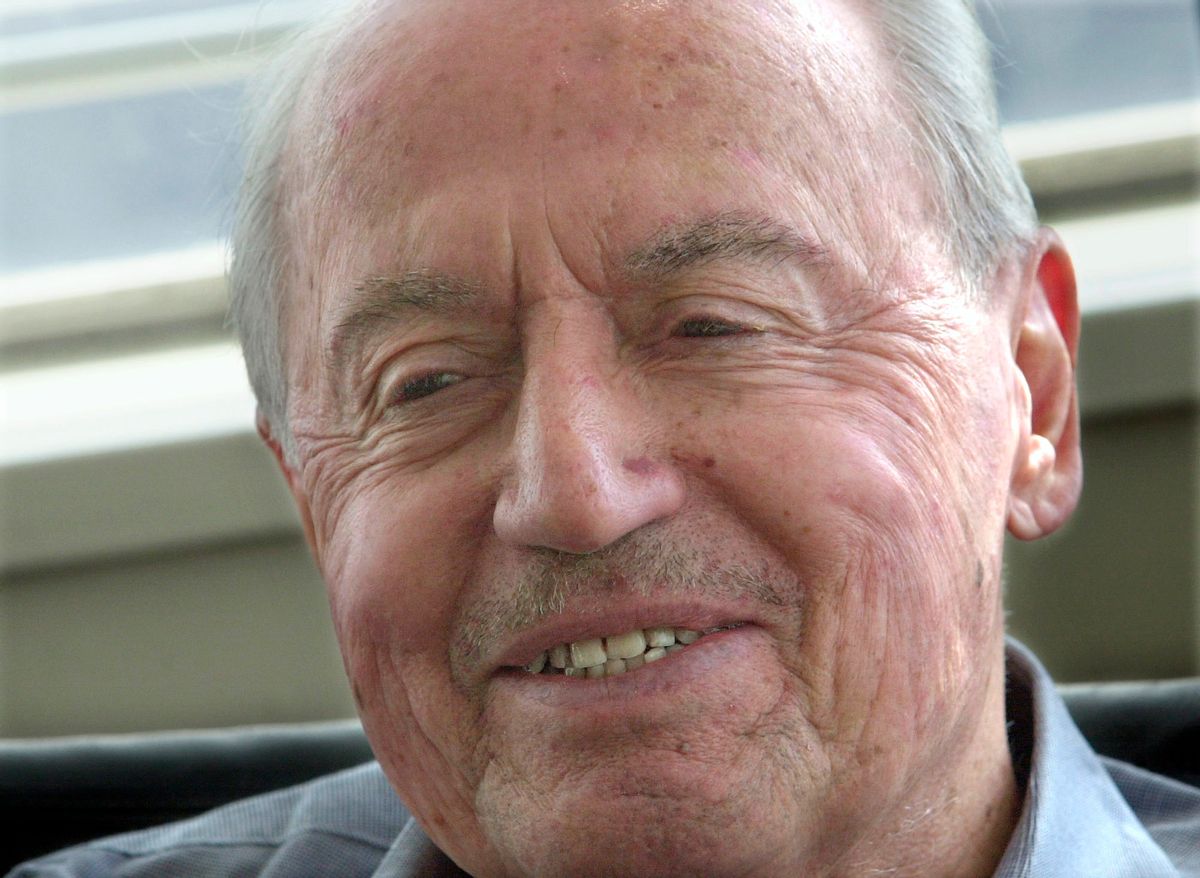 In 1990, I got phone call that changed my life. The man calling was Marvin Miller, whom I knew of as the labor leader who had transformed the Major League Baseball Players Association from a company union to the most successful labor organization in America. He had seen a few things I had written in the Village Voice and asked me if I’d like to work with him on his autobiography, which he later decided to call "A Whole Different Ball Game," published in 1991.

I thought I knew baseball and business. Working with Marvin quickly disavowed me of this notion. But within a year and a half, I got an education. Meeting with him every other day for almost 18 months,  Marvin and his wife, Terry – “the dynamic Terry Miller,” as sportswriter Bud Collins  called her – proved to be a revelation.

To be honest, I really didn’t know how important Marvin Miller was to baseball and all of professional sports. I didn’t find out until I began interviewing his contemporaries. There’s a quote you’ve probably been reading or hearing in the blizzard of praise since Marvin’s death was announced yesterday, the great old-time Brooklyn Dodgers and later New York Yankees announcer Red Barber saying, “Marvin Miller, along with Babe Ruth and Jackie Robinson, is one of the three most important men in baseball history.”

Actually, what Barber told me was, “I’d reckon him to be one of the three or four most important men in baseball history. Babe Ruth and Jackie Robinson, of course. I’d have to put Branch Rickey in the top four. But probably Marvin before him.” I remember Marvin smiling when I told him what Barber had said.  “I certainly wouldn’t object if he put me in back of Branch Rickey,” was his reply.

I’m not sure that Marvin’s legacy is truly understood even now.  In the '90s, he was constantly bombarded with questions like “Now that the players have won, can’t they afford to give something back to the owners?”  Marvin would smile and calmly explain that there is no such thing as “winning” unless the union continued to keep free agency open for new young players coming into the league – they were the ones whom the older players had risked the work stoppages for, to preserve their free agency rights.

He would also explain that there could be no questions of “giving something back” because baseball’s management was, in fact, benefiting from baseball’s “new deal.” (He liked that phrase, because of its political connotations – the original subtitle of his book was “The Sport and Business of Baseball,” which both he and I hated. He managed to get it changed to “The Story of Baseball’s New Deal” in subsequent editions.

Two years ago in the New Yorker, Malcolm Gladwell wrote what seemed to be a laudatory feature on Marvin’s influence not only on baseball but in fact all of situations where talent negotiated with management. His conclusion:

“If one side so thoroughly dominates another in the marketplace, is it really market pricing any more? A negotiation in which a man can get paid twenty-two million dollars for hitting a baseball is not really a negotiation, it is a capitulation, and the lingering question left by Miller’s revolution is whether the scales ended up being tilted too far in the direction of Talent – whether what Talent did with its newfound power was simply create a new authority ranking, this time with itself at the top. A few years ago, a group of economists looked at more than a hundred Fortune 500 firms, trying to figure out what predicted how much money the C.E. made.  Compensation, it turned out, was only weakly related to the size and profitability of the company. What really mattered was how much money the members of the compensation committee of the board of directors made in their jobs. Pay is not determined vertically, in other words, according to the characteristics of the organization an executive works for; it is determined horizontally, according to the characteristic of the executives’ peers. They decide, among themselves, what the right amount is. This is not a market.”

This is wrong in so many ways it’s difficult to know where to begin.  Let’s start here: Executive pay is decided by other executives. The salaries of baseball players are decided by negotiations between the team, the player and his representative. The bottom line is that no one puts a gun to a baseball executive’s head to force him to offer a player a contract. The Texas Rangers offered Alex Rodriguez that $250+ million contract not out of generosity or because they were forced to or because Rodriguez demanded it, but because it helped them bring in a more than $250 million in new revenue from the cable network.  The Yankees paid him even more money not because someone twisted their collective arm but because they had the money and believed he was worth it -- in TV ratings and ticket and merchandise sales. (I could go into an argument here that he was, after all. He won two MVP awards and helped them win their only World Series in the entire decade, but I’ll let that pass.)

The point is that in any negotiation, no one forces a baseball executive to do anything, let alone to show a modicum of common sense. A-Rod didn’t get together with a group of his peers and decide how much his salary would be.

The larger point, though, that so many did not see – and still don’t – is that the Major League Baseball Players Association is a union, and succeeded because it held together as a union.

Oddly enough, this prejudice against the MLBPA is more prevalent among lefties than those on the right. Conservatives, at least some of them, can grasp the concept that everyone deserve to be paid what they can earn on the open market, and that that market is determined by negotiations between labor  -- or, in this case, talent, if you will -- and management. Liberals, particularly if they are baseball fans, have always been inclined to say things like, “Who cares if those guys win their negotiation? They’re  just a bunch of multimillionaires, like the owners.” They also say things like “Why should they be paid so much money for hitting a baseball?”  It never seems to occur to them that they’re the ones who are doing that paying and that if the money didn’t go to the players, the owners would simply pocket it.

This last point is one that needs to be made over and over because each new generation of fans needs to be educated.  The baseball players union may not seem to have much in common with steelworkers (though Marvin, who was an economist with the steelworkers union for many years, would take issue with that) or Wal-Mart employees trying to form their own union, but the inspiration is there. What Marvin told baseball players when he became executive director of the union in 1966 can be true for any union member, “If you hold together, you can have things you want within reason.”

Which is why it was so important for Marvin Miller to be elected to baseball’s Hall of Fame, and also why it will never happen. Today, the day after his death, I’m reading articles in just about every major paper and website in the country ripping baseball’s hierarchy (as exemplified by the mealy-mouthed hypocrite, Commissioner Bud Selig) for keeping the vote rigged so Miller would never make it to Cooperstown. They are right, but they’re missing the more important point. Let’s be honest – what else would you expect from the management class whose collective asses Miller so thoroughly whipped?  (Even if they were too arrogant and mean-spirited to understand that the union’s victories only increased their revenues and vastly expanded the popularity of the game?)

I don’t blame the baseball owners, I blame the players. The simple truth is that if they had recognized from the start that it wasn’t their talent that made them rich but their support of the union, which brought them free agency in the first place, then they would have seen to it that the man who brought them this good fortune was voted into the Hall of Fame. As Bill James shrewdly observed, it’s the players’ balls and bats and gloves that make the Hall of Fame. Without those things, it’s just an empty building. If they had insisted on getting the right people on the committees and changing the voting rule, then Miller would have had a plaque in Cooperstown years ago.

Conceited jackasses like Reggie Jackson never faced up to this responsibility. Reggie was one of the first players to benefit from free agency in a big way, and even before the reserve clause was struck down, Marvin had helped Reggie to negotiate his contract with Oakland A’s war horse owner Charlie Finley.  But when the time came to throw support to Miller in 2003, Jackson declared publicly, “I think only players should be in the Hall of Fame.”  As if anyone asked Reggie to make such a judgment.

Anyway, with the permission of Marvin’s daughter Susan, I’m going to  include here the letter Marvin wrote to Jack O’Connell, secretary of the Baseball Writers’ Association of America, on May 16, 2008:

Paradoxically, I’m writing to thank you and your associates for your part in nominating me for Hall of Fame consideration, and, at the same time, to ask that you not do this again.  The anti-union bias of the powers who control the Hall has consistently prevented recognition of the historic significance of the changes to baseball brought about by collective bargaining. As former Executive Director (retired since 1983) of the Players’ Union that negotiated these changes, I find myself unwilling to contemplate one more rigged Veterans Committee whose members are handpicked to reach a particular outcome while offering the pretense of a democratic vote. It is an insult to baseball fans, historians, sports writers and especially to those baseball players who sacrificed and brought the game into the 21st century. At the age of 91 I can do without farce.

To me, that settles the issue. Last week I visited Marvin at his Upper East Side apartment.  He had two things he wanted to tell me. The first – and this was the last time I would see him smile – was that Sandy Koufax had just called to thank him for everything he had done for baseball. Koufax, who retired the year Marvin was made executive director of the union, never benefited from free agency. Marvin laughed, "Sandy’s always been a class act – but can you imagine Sandy Koufax as a free agent?”

He also proudly related a story about Alex Rodriguez. Several years ago A-Rod and his then-wife stopped to say hello to Marvin and Terry (who passed away in 2009) at an awards ceremony.  The man who didn’t play his first major league game until 12 years after Miller retired knew enough to tell his wife, “This is the man to thank for our vacation home.”

Oh, yes, one more thing Marvin told me: “If they vote me in after I’m gone, please let everyone you know it is against my wishes and tell them if I was alive I would turn it down.”