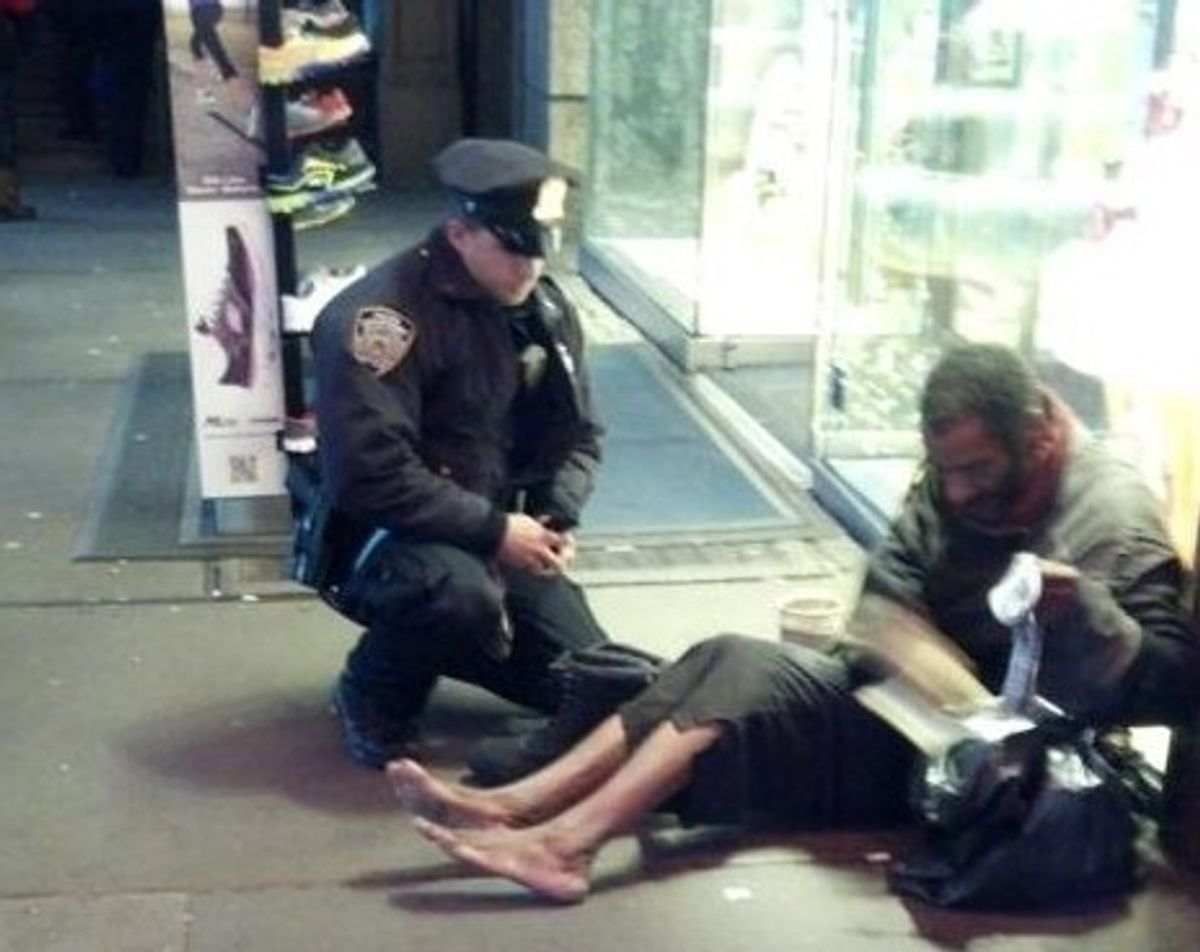 The NYPD have received the gift of holiday-period good P.R.: A tourist in Times Square snapped a photo of an NYPD officer giving a pair of boots and warm socks to a barefoot homeless man. The image -- an undeniably heartwarming scene of protection and service -- became an online sensation once the NYPD posted it to its Facebook page on Tuesday. More than 370,000 users “liked” it as of Thursday morning, and over 109,000 shared it.

Officer Larry Deprimo, the cop who gifted the boots and reportedly told the recipient, "I have these size 12 boots for you, they are all-weather. Let’s put them on and take care of you,” showed the sort of human kindness worthy of sharing online and "IRL" (in real life). Little wonder the NYPD would use the photo of Deprimo as an image boost over social media. There is, however, something galling about the viral celebration of the image as something representative of NYPD's attitude toward the homeless when there is an ongoing battle by homeless advocates in New York to combat mistreatment by cops. Equally, it's worth noting that images of severe police brutality get far less online attention. Meanwhile, reporters and citizen journalists have repeatedly in the past year been physically prevented from filming NYPD aggression.

Bronx-based homeless organizing group Picture the Homeless has for over 10 years been conducting a citywide civil rights campaign specifically aimed at curbing police abuses against individuals sleeping on the streets. PTH highlighted that police regularly use force, arrest and ticket homeless individuals for "disorderly conduct" without citing an offense, essentially (and technically illegally) criminalizing homelessness.

"The NYPD has been on a warpath against the homeless, going back decades," Jean Rice, a PTH member and longtime civil rights campaign leader, told Salon Thursday, adding, "The kindness of one individual officer is a drop in the ocean of the NYPD's pattern and practice of violating homeless people's civil rights. The level of corruption and illegal police behavior that exists in our current city government has not been seen since Teddy Roosevelt  was this city's police commissioner. Random acts of kindness and mere cosmetic adjustments will not provide the progressive reform that disproportionately communities of color in this city need to ensure their survival."

Through surveys and testimonies, PTH is building a case for a possible lawsuit against the NYPD. This hard-fought and ongoing campaign does not, of course, detract from Officer Deprimo's generosity, but it does highlight a counter-narrative about the NYPD that is deserving of vastly more attention.

The disturbing footage of two NYPD officers brutalizing a shirtless, shoeless homeless man found sleeping in a Brooklyn Jewish community center is not undone or counteracted by the photo of Deprimo giving a homeless man boots, nor does the brutality undo the kindness -- that's not how it works. But the NYPD is an institution and should be judged as far as possible by the sum of its acts and effects. Thus, when evidence of police goodness is splashed over social media at a rate and an extent far outweighing evidence of brutality, it's clear that some skewed judgment of the institution is being produced.

It's worth noting too that in New York and other major cities, journalists both professional and citizen have been prevented on numerous occasions from filming or photographing police acting aggressively or brutally. Famously, journalists and photographers were physically removed (some with force) and cordoned off at a distance while police evicted Occupy Wall Street's Manhattan base in Zuccotti Park last year. A New York Times freelance photographer was on one occasion arrested and on one occasion physically roughed up by NYPD officers attempting to photograph arrests (which is legal in New York). It was only this week that the Supreme Court ruled against Illinois prosecutors seeking to enforce a law that banned people from filming police. Items of media showing police kindness must then be viewed in a context wherein conveying police wrongdoing has been prevented both legally (in some states) and at street level.