Too many lawyers? Says who?

A New York Times Op-Ed claims law school is worth every penny. Time to pull apart some of that thinking 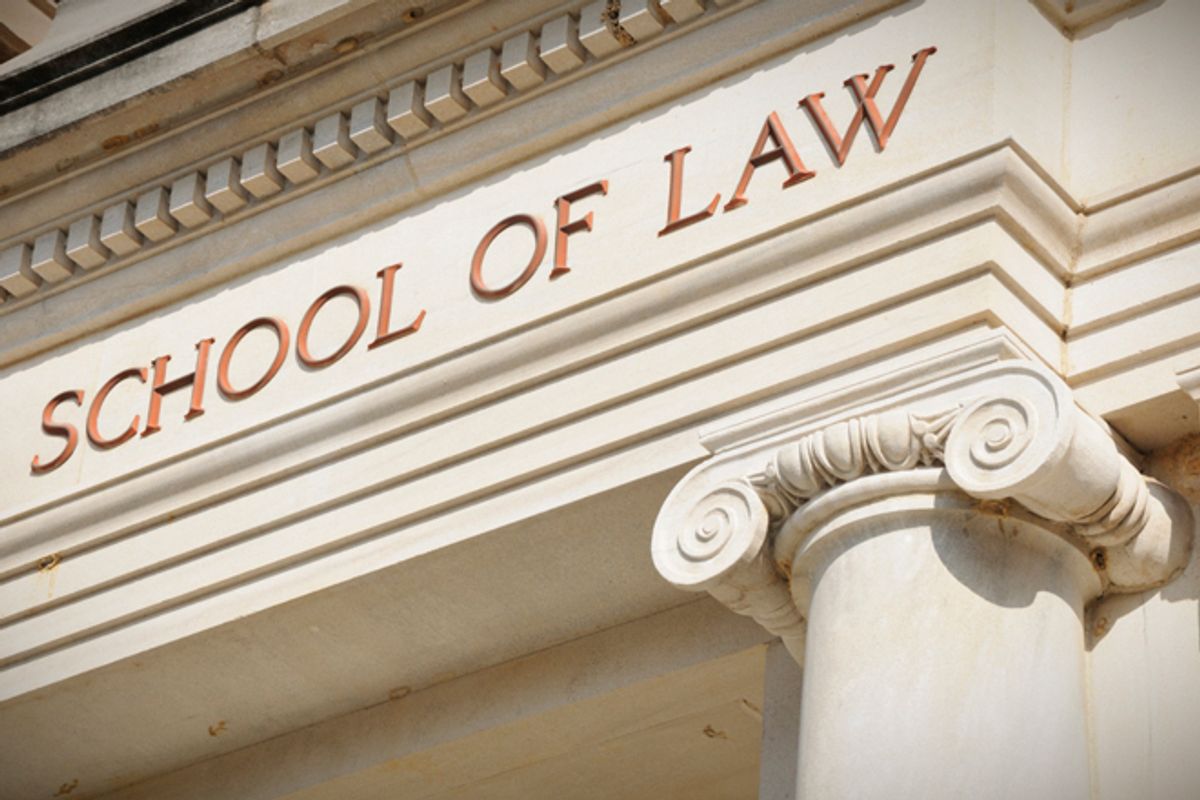 I’m a law dean, and I’m proud. And I think it’s time to stop the nonsense. After two years of almost relentless attacks on law schools, a bit of perspective would be nice.

For at least two years, the popular press, bloggers and a few sensationalist law professors have turned American law schools into the new investment banks. We entice bright young students into our academic clutches. Succubus-like, when we’ve taken what we want from them, we return them to the mean and barren streets to fend for themselves.

The hysteria has masked some important realities and created an environment in which some of the brightest potential lawyers are, largely irrationally, forgoing the possibility of a rich, rewarding and, yes, profitable, career.

The starting point is the job market. It’s bad. It’s bad in many industries. “Bad,” in law, means that most students will have trouble finding a first job, especially at law firms. But a little historical perspective will reveal that the law job market has been bad — very bad — before. To take the most recent low before this era, in 1998, 55 percent of law graduates started in law firms. In 2011, that number was 50 percent. A 9 percent decline from a previous low during the worst economic conditions in decades hardly seems catastrophic. And this statistic ignores the other jobs lawyers do.

If we define “law graduates starting in law firms” in the broadest way possible, by counting every single job any law graduate in the class of 2011 got at a law firm, 41 percent of law graduates whose employment outcomes were recorded (this data is missing for 4 percent of ABA law graduates in the 2011 class) got a job with a law firm.  If we define “starting in law firms” to mean “got jobs as lawyers with law firms,” which is surely how readers will interpret that phrase – that is, if we don’t count people who got jobs as secretaries, paralegals and clerks, i.e., jobs they could have gotten without acquiring a law degree first – that percentage drops to 34.7 percent.  If we limit the phrase to full-time lawyer jobs, the percentage drops to 32 percent. If we exclude new grads who listed themselves as members of “firms” consisting of one lawyer (themselves) that figure becomes 29.5 percent. Statistics here.

Even so, the focus on first jobs is misplaced. We educate students for a career likely to span 40 to 50 years.

Translation: We have been careful to collect no longitudinal data on long-term outcomes for our graduates, so let’s assume that data would be good if we actually had it.

The world is guaranteed to change in unpredictable ways, but that reality doesn’t keep us from planning our lives.

Translation: You can’t win  if you don’t play.

Moreover, the career for which we educate students, done through the medium of the law, is a career in leadership and creative problem solving.

In precisely what ways are law faculties qualified to improve the “leadership” abilities and “creative problem solving” skills of law students?  Please be specific and give examples.  This is an open-book exam subject to the provisions of the Honor Code.

Many graduates will find that their legal educations give them the skills to find rich and rewarding lives in business, politics, government, finance, the nonprofit sector, the arts, education and more.

Translation: If we (again) gather no actual data on the extent to which people with law degrees find long-term career success doing things other than practicing law, and in addition we assume that whatever success we observe anecdotally among non-practicing law graduates can be attributed wholly to the “skills” that law schools supposedly impart to people to do things other than practice law, we start to look pretty good.

What else will these thousands of students who have been discouraged from attending law school do? Where will they find a more fulfilling career? They’re not all going to be doctors or investment bankers, nor should they.

Translation: Don’t blame us if your generation is screwed.  Do you feel lucky? Why not take a three-year spin on the Great Roulette Wheel of legal education, at taxpayer expense?  What else are you going to do, teach English in Japan?

Looking purely at the economics, in 2011, the median starting salary for practicing lawyers was $61,500[.]

The median starting salary for the 36 percent of 2011 law graduates who were in jobs requiring a law degree and whose salary was known was $61,500.  This means that fewer than one in five 2011 law school graduates were known to be making at least $61,500 while working as lawyers.

This average includes many lawyers who graduated into really bad job markets. And the United States Bureau of Labor Statistics reports projected growth in lawyers’ jobs from 2010 to 2020 at 10 percent, “about as fast as the average for all occupations.”

Given that ABA law schools are currently graduating around 44,500 people per year, the BLS estimates of projected growth in lawyer jobs over the next decade indicate that approximately 48.7 percent of law school graduates will get jobs as lawyers -- if we make the highly optimistic assumption that all new jobs in the legal sector will be filled by new law graduates, as opposed to currently unemployed lawyers.

It’s true, and a problem, that tuition has increased. One report shows that tuition at private schools increased about 160 percent from 1985 to 2011.

And starting salaries for law graduates have increased by 125 percent over that period.

Debt, too, is a problem. The average student at a private law school graduates with $125,000 in debt.

The average 2011 private law school graduate took out $125,000 in reportable (non-private) loans over the course of law school. Because interest accrues on these loans during school, this means the average graduate actually had approximately $142,500 in reportable law school debt six months after graduation when the first loan payment came due. This figure does not include undergraduate debt or consumer debt.

But the average lawyer’s annual salary exceeds that number. You’d consider a home mortgage at that ratio to be pretty sweet.

Excluding the one half of all law school graduates who do not work as lawyers has striking implications for this ratio.  Also, does Larry Mitchell have a time machine?  Because the net present value of law degree in 1975 or 1985 or 1995 has essentially nothing to do with the net present value of a law degree in 2016, when the people he is trying to entice into attending law school would graduate.

Investment in tuition is for a lifelong career, not a first job. There are many ways to realize a satisfactory return on this investment. Even practicing law appears to have paid off over the long term.

“The method of ‘postulating’ what we want has many advantages; they are the same as the advantages of theft over honest toil.”  -- Bertrand Russell –
“Assume a can opener.”  Proverbial.

[E]ven in the unlikely case that the law business doesn’t expand with an improving economy.

There is no reason to believe that “the law business” will track a (hypothetical) improving economy.  There are many reasons to believe that law is a shrinking industry, which is declining for structural reasons that have nothing to do with the overall state of the economy.

More opportunity will open to women and minorities, too.

Law firm employment statistics indicate that women law graduates have far worse long-term job prospects than men: only 15 percent of partners at large firms are women, even though women have made up close to half of all law graduates for nearly a generation now.  Statistics for minority lawyers are similarly grim.

As with any industry in transition, changes in the delivery of legal services create opportunities as well as challenges. Creative, innovative and entrepreneurial lawyers will find ways to capitalize on this.

If you fail it’s your fault.

The overwrought atmosphere has created irrationalities that prevent talented students from realizing their ambitions. Last spring we accepted an excellent student with a generous financial-aid package that left her with the need to borrow only $5,000 a year. She told us that she thought it would be “irresponsible” to borrow the money. She didn’t attend any law school. I think that was extremely shortsighted, but this prevailing attitude discourages bright students from attending law school.

Fifty-three percent of the 2011 graduates of Mitchell’s law school did not obtain full-time long-term jobs requiring a law degree.  Hesitating to spend three years pursuing a degree which produces worse than coin-flip odds of getting any job for which the degree qualifies those who get it to perform is not irrational.

We could do things better, and every law school with which I’m familiar is looking to address its problems. In the meantime, the one-sided analysis is inflicting significant damage, not only on law schools but also on a society that may well soon find itself bereft of its best and brightest lawyers.

Pay no attention to that man behind the curtain.