Bing vs. Google: Where should you shop?

A heated battle is brewing over who provides the best results for consumers. Let's test it -- and buy some stuff! 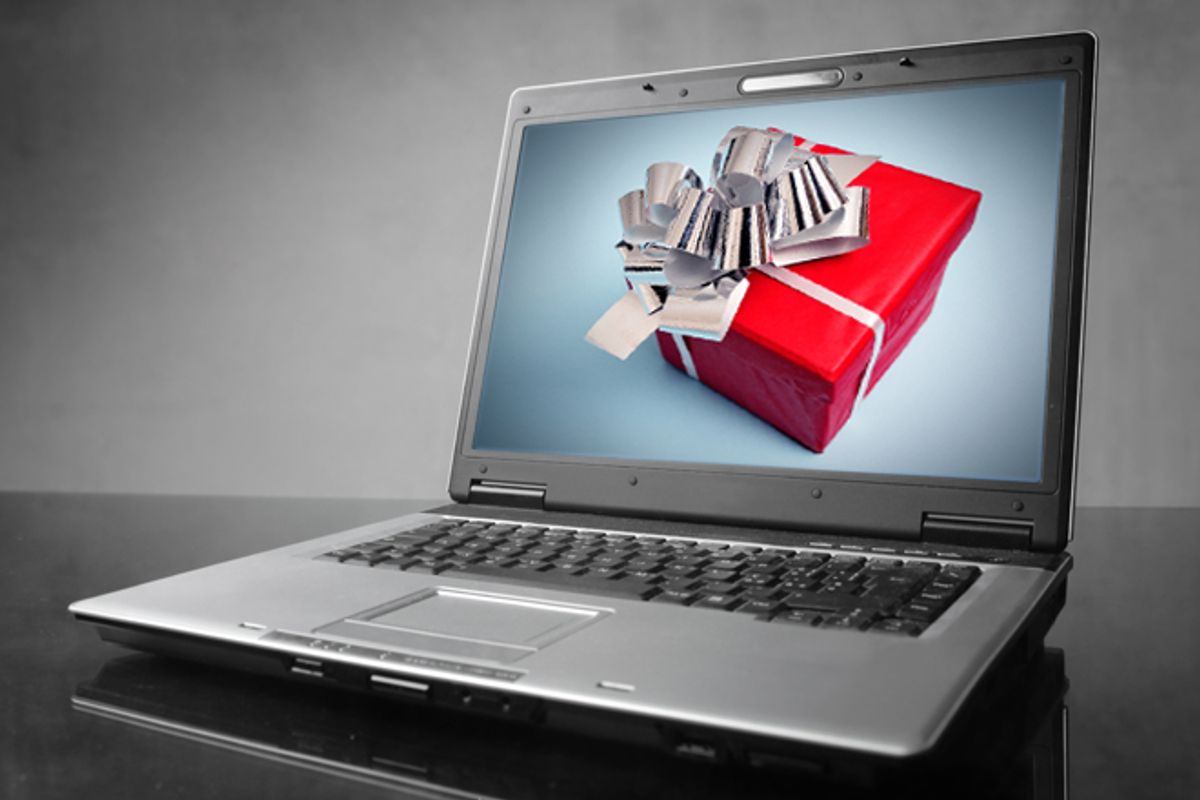 Tut, tut; this isn't what we call the Christmas spirit. Just in time for the full-throated final stretch roar of the holiday shopping season, Microsoft has launched a nasty attack on Google, accusing the search giant of betraying its principles by including paid advertisements for retail outlets in its Google Shopping search results.

In the beginning, Google preached, "Don't Be Evil" -- but that changed ... when Google Shopping announced a new initiative. Simply put, all of their shopping results are now paid ads ...

... We say that when you limit choices and rank them by payment, consumers get Scroogled. For an honest search result, try Bing.

Old-timers might find the spectacle of Microsoft accusing anyone else of unethical behavior designed to manipulate consumers and boost its own bottom line to be unseemly, if not outright laughably absurd and a tad humiliating. Once upon a time, Microsoft would have dealt with a pesky competitor by throttling its air supply and razing its headquarters. Alas, Microsoft no longer has the power to crush its enemies through the sheer leverage of its operating system monopoly control. Today, in terms of market share, Microsoft's Bing search engine is the scrappy Chihuahua nipping at the ankles of Google's Great Dane. Brute force won't work, so Steve Ballmer and co. are getting wily. Thus, Microsoft's "Scroogled" campaign, which simultaneously suggests that Google is screwing its users and treating them with the contempt we are accustomed to seeing displayed around this time of year by one Mr. Scrooge.

The truth is a little messier than Microsoft would have us believe.

No one has done more definitive reporting on the shopping search engine wars than Search Engine Land's Danny Sullivan, here, here, here and here. Sullivan lays out a pretty clear case that Google has indeed fundamentally changed its position on what is known in the trade as "paid inclusion." Introducing advertisements into search results used to be evil, evil, evil. Now, not so much. But Sullivan also notes that Microsoft's own shopping results are hardly above suspicion. Microsoft partners with an operation called Shopping.com to provide specialized shopping search results, and companies do pay to be included prominently on Shopping.com.

For its part, Google argues that anything that is properly labeled as "advertising" or "sponsored" does not fit into the category of "paid inclusion." And certainly, there is no question that Google goes to great pains to provide transparency about what is and isn't sponsored or otherwise paid for on its search results pages. That's not in dispute. More controversially, Google claims that the big no-no of "paid inclusion" should only apply to paid-for results showing up in the "organic search results" that are generated in response to any ordinary query, and that are not labeled as advertising. By implication, then, Microsoft is the company that is being dishonest, because its stark declaration on every page of Bing Shopping that "Payment is NOT a factor used to rank search results in Bing" sidesteps the fact that many of the search results are in fact generated by paid inclusion in Shopping.com.

I asked Microsoft about that seeming contradiction, and received a statement that said, in part: "While merchants can pay fees for inclusion on our third-party shopping sites and subsequently may appear in Bing Shopping through partnerships we have, we do not rank merchants higher based on who pays us, nor do we let merchants pay to have their product offers placed higher in Bing Shopping’s search results.”

I asked Google whether the company was betraying its foundational principles, and received the explanation that following the practice of proper disclosure prevented the company from descending into evil, along with a statement that said, in part: "We made the transition to Google Shopping to improve the shopping experience for our users. We believe that having a commercial relationship with merchants will encourage them to keep their product information fresh and up to date."

I asked Danny Sullivan what he thought about Google's self-serving self-defense and he said, "Bull. Google wants to unilaterally redefine an industry term from how it used it in the past, how the FTC has used it in the past, simply because it's an embarrassing 180 for the company."

Discerning shoppers can make up their own minds as to who is treating the holiday shopping experience with the appropriate authenticity and fidelity to traditional search engine values. But I suspect that most discerning shoppers won't actually give a damn, because most shoppers have only one goal when searching for a product on the Internet that they want to buy, and that is to find a good deal. How well Bing Shopping and Google Shopping deliver on that promise is really the only thing that will determine who prospers.

So I went shopping!

I looked for four items. A rice maker, a French fry cutter, a USB Bluetooth adapter for my son, and a Cuisinart food processor. These items were not chosen arbitrarily -- with the exception of the adapter, I was seeking replacements for kitchen appliances lost in a fire at my home this summer.

The first thing to understand when searching for a retail product on the Web, whether via Bing or Google, is that the whole notion of differentiating between what's an advertisement and what is an "organic" search result is ridiculous. Advertisements utterly dominate the search results returned by both search engines. In almost every case, the first results you see at the top of the page are paid-for ads (marked as such on both Bing and Google). The right hand column of the page, on both Bing and Google, also includes a profusion of ads. Even the "organic" search results, which are now pushed way down toward the bottom half of the Web page (in some cases, you will only see a single "organic" result on the entire page), in the vast majority of cases simply direct you to websites put together by retail outlets who have successfully executed the task of figuring out how to get ranked highly according to the secret sauce algorithm employed by the respective search engine. A pure distillation of collective human wisdom about the best USB Bluetooth dongle out there, you are not going to find.

If you head to the Web to shop, you will see ads. Lots of them.

Clever searchers can find ways to get around this, sometimes. For example, a Google search for "best rice makers" delivers a high-ranked "organic" result that sends you to the extraordinarily useful Consumer Search site, which aggregates professional reviews and user reviews about products into a well-organized, informative package. Bing also rates ConsumerSearch highly, although, oddly, Bing inserted a group of links to news stories about Jerry Rice and Susan Rice in between the top-of-the-page advertisements and the organic results. C'mon, Bing, when I search for "best rice maker" I'm not looking for information about the best wide receiver of all time!

Such tactics are hit and miss. For example, a search for "best French fry cutter" doesn't return any comparable distillation of French fry appliance expertise.

But never mind the organic results and the ads -- the crux of the fight between Microsoft and Google is over the content of their dedicated Shopping search engines. When you search for a product on both Bing and Google, you will often, though not always, see somewhere on the page a group of images of the product in question. Click through to that page, and you are in dedicated Shopping land, where Microsoft declares that relevance is the only factor that determines what results you are looking at, and Google makes absolutely clear that "Google may be compensated by some of these providers."

My general sense, after searching extensively for the four items above, is that Google does a better job of returning relevant results, even if they are compromised by the taint of cold, hard lucre. Google's results are better organized, and often permit useful ways of further defining one's search. For example, in the case of the Cuisinart food processor, Google allowed me to further search by "capacity" and specific features, such as "stainless steel" or "commercial." Google also seemed to understand far better than Microsoft that when I search for a food processor or a rice maker, that is indeed what I am searching for, and not something quite different.

For example, when one searches for rice makers in Bing Shopping, the first five results include a Hello Kitty Rice Cake maker set, a cheapo Tupperware container for cooking rice in a microwave, and a fancy pants Zojirushi fuzzy logic rice cooker that decides for itself exactly how long your rice needs to be cooked. I was intrigued to see that the price range for the Zojirushi rice cooker ranged from $2.54 to $209.99.

Sure, $2.54 is a pretty good price for a state-of-the-art rice cooker (and one that gets good reviews from ConsumerSearch, by the way). But clicking through to the product page leads to a conundrum. Call me paranoid, but I am just not convinced that the $2.54 price tag is a real deal. And, in consequence, I become a little more skeptical of the other results returned by Bing.

Similarly, when one searches for a Cuisinart food processor on Bing Shopping, the very first result returned has a price range for a classic 14-cup processor stretching from $7.95 to $350. Click on the $7.95 offering (a "sponsored offer" from eBay, by the way) and you will discover that what is actually being advertised is a cleaning brush for a Cuisinart.

It seems obvious that by restricting membership in Google Shopping to retail outlets that pay for inclusion, Google ends up with a better data set that is easier to organize in useful ways. That's something that I want when shopping for a product online.

However, I also want other things that aren't reducible to questions of price or capacity or features. I want to know about quality. I want to know about durability. I want to know what people who take their rice very seriously think about the merits of various rice makers. And right now, both Bing and Google are doing a lousy job of incorporating that kind of information in their search results. In fact, by loading up their pages with so many advertisements that the "organic" results where one could dig for that kind of information are absolutely buried, both Bing and Google are actively doing a disservice to the customer.

Seriously, you're better off just searching for your product on Amazon, ranking the results for popularity, and spending some time looking through the user reviews to find the best deal, as judged by the people whose opinion counts the most: the people who actually bought the product you are looking for. I have a lot of confidence in my next purchase, a Weston Restaurant Quality French Fry Cutter, because I trust the reviews a lot more than the algorithm.

Incidentally, you won't find Amazon results in Google Shopping because the company refused to pay to be included. Which seems just a little bit weird -- the biggest online retail outlet on the planet is not a part of Google Shopping? Hrm.