Pick of the week: The handsome star takes out a hit on America in the scathing "Killing Them Softly" 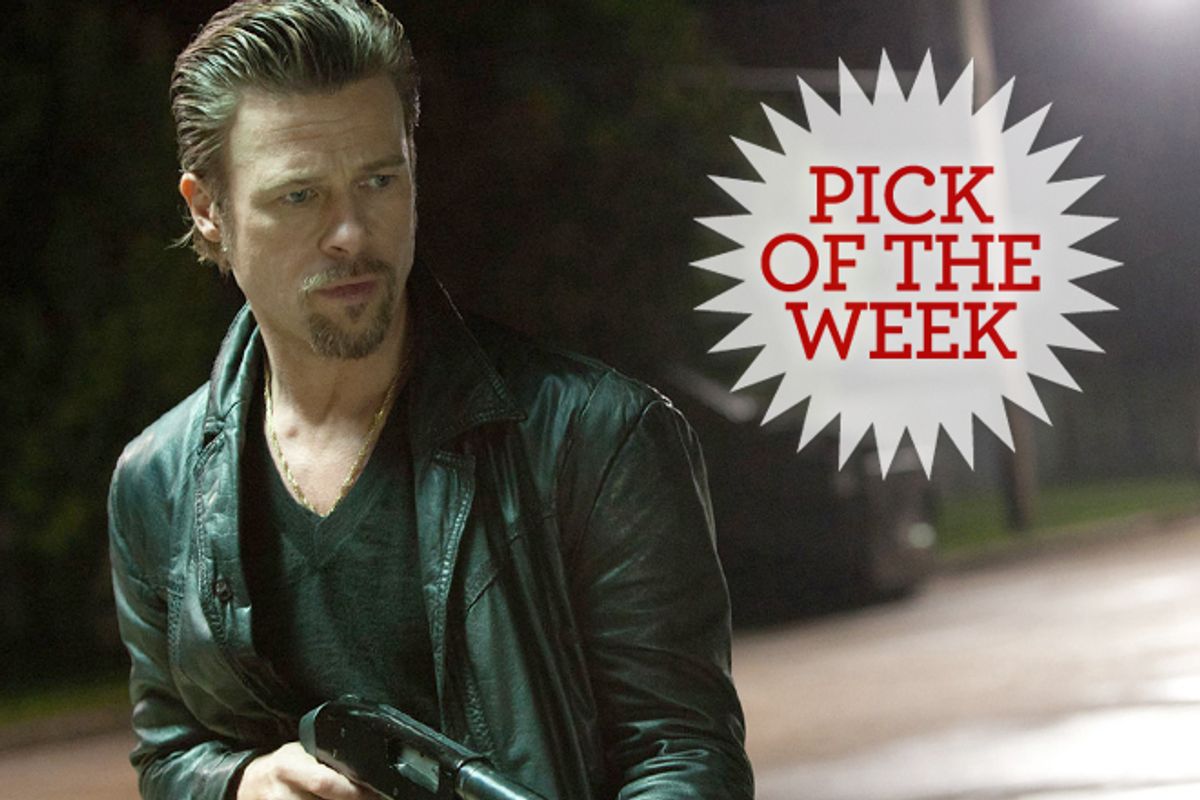 Brad Pitt in "Killing Them Softly"
--

I don’t entirely know what to make of Andrew Dominik’s film “Killing Them Softly,” or whether to recommend it. It’s a severe and stylish movie whose connection to the real world is almost entirely metaphorical, and it suffers from a nearly terminal case of undergraduate nihilist philosophy. For all its crime-movie archetypes – hitmen, mobsters, lowlife petty criminals, dingy American automobiles – and the presence of such iconic stars as Brad Pitt and James Gandolfini, don’t let anyone tell you it’s a thriller or an “action movie.” Those terms imply an entirely different kind of plot and pacing than you get in “Killing Them Softly,” which despite plenty of graphic bloodshed and a heist-gone-wrong story is closer in spirit to a 1970s art-house film than a crime caper.

I wouldn’t even go so far as to claim that I enjoyed “Killing Them Softly” while I was watching it, but it has a weird, buzzing, intense quality that has burrowed its way deep into my brain like some invasive sci-fi organism. This is a deliberately chilly and nerve-wracking experience, and one of the bleakest portraits of American society seen on-screen in the last several decades. Even more than in Dominik’s controversial, slow-motion western “The Assassination of Jesse James by the Coward Robert Ford,” this is a portrayal of a world emptied of emotion and dominated by impersonal greed and instrumental violence. (Dominik works deliberately, and expensively: This is only the 45-year-old New Zealander’s third feature, after “Jesse James” and his 2000 debut, “Chopper.”)

Jackie, the sharp-dressed, sideburned mob enforcer played by Pitt, is vaguely regretful about all the people he has to kill; as the movie’s title suggests, he prefers to limit the trauma he inflicts on his victims, largely because it’s also less stressful for him. His general demeanor throughout all the mayhem suggests a decent chain-store manager afflicted by bureaucratic morons from above and incompetent employees from below. Pitt, of course, also starred in “Assassination of Jesse James” and has said it’s one of his favorite roles; perhaps he appreciates the way Dominik casts him in iconic roles that don’t necessarily flatter him or play to his obvious charms. If Jackie’s the best-looking guy in the movie and its nominal protagonist, that’s more about staying on-task in a universe of screw-ups than it is about decency, let alone heroism. (Jackie joins Matthew McConaughey’s corrupt homicide cop in “Killer Joe” as the year’s most charismatic antiheroes.)

In the world of “Killing Them Softly,” it’s 2008 and yet it isn’t. Everywhere we go in the unidentified and hollowed-out American city where the story unfolds – the movie was shot in New Orleans, but we see none of that city's iconic landmarks and almost no black people; it's more like a dream-state version of Cleveland or Buffalo – TVs and radios are playing news of the financial collapse, or broadcasting debates between John McCain and Barack Obama. Dominik, who also wrote the screenplay, arguably leans a bit too hard on the symbolism here: The real-world rot of America’s fundamental institutions has trickled down to a bunch of dead-end mobsters in this lugubrious crime-movie world, an imaginary space that simultaneously suggests David Fincher’s “Se7en,” Michelangelo Antonioni’s “Red Desert” and a Tarantino movie slowed down on ‘ludes with all the pop-culture jokes taken out.

Mind you, it seems unlikely that Frankie (Scoot McNairy) and Russell (Ben Mendelsohn), the two stringy-haired losers we meet first in “Killing Them Softly,” have any idea who Barack Obama is or what the hell is happening on Wall Street. (Other than the fact that guys in good clothes are making money and they're not, perhaps.) A loudmouth wannabe crime boss named Johnny Amato (Vincent Curatola, aka Johnny Sack from “The Sopranos”) talks them into sticking up a mob-sponsored poker game run by Markie Trattman (the ever creepier Ray Liotta), a mid-level operator who somehow survived an episode in which he robbed his own game years earlier. Johnny’s assumption is that the bosses will take out their frustration on Markie, shrug off the losses and move on. Like low-level financial gamesters the world over, he is unable to see the future beyond his next few thousand bucks, and his assumption is only partly correct.

I’ve already made it sound way too much as if “Killing Them Softly” was driven by plot. In fact the story largely follows a mostly predictable arc and the experience of watching it is dominated by the scum-coated, rain-soaked cityscapes (photographed by the suddenly hot Aussie cinematographer Greig Fraser, who also shot Kathryn Bigelow’s “Zero Dark Thirty”), the deliberately disorienting point-of-view shots and the eruptions of gruesome violence, often seen in poetic slow motion. Jackie gets to town to clean up the mess left behind by Markie, Johnny, the two deadbeat thieves and pretty much everybody else, and finds himself uniformly disappointed and let down. His principal point of contact is an apologetic middle-manager type played by the reliably terrific Richard Jenkins, who approaches the challenges of organized crime with a Dilbert-like lack of fervor. It’s a business like any other, and you have to deal with jerks. Both he and Jackie seem to work for a boss named Dillon, who makes only one brief appearance (a cameo for Sam Shepard) and then disappears altogether.

In its own unrelenting fashion, “Killing Them Softly” is a kind of comedy, as exemplified by the appearance of James Gandolfini as a legendary killer called New York Mickey, summoned by Jackie to handle a hit he wants to contract out. Pitt and Gandolfini’s terrific scene in a deserted airport bar, as Mickey pounds beers and cocktails without a second’s pause and Jackie gradually realizes that even his trustworthy old friend has gone sour, sums up this movie’s strengths and weaknesses in a nutshell, including the fact that it does nothing to advance the so-called plot. This is Gandolfini at his meanest and most unstable, and completes his trifecta of supporting roles this season (the others being as a disappointed suburban dad in David Chase’s “Not Fade Away” and Leon Panetta in “Zero Dark Thirty.”)

You could say Dominik is making an overly obvious point: Crime is business and business is crime, and the whole thing has pretty much gone down the crapper. Except I’m not sure that’s the point at all; the political and economic metaphors employed in “Killing Them Softly” strike me as window dressing on a symbolic drama that’s reaching for grand existential meaning and not quite getting there. At minimum, it’s a flawed but compelling drama with a terrific cast and a strange undertow that will leave you eager to see it again, and even more eager to see what Dominik comes up with next.