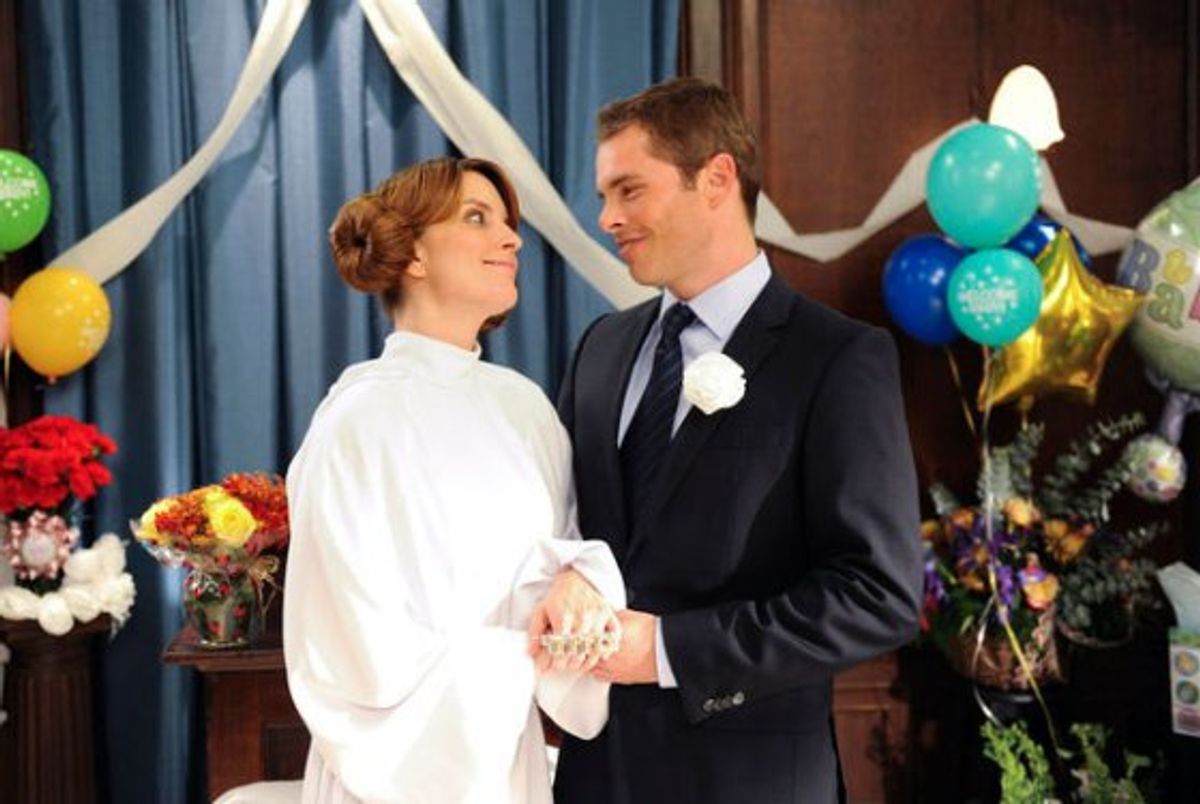 Facebook
Twitter
Reddit
Email
Last night on "30 Rock," Liz Lemon got married, which has us pondering the following questions: Is she a feminist sellout, or just doing what's right for her? Why are weddings the only happy endings? Does it have something to do with the fact that Liz was a sorry feminist to begin with? Willa Paskin and Tiger Beatdown's Sady Doyle — who wrote the definitive Liz Lemon assessment — discuss. (We'll be updating throughout the day.)

Willa Paskin: I went into last night’s heralded episode of “30 Rock,” in which Liz Lemon marries Criss Chros, feeling optimistic. Back in Season 2, in the amazing episode where Carrie Fisher played Rosemary, an older, lonely, unhinged lady writer whom Liz might one day turn into, Rosemary yelled at Liz, “You’re never going to get married, Liz! You’re married to your job!” Liz fled Rosemary’s rat-infested apartment in terror, partially of the rats, but more because of this bit of fortunetelling. Marriage has never been antithetical to Liz Lemon’s desires or principles (such as they are), just as it's not necessarily antithetical to feminism. Her problem has always been her partners, most of whom have been people she could hardly stand, let alone stand to have sex with. But Criss is a non-threatening, sweet, goofy catch and, if they really do want to adopt a baby (a whole other story line to have feelings about) getting married makes sense. Not all women have to want a husband and a baby, but not all TV characters don’t have to want them to make a point.

But while I still maintain that Liz’s getting married is a nice, fine, big-picture story arc, I was a little horrified by some of the particulars of last night’s episode (when I wasn’t laughing. It was very funny). The takeaway of the episode was that all women … want to be princesses? Speak for yourself, Liz Lemon! After spending much of the episode railing against the wedding industrial complex, Liz ultimately decides that, though she’s 90 percent right that weddings don’t matter, "a tiny little part of me that I hate wants to be a princess.” “Liz, it’s OK to be a human woman,” Criss replies. “No, it’s the worst because it’s society,” Liz moans through her hands. As ever, “30 Rock” is skewering Liz for having a strong opinion, this time about weddings  (“30 Rock’s” episodes pretty consistently follow this structure: introduce rigid opinion; blow up rigid opinion; don't replace it with anything), but things get a little regressive and icky when the moral of the story is that deep down all “human women” have a princess complex. And though I liked the Princess Leia callback, I think it’s disappointing that Liz Lemon, for all her huff and puff, could now find herself in this "Styles" section trend story.

Sady Doyle: I love that Liz is the sort of TV character who can yell "I reject the wedding industry's phallocentric fairy-tale grotesquerie" at top volume, then insist that she'll be using gender-neutral pronouns for her children. But as Liz's ideological stance crumbled, and she revealed that she had been afraid to place too much importance on weddings because she'd been single for too long, well ... what's the message here? That all searing feminist critiques of compulsory heterosexuality and the marriage-industrial complex are just put into place because ladies are afraid to feel? That all we need is the right guy to teach us the True Meaning of Wedding?

That said, even though I don't love the idea that Liz's highly edumacated take on the marriage industrial complex is solely the result of her having dated too many losers, it does line up with the rest of her character. Liz has always talked a big game, and backed it up poorly. I think Liz was going to have to get married, eventually. As you pointed out in your last piece, the character has come to stand in for a generation of smart, messy, creative women. And her forever-alone, unlovable status — remember when Frank was so turned off by Liz in a revealing outfit that he needed to vomit? — was always a bit off-putting. I'm OK with Liz getting married, and even needing to be a princess (albeit a very specific space princess) because Liz's disastrous love life was always a referendum on whether she — and by extension smart, opinionated, sloppy women like her —  was lovable. We needed to see the character validated in this way, because if we didn't, we'd all end up really sad.

Willa Paskin: So here’s my question: Is TV incapable of making a happy ending for a woman that doesn’t involve marriage, or a coupling of some kind? How many shows left to end on their own terms don't end with a smooch? “Sex and the City” refused to marry Carrie off in its series finale, because that would have been in direct, horrifying contravention of the show’s position on a certain kind of female self-sufficiency (lots of shoes, lots of friends) only to get Carrie married off in the movies. “30 Rock” was in a singular position on this question because while, yes, it’s not undermining the whole series for Liz to get married, it also wouldn't have undermined the mood of this very cynical series for Liz not to get married. Criss and Liz could have continued on, without that piece of paper — or Liz could have continued on all by herself, lovable, post-making dudes barf at her, but not in a committed relationship, just like her mentor Jack. I don’t think any TV show has an obligation to be a symbol, but if Liz Lemon can’t fight the weddings-are-the-only-happy-ending complex by sheer persnicketyness and sloth, who can?

Sady Doyle: I find it entirely odd that there are two shows on NBC's lineup with central female characters that have come to stand in for Feminism Today: “Parks & Rec” has Leslie, “30 Rock” has Liz. And now that both shows are (probably) coming to a close, both of those ladies are getting married off. As if the ultimate reward for all their lady-centric speeches and grandstanding was ultimately the approval of a real live human male. “30 Rock” is a much cooler, more conceptual, more cynical show, and while Leslie is just basically diving into a chocolate cupcake rainbow fountain of nonstop happiness — not that I mind that particular tone! That is consistent for her, a character who has always been written as earnest, loving and lovable! — “30 Rock” essentially had to do an episode about the concept of marriage, and list an endless number of reasons why  weddings are cheesy, before accepting its own dive into the cheese. (My favorite bit of subtle feminist grandstanding was the fact that the marriage plot was contrasted with a plot about a woman — Jenna, the anti-Liz — being sold into slavery. Commentary!)

I was waiting for an affirmation that being single is not equivalent to female failure. The closest I got, I think, was the lady at City Hall affirming that she would never get married, because it would cut down on her ability to cat-call random engaged hotties. And good for her! But it's odd that single bliss was not even presented as a viable option. Except for Jack, of course.

Willa Paskin:  I know Liz Lemon is one of the few self-proclaimed feminists on television, but it's still odd that she has, as you rightly say, come to stand in for Feminism Today. As you pointed out in your skewering piece on Liz, Liz Lemonism has never been the same as feminism, so much as its sort of shallow relative. I know Liz is one of the few characters who could say something about “the phallocentric wedding industry” and have it be in character, but over its seven seasons, “30 Rock” has been an exercise in exposing the unsustainability and malleability of nearly all of Liz’s opinions.

“30 Rock” is a show written by a bunch of skeptical liberals who are primarily concerned with analyzing their ilk, slicing and dicing the absurdities of bleeding hearts. Conservatism exists on “30 Rock,” but it’s not its subject, which is why Jack gets to be right so often— that stuff is so ridiculous, the writers don’t have to expose it quite like they do the holes and hypocrisies in Liz’s heartfelt, but often ultimately shallow, opinions. Liz has always been kind of a straw-man feminist, in that her positions exist largely so that “30 Rock” can make fun of them.

What was disappointing to me about last night's episode was not that Liz can't hold fast to her position on weddings— Liz never can hold fast, and, in this case, why should she? — but that "30 Rock," for once, did come down on the side of something. And that side was one saying that all women really long to have a special, princessy day. I shouldn't have expected more for or from Liz Lemon, but I guess I did from Tina Fey. (Relatedly: I didn't think the City Hall clerk seemed happy about her single status cat-calling random cuties, just sad.)

Sady Doyle: Exactly. The Liz Lemonist version of feminism has always been grabbing whatever theory you need to justify your choices. Valentine's Day might suck because you're coming off some breakups and feeling down, but if you call it Anna Howard Shaw Day and claim that you're going to the dentist's to liberate all women, you have a political justification for your bitterness. Which is why Liz's breakdown and ultimate concession to the princess fantasy was both irritating and exactly what Liz Lemon would do.

And yet -- despite the fact that Fey herself is happily married, and a very committed mom, and it might just make sense to her as a writer to bring Liz closer to the things that she finds meaningful -- it doesn't necessarily make sense to me that a woman who once could not let her boyfriend visit her actual home, because it was too intimate, would have been carrying a fund of gooey wedding fantasies all along. Leaving aside the politics, it just feels off-key.

I've come to terms with it, though, because the actual relationship between Liz and Criss is subversive in ways that feel meaningful to me. If Liz had to finally land on marriage, at least she came at it from an unladylike direction. I mean, when we think of someone who's always put their career first, picked up and tossed aside a couple of relationships they just couldn't commit to because of their own emotional unavailability, nailed a bunch of hotties (and one movie star), and then, at the age of 42, finally settled down and popped one out with a sweet, dim young thing named Criss ... well, there's a specific gender we tend to attach to that narrative. Maybe Liz hasn't had a disastrous feminine love life, maybe she's just had a successful masculine one. That's what I'm telling myself, anyway. It assuages the sting of being told that we are all Bridezillas at the core. Also, Liz Lemon finally owned, on camera, that she's not hideous. That's got to be some kind of win for us all.
Willa Paskin: Oh, I love that read on Criss and Liz's relationship so much! It also suggests a series finale that could be the simultaneously happy and cynical, the "30 Rock" holy grail: Liz and Criss adopt a baby, Criss stays home with "her or it," and Liz continues to work hard on her terrible TV show, finally able to have it all, because, well, she has a wife.