How did the GOP become so unreasonable on the issue? Here's a hint: Grover Norquist had nothing to do with it 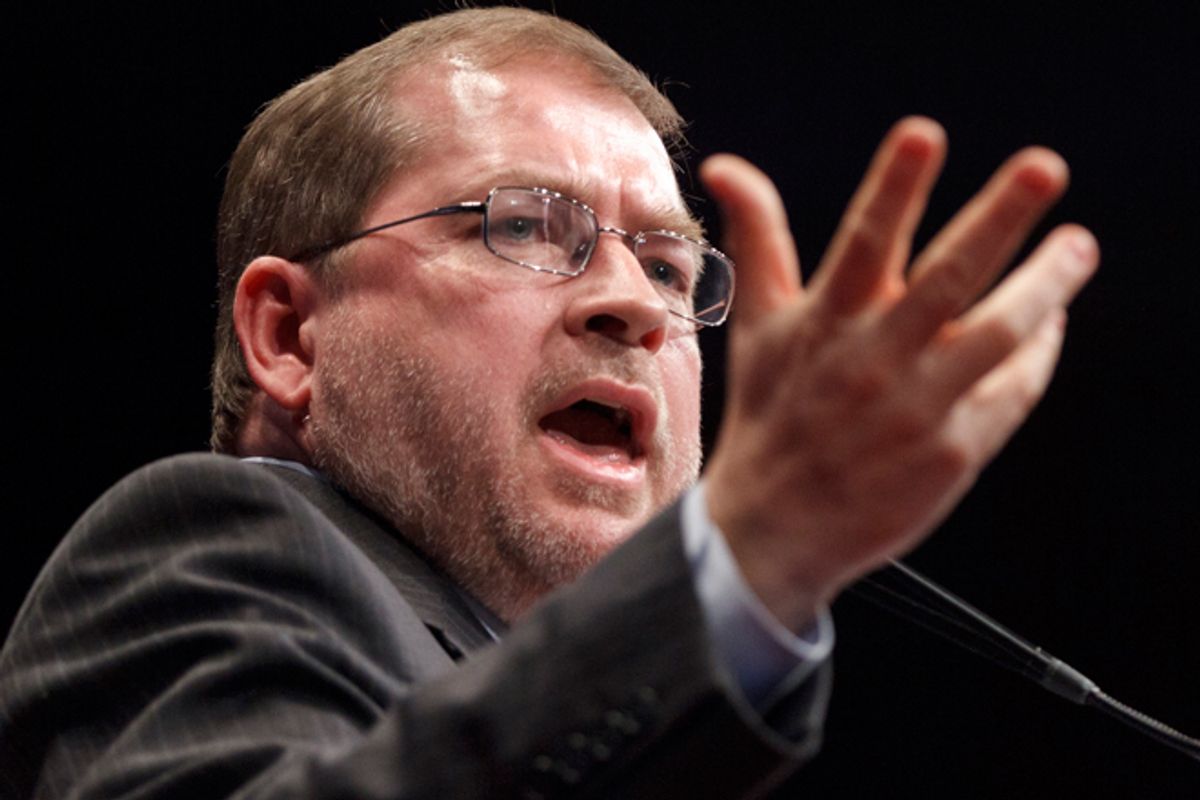 On Sunday’s “Meet the Press,” Claire McCaskill pointed out that she’d met Grover Norquist for the first time backstage, then asked a pretty good question: “Who is he?”

Her point is that Norquist’s visibility and reputation dramatically exceeds his actual political clout. It’s understandable how this has happened. Republicans have evolved over the past three decades into a staunchly anti-tax party, and Norquist is a colorful and endlessly quotable symbol of this absolutism – one who happens to live and work in close proximity to much of the national political press corps. So he gets an awful lot of face time on television and it can sometimes seem as if he and his anti-tax pledge are the reason no Republican member of Congress has voted for a tax hike in over two decades.

But, as Tim Noah wrote last week, Norquist’s actual power in Washington and within the GOP is illusory. In terms of stature and public prominence, he’s been a major beneficiary of the party’s opposition to tax increases – but he hasn’t been the driving force behind it. The real story of the GOP’s modern evolution on taxes played out in several stages, from the late 1970s to the early 1990s.

The first key moment was the advent in the late '70s of supply-side economics, the theory that minimizing income, corporate and investment taxes would result in perpetual economic growth that would benefit everyone. It was a fringe idea at first, championed by economist Arthur Laffer and a handful of Republican members of Congress, most notably Jack Kemp. At the time, the GOP was locked in something of a civil war, between the moderate old guard and a rising New Right. In the 1976 primaries, Ronald Reagan had nearly led the conservative wing to victory over President Gerald Ford, and in the run-up to his 1980 campaign, Reagan decided to embrace supply-side as one of his major platform planks, cementing it as a conservative principle. In his first year in office, Reagan signed a set of sweeping tax cuts into law, and supply-side became mainstream.

Reagan, it’s true, went on to approve a number of tax increases over the course of his presidency, but it's the ’81 tax cuts (along with tax reform in 1986, which brought the top marginal rate – which had been at 70 percent when he took office – all the way down to 28 percent) that conservatives tend to remember. The story of the Reagan years, as they came to tell it, was simple: He inherited a stalled economy, slashed taxes, and unleashed record-shattering economic growth. (Never mind that there were other reasons for the sudden surge in growth that began halfway through Reagan’s first term.)

The next key moment came in 1988, when Reagan’s vice president, George H.W. Bush, sought to succeed him. Bush had been with the old moderate wing a decade earlier, and had ridiculed Reagan’s supply-side prescription as “voodoo economics” during the 1980 primaries. To make peace with the moderates, Reagan had put Bush on his ticket that fall, but Bush recognized that Reagan’s wing had won the war. He spent his eight years as V.P. reinventing himself as a conservative true believer, and sought to extinguish any remaining doubts by including in his 1988 convention acceptance speech this emphatic vow:

It was the most memorable line of the 1988 campaign, but the problem was that Bush didn’t actually mean it. He was still at heart an Eisenhower Republican. And so, confronted with the massive deficits Reagan had left over, Bush put together a deal with Democratic congressional leaders in 1990 to raise taxes. Actually, Republicans were in on it too – at least at first. At the time, the top Republican in the Senate (Bob Dole) and the top Republican in the House (Bob Michel) were also Eisenhower-types who’d never been comfortable with supply-side. So they joined with Bush, and the expectation was that most of the party would fall in line too. Which brings us to the third key moment in the GOP’s evolution: the ’90 revolt.

It was led by Newt Gingrich, the second-ranking House Republican. He had designs on Michel’s job, and saw the tax deal as the perfect opportunity to make his move. Declaring it a sellout of conservative principles that would wreck the economy, Gingrich declared his opposition to the plan and urged Republicans to join him. Most of them did – enough to deliver Bush a humiliating defeat when the package first came to the House floor, but not quite enough to sink the revised version that emerged a few weeks later. Still, Gingrich had made his point: Most of the party was with him, not Bush.

Two years later, Gingrich and every other Republican who’d savaged the ’90 deal got to claim vindication, too, when Bush was defeated for reelection. In the story they told, Bush’s tax hike had caused the early ‘90s recession, thereby guaranteeing his loss at the polls. In reality, the recession had already begun when the tax deal was struck, and it actually ended months after it was implemented. But when voters went to the polls in the fall of ’92, most didn’t feel like the economy was recovering. Never mind all of that, though; the takeaway for conservatives from ’92 was this: Not only is raising taxes a violation of our values – it’s also bad politics. This was the fourth key moment.

And it flowed neatly into the fifth, which took place during the first year of Bill Clinton’s presidency. Clinton had campaigned on a pledge to raise taxes on high incomes, arguing that the affluent had disproportionately benefited from the prosperity of the ‘80s and that the middle class had been left behind. As president, he followed through, pushing for the creation of new 36 and 39.6 tax brackets for high-income earners. He got his way, but without a single Republican vote. The 1993 budget passed the House by the barest margin – 218-216 – and made it through the Senate on the tie-breaking vote of Vice President Al Gore. Republicans guaranteed that it would ruin the fragile recovery, plunge the country into a new recession, cost millions of jobs, and fail to reduce the deficit. Because of the experience of 1990, even normally pragmatic members of the party had no wiggle room; anti-tax absolutism had become orthodoxy.

Of course, none of the dire predictions about Clinton’s budget panned out. As it happened, the rest of the decade was marked by declining unemployment and strong growth. And, thanks to the combined effects of Clinton and Bush tax hikes, this translated into a revenue windfall, resulting in budget surpluses in the final years of Clinton’s second term. But Republicans never really grappled with this, preferring to create a revised history that credited the strong economy to the GOP takeover of Congress in 1994 and to Clinton’s willingness to sign a capital gains tax cut in 1997. Nor was there much pressure on them to grapple with reality. Thanks to the surpluses of the late ‘90s, it was easy for George W. Bush to run in 2000 on a call for deep tax cuts.

Clear through the Bush years and Barack Obama’s first term, the GOP’s posture on taxes remained unchanged. But in the wake of his reelection, Obama now has considerable leverage to force Republicans to sign off on rate increase of some sort. It’s still far from clear they will, but some of them have been making noises recently that no one in the party has made for more than two decades.  If Republicans do end up voting to increase tax rates, it will obviously be a big deal. But it won’t represent a failure on Grover Norquist’s party any more than the anti-tax absolutism of the last 22 years has represented a success on his part.