As austerity measures cripple Britain's sick and poor, the official line on inherited royalty is "delight" 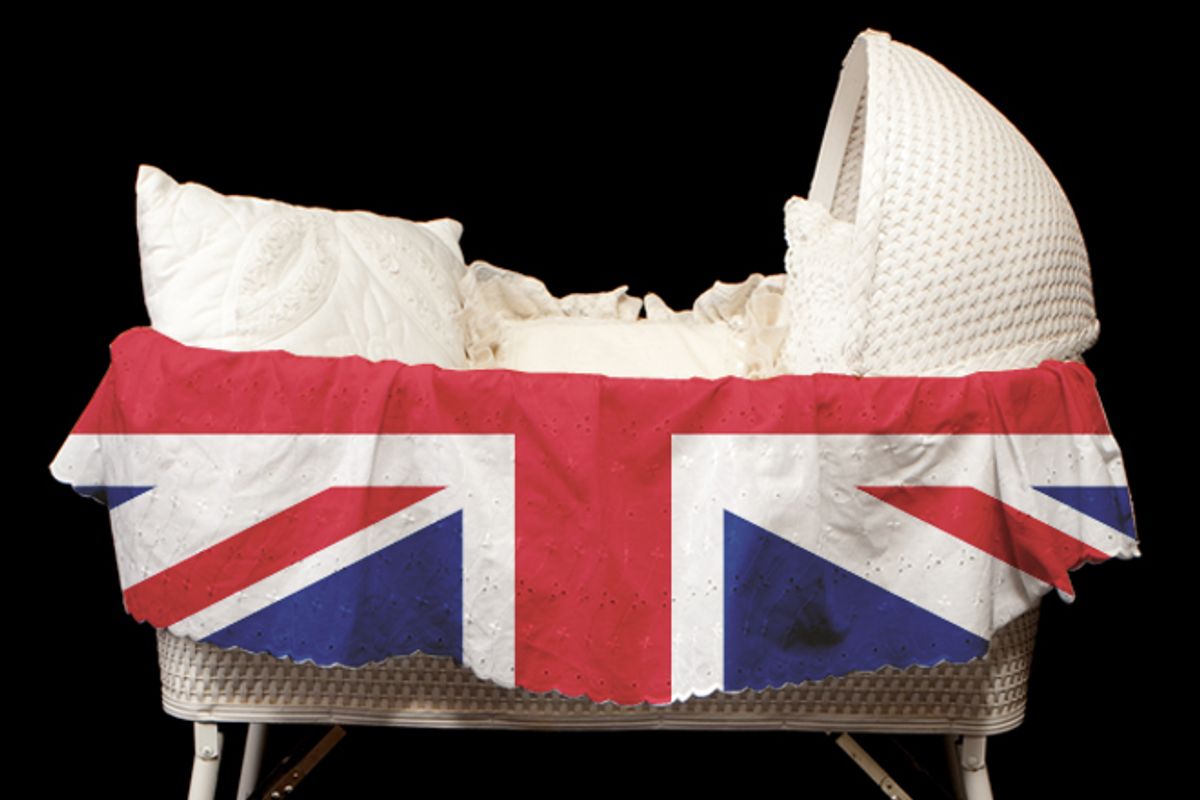 British Prime Minister David Cameron took swiftly to Twitter to express delight at the news that the Duke and Duchess of Cambridge are expecting a baby. A sign of the times indeed: age-old concern about the preservation of the royal bloodline amplified across cyberspace at breakneck speed. Plus ça change, plus c’est la même chose.

Cameron's tweet is reflective of a broader narrative in which this royal pregnancy is couched. "They will make wonderful parents," without mentioning ascension to the throne. It's a treatment now common in discourse about the royals: to talk of them like beloved characters in a soap opera and judge them simply as husbands, wives, newlyweds, brothers, lovers and parents. Let's talk about baby bumps, breast milk or bottles. Let's not mention that nagging anachronism -- we're not just talking about young, expectant parents -- we're  talking about royalty.

With the past two years in a Britain heavily punctuated by royal celebrations -- Will and Kate's wedding, the Queen's Diamond Jubilee -- the standard arguments between republicans and royalists have been hashed out ad nauseam. We've heard, for example, that British taxpayers spent $57.8 million on the royal family last year. It's an expense that a nation crippled by austerity measures, facing even deeper government cuts to front-line public services, can scant afford. We've heard too that Obama's family cost U.S. taxpayers $1.4 billion last year alone -- 20 times the cost of the royals -- but, after all, America is far larger than Britain and Obama was, at the very least, elected.

Republicans and royalists both point out that Britain's sovereignty no longer depends on a real sovereign. Some, therefore, see the exploits, trials, tribulations and celebrations of the Windsors as a harmless, morale-boosting sideshow. Others more critical see the Windsors as a gross symbol of inherited privilege, perpetuating a nationalism rooted in (and largely indistinguishable from) imperial pride -- but a sideshow nonetheless.

But the monarchy is far from pointless. To argue that the existence of the monarchy is no big deal either way is to miss the important function it plays.  It is, after all, a big deal that rigid social hierarchy upholds this family in a place of unchallenged importance. It matters that William and Kate, two grinning, waving, all but silent individuals command so much attention by sheer virtue of birth and marriage. The British government's latest plans to take away benefits from people aged under 25 who are not earning money are enough to highlight how very much inherited privilege can matter.

It is a very big deal indeed that the same year that austerity cuts hacked into Britain's welfare state and riots blazed through London, Britons sat cheerily under Union Jack bunting and waved like obedient feudal subjects as a royal bride paraded through the capital on her wedding day. Five thousand police officers and 1,000 soldiers stood guard during William and Kate's wedding; London's squats were preemptively raided with over 50 preemptive arrests made. The monarchy matters very much indeed when public dissent against it is forcibly prevented.

Fans of the British monarchy often celebrate it as a symbol of constancy -- a stable ever-presence, a piece of Britishness that persists through internal familial drama and national crises alike. What better assurance of this than the promise of a new royal baby, begat by beloved, uncontroversial Wills and Kate. It is the embryonic equivalent of a "Keep Calm and Carry On" poster -- a symbolic vessel into which tabloid fantasies of united Britishness can be poured.

But as my good friend and colleague Laurie Penny has often pointed out, now is no time for Britons to keep calm or carry on. "Over the past four years, an all-out assault has been underway against the disabled and unemployed in Britain," Penny wrote this week, responding to news of even deeper budget cuts in our home country. She added, "The attacks have come on all fronts, from the financial to the moral – rewriting the social script in this country so that the needy are no longer full human beings with just as much right to a life as anyone else, but parasites, scroungers, burdens on the state, barely even human."

Anglophiles worldwide will watch eagerly as Kate begins "to show." Britain will in nine months' time be plastered again in gaudy flags and tabloids will ponder whether William will be a hands-on dad. Alan Rusbridger, the Guardian's editor in chief, on Monday posted via Twitter the story he wrote about the announcement of Princess Diana's first pregnancy. Much has changed in the three decades since Rusbridger wrote that story, but in 1982, as now, Britain was crippled by unemployment under a Tory leader and then, as now, the official line on the royal pregnancy was "delight."