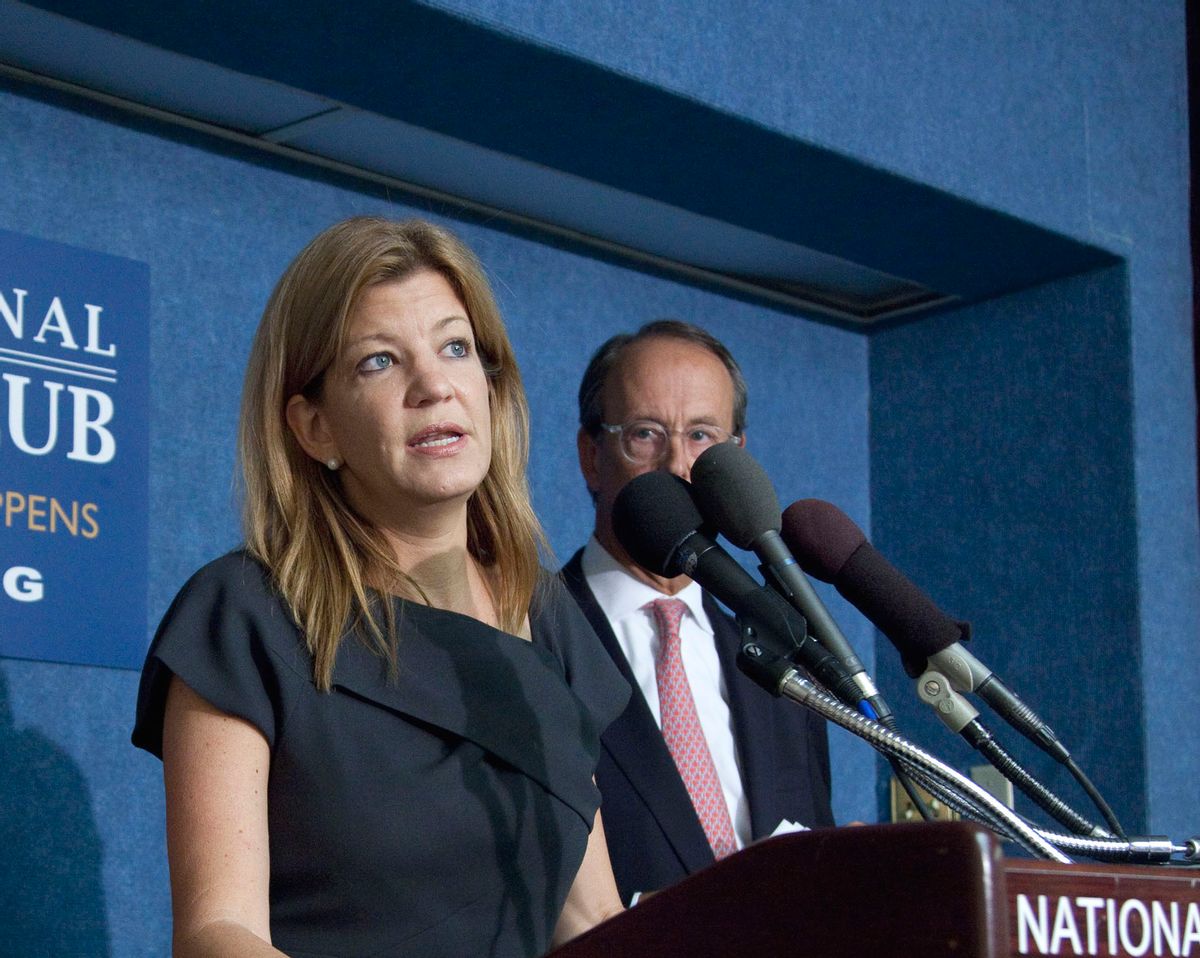 For those familiar with Ayn Rand's writing, the question "Who is John Galt?" is succinct shorthand to summarize conservatives' ideological campaign against government. But to really appreciate how that crusade operates on a day-to-day basis in the most important political battles of the moment, the best question right now is, "Who is Maya MacGuineas?"

The incurious political press' answer to that query can be seen in a quick Google News search of her name. As you will see, she is one of the most oft-quoted, and therefore influential, "experts" in the so-called "fiscal cliff" negotiations. Most often, she is simply described by Washington reporters as the president of the "nonpartisan" Committee for a Responsible Federal Budget and, in that role, as the lead coordinator of the so-called "Fix the Debt" coalition.

Though words like "nonpartisan" are designed to cast both groups, and MacGuineas herself, as apolitical and ideologically dispassionate, the boards of both organizations (which you can see here and here) are teeming with business executives and lawmakers-turned-corporate lobbyists. That is, they are teeming with precisely the kind of hyperpartisan, ideologically driven Big Money interests that have a financial stake in balancing the budget in a way that at once prevents tax increases on the rich and cuts or privatizes social programs.

That latter goal is particularly important to these folks because they rightly see a privatized Social Security as a profit machine for the financial industry. That's almost certainly why, as CNN reports, Wall Street–coddling Republicans are "insisting that Social Security reforms be part of" the "fiscal cliff" negotiations. This, despite the indisputable facts (acknowledged even by Ronald Reagan) that Social Security has almost nothing to do with the national deficit or debt.

That's where MacGuineas comes in. With burn-the-village-to-save-it talking points, she and her paymasters are pretending that they want Social Security to be part of the "fiscal cliff" negotiations in order to strengthen the program for the long haul. But a look at MacGuineas' long record shows a wily operative primarily devoted to one goal: severely cutting benefits.

Back in 2005, as President Bush was championing a plan to reduce benefits and turn Social Security into Wall Street–managed private accounts, MacGuineas and an operative at the right-wing American Enterprise Institute jointly published a National Review article advocating for that very idea.

Likewise, in 2011, MacGuineas published a CNN Money op-ed explicitly calling for "benefit reduction(s)" and slamming President Obama for "not accept(ing) an approach that slashes benefits for future generations." Not surprisingly, she didn't bother to mention that the minimal revenue challenges within Social Security could be most easily solved by simply lifting the income cap on payroll taxes. She didn't mention it, of course, because while such a proposal is popular among most Americans, it is quite unpopular among the rich folk who pay her salary.

But perhaps the most illustrative evidence of MacGuineas' true motives can be found in the 2008 Heritage Foundation paper she co-authored with Stuart Butler, a top official of that archconservative organization. Here's the crux (emphasis added):

As quickly as possible, we should phase in a means test for premiums and benefits for Medicare and Social Security. The sooner the scaling back of unnecessary benefits is phased in, the less other programs will have to be cut. We support including current and near-retirees in this change ...

We also support speeding up the increase in, and further increasing, the retirement age. Under current law, the normal retirement age is scheduled to rise from 66 to 67 between 2017 and 2022. This increase in the retirement age should be accelerated, increased further, and indexed to longevity ... to reflect the growing life expectancy of the population. This change would generate savings both by allowing individuals more years to accumulate personal savings and by allowing for fewer years of collecting benefits ...

MacGuineas' choice of Butler as an ideological ally and writing partner on Social Security issues is revealing, to say the least. After all, Butler is the champion of what he calls a "Leninist Strategy" to dismantle the entire program.

If that sounds like hyperbole, peruse his political strategy memo for Social Security -- literally called "Achieving a Leninist Strategy" -- for yourself. Here's one of many revealing passages:

What we must do is construct a coalition around the (privatization) plan ... That coalition should consist of not only those who will reap benefits from the IRA-based private system ... but also the banks, insurance companies and other institutions that will gain from providing such plans to the public.

In all, Butler outlines a strategy of marshaling corporate resources to slowly but surely sow hysteria -- the kind that eventually results in the conditions for "radical change to take place." Put another way, he outlines a blueprint for dismantling Social Security -- the very same one that his colleague MacGuineas and her corporate front groups have been implementing for years.

When considered in the context of this history, it becomes clear that these same forces are now desperately trying to include Social Security in the "fiscal cliff" showdown because they see a chance to achieve their ultimate -- if now unstated -- goal. Key to doing that is manufacturing the pretense of dispassionate empiricism -- and, as evidenced by her ubiquitous billing as a "centrist," MacGuineas has found a political press willing to help her.

But don't be fooled -- in a country where polls show the majority of people don't want Social Security cut, she and the groups she leads are anything but representative of the "center" of public opinion nor are they non-ideological. They are at the fringe, they are motivated by hard-core ideology and they intend to make the most of this moment -- public desires and rational policy be damned.