Why are women scared to call themselves feminists? 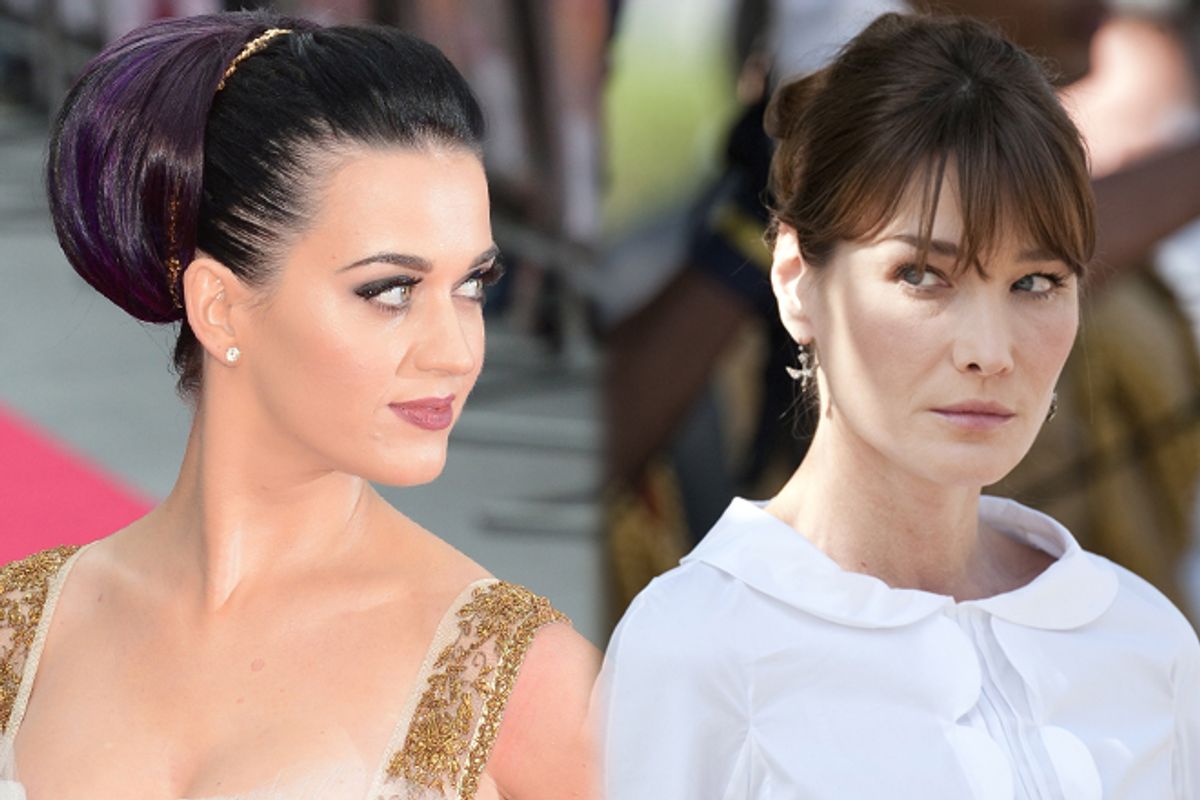 It's a glorious time to be a declared non-feminist. This weekend, Katy Perry accepted Billboard Woman of the Year award by announcing to the world, "I am not a feminist, but I do believe in the strength of women." Way to take home a prize for womankind there, Perry. And last month, the former supermodel/first lady of France Carla Bruni-Sarkozy declared in a magazine interview that "I'm not at all an active feminist. On the contrary, I'm a bourgeois. I love family life, I love doing the same thing every day." Because you can't be bourgeois, love your family, or value stability and be a feminist. It's in the manifesto.

Bruni-Sarkozy added, "We don't need to be feminist in my generation." As a member of Bruni-Sarkozy's generation, let me address that. Ha! HA HA HA! No, we don't need feminism at all! Women over 40 are too valued and respected for that! They don't have their looks scrutinized and mocked; they don't face skepticism that they're too old to do their jobs; they aren't the punch lines of garish jokes about predatory cougars. Ha ha ha!

Perry and Bruni-Sarkozy are in esteemed company. This past summer, Yahoo CEO Marissa Mayer explained that while she believes in "equal rights" and that "women are just as capable," she believes feminism itself is a "more negative word." Academy Award winner Melissa Leo, meanwhile, told Salon back in August, "I don’t think of myself as a feminist at all. As soon as we start labeling and categorizing ourselves and others, that’s going to shut down the world. I would never say that." And Katherine Fenton, the young lady whose presidential debate question about the wage gap triggered Romney's absurd "binders full of women" response, told Salon she was "absolutely not" a feminist, explaining, "I’m a 24-year-old woman that lives in the United States and feels like I should be treated the same as anyone else. That makes me a normal human being."

If you've given it a lot of thought and study and come to the conclusion that nope, this feminism thing really isn't your bag, OK. Godspeed and I wish you well. Feminism is about respecting each other's choices, after all, and as a feminist I respect yours. No, wait, come back. Are you sure about this? Really? You know, you don't have to be some angry, man-hating termagant. In fact, if that's your idea of what a feminist is, you may be basing your image on what the most loathsome trolls on the Internet call us. Well, not "termagant" because they can't spell it, but you get the point. Do you trust the perception of creeps?

Let me just point out that if you believe in the strength of women, Ms. Perry, or their equality, Ms. Mayer, you're soaking in feminism. If you're like Ms. Bruni-Sarkozy and want to explain that "I imagine I am if feminism means claiming one's freedom. But I am not if it means being committed in an active way to the fight that some women are still leading today I admire their bravery a lot, but I have chosen to commit myself elsewhere," you should know that "the fight" is just being an autonomous person in the world. And if you're like Ms. Fenton and think feminism means being treated like "anyone else," remember that there aren't a whole lot of "anyone else" options out there. You're basically admitting that masculinity is the norm and that all we can do is aspire toward some kind of equitable footing in a man's world. This sounds like a job for … feminism!

It's not that feminism is one perfect dogma, or that those who claim participation in it have it all figured out. Feminists argue among themselves and there are some real pieces of work out there who call themselves feminists. Perhaps that's why someone like Katy Perry, who's incited the rage of feminist writer Naomi Wolf  for her provocative "Part of Me" video, feels this a revolution she doesn't have a role in. But when Perry, a woman who this weekend walked a red carpet for the Trevor Project holding a sign that said "Be proud of who you are" says she doesn't want to identify as a feminist, it's fair to ask, who is she then?

You can call yourself or not call yourself whatever you want, but consider this. Nobody enjoys it more when a woman says she's not a feminist than a misogynist. Nobody gets more gloatingly self-congratulatory about it, or happier about what "real" women don't need than someone who doesn't like women very much, especially not the uppity, outspoken, wanting pay equity and reproductive freedom types. Consider that any word that feared and derided has incredible power. And how beautiful and strong that makes it.