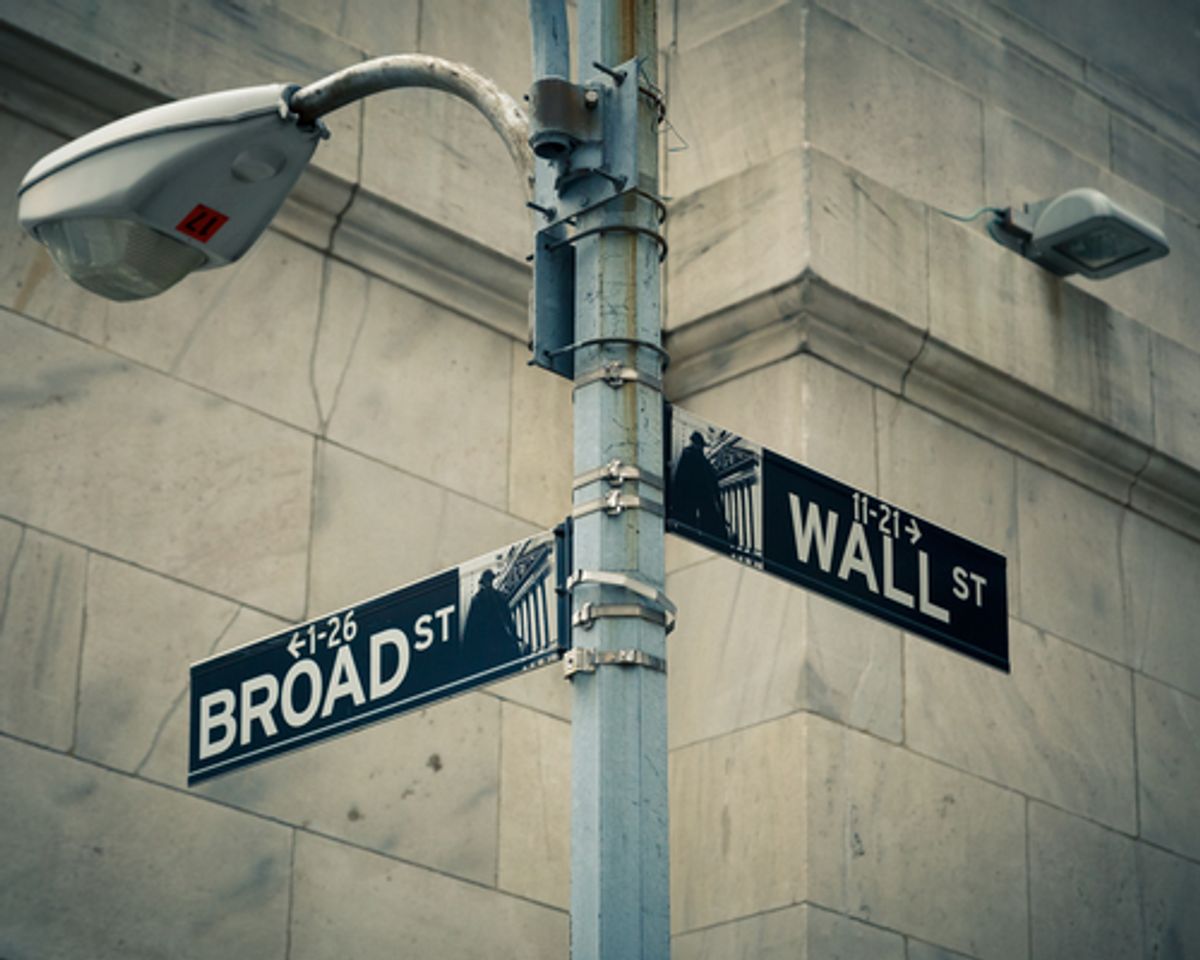 New York magazine calls it a “Mass Movement for Millionaires.” The New York Times' Paul Krugman sums up the idea: “Hey, sacrifice is for the little people.”

The Campaign to Fix the Debt is a huge, and growing, coalition of powerful CEOs, politicians and policy makers on a mission to lower taxes for the rich and cut Social Security, Medicare and Medicaid under the cover of concern about the national debt. The group was spawned in July 2012 by Erskine Bowles and Alan Simpson, architects of a misguided deficit reduction scheme in Washington back in 2010. By now, the "fixers" have collected a war chest of $43 million. Private equity billionaire Peter G. Peterson, longtime enemy of the social safety net, is a major supporter.

Corporations represented by the fixers have collected massive bailouts from taxpayers and gigantic subsidies from the government, and they enjoy tax loopholes that in many cases bring their tax bills down to zero. Sometimes their creative accountants even manage to get money back from Uncle Sam. For instance, according to Citizens for Tax Justice, Boeing has paid a negative 6.5 percent tax rate for the last decade, even though it was profitable every year from 2002 through 2011.

These CEOs talk about shared sacrifice, but it seems that they don’t intend to share anything but your retirement money with their wealthy friends. As New York mag reports:

“Most on-the-record comments are a mishmash of platitudes about shared sacrifice and working together for the good of the country. But interviews with a number of organizers and CEO council members point to a massive networking effort among one-percenters — one that relies on strategically exploiting existing business relationships and appealing to patriotic and economic instincts."

As the Fix the Debt gang moves around the country spreading their message, they are starting to attract public protests. On November 27, they were greeted in North Carolina with a rally from NC Progress, which called for an end to the Bush tax cuts for the wealthiest 2 percent and told the group to keep its hands off the middle-class wallet. The fixers are often vague about their mission, and they tend to speak in coded language that conceals their actual goals. Let’s have some blunt talk about what the fixers want to do and why they want to do it – talk you're unlikely to hear in mainstream media supported by corporate advertising.

1. “Fix” means cut: When they say “fix” Social Security, they mean cut Social Security. Fixers want to convince the public that a well-managed, hugely popular program that does not add to the deficit (it’s self-funded) is somehow in crisis and requires intervention in the form of various cutting schemes. They seek this because many of the rich do not want to pay taxes for Social Security, and financiers want very much to move toward privitization of retirement accounts so they can collect fees on such accounts.

2. “Reform” means rob. When the say “reform” the tax code, they mean “make taxes even lower for the rich.” The wealthy do not pay their fair share of taxes in the United States, which is a major reason there is a large deficit in the first place. When the very wealthy pay lower tax rates than ordinary working people, the result is an increasing redistribution of income upward that puts the U.S. in the top 30 percent in income inequality out of 140 nations, according to the Central Intelligence Agency. We’re a shameful #42. Income inequality is not only unfair, it’s dangerous and makes society unstable.

3.“Bipartisan” means all of the rich. Fix the Debt is a pro-business ideological movement pretending to be a bipartisan group of concerned citizens. But the group is really just a coalition for the greedy, unpatriotic rich. There are plenty of financiers and other 1 percenters in the Democratic Party, and some of them have decided to join forces with their GOP counterparts to work toward a goal that means a great deal to all of them: Making the rich even richer.

4. “Concern” means covet. There was a time, a couple of generations ago, when business leaders would not dare to go public with their desire to increase income inequality and stick it to hard-working Americans. When Owen D. Young, CEO of General Electric in the '20s and '40s, spoke to an audience at Harvard Business School in 1927, he emphasized that the purpose of a corporation was to provide a good life not only to owners, but also to employees. Corporations, he said, were meant to serve the larger goals of the nation:

“Here in America, we have raised the standard of political equality. Shall we be able to add to that, full equality of economic opportunity? No man is wholly free unless he is both politically and economically free.”

Fast forward to 2012: Jeffrey Immelt, the current CEO of GE, is a member of the Fix the Debt Campaign, which is designed to lower the expectations of hard-working Americans people. Goldman Sachs honcho Lloyd Blankfein explained this recently in a CBS interview:

5. “Fiscal conservative” means economically confused. Longtime Wall Street executive Steve Rattner, one of Obama’s auto bailout czars, has been using his influence to attract tycoons from the financial industry to the Fix the Debt movement. Over the last year, Rattner has been on a crusade to convince Americans that they should put aside their worries about real crises like unemployment to focus on the deficit. Rattner, like many of his cohorts, poses as a moderate whose thinking is needed to counter the advice of respected economists like Nobel Prize-winners Paul Krugman and Joseph Stiglitz, who have long been warning that defict hysteria is not only counterproductive, but based on a lack of understanding of how the economy actually works.

Political economist Thomas Ferguson, who teaches at UMass Boston and is a senior fellow at the Roosevelt Institute, described the dubious policies the fixers defend:

“Talk about the audacity of hope! The people who brought you the Great Recession by pushing deregulation and financial leverage to insane dimensions are back. Now they propose to ‘fix the debt’ by throwing average Americans who generously bailed them out in 2008-09 over the fiscal cliff.

One trusts that even in our money-driven political system, their transparently self-interested nonsense will be firmly rejected. There is no reason why anyone needs to do anything at all about Social Security for a long time; as even Peter Orszag admits in the fine print. It just isn't a driver of the deficit.

The U.S. does need to reduce its spending on defense and it certainly needs to aggressively contain medical costs. But you do both of those the old fashioned way. In the case of defense, you stop plunging into wars and attend carefully to what actually is needed to defend America. In the case of medical spending, you end ‘fee for service’ schemes that reward endless tests and procedures and you vigorously pursue anti-trust and regulatory remedies. You don't simply cut Americans off from health care. It's ridiculous that we have ‘single payer’ for ailing banks, but not citizens. If you are worried about the deficit, just let tax rates rise back to the levels of the Clinton era, when growth ran far ahead of today's economy, and tax dividends, carried interest, and capital gains at the rates working Americans pay. And don't, absolutely don't, let American companies escape taxation by stashing their money abroad.”

6. "Strip-mining is not leadership." Fixers present themselves as magnanimous, responsible leaders doing what they believe is best for the country. But that’s a tough sell when you’re advocating policies that mainly benefit…yourself.

Economist Rob Johnson, director of the Institute for New Economic Thinking, shared his view of the Campaign to Fix the Debt in an email. As he put it, "strip-mining is not leadership":

“I believe that a convincing argument depends upon the demonstrated self-sacrifice of the leader offering a vision. This group does not appear to be doing something for the nation. They are doing something for their own self-interest (tax liability). There is confusion between: 1) what is good for business and therefore jobs, something we all should be concerned about; and 2) the personal benefit of CEOs based on who bears the burden of the debt reduction plan. This group does not seem to gain the credibility that comes from generous contribution through self sacrifice. As a result they will arouse great suspicion rather than inspire us as 'leaders' who are guiding the design of a just, productive and coherent society.

With all of the suspicion of leadership in America,  business, media, scholars and politicians have to lead in a credible way. This just looks like guys defending their self-interest in a dysfunctional period of our nation's history because elites take so much for themselves.”

It's no secret that the wealthy have done extremely well over the last several decades, ever since the Wall Street-driven financial crash that devastated millions of Americans. In 2010, the top 1 percent of U.S. families raked in as much as 93 percent of the country’s income growth, according to Emmanuel Saez, a UC Berkeley economist who looked at IRS data.

Which raises several important questions for Bowles, Simpson, Blankfein, Rattner & Co.: How much is enough? How far are you willing to tip the balance of income in the country toward the wealthy? What concern do you really have about the deficit, or for that matter, the future of America? Inquiring minds want to know.