Forget "The Walking Dead" and "Revolution." These National Geographic characters are truly ready for doomsday 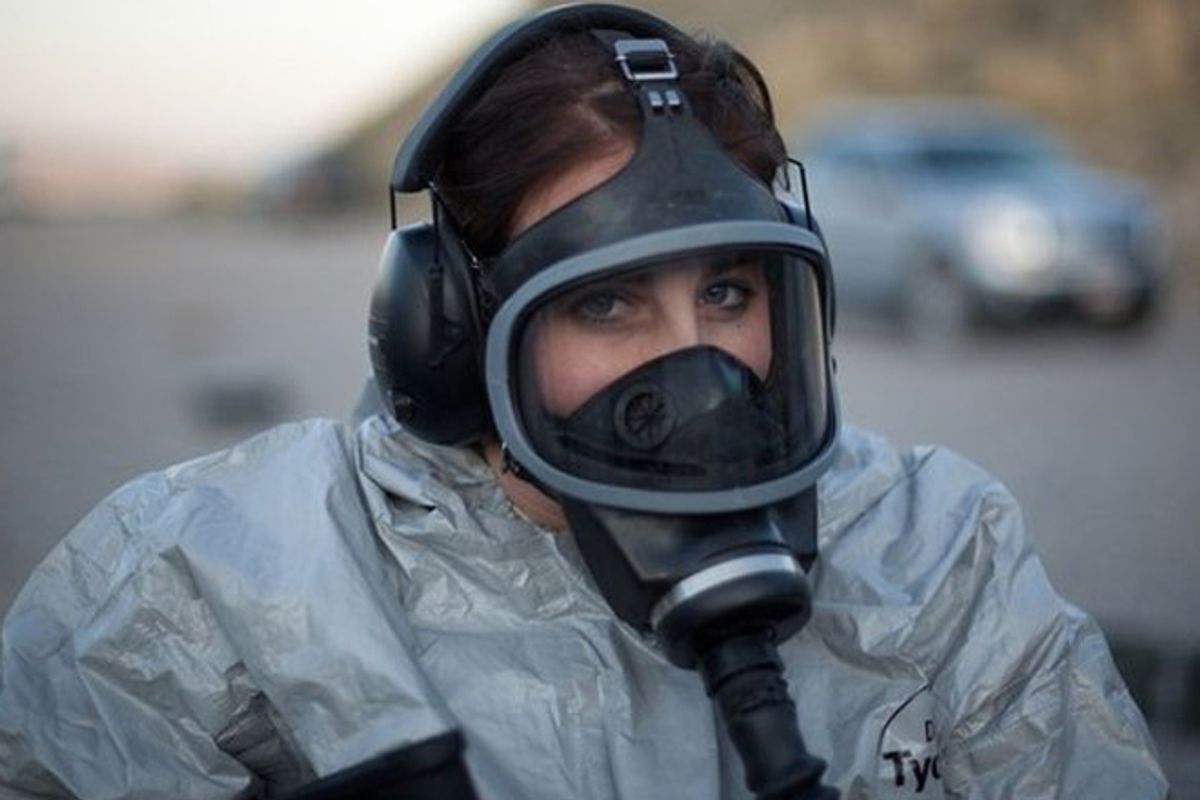 The envy was fairly palpable among the gathered “Doomsday Preppers” as the 25-ton, 10-foot-tall, 18-inch-thick doors swung open, leading into a huge, long-secret bunker in a West Virginia mountain.

Carved 720 feet into the hillside, at an untold cost to taxpayers, was a Cold War “relocation facility” built to fit every member of Congress (and an aide). The two-level, 112,500-square-foot facility, fully stocked and at the ready from 1961 to 1992, went out of commission only after it had been exposed by the Washington Post. Otherwise, it might be operating yet.

“Pretty awesome,” concluded Braxton Southwick, a spiky-haired former professional motocross racer who has prepped his family of eight for a terrorist smallpox attack. He’s armed them with bug-out bags and hazmat suits, but, alas, no bunker hideout. But if he had a bunker to hide in, this was certainly the way to do it; done with a level of paranoia and preparation the visiting Preppers could surely appreciate.

No wonder the historic Greenbrier Resort in White Sulphur Springs, W. Va., which houses the huge bunker beneath one of its wings, was chosen for Doomsday Preppers Weekend.

The event last month was planned by National Geographic Channel, whose “Doomsday Preppers” is its most popular show. A weekend press event allowed plenty of access to the prominent Preppers of Season 2, currently running Tuesdays. There were also a number of sessions for visitors to learn key Prepper skills such as archery, fishing, shooting, self-defense, Prepper cooking and the packing of bug-out bags. Bug-out bags are backpacks full of necessities meant to be at the ready the moment civilization collapses, when a Prepper needs to bug out, either to his preplanned bunker or just out to the woods.

The second season of “Doomsday Preppers,” which premiered a week after President Obama’s reelection, may lend extra urgency to those with an inordinate fear of the seated government, who have already been unnecessarily stocking their gun racks for fear the Second Amendment would be dissolved, signing petitions to secede, or looking to make good on those promises to leave the country in case of reelection. In presenting the show, the National Geographic channel likes to straddle a line such that like-minded paranoids can pick up tips for their own canned-food hoarding, while at the same time playing up the jokes that have targeted the show on everything from “The Colbert Report” to Mad magazine.

“Doomsday Preppers” steers away from the most extreme fringes, whose preparations and militia building may be tied to right-wing causes, racist groups or a biblical end of days. Indeed, the religious associations of a Prepper featured on the first season of the show, Scott Hunt, were left on the cutting room floor, he said. In some sort of consolation, his company, Practical Preppers LLC, has been retained for Season 2 to assess each Prepper's planning (scoreboards are big in male-targeted reality shows).

Hunt and his business partner Dave Kobler also made one of the coolest presentations of the weekend, demonstrating such MacGyver-quality practical knowledge as starting fires (instantly!) by touching a 9-volt battery to steel wool (why hasn’t anyone tried that on “Survivor”?). Other information, such as how to snare squirrels for meals, was more difficult to imagine as being necessary.

More compelling were the inexpensive devices that would purify puddles of water for drinking and especially the converter that turned the energy of a small fire into – get this — charging a cellphone. The most skeptical journalists stepped closer, asked Hunt to repeat the product name (BioLite) and watched him do that one again.

Preppers are used to being laughed at; indeed, they each imagine they’ll have the last laugh deep inside their individual bunkers as the world crumbles around them. But the advance of superstorm Sandy across the East Coast the weekend before had suddenly made these survival hints very relevant. Some reporters had flown in from homes still without power.

Characters from any number of pop culture hits, like “Revolution,” “The Hunger Games” and “The Walking Dead,” could have used some of the practical bug-out bag advice. Still, National Geographic’s Doomsday Prepper Weekend didn’t go the full distance: Reporters didn’t have to stay in tents, cook on makeshift fires or snare squirrels. The full amenities of the amusingly well-appointed (and garishly decorated) Greenbrier and its restaurants were instead made available. They even opened the resort’s bowling alley for late night games and beers on Saturday, despite the fact there will clearly be no bowling after Doomsday. And then there was that massive bunker right on site. What was once a state secret was now a part of the resort’s many offered amusements, alongside laser tag and the spa. The 90-minute bunker tour costs $30.

On TV, “Doomsday Preppers” is marked by its urgent tone, dramatic music and the sober, emphatic narration. It’s all often upended in the final scene, though, in which, for balance and a small measure of journalistic integrity, a disclaimer comes on to say, no, the likelihood of a terrorist smallpox attack, F-5 tornado, mega-earthquake, UFO invasion, or whatever the Prepper happens to be worried about, is extremely unlikely to ever happen.

In a way, it negates everything that comes before it and is the kind of information they probably should have shared with the subjects before they put their extreme preparations on film for what we are now told is a needless gesture. Show producer Alan Madison said he fought against the disclaimer, unsuccessfully in the end. But the network felt it had to have its journalistic integrity. “This is the National Geographic Channel,” says executive producer Kathleen Cromley.

But the Doomsday Preppers Weekend had a bit of that last-minute turnabout in reality as well. After a weekend of preparation, shooting, fishing, self-defense and at one point taking up bows to shoot arrows at bleeding zombie targets, a final discussion of the supposed Mayan-predicted Dec. 21 apocalypse featured John Hoopes, an associate professor of anthropology at the University of Kansas.

Hoopes is being featured in another set of National Geographic specials this week, one titled “Mayan Underworld: The Real Doomsday.”

His message, as declared in White Sulphur Springs, was clear:  “Everything you know about the Mayan end of the world is wrong.”

The Mayans never predicted the end of the world, he said in his Greenbrier session; and the ancient calendar often used as proof is adapted from a whole other culture, that of the Aztecs. The Mayan people didn’t disappear either, Hoopes says. “Six million Mayans live today – as many people as there are Jews in Israel.” They’ve simply dispersed to other countries.

Calculations that Dec. 21, 2012, is the end of the world is a relatively recent notion that’s been furthered by mostly New Age writers in the past few decades and “promoted by a mass media to tell a story people find compelling,” Hoopes says. A mass media, presumably, that also includes the National Geographic Channel. Hoopes recited a list of failed doomsday predictions from recent decades, from the Hale-Bopp comet to the Harmonic Convergence to the seemingly regularly scheduled supposedly biblical ends of days. He dismissed Preppers to such a degree that he even placed Charles Manson in their realm. After all, he spent his time on the Spahn Ranch preparing for a race war he was trying to incite.

So at the end of this weekend-long focus on Preppers, I asked this pillar of doubt whether any of this doomsday prepping we’d spent so much time talking about was actually necessary.

And just as in the episodes where the terse, contradictory truth is blurted out only in the final moments, the Doomsday Preppers Weekend was over.

“Doomsday Preppers” airs on Tuesdays at 9 p.m. ET, on the National Geographic Channel.