For two decades, I couldn't stop thinking about my ex-boyfriend. Then I discovered he wasn't even alive 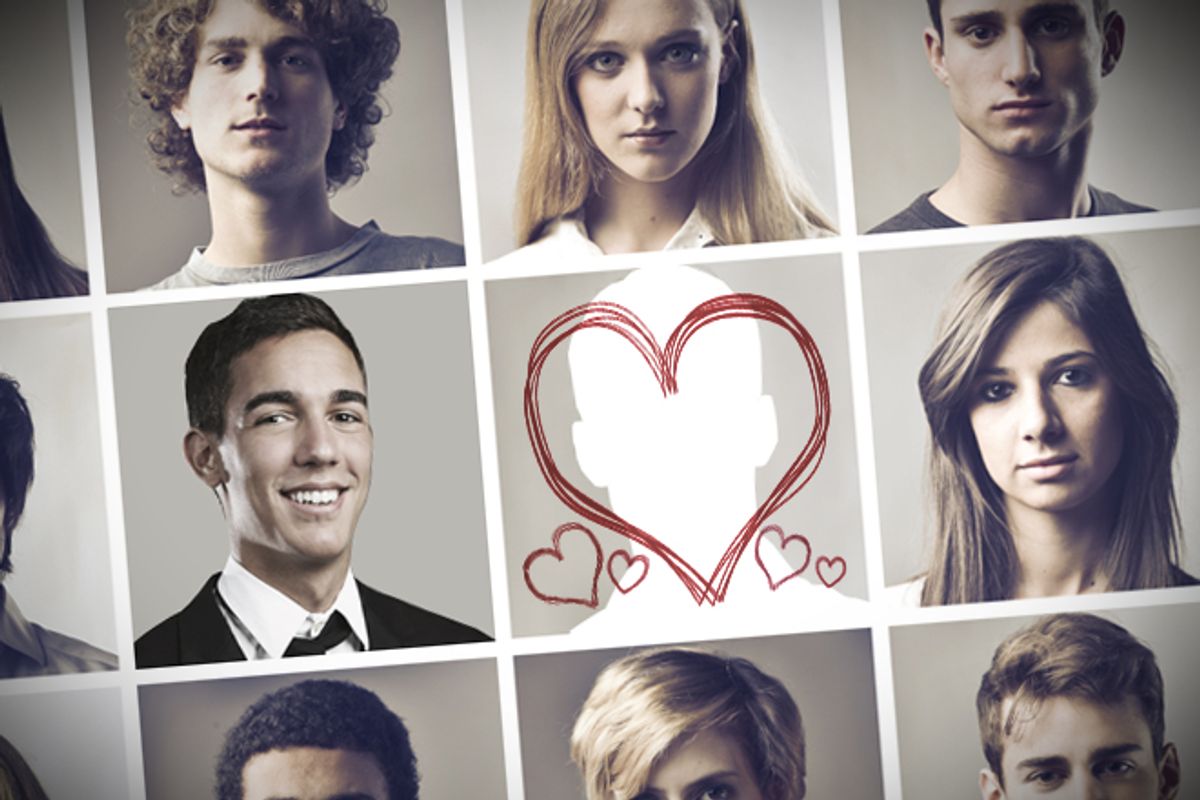 This is the first installment in a new personal essay series, "Searched and Destroyed," about the unexpected lessons of Google.

We were going to get married the following year, and I was going to continue writing while he got his new business off the ground, and we were going to be deliriously happy. That was the plan – well, that was my plan. His plan, if he ever had one, remained a mystery to me, and the whole romance faded away in a series of incremental withdrawals and muted hurts. He didn’t know he’d bewitched me with his playful intelligence, his unfairly beautiful body, his dogged search for higher meaning. He had no idea that he was the first man I’d ever genuinely loved, or that I wanted to have 10 kids with him. Worse, maybe he did know. Maybe he knew and didn’t care. I never could figure that out.

The relationship ended after just over a year, not terribly long by relationship standards. Except that it never really ended – not for me, anyway. We went separate ways, to be sure, severing all ties. But I continued to wonder what had become of him, and I filled in the blanks with the only resource available to me: my imagination. This was before Facebook, even before the Internet, and so I envisioned him doing it all – working hard, reading good books, grappling with life’s inevitable sorrows, and, yes, dating women whose faces and breasts were nicer than mine.

It’s not that my life without him was empty. On the contrary, it was filled with more joys, disappointments and surprises than I ever could have predicted. I eventually met and married a loving soul mate, had two delightful daughters, made a go of my writing pursuits, even learned how to drive a Segway. Yet, instead of making me forget about the lover who’d slipped away, my fully engaged life made me even more curious about him. Were our lives progressing in some mystically aligned way, like parallel pushpins in a road map? Or was he out nightclubbing when I was changing diapers? Fighting off an existential crisis when I was finally coming into my own? Synchrony or divergence? I had no way of knowing.

I’ll admit that I occasionally speculated what would have happened if we’d stayed together. Once, when I was stuck in the middle of a manuscript and feeling low about it, I daydreamed myself into a fairy tale in which his sweet and patient encouragement inspired me to create a masterpiece. The problem was that I felt even worse when I returned to reality, where there was neither a completed manuscript nor a flawless partner to congratulate my efforts.

Still, I never actually missed him, not in the sense of wanting to pick up the phone, not even when I was still single. In my daydreams, after all, it was just as easy to cast him as a villain who so demeaned my creative trials that I gave up on the manuscript altogether. Suddenly, a temporary bout of writer’s block wouldn’t seem so bad. Suddenly, those prettier, bustier women could have him, for all I cared.

But the real reason I didn’t lament his absence was that I knew we’d see each other again. One day we were going to bump into each other at some check-out aisle, and, just like that old Dan Fogelberg song, we were going to slip into my car and regale each other with our life stories. The encounter would be bittersweet and cathartic, a pushing aside of pedestals and sour grapes, an end to the wondering.

Except, that’s not what happened. Last month, after listening to a BBC dramatization of the affair between Pulitzer Prize-winner Edith Wharton and journalist Morton Fullerton in the early 1900s – an affair whose bliss and torment so evoked my own long-ago romance – I succumbed to impulse and Googled him. There in the pixelated certitude of the Internet, I found the truth. I found his archived death announcement.

He had died far too young. The short obituary didn’t say how. It didn’t say much at all. And since I have no Kevin Bacon-esque connections with anyone in his circle, I do not know why he died, or whether he was happy beforehand, or anything else about him.

“Does it really make any difference that he’s dead?” asked a well-meaning male friend. My eyes must have glazed over in bafflement because he immediately elaborated, “Don’t get me wrong, it’s awful that he died. But he wasn’t in your life even when you thought he was alive. Is anything going to change now that you know he’s dead?”

“OK,” I responded, “let’s go with that. Suppose your girlfriend is an astronaut, and she just accepted an invitation to travel through a wormhole. Tomorrow, you’ll say goodbye to her forever, but every day you’ll know she’s out there somewhere, doing what she loves. Compare that to how you’d feel if she got flattened by a Mack truck.”

For two decades, I’d half-adored, half-loathed this man. For anyone who has not experienced those dueling emotions, let me tell you that love and hate don’t cancel each other out. They combine to form pain. I hadn’t grasped that fact before, but now, knowing he was permanently and unalterably gone, the sadness rushed in, and I didn’t know what to do with it. Please understand: I wasn’t channeling Ethan Frome or Newland Archer, Wharton’s protagonists who wanted to run away with someone they couldn’t have. I simply wanted to mourn. I’d once loved this man. I’d once believed, however naively, that I’d get the chance to talk things over with him one day, to get the all-important closure I’d been missing. Now all bets were off.

I needed to grieve, yes, but who could I turn to for a shoulder – my husband? The friend who thought this news was no big deal? My sister, who’d tried to talk me out of dating him in the first place? No, there was only one person who would understand my plight without passing judgment, and that was Edith Wharton herself. Miraculously, my small public library carried “The Letters of Edith Wharton.” I snatched the thick book off the shelf and took it home to devour.

In her copious, often plaintive letters to Mr. Fullerton, Ms. Wharton opened the stable doors to my stifled thoughts and feelings. Edith put words to the giddy beginnings, tumultuous middles, and desolate endings we’d both encountered. Without shame, she wrote, “No, I won’t give up, no, I won’t believe it’s the end, no …!” only weeks after penning, “The moment my eyes fell on him, I was content.” With candor bordering on self-deprecation, she revealed the despair springing from unreciprocated passion: “I’m so afraid that the treasures I long to unpack for you, that have come to me in magic ships from enchanted islands, are only, to you, the old familiar red calico and beads of the clever trader …” She even acknowledged the void that lingers when the sex is withdrawn: “And sometimes my body cannot forget your body, and then I am miserable.”

But the real clincher, the thing that patently secured Edith’s place as my most simpatico and admired historical figure, was the way she understood the agony of the endless wondering. “Anything on earth would be better,” she noted in July of 1908, “than to sit here and wonder: what was I to him then?” That single line from a century-old missive was the hand that pulled me from the whirlpool. I understood that all the time I’d spent wondering what he was up to, I’d actually been wondering whether he’d ever cared about me. The gnawing mystery wasn’t how he spent his time, but how I’d registered, if at all, in his heart. It anguished me, subtly but deeply, not to know. Edith got that, and by writing it down in a handful of words, she bound us as sisters across time and space.

As if that weren’t enough, Edith gave me an additional, final gift: hope. By the time 1910 rolled around, she could see past her present misery: “The not understanding is the one unendurable and needless thing. All the rest, dear, my heart has turned to beauty – and will one day turn to peace.” She might as well have written: “Face it, Shirley, you’re still going to think about this guy, and you’re never, ever going to hear him tell you how he felt deep down. Eventually, you’ll be OK with that. You’ll be all right, and so will I.”

I probably wouldn’t have believed this message coming from anyone else. But if Edith Wharton says it’s so, then who am I to argue? So these past few weeks, I’ve been trying to find the beauty in that old failed relationship, plumbing my memory for any mementos that might be a prelude to peace. I remind myself that we were both happy for a while – that there was a perfect, albeit brief, time when I gave him happiness, and he cared enough to respond in kind. I try to accept the fact that this is all I can know. I struggle.

I’m a pretty slow learner in the ways of the heart, so I’m not expecting serenity to light upon me any time soon. But Edith reminds me that peace can be found, even after so much life and love has drifted away.

Have a story about a shocking Google discovery for "Searched and Destroyed"? Send your completed essay to Sarah Hepola, shepola@salon.com

Shirley Vernick is the author of "The Blood Lie," a novel based on the only reported blood libel in America.