Kate's middle is in royal pain

Word is Kate Middleton's "throwing up a lot." News flash: Childbearing is a difficult, messy business 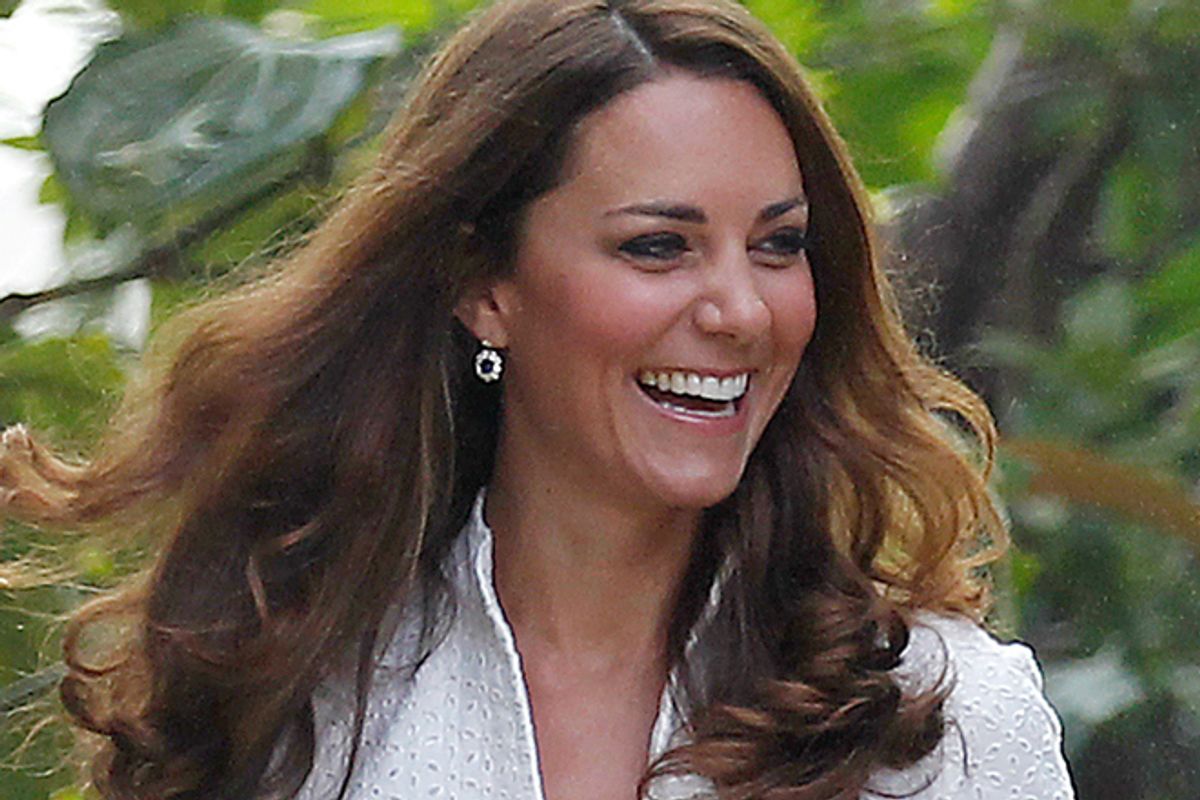 "The whole world is watching my stomach." That's what she said. She said it before Twitter and TMZ, before the E! network and OK! magazine. It was 30 years ago, and the woman who uttered those words, Princess Diana, was pregnant with her first child. Now, that child she carried is about to have a child of his own, and the mother of that baby has already raised the bar for what it means to have the world's most-watched stomach. It's a royal pregnancy unlike any other. And as such, it's a unique opportunity to demystify the experience, and for Kate Middleton to become the future queen who proves that growing a baby is no fairy tale.

The announcement Monday that Catherine, Duchess of Cambridge, was expecting was one that royal watchers have been waiting for since before Middleton even married Prince William. Over two years ago, in the couple's first official interview after their engagement,  ITV's Tom Bradby eagerly begged, "Do you want lots of children?" (Subtext: "How soon can you two breed?") But the news that Kate was "finally" knocked up came with an unexpected and worrisome side note. The mother-to-be is currently in a London hospital for hyperemesis gravidarum, severe nausea and vomiting that affects a small percentage of pregnant women. Or, as Time explains about what's happening to the woman who is carrying a future monarch, "She’s throwing up. A lot."

The announcement of the Duchess's full condition was no doubt one the palace had to make – there's too much media scrutiny on the royal family now to expect a hospitalization to go unnoticed. It's a far cry from the long-ago era when Elizabeth was feeling the effects of her pregnancy with Prince Andrew, and she simply withdrew from some of her public duties until an official announcement.

Middleton, in contrast, has already proven an eminently down-to-earth figure for a less rarefied age. She's a commoner from a self-made family, a woman who openly lived and traveled with the future king before she married him, and who is comfortable enough in her body to sunbathe topless like a European.

Whatever you may think of the usefulness of the royal family, they still are looked to as role models. Queen Victoria changed modern childbirth by electing for chloroform during the deliveries of her last two children, challenging the religious notion that pain was women's punishment -- and bringing pain relief to labor. Over a century later, Princess Diana became a model for natural childbirth and brief postpartum hospital stays.

So even if you're the type who loves a good eye roll whenever a topic as seemingly meaningless as the royal family crops up, it actually is important that the pretty lady who gets to wear tiaras and ride around in carriages has been barfing. It's important that there are conversations happening now about that. It gives a context for other women's experiences; and it provides an opportunity for people to learn something, as evidenced by the current glut of stories explaining what hyperemesis gravidarum is — and that is not in fact a Harry Potter spell.

Somewhere in all the endless stories we'll be deluged with in the coming months about what she's wearing and how big she's getting and how soon she's thin again, there's a chance to open minds and share stories, to push past the prejudices of those who think pregnant women should just "suck it up." And do what? Not faint or throw up? Because it's weak or unladylike? Why should Middleton — or any other woman — be expected to always keep calm and carry on? She shouldn't and she won't. And because of that, there's a chance to acknowledge that we're all human and that life is all about the viscera, a chance to subvert the absurd cult of flawless motherhood with the reality of pain and puke. Because she said, "The quest for perfection can leave the individual gasping for breath at every turn." And Princess Diana was right.