No one "banned" Ann Coulter from Fordham. Why would O'Reilly besmirch a Catholic school like that? 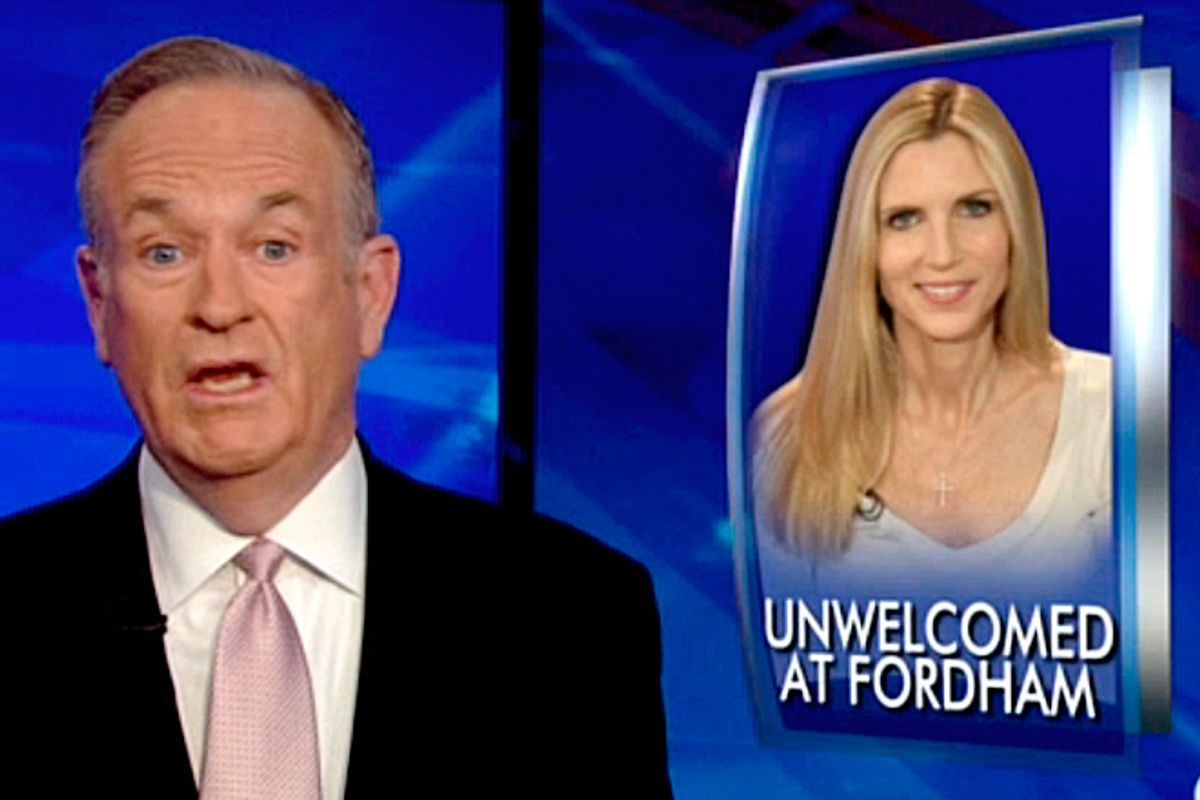 The lies came thick and fast when Bill O'Reilly took on the Ann Coulter at Fordham University story, one month late, on Monday night.

Here's what happened: Fordham College Republicans invited Coulter to speak. Fordham president Joseph McShane wrote a letter lamenting their choice but supporting their right to make it. The College Republicans wrote a letter announcing they'd earlier "rescinded" the Coulter invitation, before McShane's rebuke, and lamenting that he hadn't spoken to them before going public with his reservations. Dissident Fordham College Republicans wrote letters complaining that their club had canceled Coulter, but none of them claimed she'd been "banned." I wrote about all of this Nov. 9 when it happened, but it was a Friday night, and O'Reilly was probably otherwise occupied.

But since O'Reilly obviously missed it, here's what McShane said at the time:

Student groups are allowed, and encouraged, to invite speakers who represent diverse, and sometimes unpopular, points of view, in keeping with the canons of academic freedom. Accordingly, the University will not block the College Republicans from hosting their speaker of choice on campus.

And as I wrote at the time:

[McShane] blasts Coulter’s message as “hateful and needlessly provocative — more heat than light” and says “her message is aimed squarely at the darker side of our nature.”...He laments the lack of “maturity” shown by his young campus Republicans in inviting the provocateur Coulter. But he says he trusts the Fordham “community” to model “the power of decency and reason to overcome hatred and prejudice.”

Just moments into his segment, there was time for O'Reilly to turn it around, and to say the reason he "didn't know" Fordham banned Coulter was that it hadn't happened. But alas, O'Reilly got the story wrong, from start to finish. He quickly turned the segment over to brain- and conscience-free sidekick Jesse Watters, who works cheaper than Bill-o and thus eats up the clock without eating up a lot of money. Which works for everyone at Fox, I guess.

Watters simply mocked Fordham students: Students who didn't like Coulter but couldn't say exactly why; or who even didn't know who Coulter was; students who failed to protest Princeton ethicist Peter Singer's Fordham appearance, even though they didn't know who he is, or what he believes, or even that he'd been on campus. It was like shooting fish in a barrel, if the fish were conveniently placed in the barrel of a loaded gun. You know: O'Reilly's idea of a fair fight.

The debacle should have been embarrassing for the prime-time host of a top-rated if now flailing news show. But O'Reilly reunited with Watters in the studio, after Watters did all the work on the segment, however poorly, and they yucked it up on set. "I asked McShane … Mr. McShane or Dr. McShane or whatever you are … to come on the show," he said. Actually, Bill, we call him Father McShane, for the record. But O'Reilly said he couldn't get the university president to appear because, of course,  "you can't defend this."

In fact, you can't defend it,  because it didn't happen. But you can explain the facts, as McShane did in his original letter to campus, and in his follow-up letter praising the college Republicans for voluntarily rescinding their invitation to a woman who's gotten rich on hating and baiting, rather than on reason and discourse.

It's sad that the supposedly Catholic O'Reilly sided with Coulter and slandered a great Jesuit university, and it's even a little bit surprising, though it shouldn't be. It's all just business with O'Reilly, and a less lucrative business every day. I'm hoping Fordham College Republicans have the conscience, and the courage, to tell O'Reilly, and the world, that he got the story wrong.