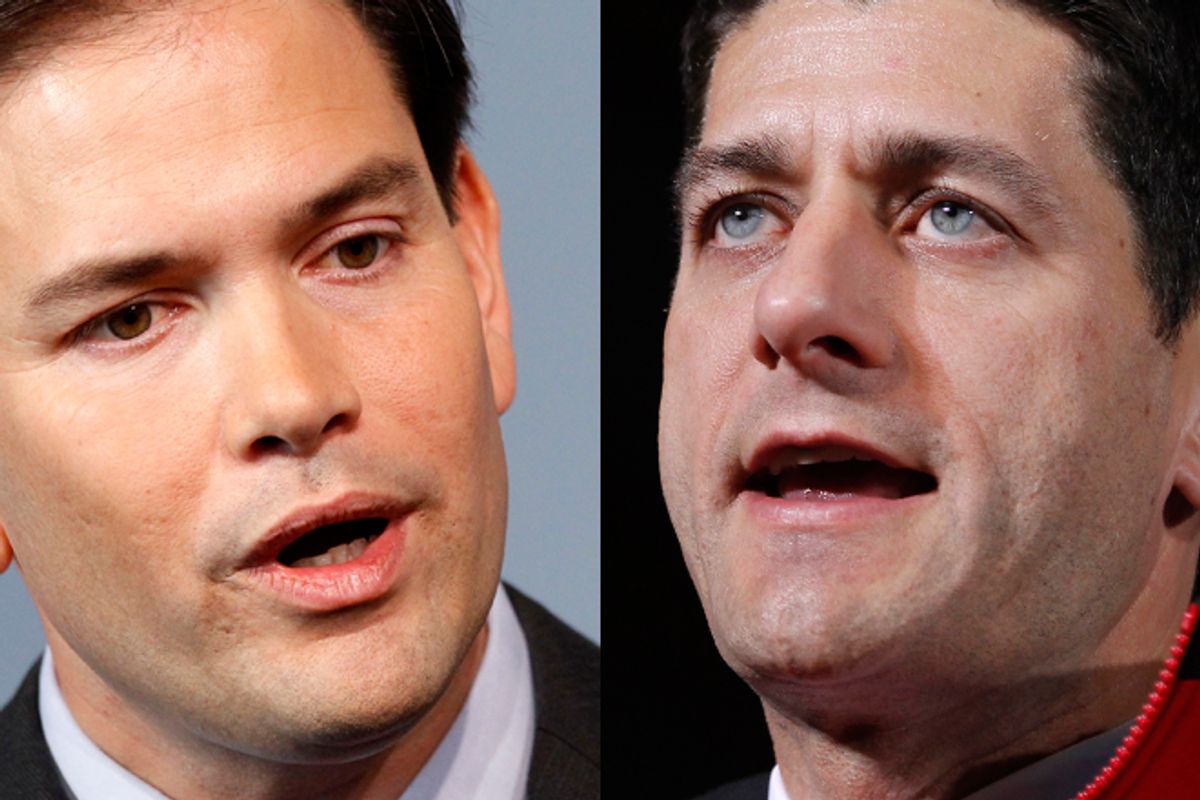 Marco Rubio and Paul Ryan are "reinventing" themselves, along with the rest of their sorry party. They care about poor people now, everyone! So stop saying they don't. They're giving speeches and everything!

The Atlantic's headline is, "Are Republicans Getting Serious About Income Inequality?" As always, one is correct to silently add a "no" to the question posed in the headline. The Atlantic's David Graham is at least investigating the question rather than simply accepting the supposed Republican rebranding as important and genuine, as Politico does. (The Politico piece is written by, you guessed it, Jim VandeHei and Mike Allen.)

At a dinner benefiting a foundation named for regressive taxation policy pioneer Jack Kemp, Rubio and Ryan both repeatedly paraphrased the lyrics to "We Take Care of Our Own" by Bruce Springsteen in order to prove that Republicans do not explicitly support the feeding of the lumpenproletariat directly to wolves.

Rubio, who has no legislative record to speak of, is currently inventing some sort of higher education policy designed to telegraph the idea that he cares about the middle class. But don't worry, he's not going pinko on us:

Senator Marco Rubio of Florida said the party should pursue policies aimed at allowing “the poor to rise into the middle class – not by making the rich people poorer, but by making poor people richer.”

That sounds like precisely the sort of meaningless platitude Ronald Reagan himself could've delivered. Though I do believe Rubio means it when he says the bit about being dedicated to ensuring that rich people do not get poorer. That's long been the one true mission of the conservative movement. A new direction, indeed.

Did you know, by the way, that Paul Ryan had a secret plan to not constantly alienate and insult all non-rich Americans, but the Romney campaign refused to allow him to pursue it? It's true, and all was revealed this week at the Jack Kemp Foundation Dinner, where Ryan shrugged off his ill-fitting suit to reveal the dust-stained overalls of a man of the people, while singing "Joe Hill's Last Will." From VandeHei and Allen's preview:

Ryan, 42, will kick off his own drive to redefine the party — and himself — as the pre-dinner keynote speaker before 300-plus conservative faithful on the same stage, detailing his thinking on how people of all classes can rise up economically and improve socially. Top Republicans tell us Ryan tried to push his ideas for a more creative “war on poverty” during the presidential campaign but was muzzled by nervous Nellies at Mitt Romney’s Boston headquarters who didn’t see an immediate political payoff. So Ryan seethed when the “47 percent” tape emerged, convinced that the impact was worse because the campaign had no record on issues relating to inclusion or poverty, exacerbating the out-of-touch image that the hidden camera cemented.

I believe that Rubio is ideologically pliable enough to shift leftward, if that looks to be the right move for whatever he's planning next -- he doesn't strike me as a politician with particularly deep convictions -- but anyone who buys that Paul Ryan is making a substantive change in his beliefs should be laughed out of the business of political journalism. The man is a product, top to bottom, of the conservative movement. As an avowed Randian, he should support income inequality as the natural order. A Ryan-led "war on poverty" would be an actual war, on the impoverished.

When you read about people like Rubio and Ryan -- and Jon Huntsman and Bobby Jindal -- calling for a "new direction" for their party, keep in mind that these people advanced as far as they did because they are stalwart and ardent conservatives. One might think a party should look to new figures for new ideas, but the Republican Party has been so conservative for so long that they simply don't have non-conservative would-be leaders to advance. Any ideas they put forth to alleviate poverty or shore up the middle class will be products of the same movement that brought us supply-side economics. What Ryan and Rubio are working on is finding a new way to sell the exact same policies they've always supported. And when Ryan votes against raising taxes on the wealthy and for raising the retirement age for working people, he'll say he's doing it for all Americans.