Moms to Congress: Don't throw families over the "fiscal cliff"! 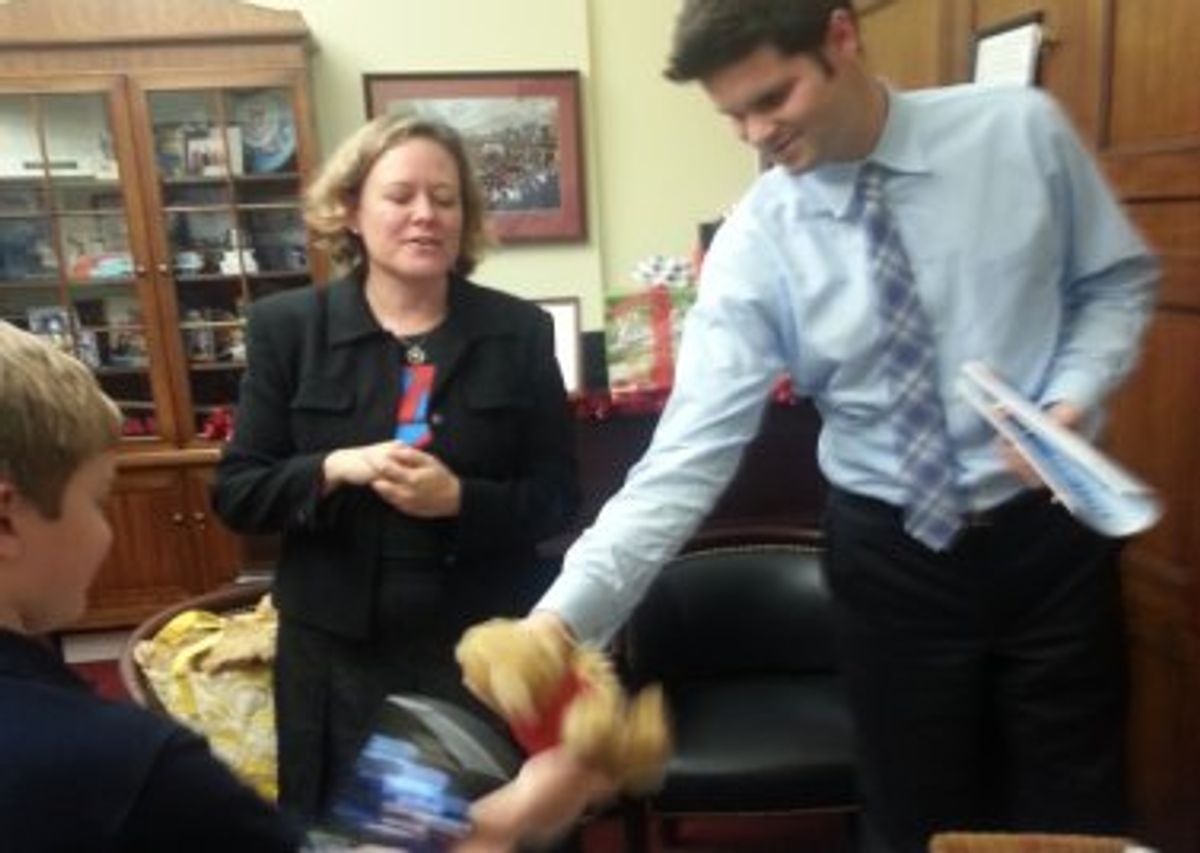 Today, as members of Congress negotiate a budget to address the so-called fiscal cliff, families are taking a stand. Women, mothers, and their families are descending on Capitol Hill to deliver teddy bears, petition signatures and personal stories to lawmakers to send the message that moms and kids can’t “bear” more than their fair share.

Wealthy CEOs have joined together in the much-maligned "Campaign to Fix the Debt" to argue for lower taxes on the rich and cuts to the social safety net, but they are being met by a counterforce of ordinary women trying to work and raise their families. MomsRising, a grassroots organization that advocates for family-friendly policies including paid family leave and an end to wage discrimination, is taking action to tell America about how the fiscal cliff will impact them. They are gathering in Washington, DC to deliver to congressional offices stories about the financial burdens facing families across the United States, as well as thousands of signatures calling on Congress to end the Bush tax cuts for the wealthy. Members will also be making over 190 deliveries of a short book of fiscal cliff stories to the in-district offices of their local representatives in 40 states.

“If Congress doesn’t act, massive across-the-board cuts could cost millions of jobs and hurt healthcare, education, aid to state and local governments, and vital programs that kids and families depend on, such as Head Start, child care and food safety,” said Kristin Rowe-Finkbeiner, executive director and co-founder of MomsRising. “Even worse, some lawmakers are trying to use this high-stakes moment of legislative complexity as an opportunity to attempt to sneak in drastic cuts to Medicare, Medicaid and Social Security.  Women and mothers are urging their representatives in Congress not to throw America’s families over the fiscal cliff in order to protect tax cuts for the top 2 percent among us."

As everyone seems to know except Lloyd Blankfein, the Wall Street-driven recession has had a devastating effect on the nation's families. Over 46 million Americans are currently poor, and the poverty rate among American children is now 22 percent. That's the highest since 1993. Curtis Skinner, director of the Family Economic Security program at the National Center for Children in Poverty at Columbia University, emphasizes the importance of the safety net to vulnerable families:

"The federal and state social 'safety net' has helped keep these millions of new poor from outright destitution during the Great Recession and its aftermath. Since 2007, participation in the Medicaid public health insurance program has grown by 8.8 million. Participation has risen by more than 18 million in the food stamp program that helps support family food budgets. The number of low-income kids receiving free school lunches has risen by three million."

Contrary to popular belief, the social safety net is not just for the poor; it has become critical to the struggling middle-class. Research from the Center on Budget and Policy Priorities reveals that the poor are no longer the primary beneficiaries of the government safety net -- they have been replaced by middle-class folks contending with relentless economic insecurity.  According to the MomsRising Web site, the group does not wish to see taxes raised on middle-class moms and families to protect tax cuts for millionaires and billionaires.

Poll after poll has demonstrated that Americans do not want cuts to vital social programs as part of a fiscal cliff deal. The latest AARP poll shows that 70 percent of U.S. adults age 50 and older oppose changes to Medicare and Social Security during negotiations. A recent Washington Post/Kaiser Family Foundation poll finds that both Democrats and Republicans oppose cuts. On the other hand, over 60 percent of Americans support raising taxes on incomes of over $250,000 a year.

Burning question: Will Congress listen to Americans who want a decent future, or to financiers interested only in their own bank accounts?