"The Mindy Project": Mindy's got a beef with midwives

"30 Rock" and "Parks and Rec" send up health trends from the perspective of a zany liberal. "Mindy's" just nasty 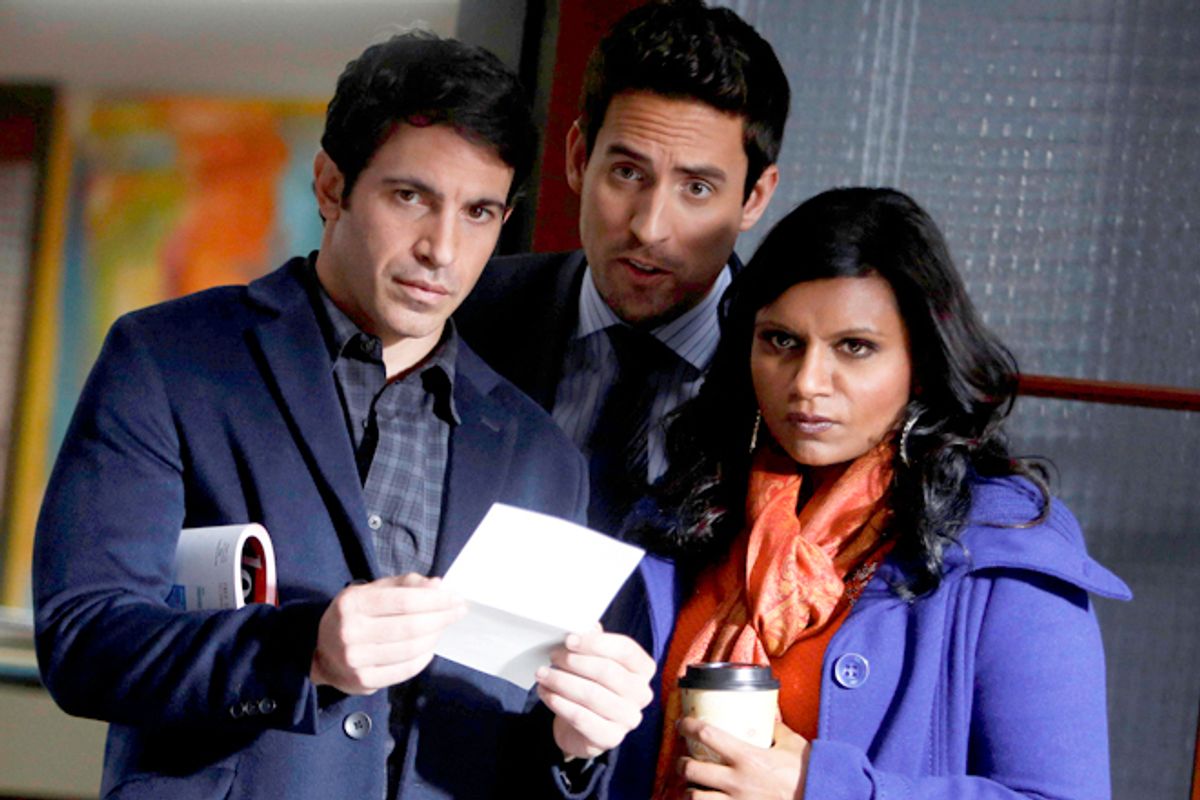 What does Mindy Kaling have against midwives? Something! On last night’s episode of “The Mindy Project,” two smooth-talking, Zen-having male midwives (I don’t have the stats to back me up here, but I’d bet whatever you've got that men do not make up a significant percentage of midwives in this country) began poaching patients from Mindy Lahiri’s practice. Mindy’s male colleagues tried to retain their patients in a bro-ish and counterproductive way: by calling pregnant women attractive and offering them a discount. Only Mindy could stop the defections, and she did so by storming upstairs into the midwives’ gong-having, holistic-themed offices and scaring her patients into sticking with the doctors. “If you are a healthy 22-year-old, that baby is going to fly out of you no matter who delivers you,” Mindy explained. “But if you’re middle-aged, obese, have diabetes, then who’s going to help you?” Because there is apparently no middle ground between being 22 and being high-risk, the patients, abashed, filed back downstairs.

I’m not particularly interested in fact-checking this episode — though some midwife might want to do that. Midwives may not be doctors, but they actually do get trained! They’re not necessarily anti-vaccination! But I do want to raise some numbers, to make a larger point about “The Mindy Project’s” still under development tone. In 2009 midwives delivered 8.1 percent of American babies. Most of these deliveries took place in a hospital (less than 1 percent of American births take place at home). Midwives are not a big fixture in most pregnant Americans’ lives— unless you’re a certain kind of American.

Midwife-assisted birth has, in the words of the New York Times, become a “status symbol” among health-minded, affluent, urban woman who are likely educated enough not to be bossed around by their doctors and probably belong to their neighborhood CSA.  In other words, midwifery is a well-meaning, runty and undervalued profession to pick on, unless you’re in a certain demographic, where it has become as omnipresent as crazy baby names. That demographic contains Mindy and, presumably, a good portion of the show’s hoped for audience, which is why midwifery, narrow as it may be, is a good premise for “The Mindy Project.” Its writers and audience have feelings about and experience with midwifery as practiced in swanky, upscale New York City offices.

But that just makes it all the more remarkable how dismissive “The Mindy Project’s” send-up of midwifery was. “The Mindy Project” is not alone in skewering the affectations of liberal, affluent Americans whose do-gooder instincts get stuck on their own and their offspring’s perfect health — it’s a great, if not the great, comedic subject of our particular Zeitgeist — but “The Mindy Project” was nastier about it than other sitcoms are. (Kaling's personal politics and tastes may make her more intolerant of this sort of BS to begin with.)

“30 Rock” eviscerates bougie trends all of the time, but from the everything-is-broken perspective of a zany, exhausted liberal. It might mock midwifery, but it would never champion doctors. (Could you do worse than Dr. Spaceman, anyway?)  “Parks and Rec’s” Chris Traeger is perhaps the ultimate goof on the self-betterment instinct, a man walking, talking and rushing toward perfection, though not necessarily happiness, at all times. Chris’ eating habits are regularly mocked by Ron Swanson, whose own all-meat-eating tendencies are teased by the show itself. But on “Parks” almost all mocking (except of Jerry) is done with love.

“Mindy,” on the other hand, could barely take this particular lifestyle choice seriously. I kept expecting a scene where one of the women was given excellent, if annoyingly new-agey care by one of the midwives (certainly, the male doctors at Mindy’s practice weren’t giving any). It didn’t happen. The midwives were little more than cutie quacks, and all it took to get the dummies — and also audience surrogates! — who abandoned Mindy's practice to come back was a not that convincing lecture. Mindy Lahiri is supposed to be smug, but in this instance "The Mindy Project" felt smug itself — so dismissive of anyone who would throw over Western medicine during childbirth, it didn't even mount a scathing counterattack.

When “The Mindy Project” started, Kaling said she wanted it to be like a female “Curb Your Enthusiasm." As "Mindy" has gone on, it's gotten sharper and funnier, but it's still having hard time seeing its heroine quite as caustically as it does everyone else around her. Is Mindy a jerk or is she right? Last night, she needed to be a little more of the former if she wanted to be the latter.