The photographer who captured a "doomed" subway rider, and did nothing to stop it, tries to paint himself as a hero 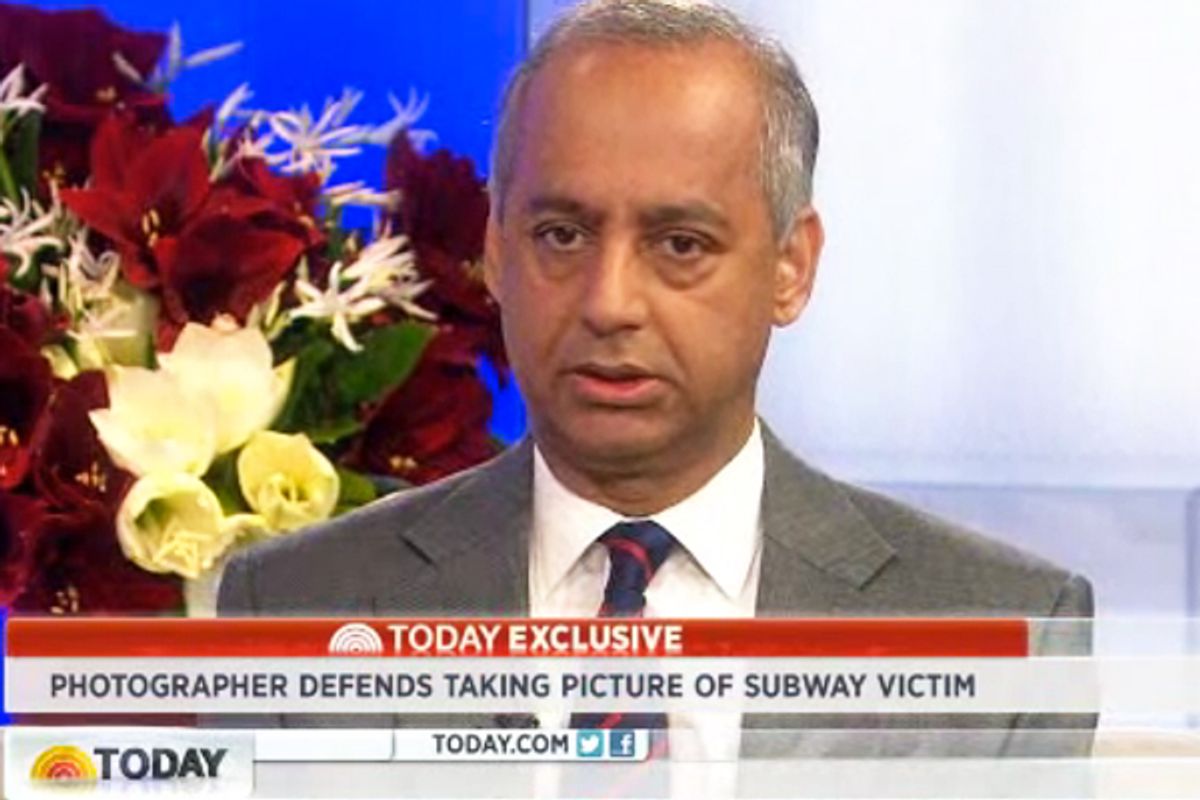 On Monday, 58-year-old Ki Suk Han was pushed off the platform at the 49thStreet subway station, and struck and killed by a southbound Q train. Don't you feel just terrible for the photographer who was there to turn the grisly crime into a cover story for the New York Post? This whole thing has been really harrowing. For him.

On Tuesday, the eternally tasteless Murdoch tabloid plumbed a new depth by running a cover image of Ki Suk Han helplessly clutching the edge of the platform from the tracks, his head turned in the direction of the oncoming car, with the headline, "DOOMED: Pushed on the Subway Track, This Man Is About to Die." Since then, both the image and the ethics of running it have been debated widely in other news outlets and on Twitter. In the New York Times, David Carr aptly condemned the horror of the image of "someone who is doomed, but still among us," saying the Post "milked the death of someone for maximum commercial effect … He ended up run over twice."

But the man who shot the photo, R. Umar Abbasi, sees it differently. In a stunningly self-aggrandizing Wednesday editorial by the "anguished fotog" who says "critics are unfair to condemn me," Abbasi insists he was using his camera not to document the fate of Ki Suk Han but to heroically attempt to save him. "I just kept shooting and flashing," he writes, "hoping the train driver would see something and be able to stop." Not sure how pointing a flashing camera at a speeding train signals the conductor in a more efficient way than yelling or waving your arms, but OK. He goes on to explain that he was "too far away to reach him," and that after the fatal blow, "a crowd came over with camera phones and they were pushing and shoving, trying to look at the man and taking videos. I was screaming at them to get back, so the doctor could have room because they were closing in on her; she thanked me."

It's not that a photographer has any more obligation to intervene in a dramatic situation than anyone else. Abbasi's first duty, like anyone's, is to himself and his own safety. It doesn't matter that he says, "The truth is I could not reach that man; if I could have, I would have." What's repulsive is that he then chose to not just sell that photograph, but then brashly write a story in which he's the guy using his camera to try to stop a train, in which he's telling other people taking pictures to use restraint, and getting thanked for it. How can Abbasi even walk around, with cojones that big?

A single potent image — whether it's brutal and gruesome or simply portends an imminent death – can galvanize the world. Death isn't always a private event and journalists illuminate the human condition, the human struggle, when they reveal that. The Post would like you to believe that's its noble intention here, as it prints praise from readers and tweeters who favorably compare the image to war photography, or the Pulitzer Prize–winning "1993 photograph of a starving girl in Africa with a vulture ominously standing behind her." By the way, the man who took that photo, Kevin Carter, killed himself a year later.

But this wasn't like the historic front page stories of the My Lai massacre, or of crowds lynching men in the South, or of Kent State: photographs of dead bodies that arrived with a demand for action and justice. And this wasn't like other photos of individuals who were, as the Post says, "about to die." There's none of the wrenching intimacy of David Kirby wasting of AIDS, or the drama of a falling Spanish Civil War soldier or an execution on a Saigon street. And though plenty of images of the "DOOMED" carry with them an inherently controversial aspect – raising questions about voyeurism and intervention – there's zero comparison between the Post's shamelessly tasteless stunt and the iconic image of a nameless man falling from the twin towers on 9/11, or Boris Yaro's haunting photo of a mortally wounded Robert Kennedy. They were pictures that told a bigger story about a major news event. They had something to say about life. What does R. Umar Abbasi have to say, aside from how great he is? What does the Post have to say, aside from the fact that an apparently disturbed man pushed a commuter toward his death on Monday afternoon? Journalism without humanity is just exploitation. And the New York Post without a soul is just the New York Post.